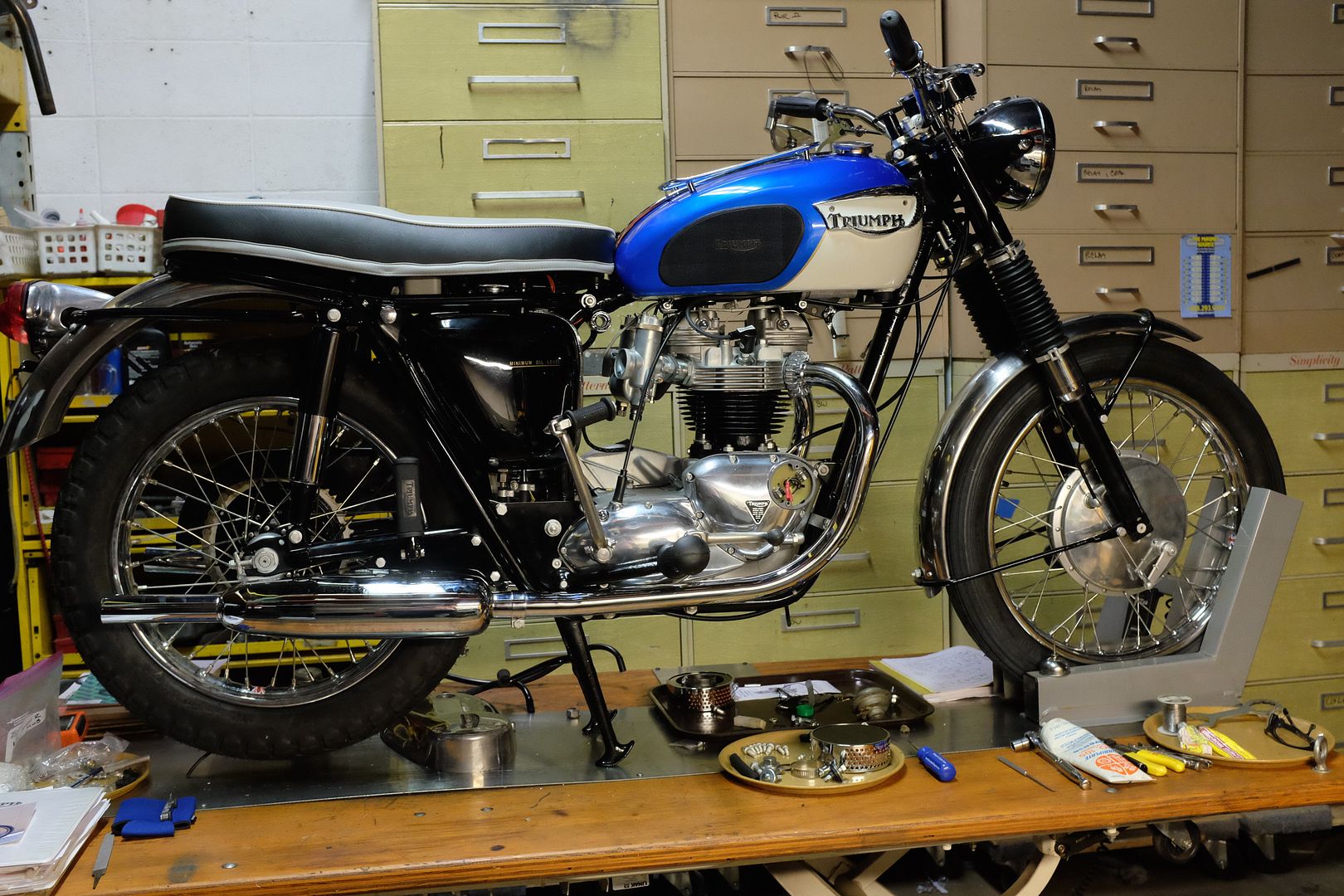 Thanks guys, she is looking good. So close... I spent a quiet day in the shop last week and most of yesterday working on my Bonnie. Cleaned and installed the oil tank, polished and install the gearbox cover, cables, chain, chain guard (what a PITA), battery, exhaust system, foot pegs, inspected and synchronized the carbs, and started on the electrical. There was a massive annual car show yesterday in downtown Winona and I entered my Gold Star just so I could park it in front of the shop while I worked. Dozens of people stopped in Skip’s shop while I tried to work, so I lost a lot of time chatting, but had a great time. I’ve got a busy week but will try to finish as soon as possible so I can start her up.

Here’s what’s left to do: finish wiring, install Boyer ignition, set timing, install air cleaners, swap the temporary carb cables for correct ones, polish and install primary cover, add fluids, clean the tank one last time, add gas, and then fire her up. I cannot wait to ride this bike.

Looking great Jon! I stopped by Skips yesterday and had a look.

DTT BOTM WINNER
Thanks Bootsey.
I am getting closer! I set the tappets, installed and timed the Boyer ignition and installed new bulbs for the idiot lights. She has spark. Tomorrow I should be able to finish wiring, clean the tank, add fluids and fire her up. 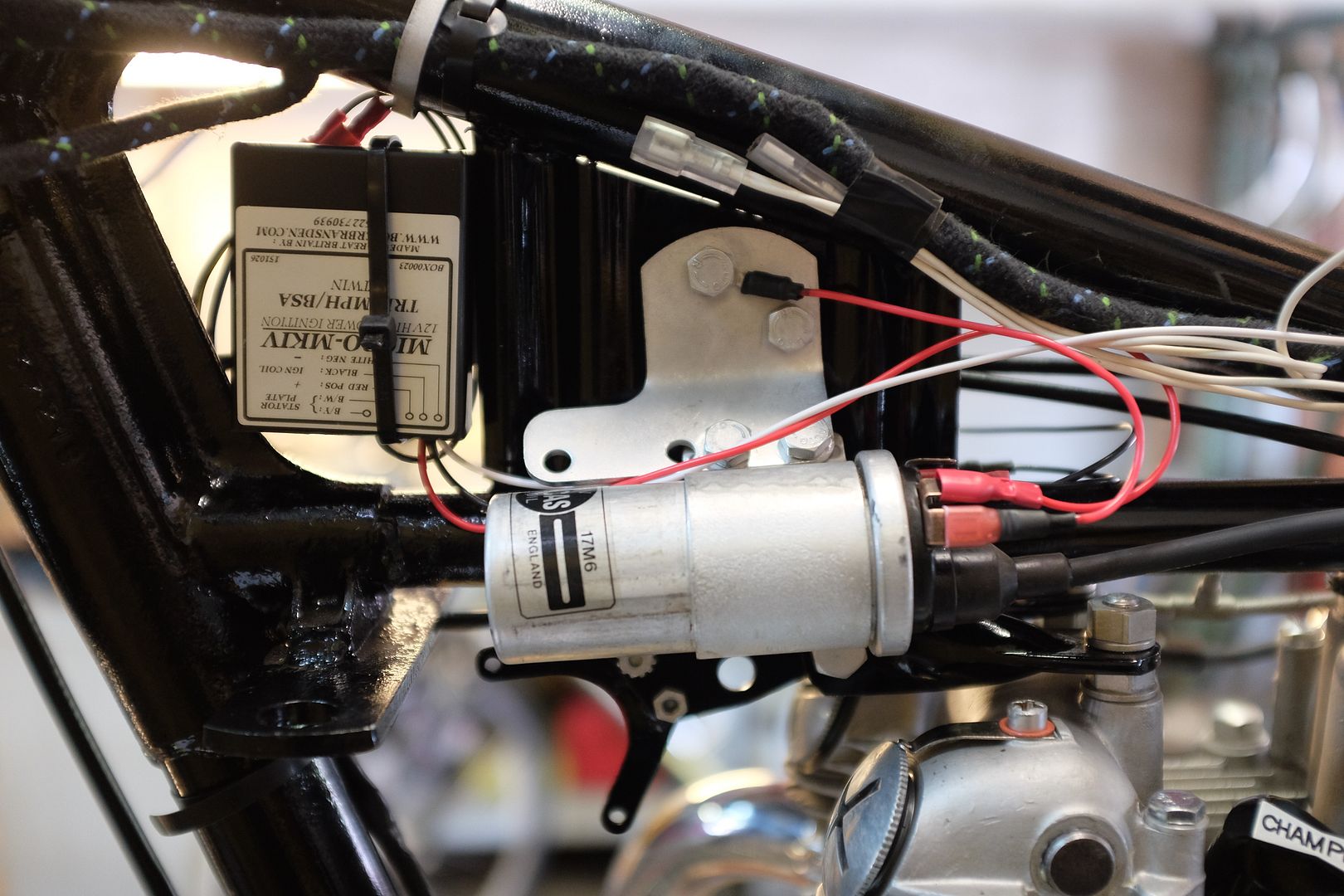 swan said:
Tomorrow I should be able to finish wiring, clean the tank, add fluids and fire her up.

My self-esteem just got a HUGE boost.

I've been criticized no end for using automotive type crimp-connectors on some of my builds; I was U.S.Navy trained on PROPER crimping techniques, so I KNOW they are secure.

Now that I see some in one of YOUR builds, I feel much better.
S

DTT BOTM WINNER
GP, these are the connectors which came with my Boyer ignition. The rest of my wiring harness I soldered Lucas bullet connectors.

F'n -A dude looks awesome! My tank and fenders are going off for paint this week. I hope my bike ends up looking as good as yours....

Be sure to video the first start up... if you'd checked all the boxes it should fire right up. That's a great feeling when a build starts first couple of kicks.

Did you stick with stock carbs? Mine are pretty nasty and the slides don't look especially great... I'm likely to just go with a new set of Amal Premier carbs and be done.

3DogNate said:
Did you stick with stock carbs? Mine are pretty nasty and the slides don't look especially great... I'm likely to just go with a new set of Amal Premier carbs and be done.
Click to expand...

I'm always in the market for reasonably priced donor/core Amals, when the time comes.

grandpaul said:
I'm always in the market for reasonably priced donor/core Amals, when the time comes.
Click to expand...

I probably take them apart in the next couple of weeks and give them an ultrasonic cleaning and make a real assessment of them more than the initial glance I gave em a few months back.
S

DTT BOTM WINNER
Thanks guys, after messing around with used Amal carbs with unknown histories on several bike projects, I simply bite the bullet and buy new ones, they are much better than they were made originally. 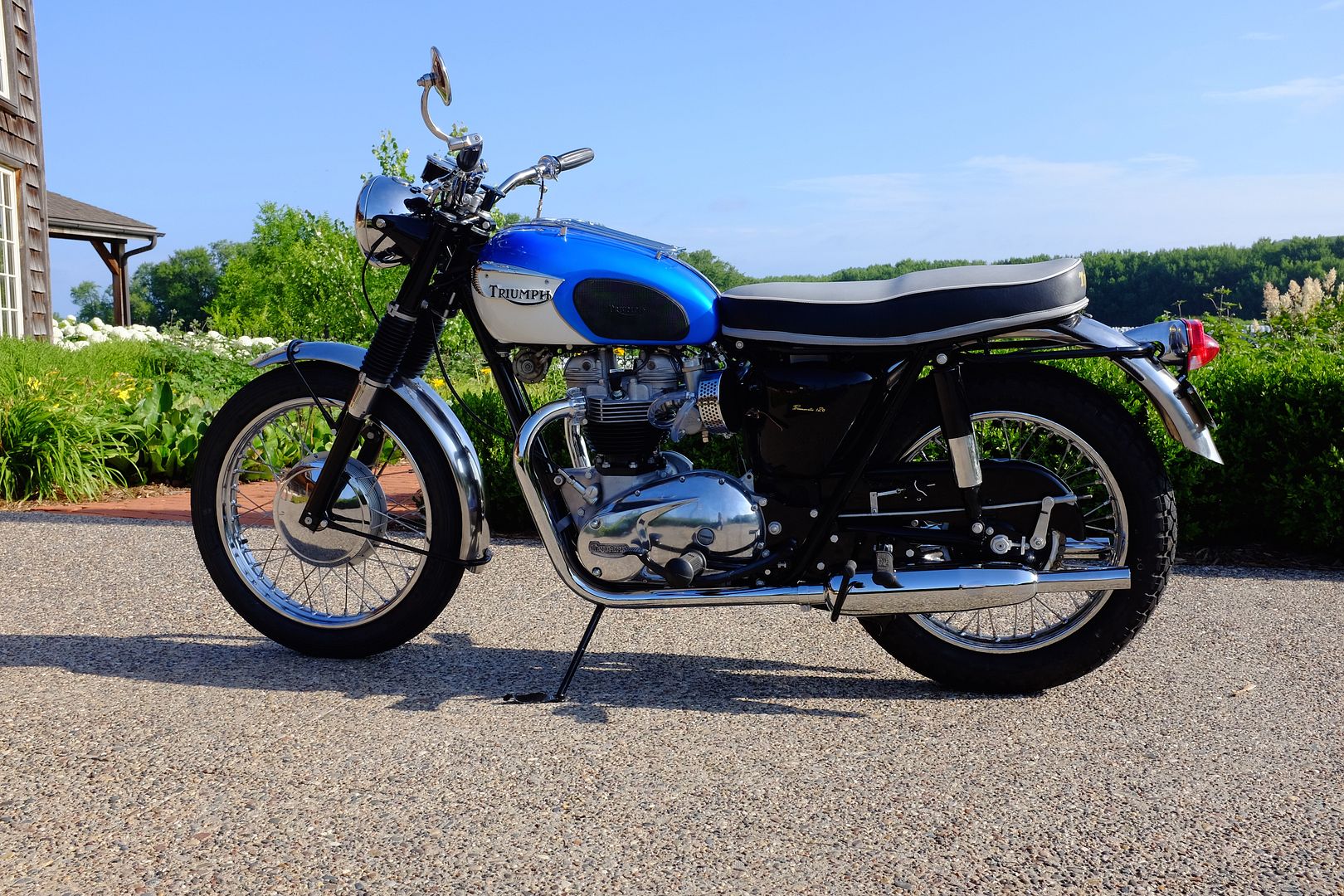 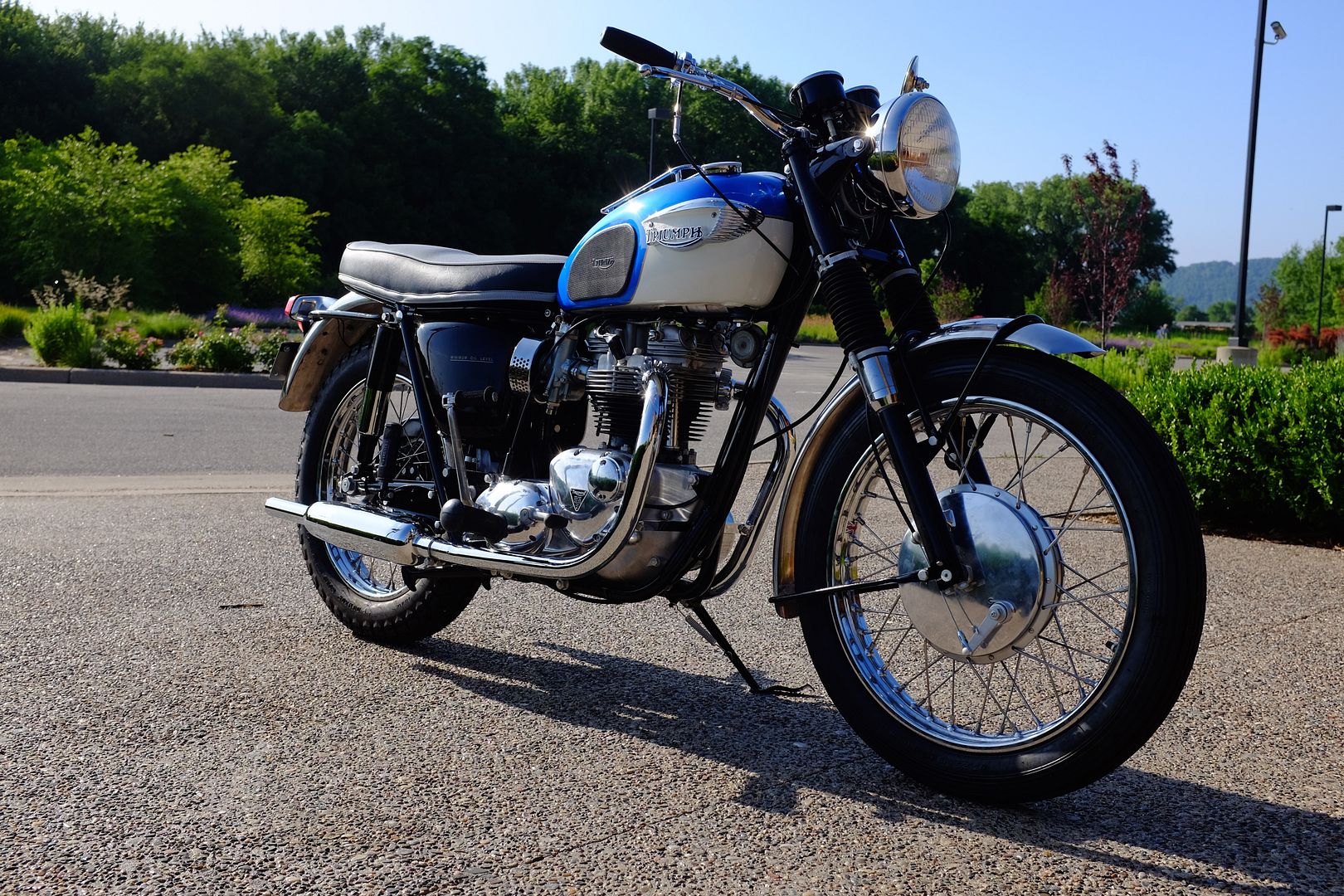 Fired her up for the first time two nights ago and rode her for the first time yesterday. Wow, all that time, hard work, and money was worth it. She now starts on first or second kick, idles well and really pulls hard. What a joy to ride and I rode her to work this beautiful morning. 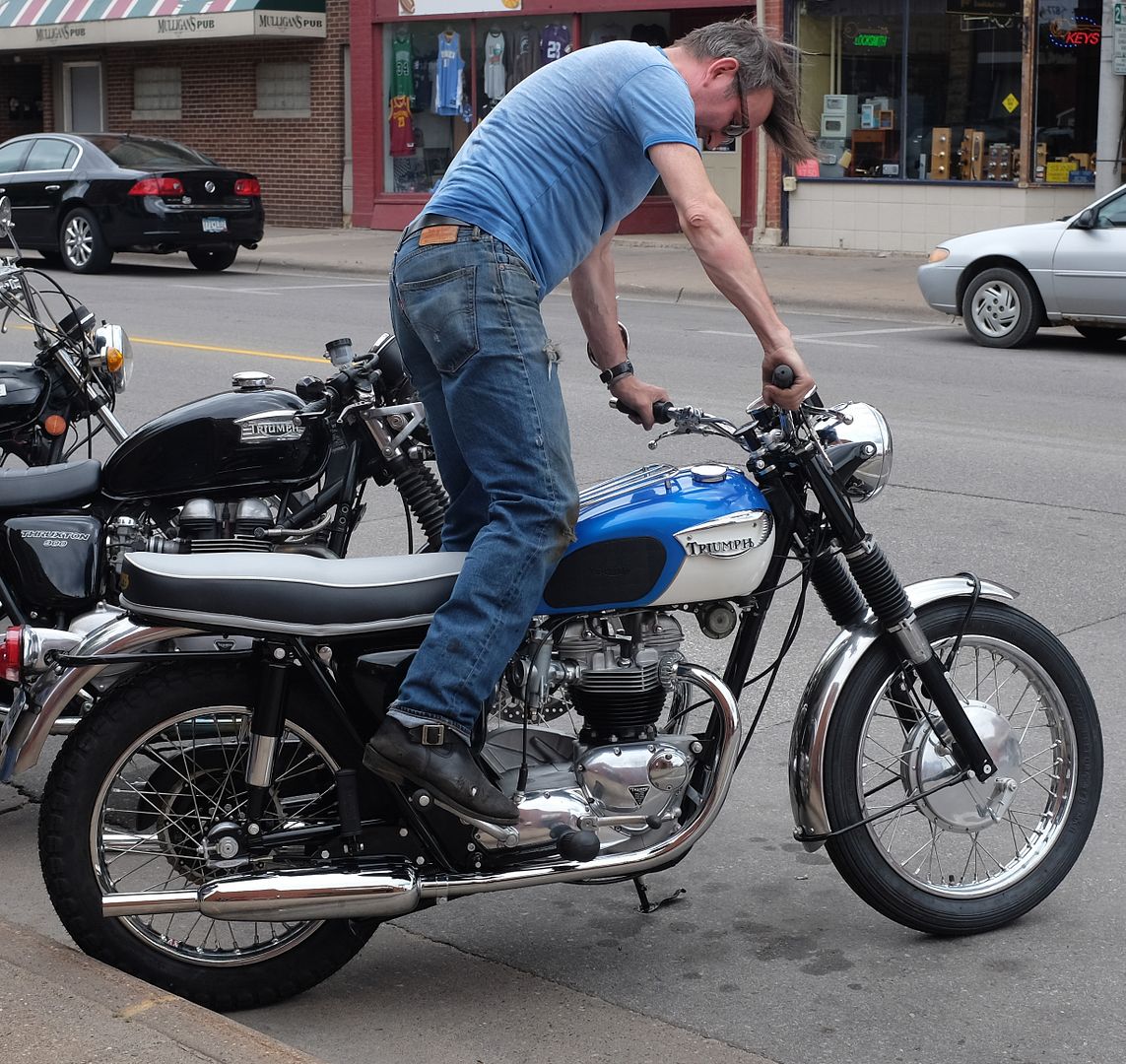 She fought me hard on the final details. After much frustration with the battery carrier and side cover, Skip and I realized it was too low and had been modified. I folded the tops of the carrier back to how it was originally, and everything fit the way it was designed. Skip loves wiring and went over my loom a few times, soldering, crimping and testing all the connections and all the electrical works as it should. Thanks man. The 2 into one cable system is frustrating to say the least and so is the cable bend in to the top of the carbs. The throttle cable routing took quite awhile to get right, so as not to raise the idle. There is not a lot of room under the tank. At times like this, I am glad I bought new Amal carbs, fuel line, and petcocks. They all work well. The motor, primary and gearbox are drip free (so far) but the left fork is weeping oil at the bottom. The clutch cable (new) is sticking and needs to be lubed. 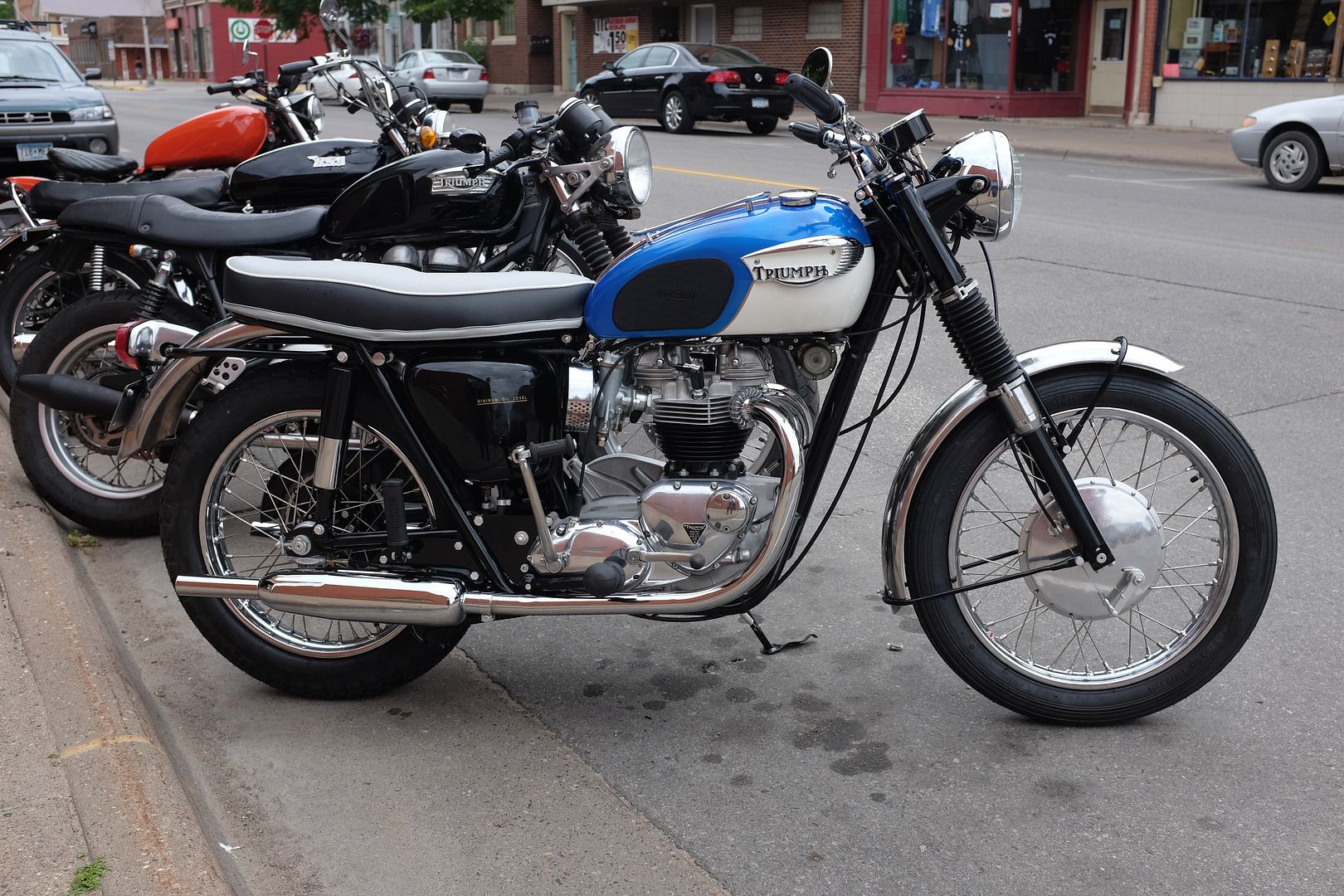 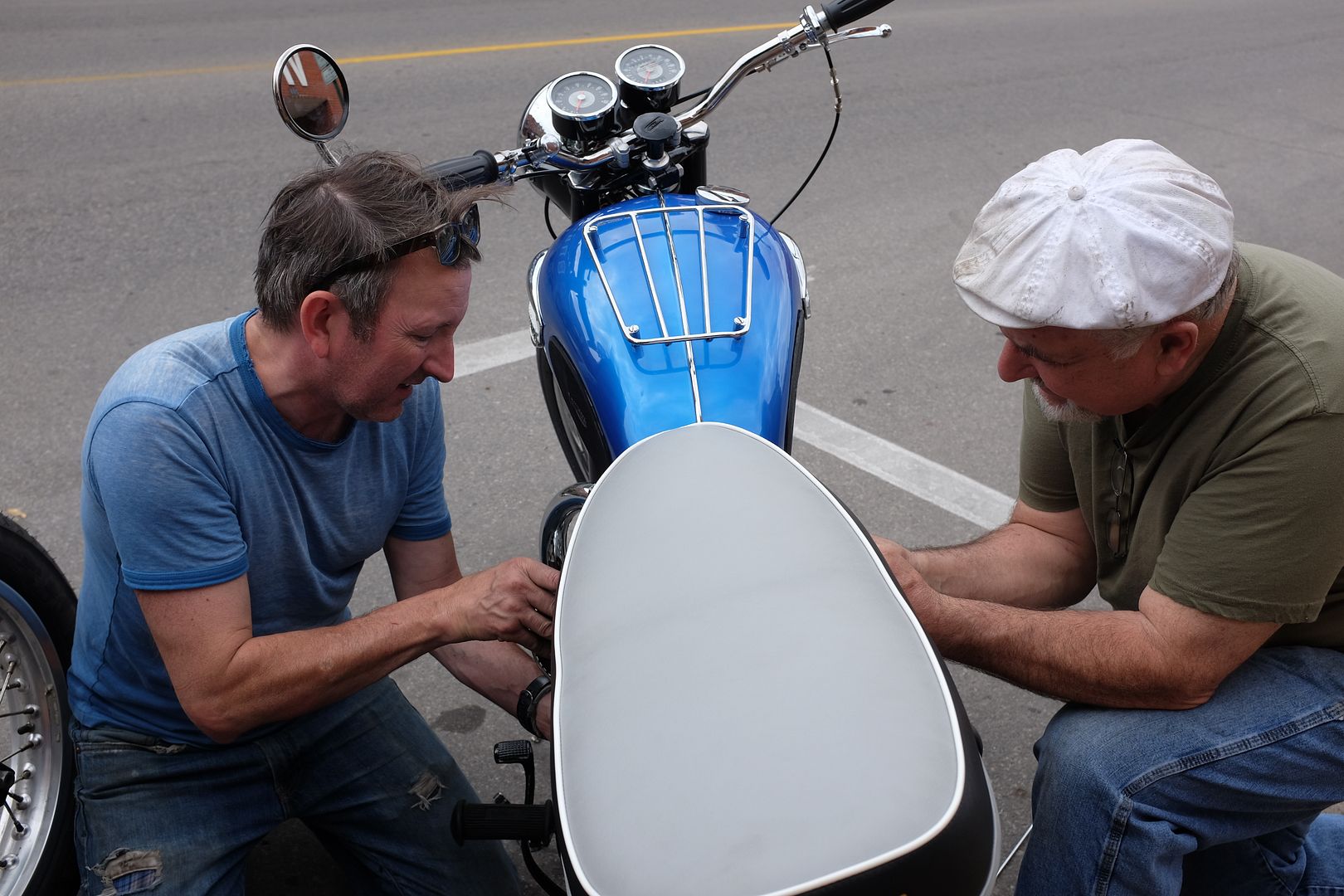 Skip (right) and I setting the air mixture on the carbs.


I am going to put on more break-in miles, fettle, go over all the nuts and bolts, recheck the tappet clearances, timing the ignition again, retorque the cylinder head, change the oil, etc. I have been riding clip-on handlebars for 15 years straight and it is a very strange sensation to be sitting upright on a motorcycle. I am still getting used to the upright European bars and have not quite found where I want the bars and control levers. The blade levers may not last too long on my bike and I may switch to the solid cast Amal type.

Anyways, thanks all for the encouragement and support during this build, it really helps. This motorcycle has special and personal meaning to me so I am keeping it for life. Time to put on some more miles….

Ride, ride, ride, then ride some more. She's a keeper for sure.

Actually, it'll do rather well!

DTT BOTM WINNER
The more you ride it, the better it'll get. Excellent work..paid off for sure, the bike is stunning!

DTT BOTM WINNER
Beautiful bike mate great thread. When you end up with a keeper you know you hit the jackpot , enjoy the miles and the attention you gonna get with the old trumper ,look forward to ya next project.
S

DTT BOTM WINNER
Awww, thanks guys...
I hit my first 50 miles last night with no issues other than a blown fuse. I had a 15 amp fuse when the books say 30 amp fuse. I plan to change the oil, rinse the oil tank, check the tappet clearances, retorque bolts, etc tomorrow. She is running really well, the gearbox 'snicks' cleanly up and down through all the gears, and is an absolute pleasure to ride. I have a couple days off with great weather this weekend so I will be out as much as possible. Here are a couple of before and after shots: 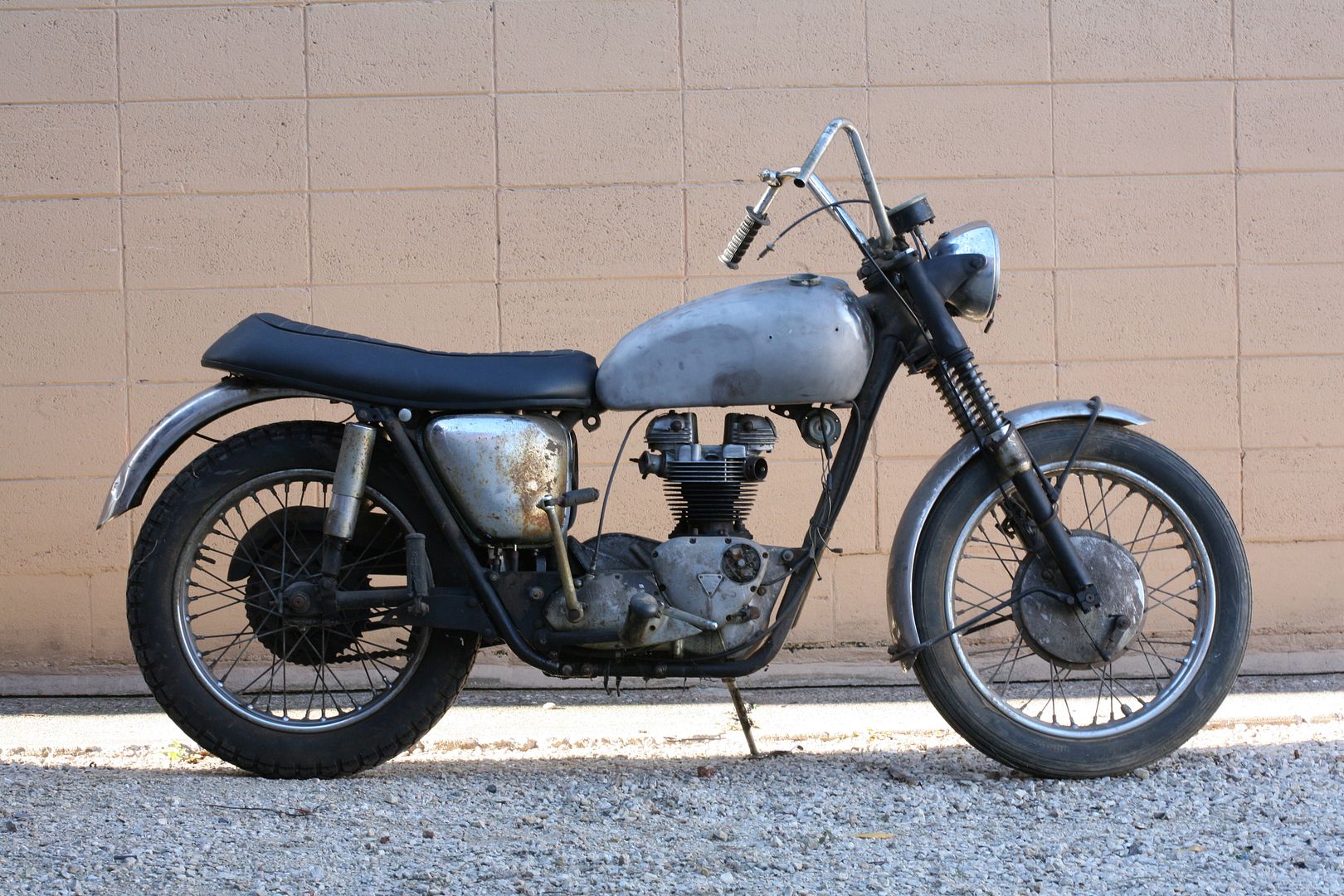 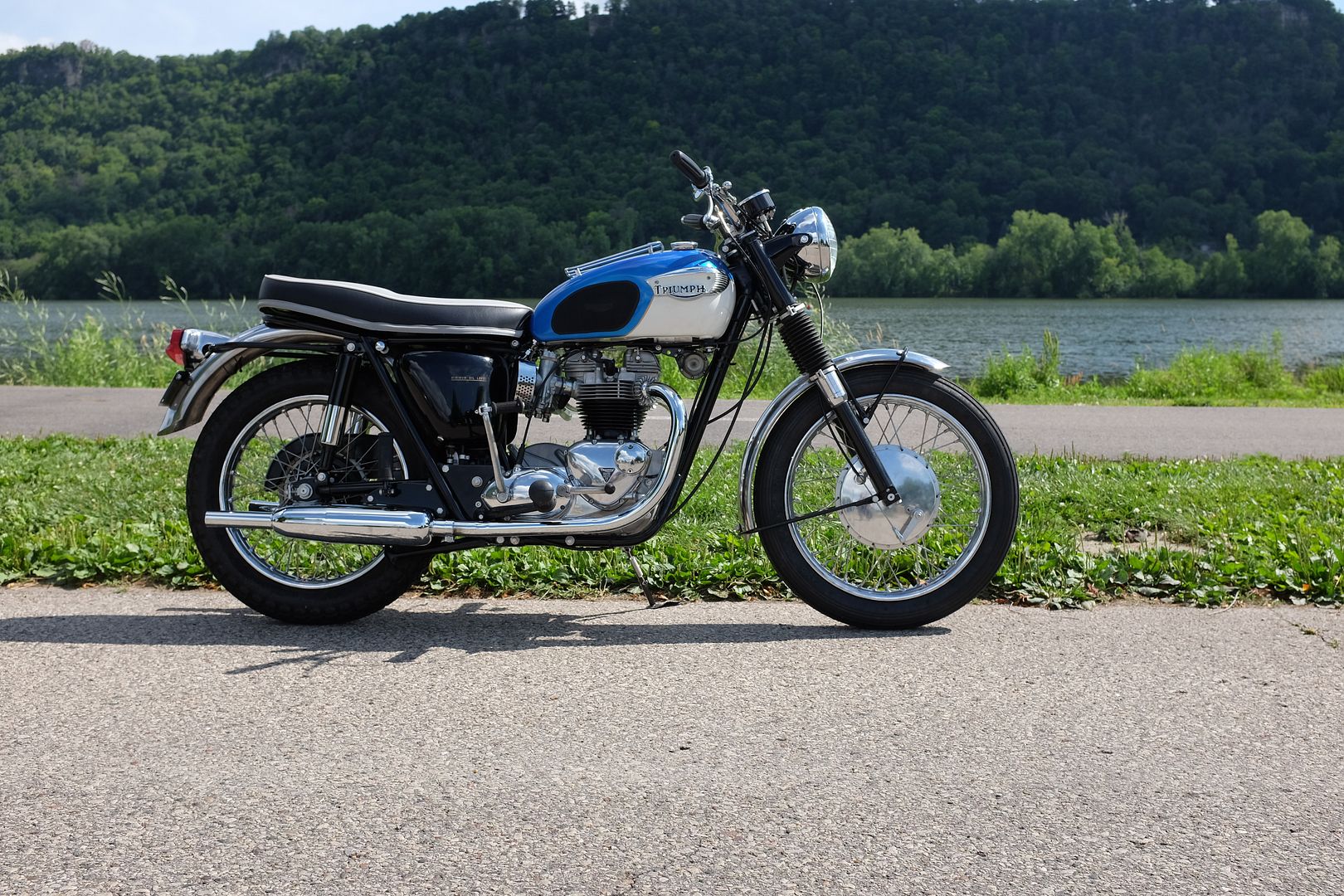 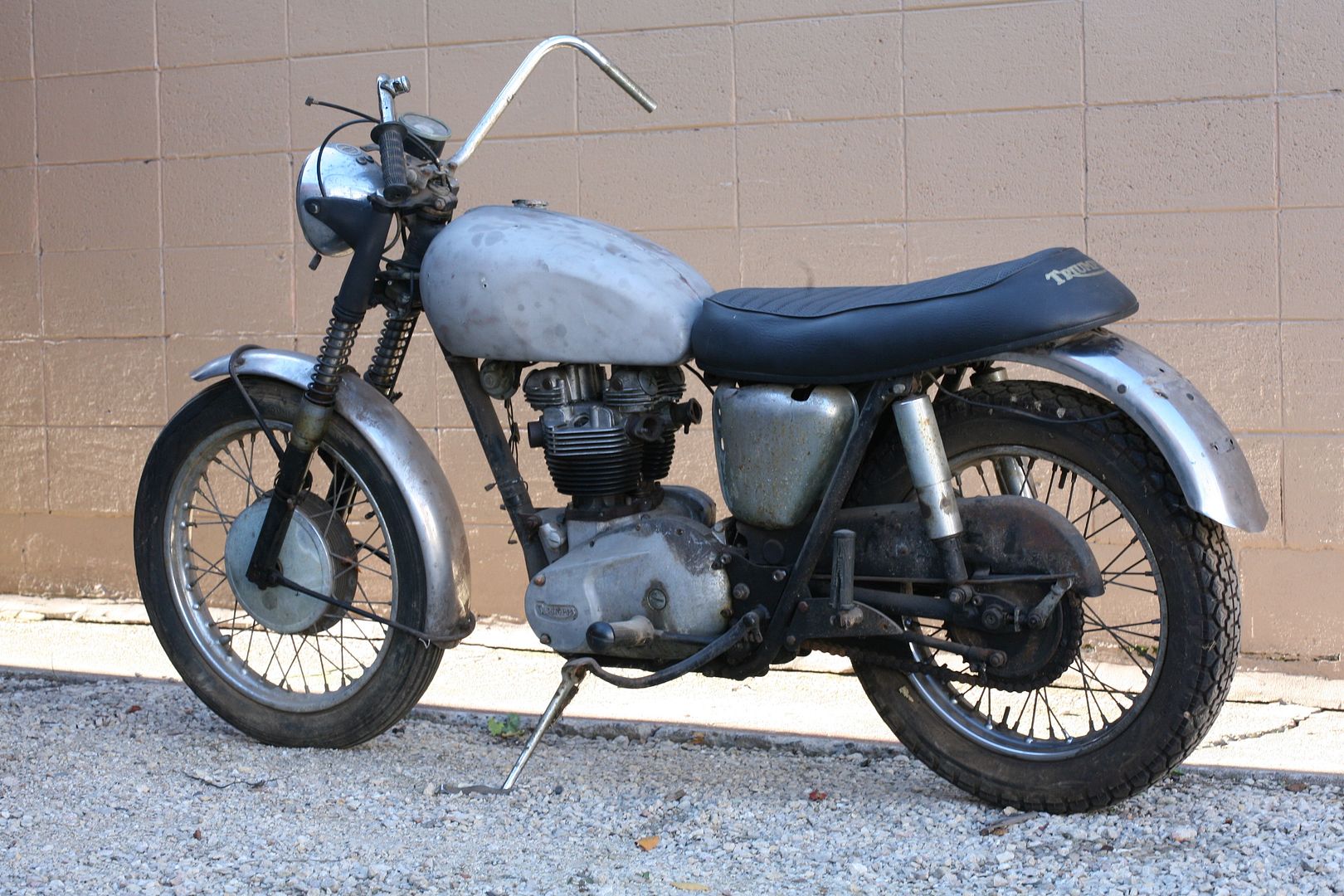 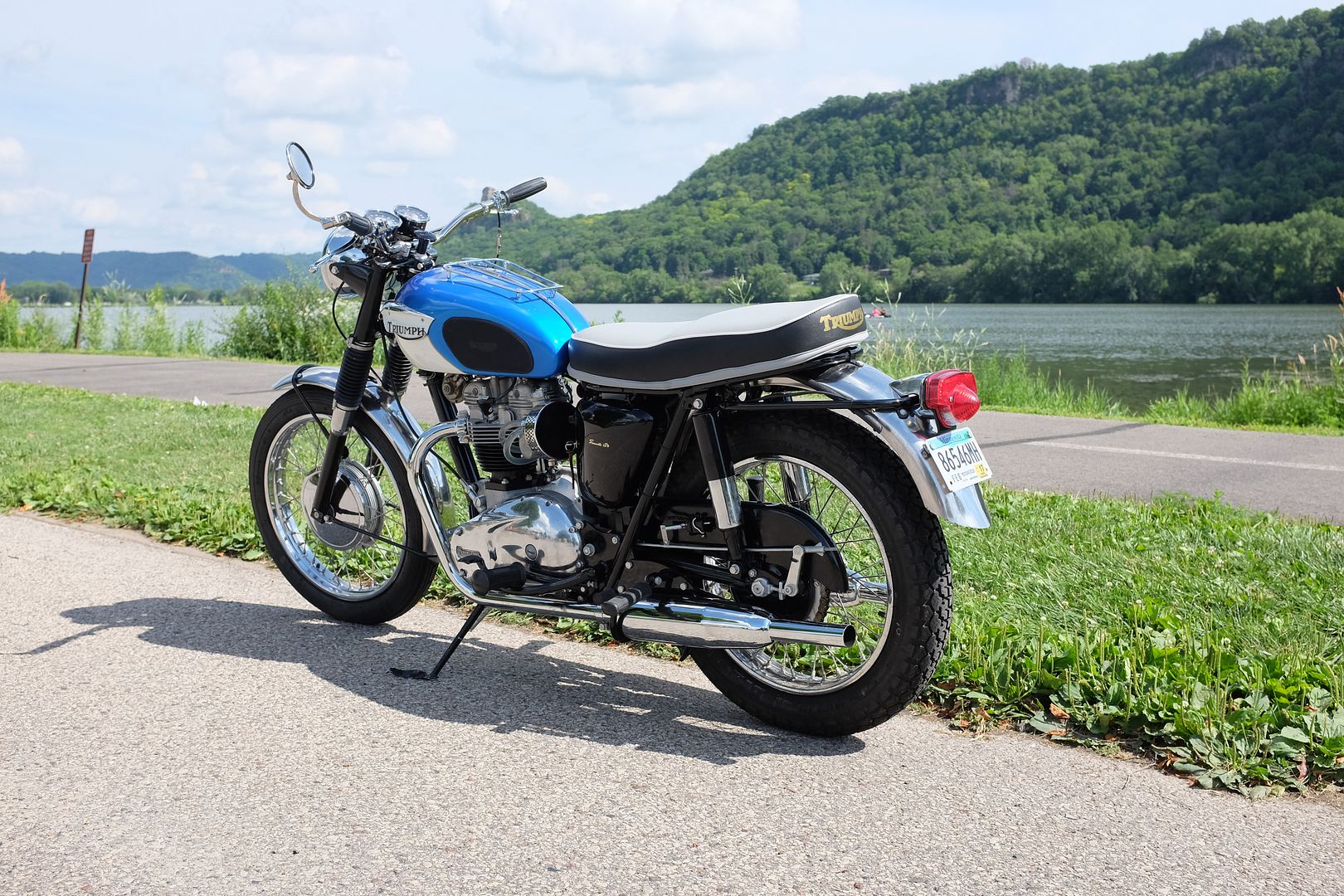