irk miller said:
I appreciate the feedback, but I got it started. Issues were in the wiring and solenoid. The starter itself turns it over just fine. Not sure if you saw the post back there, but I'm running an Keihin FCR38. Took some slight frame modifications, but works very well. FCR's pop up on Ebay pretty cheap all the time in the US.
Click to expand...

Yeah I saw that - I've had to do similar mods to get the dellorto in. I still have a bit more tidying up to do on it. The Keihin is taller than the dellorto so I don't think it would work well on my 250 as the frame is lower than the 500 (on the 250 I can't use the upper engine steady because there isn't space for it!)
E

Irk,
What are your thoughts/plans for suspension and wheels?

ex119x said:
Irk,
What are your thoughts/plans for suspension and wheels?
Click to expand...

I'm still on the fence with both. I have the inclination to rebuild the front forks and run modern emulators, replace the rear shocks with modern ones, then run spoke wheels. However, I don't dislike these wheels and I've seen some nice builds where they were kept. Plus, its less money invested and I can go tubeless more easily. I also don't want to raise the bike any more than it is, since I'm a pretty short dude at just 5'6".
E

I feel like stock, the handling is pretty slow, with the 19" front wheel, stock rake and the leading axle fork. I use longer shocks, but you could drop the front, a little more overlap of the fork tubes and sliders wouldn't hurt. You could also go with an 18" front. I usually use a 17, but it does get twitchy and wants to do tank slappers unless you ad a steering damper. The VT 500 Ascot is an 18 and while it does not have identical spokes, it is very similar. They are very cheap on e-bay.

DTT BOTM WINNER
I’m starting to hit everything in the vapor hone to figure out what I can restore and what I can’t. We start with rear end 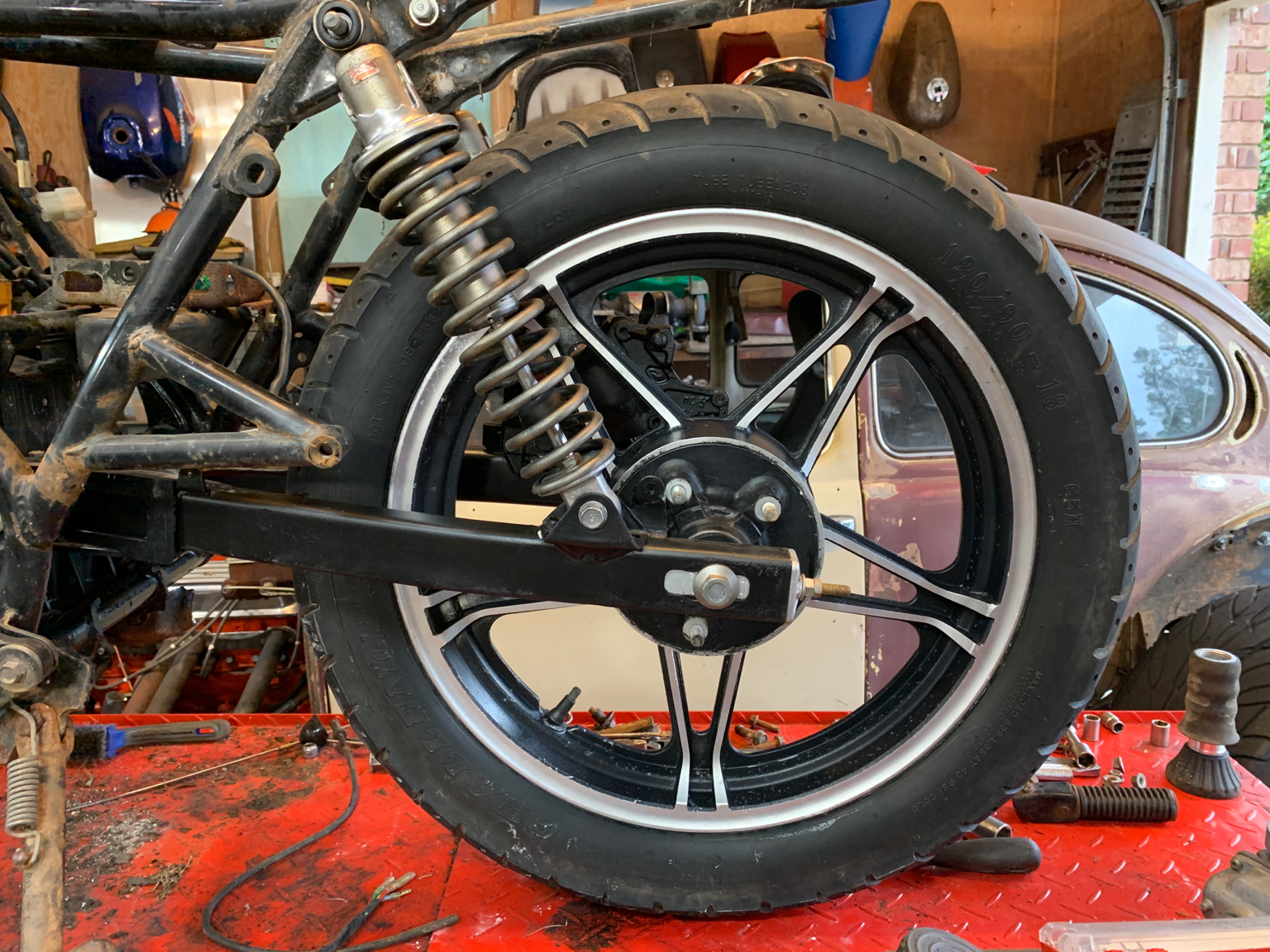 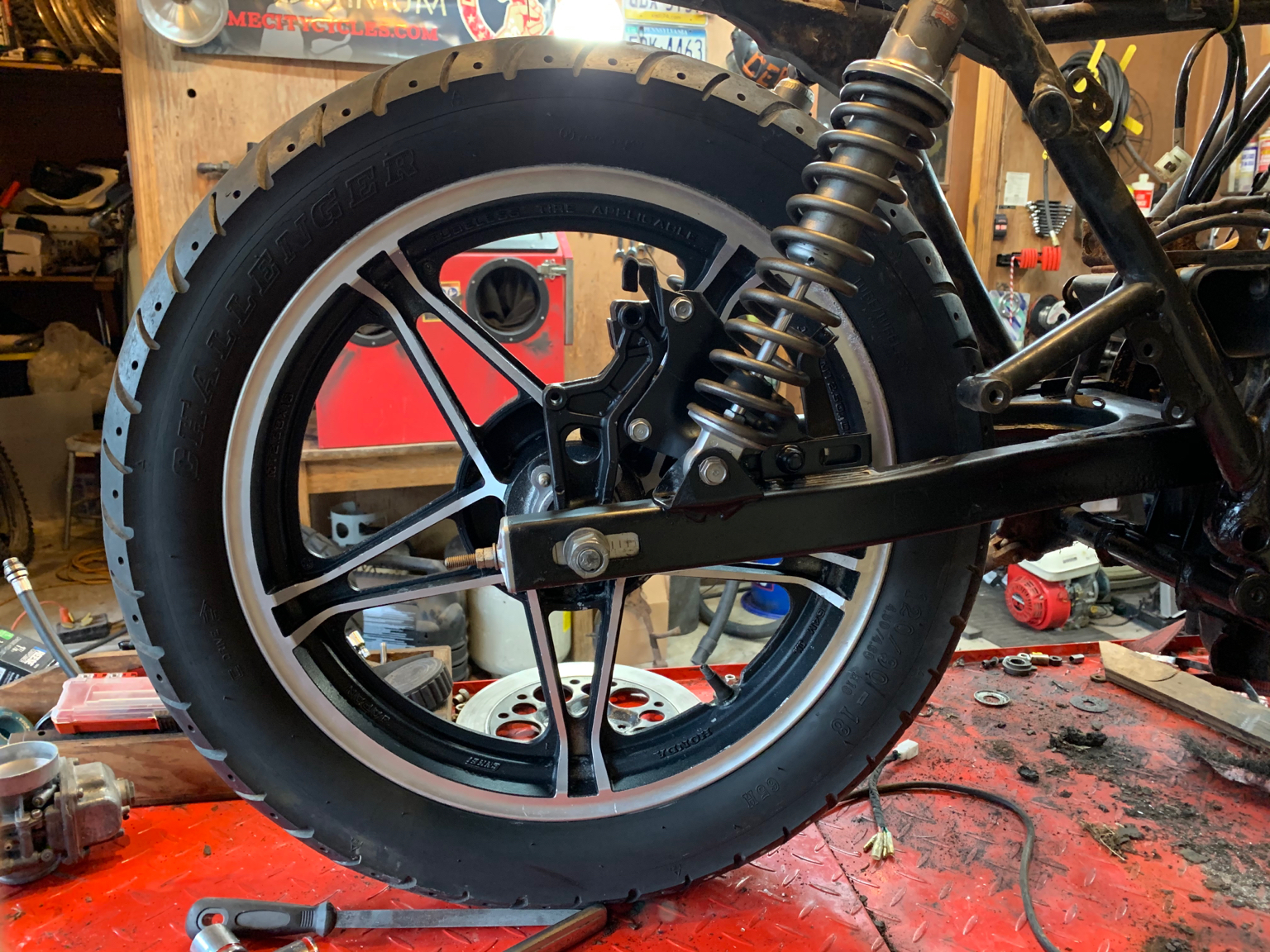 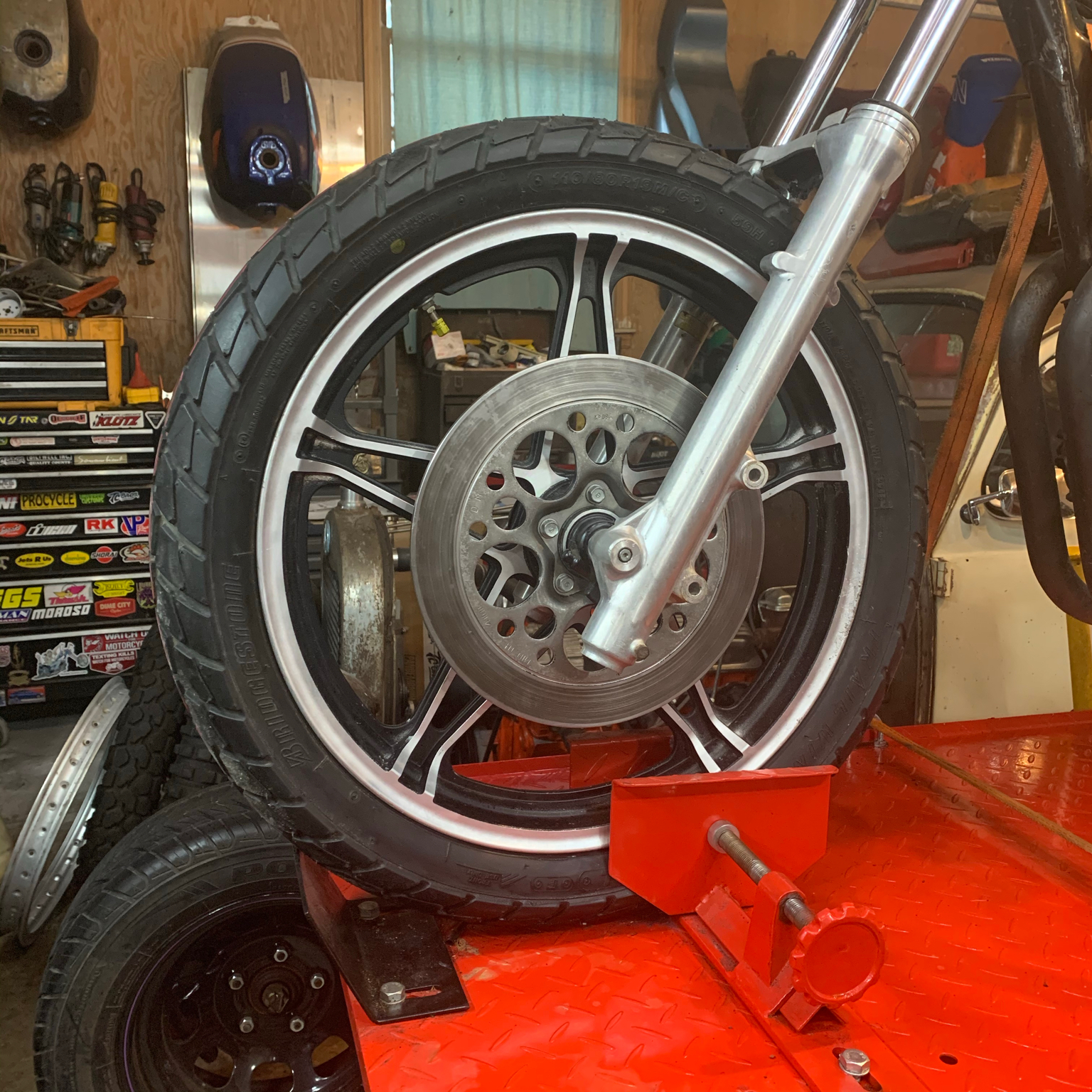 DTT BOTM WINNER
Pulled the clutch cover to find the likely reason why the PO parked it. The counterbalance chain is laying on the bottom of the case... 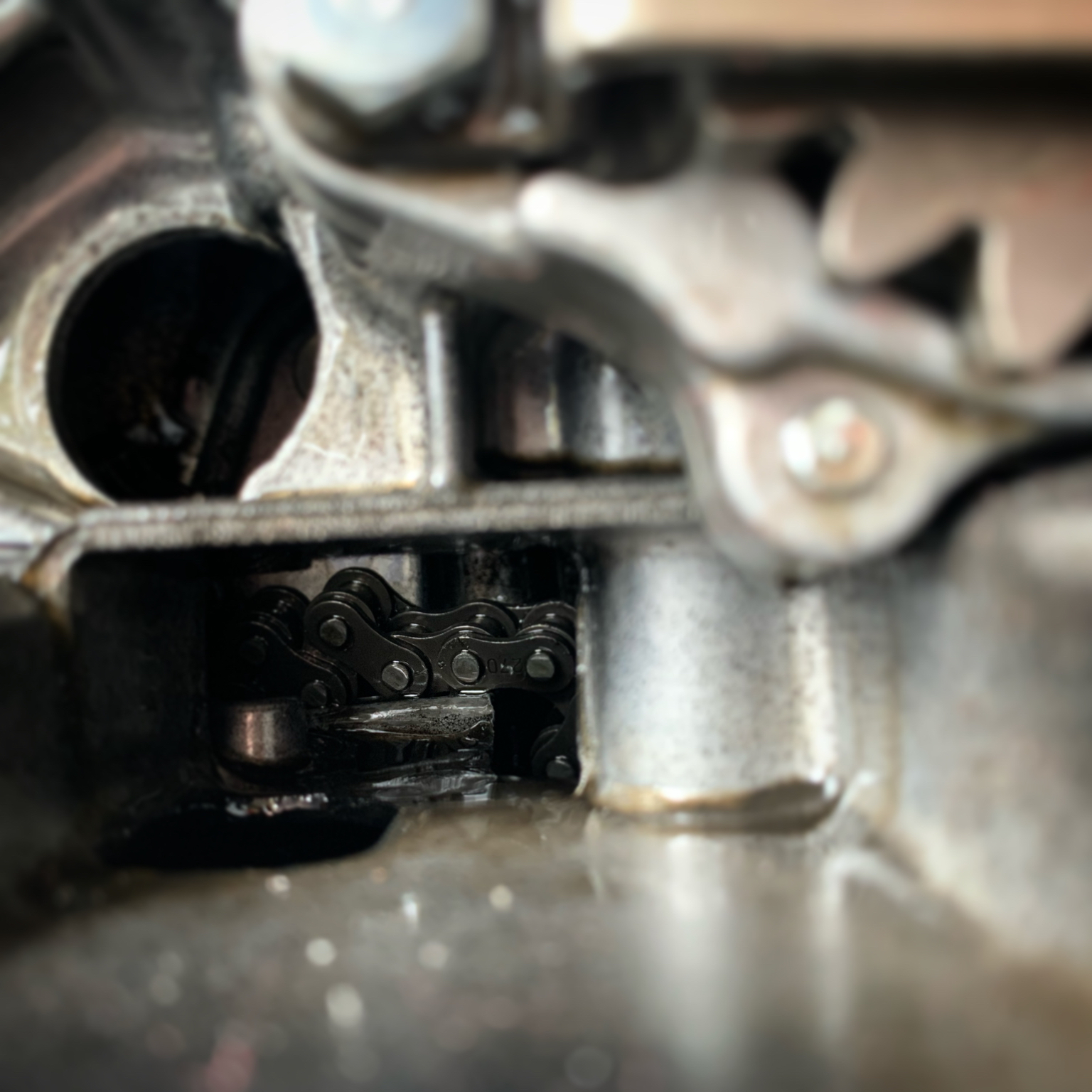 I’ve been digging around for what it takes to add the XR500r kickstart. It doesn’t seem too complicated. My clutch cover has a freeze plug where the shaft goes, and the case is bored to receive the other end of the kickstart shaft... 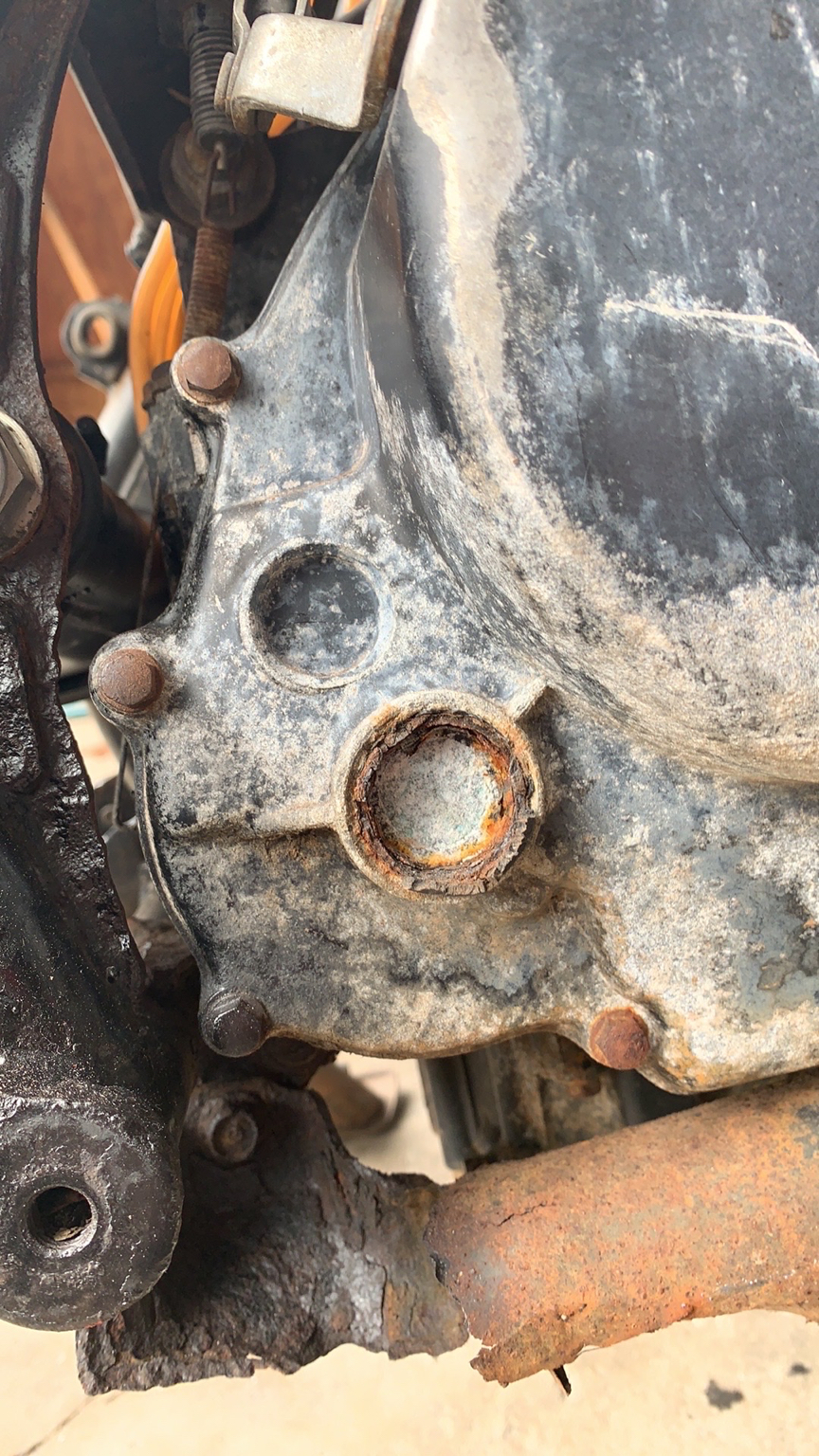 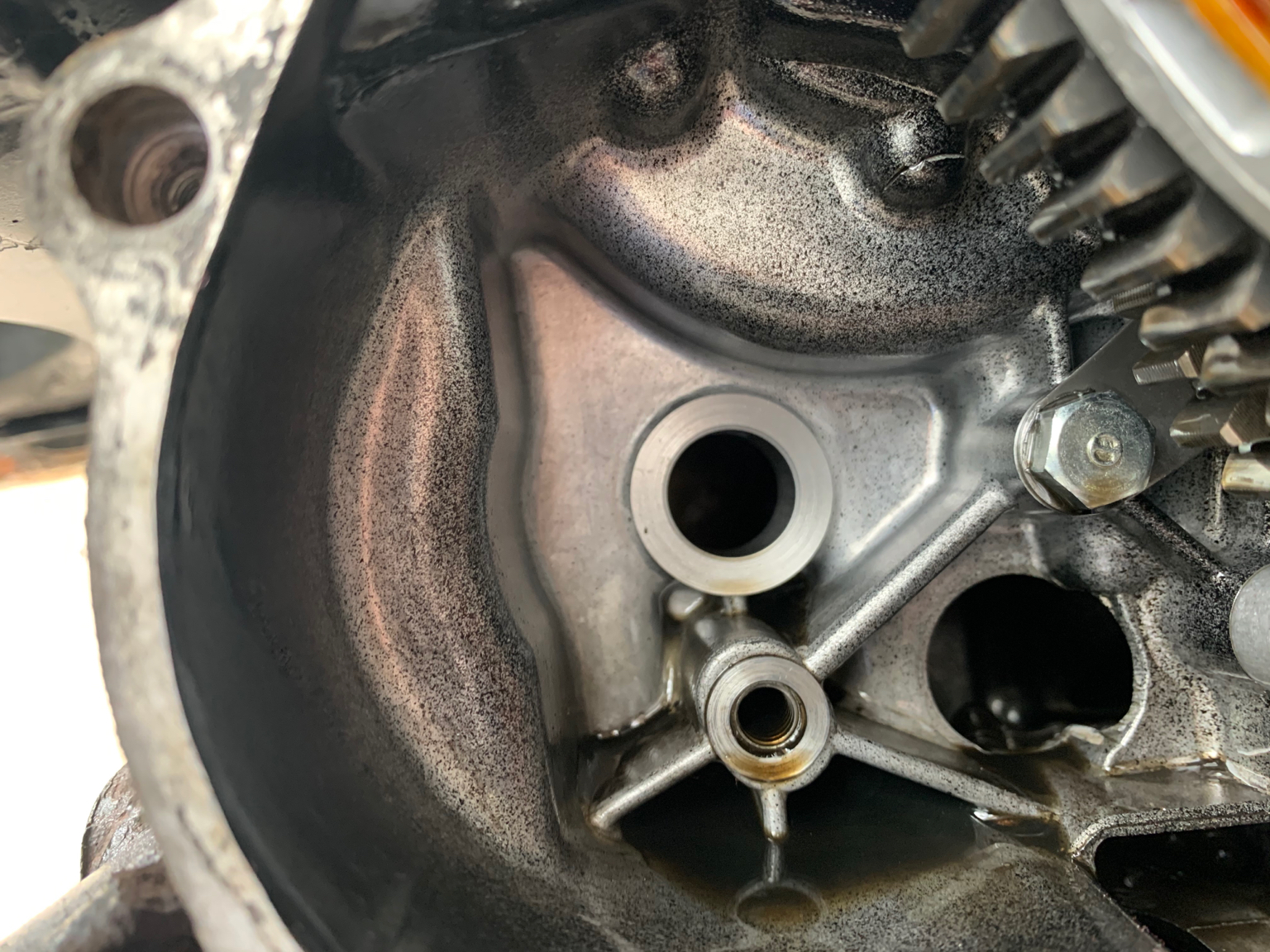 Big thumper will be a fun dirt machine.

DTT BOTM WINNER
The FT is out of the barn. Hoping to have it on the road in early June. 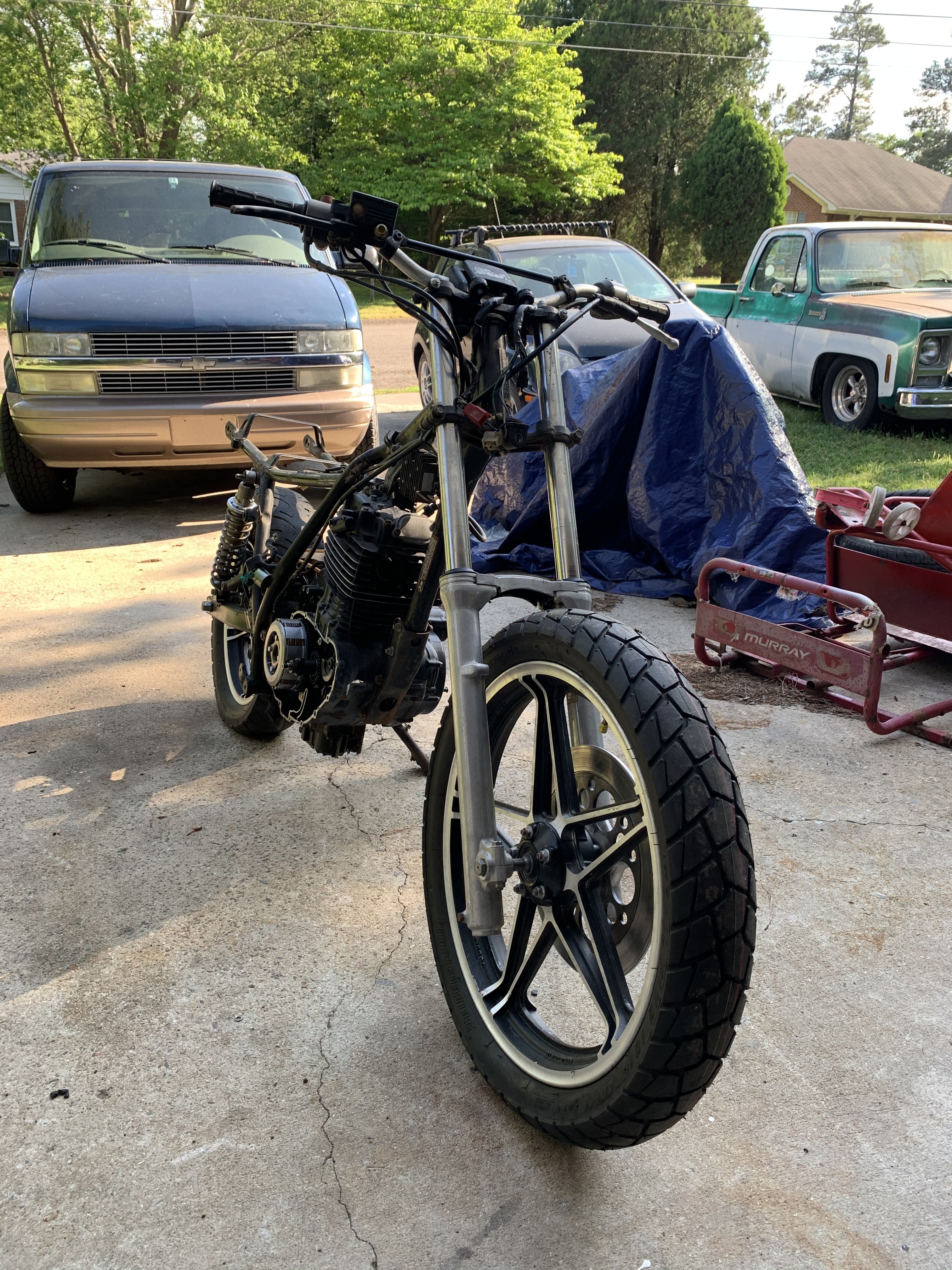 I tested a 21” front wheel, just to see. Unfortunately, it fit under the fork brace, so now I can run two wheel sets. Life sucks. Also just messing around with headlight/fairing options. This is test #1. 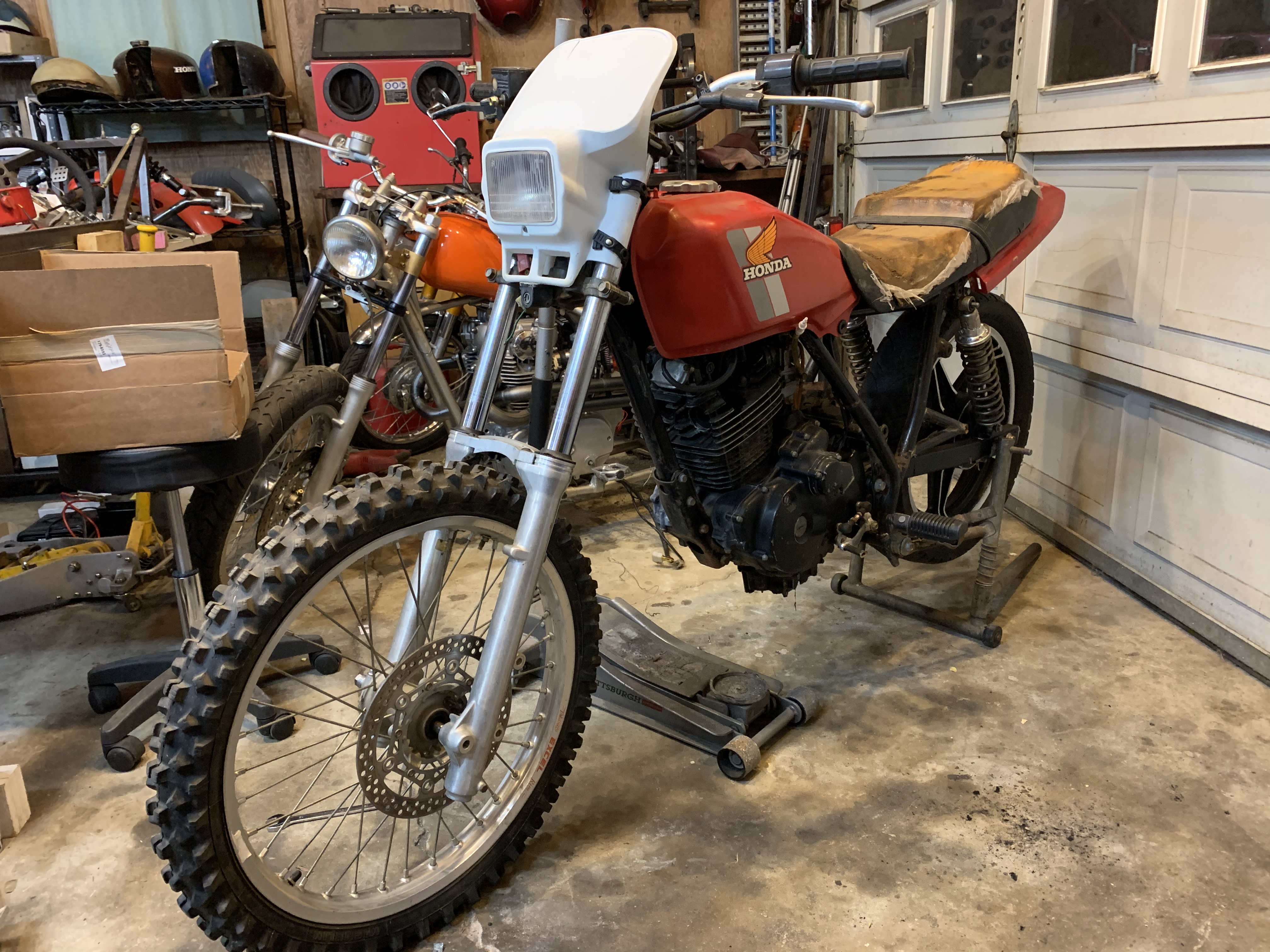 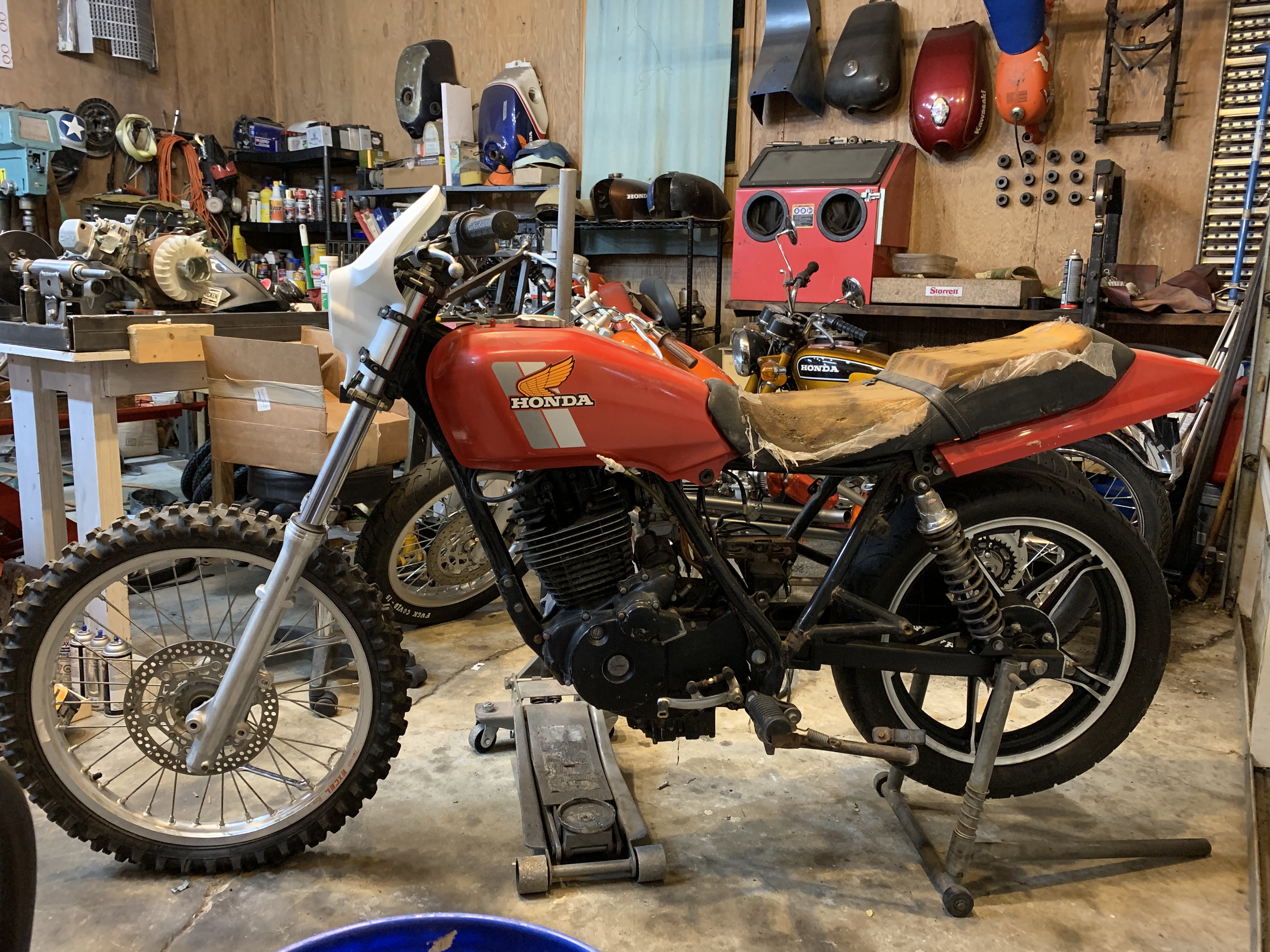 Fun. I like that look and a set of both off and on road wheels to swap between can double the fun and uses of the bike for sure. I wish I had the $$ for the one I found close to me a few months ago I'd have something to tinker on during Covid.

DTT BOTM WINNER
Working out a plan to shorten the tail plastic and seat 5 3/4”. 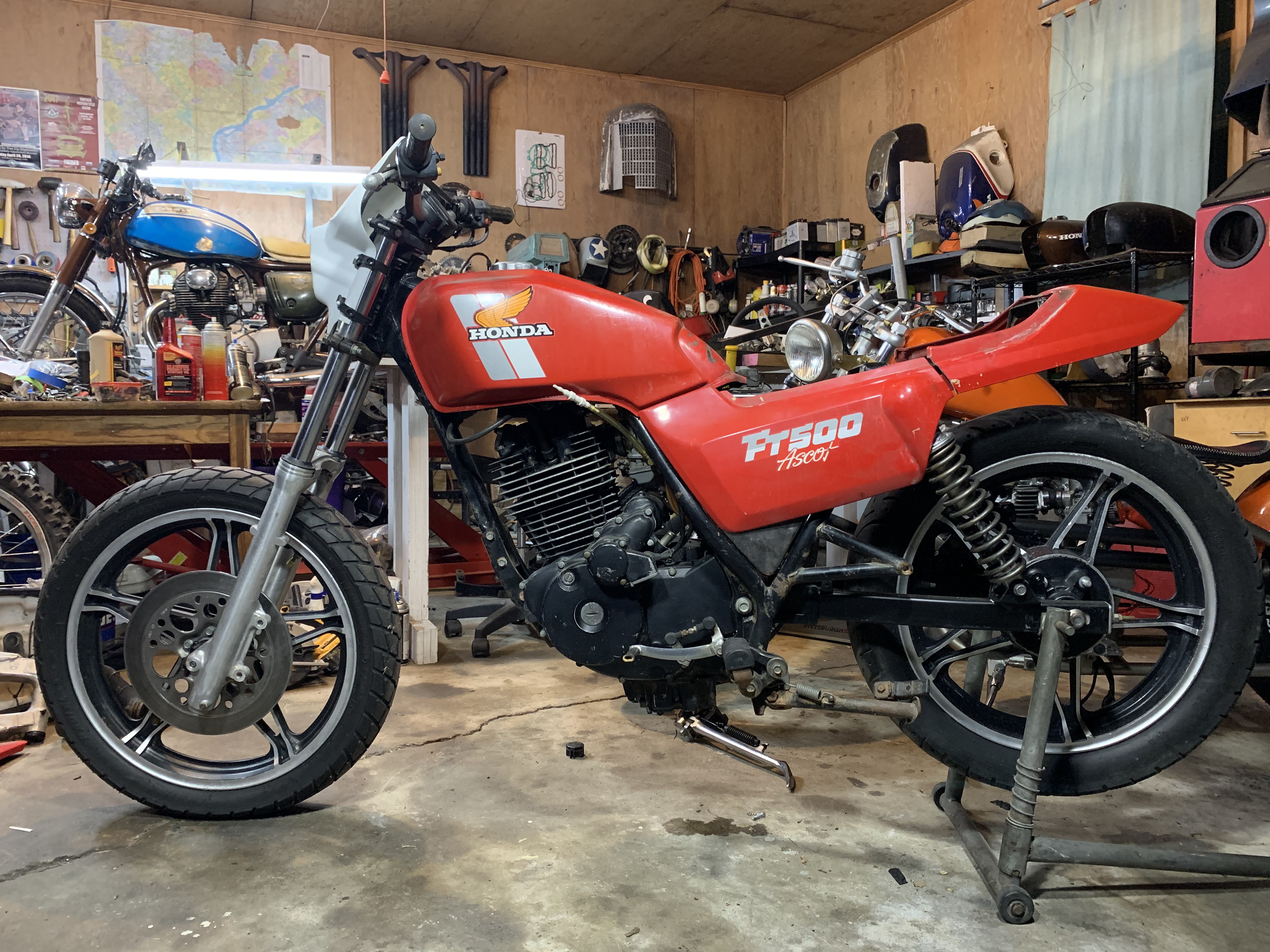 DTT BOTM WINNER
I was winging it on this process. Two things I knew ahead of time: Super 77 bonds foam and you can torch bond PPE plastics.

Taped out my area to be removed. I’m doing this with the seat together so it’s easier to line stuff up. 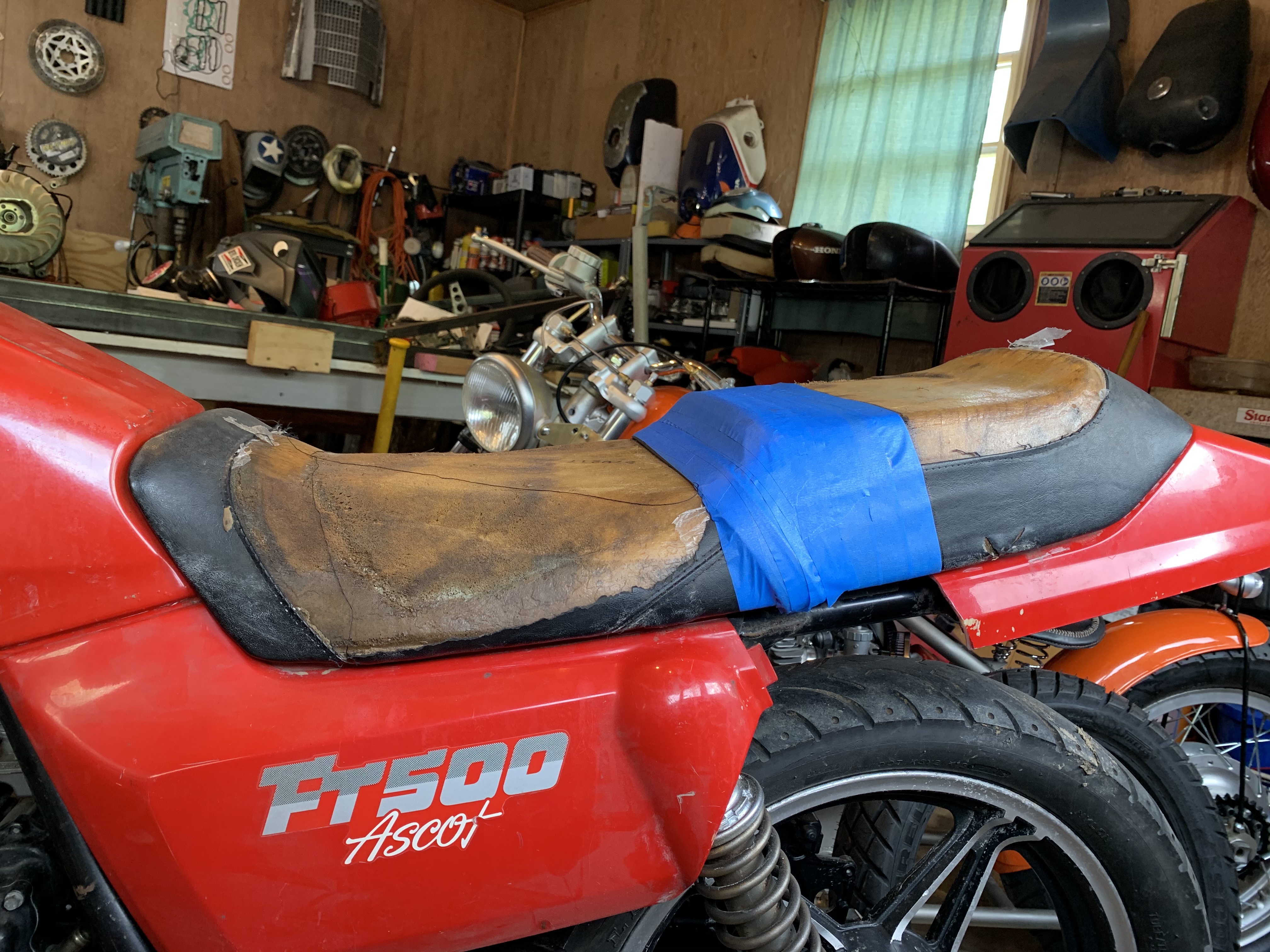 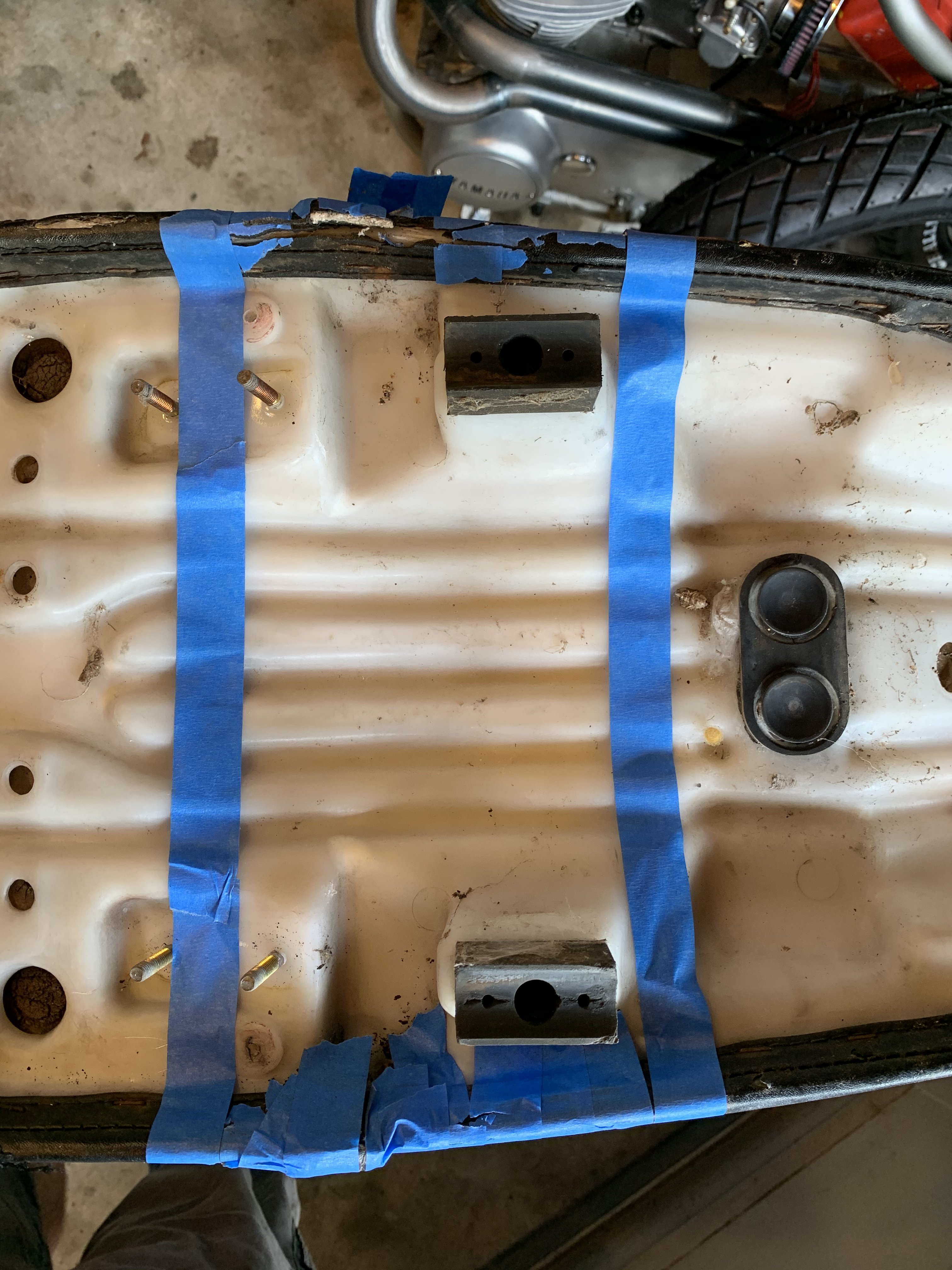 Taped up the seat foam and the plastic to insure everything was lined up, then trimmed the seat foam with an air sander and a 100 grit disc. 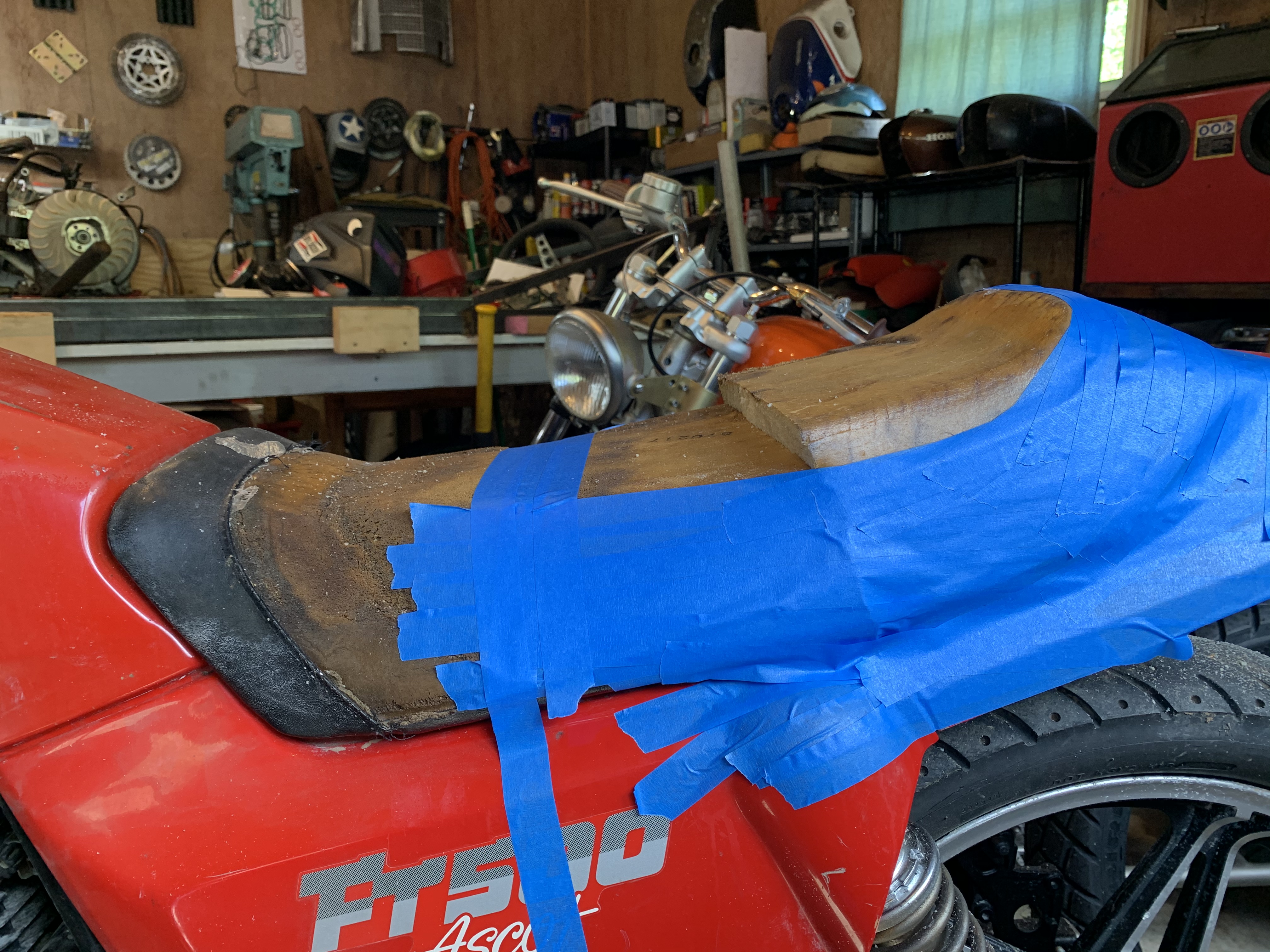 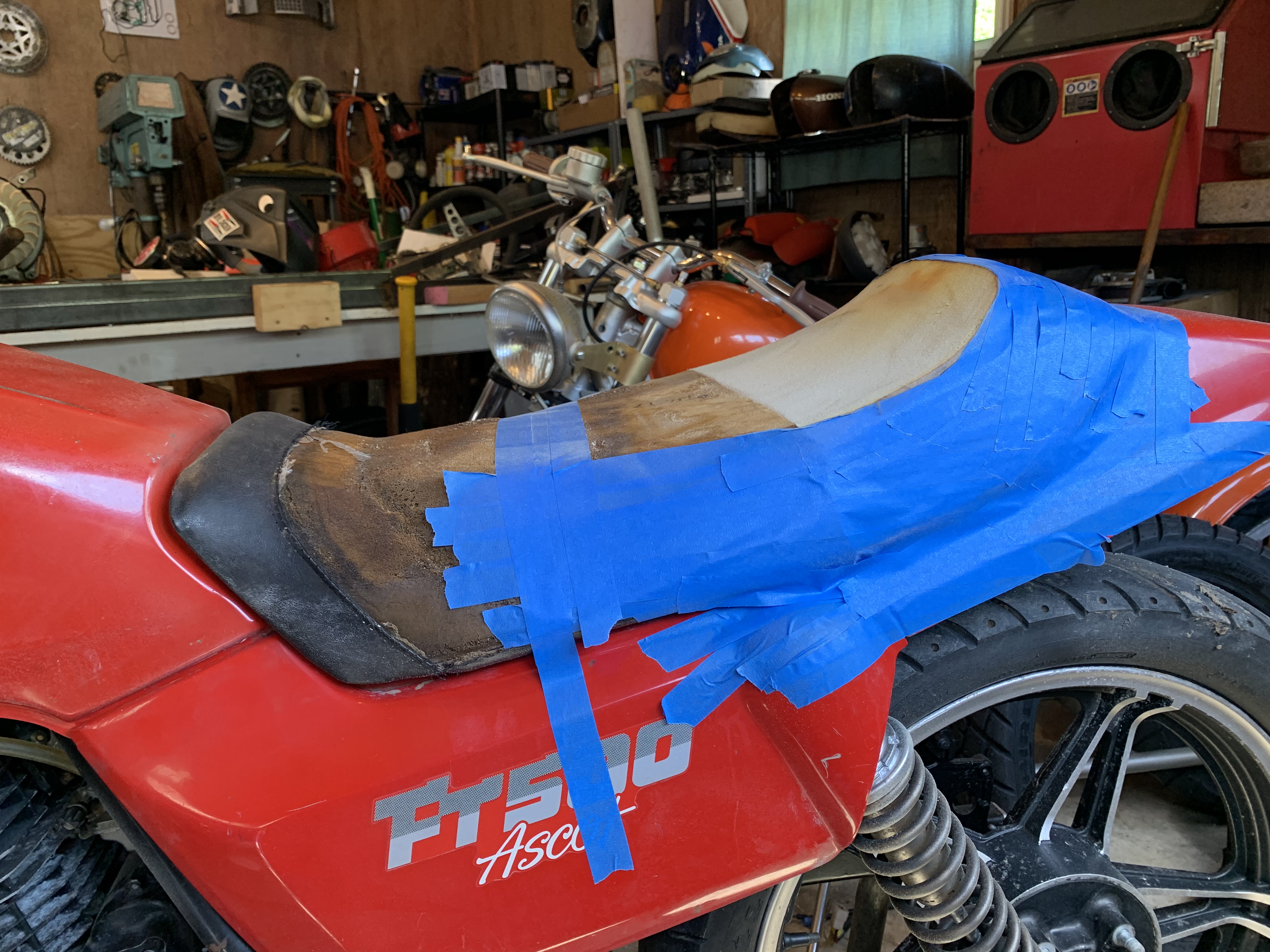 More taping to get it all together and tight. 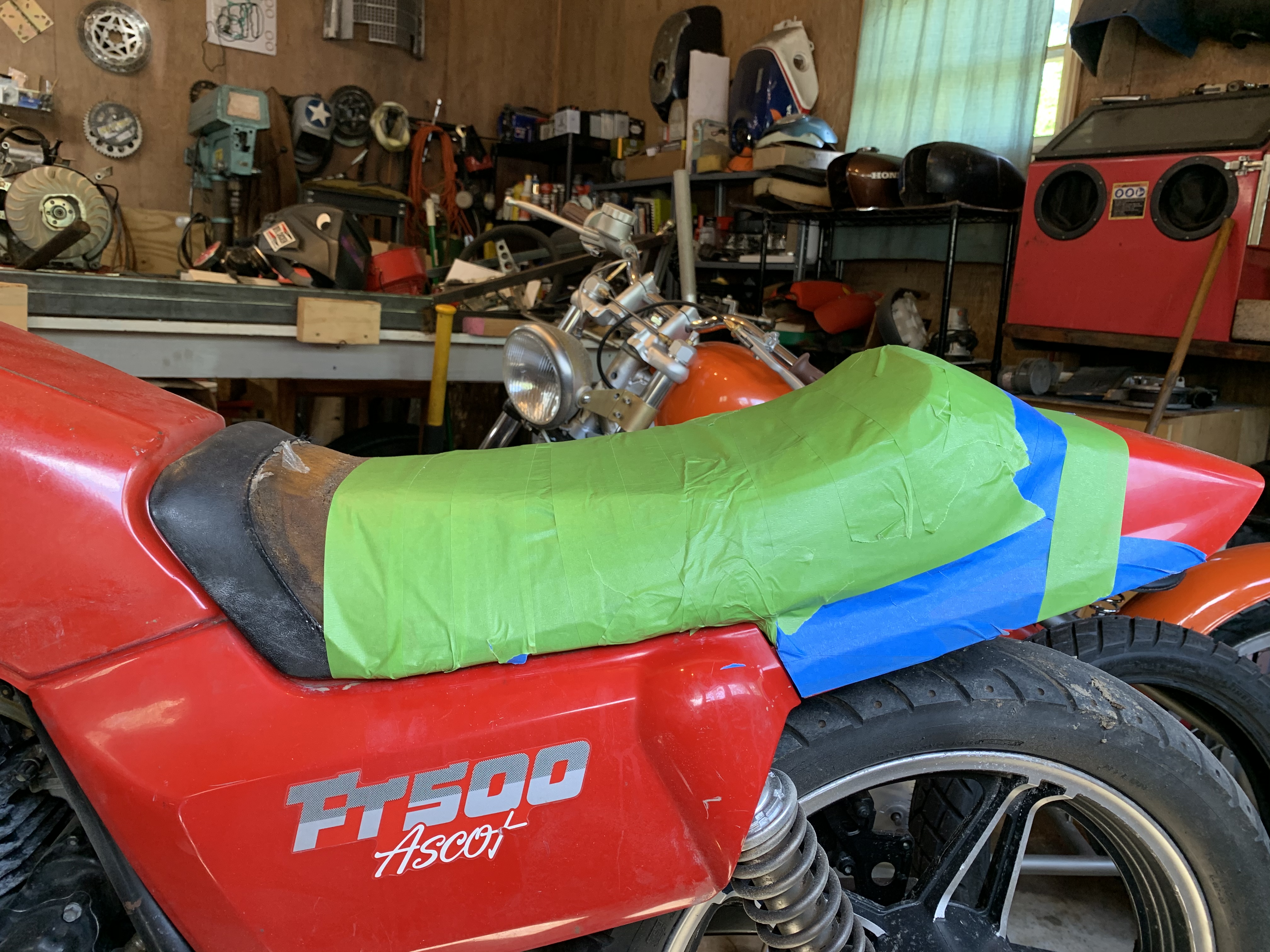 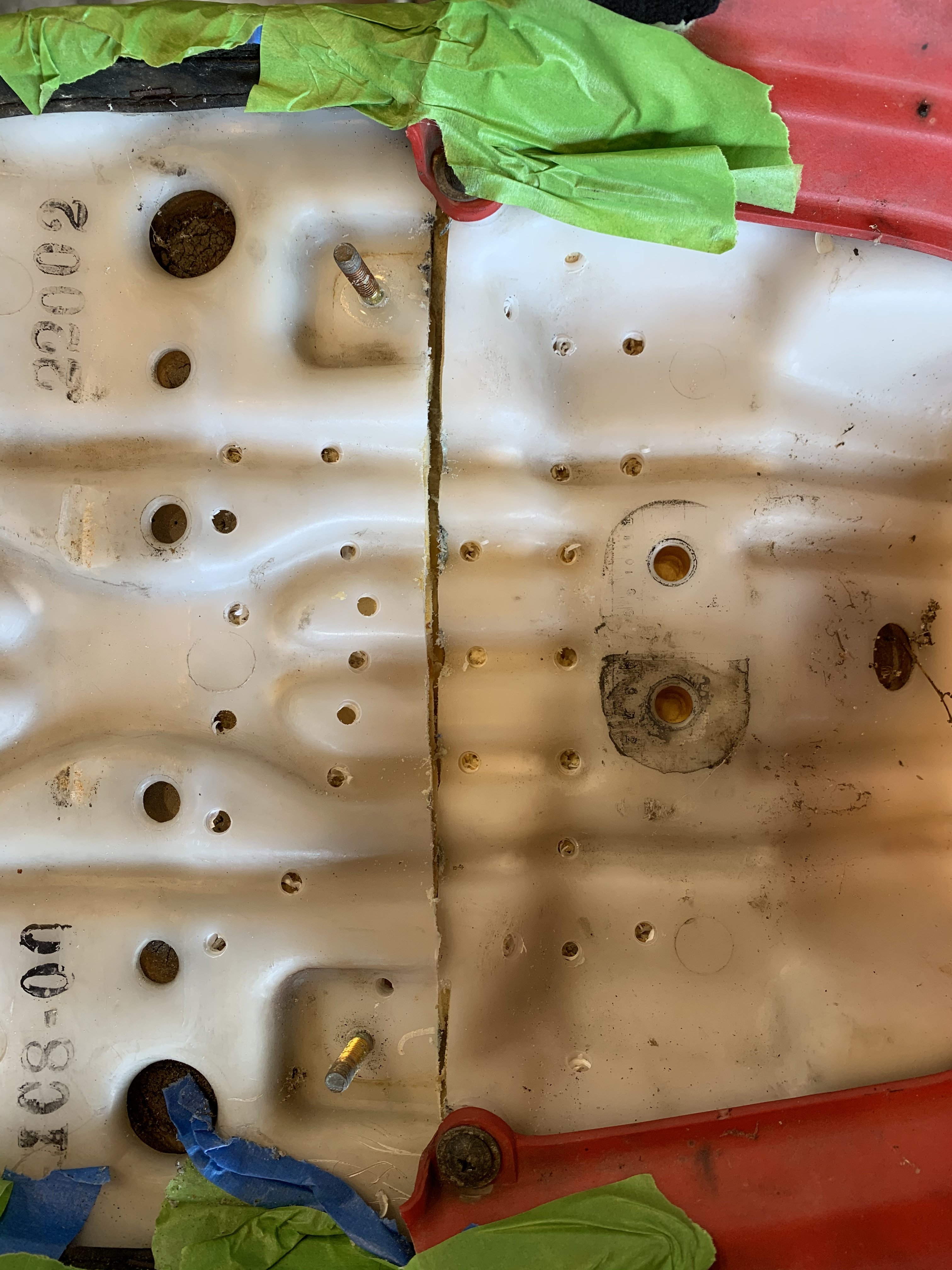 I cut up pieces from the middle section I cut out, then used them to build the bridge between the two halves. Not exactly pretty, but it’s under the seat and hidden away. 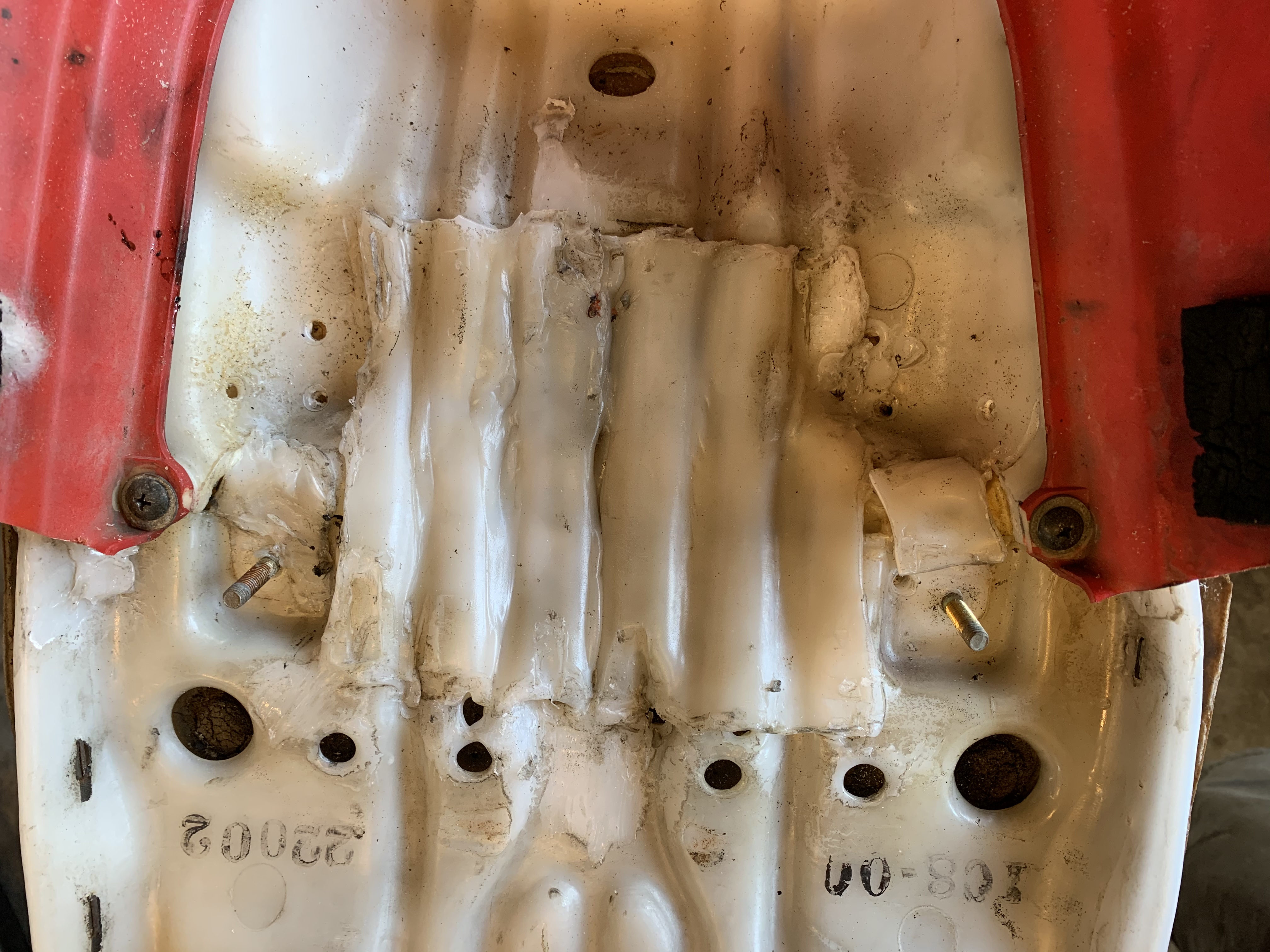 I did a final, quick sanding of the seat foam to insure a good seemless transition between the front and back halves after I bonded the foam with Super 77. Here it is finished. Next up, I need to sort out the frame mounting brackets and new locations for the rubber pieces that gap the seat to the frame rails. I kept one original mounting bracket stud, so I just need to locate the second. 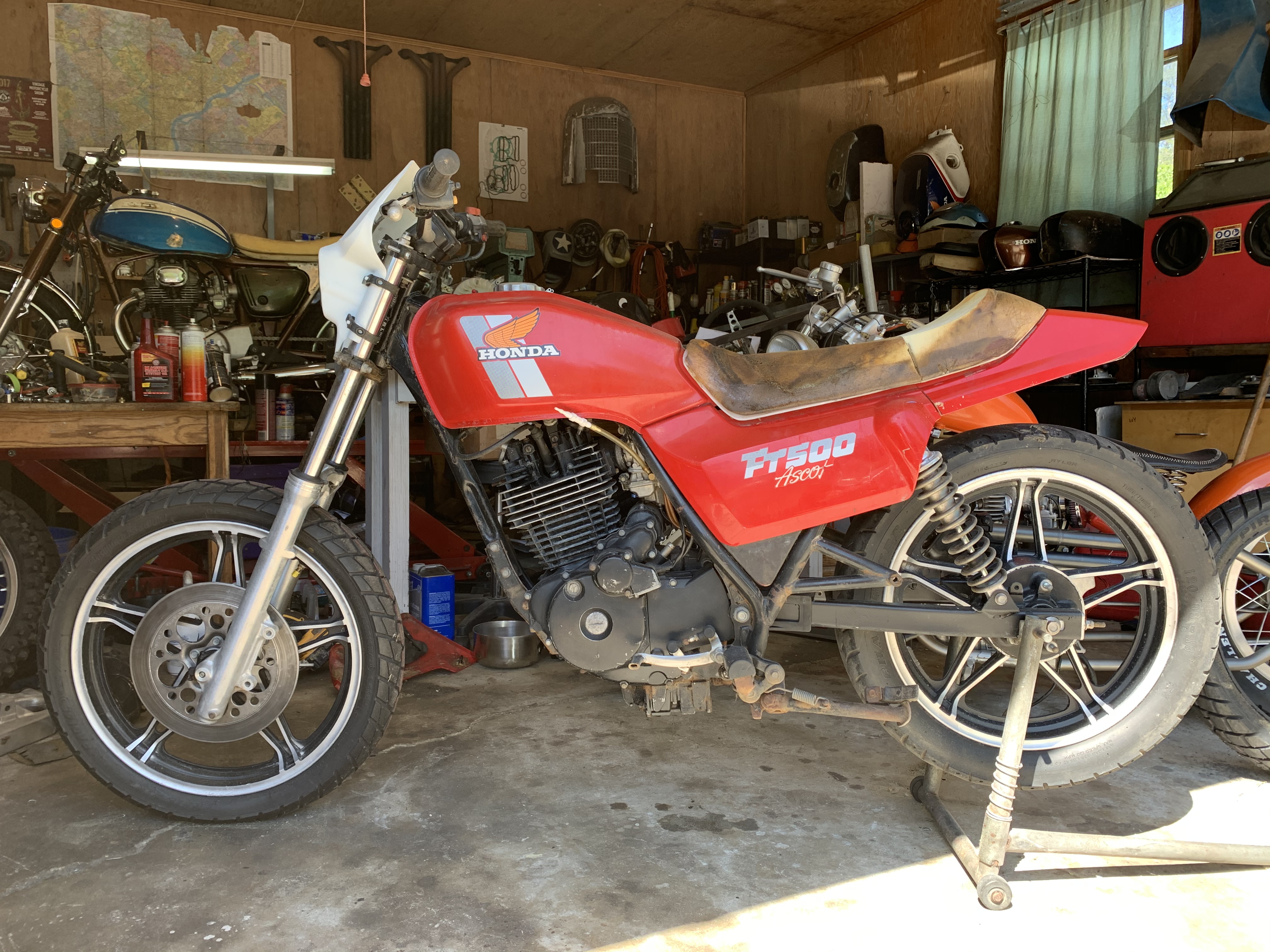 NIce! Honda should have made the seat/tail shorter, improves the looks and I bet buyers would have agreed. 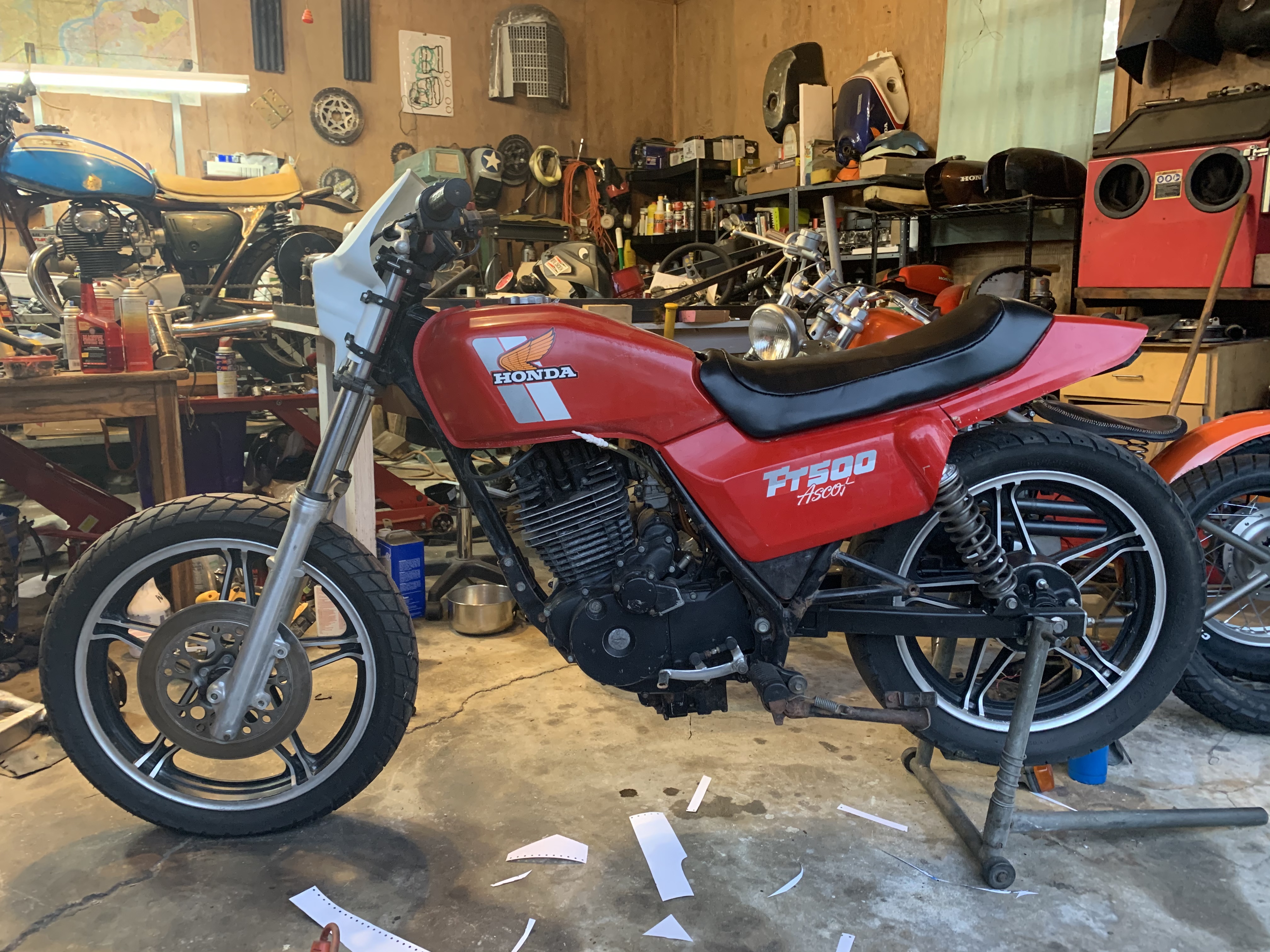 Un-doing what Honda marketing probably did. This makes it look right.

I use to own one of these just like this. Taking the 5.75” out is exactly what it needs to make it look like it should have when new. I didn’t really dislike that bike, though it didn’t start very easily, but seeing it after your attention I can now see what was “wrong” with it before. Somehow the thing just never looked “right” to my eyes. (Like)

DTT BOTM WINNER
Retrofitted XR250l/XR650l headlight assembly. The fairing is in subpar shape, so I’m waiting on an XL600R fairing to test. 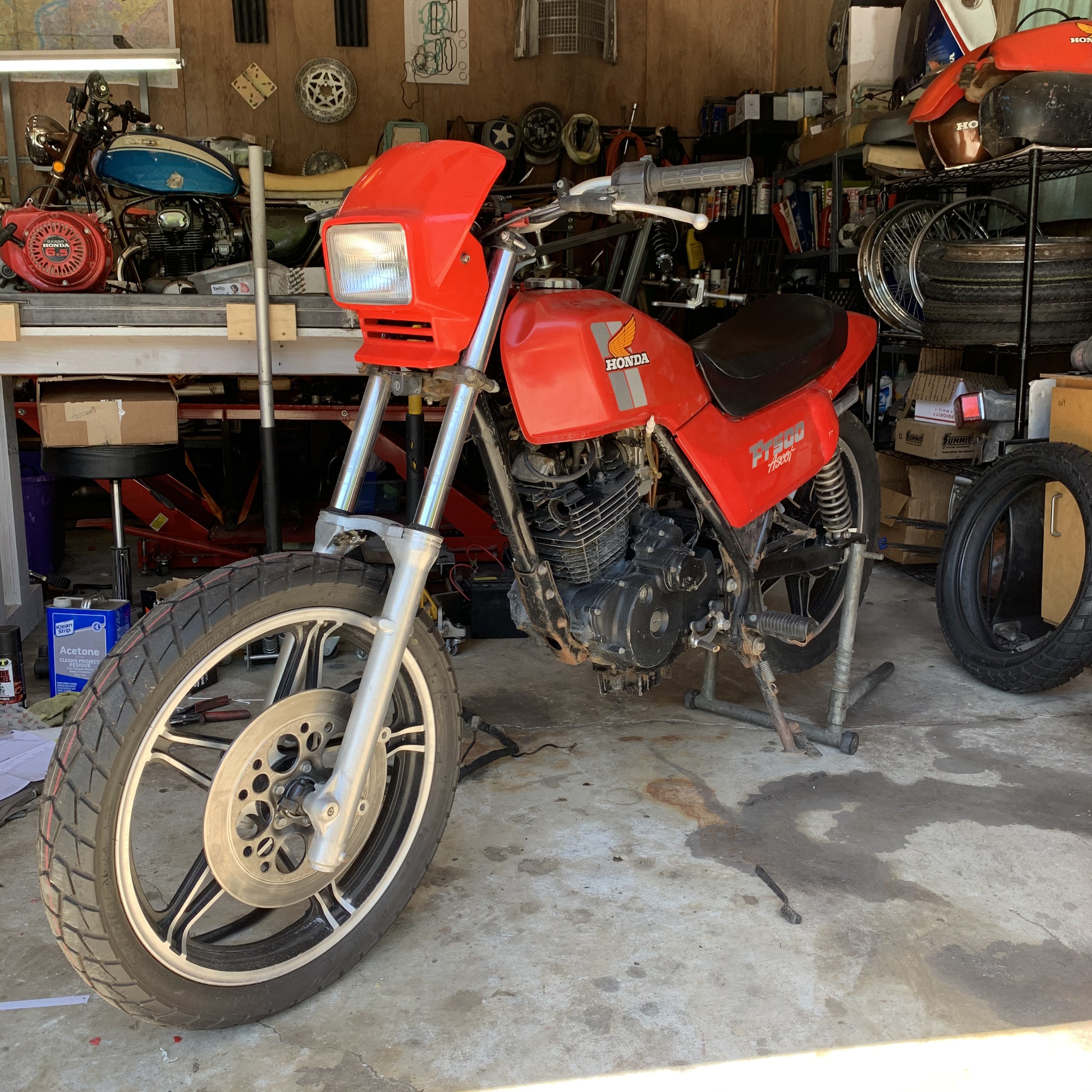