#1 get JIS screwdrivers and bin the Phillips for Japanese bike work. #2 those upp er screws look readily accessible to a small pair of good vice grips.

1 beer and 1 night sleep further:
removed the oil pressure switch to make some required room and used a small adjustable spanner, i guess thats what the translation is, to get rid of the damaged screws. 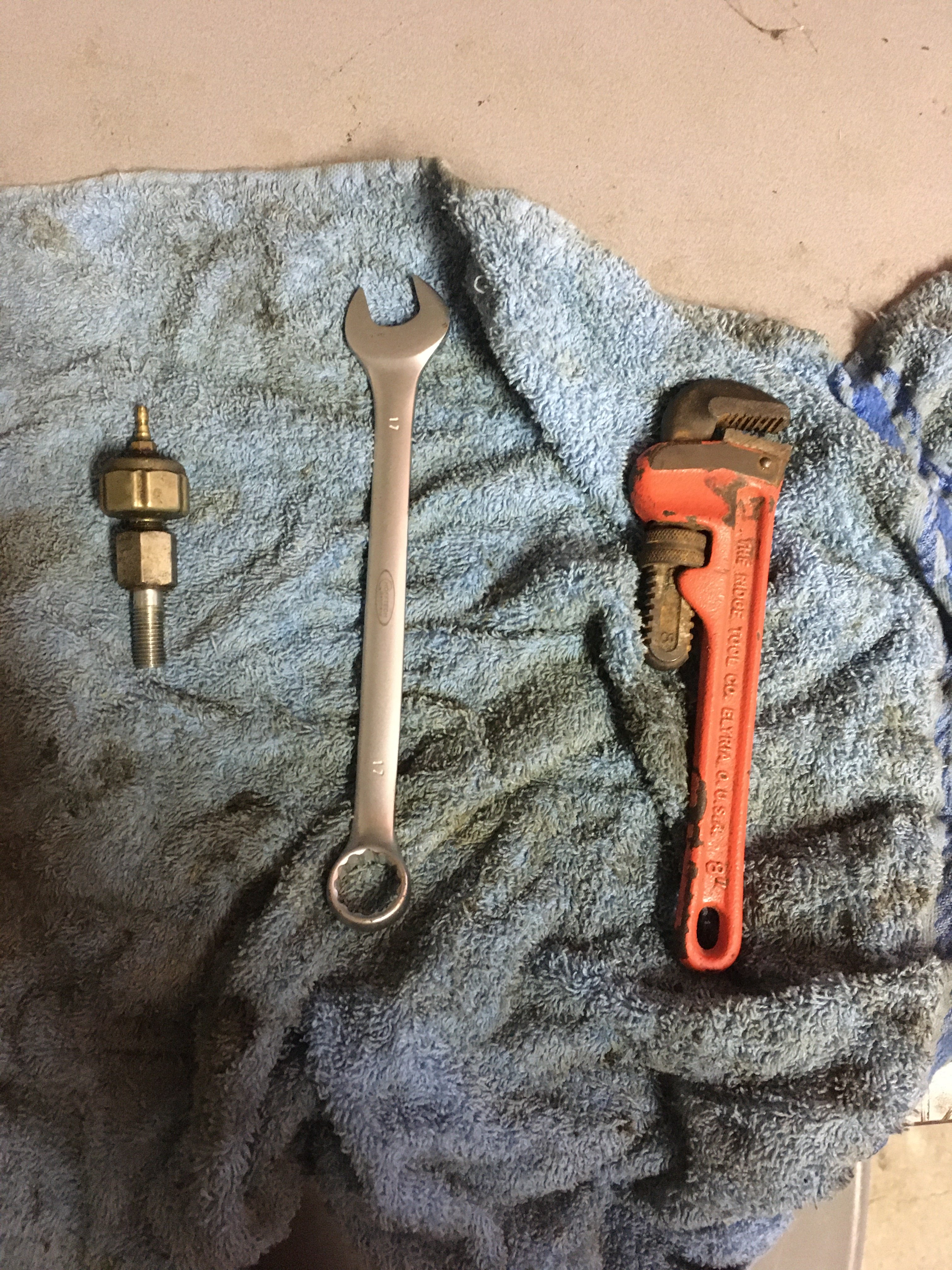 a few minutes later:
prior to removing i cut away the damaged rubber to have proper access to the screws.
both old intake rubbers where about 3/4 torn. 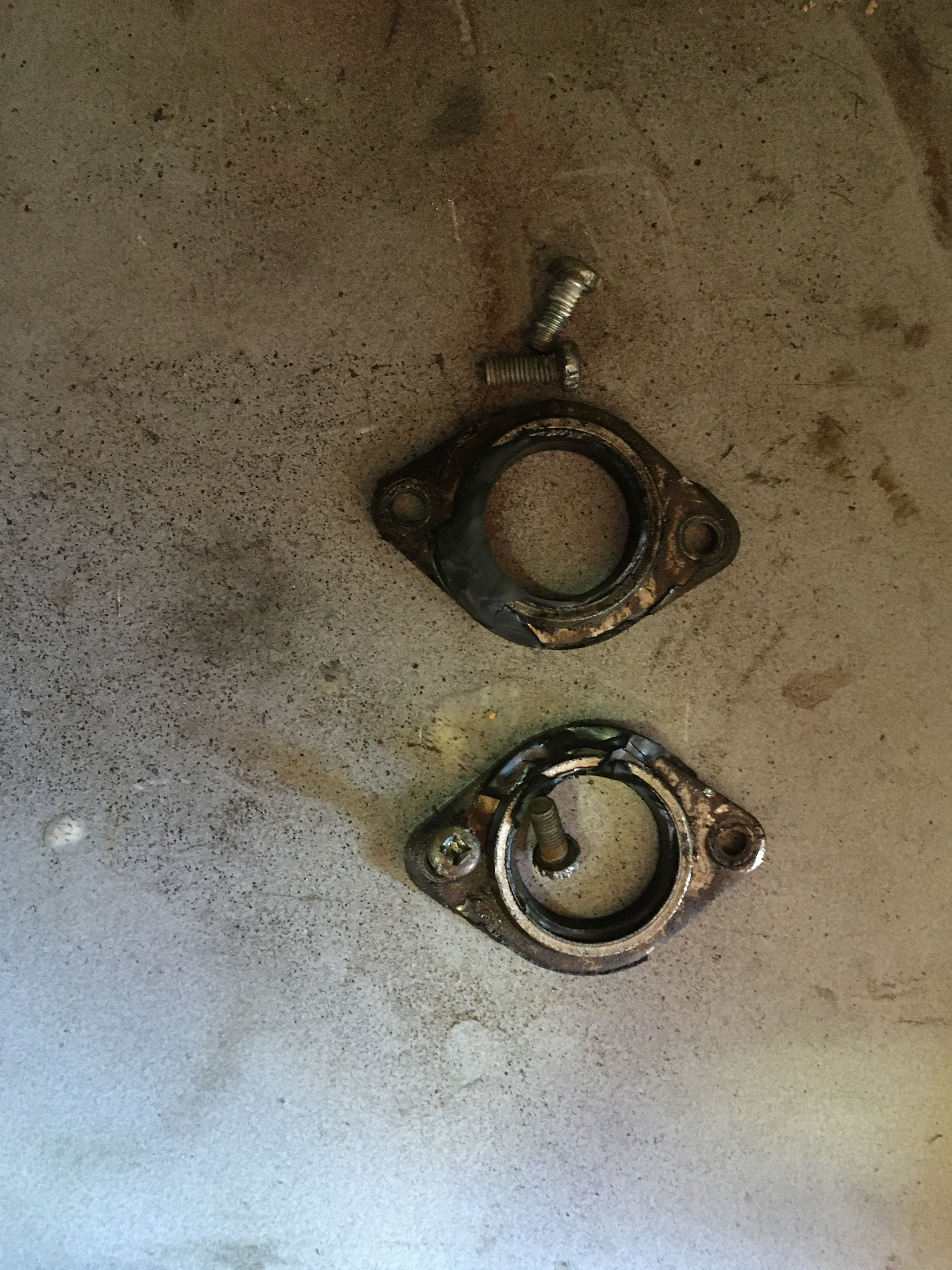 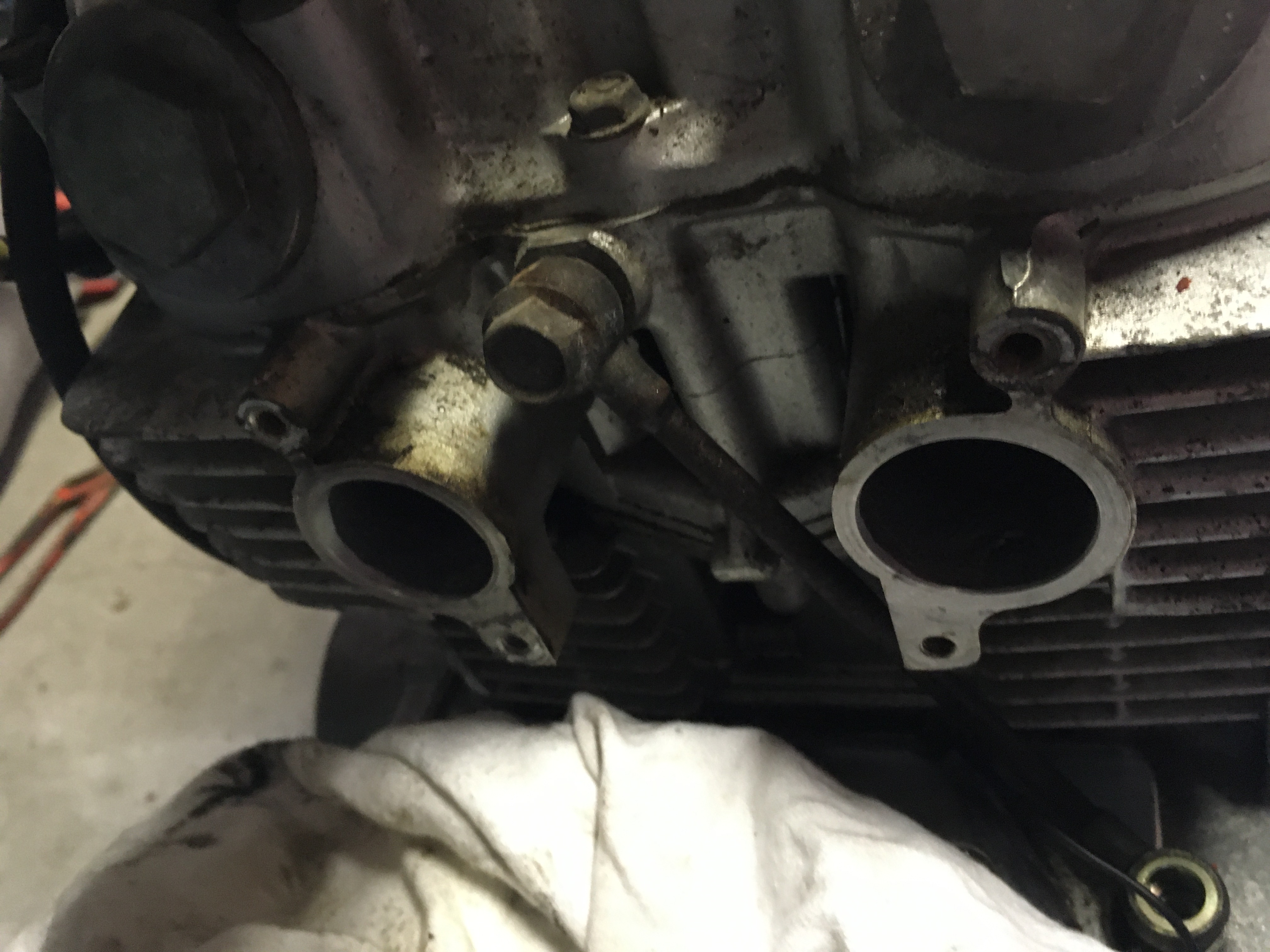 now need to find the proper allen bolt size to replace the screws with.
Then reinstall the new intake rubbers and this job is done.

Then the carbs need attention, those will probably require another beer and night sleep

Invest in a JIS screwdriver, mine has a metal core so can be used as an impact driver too. The screw head Xs are specific to the JIS criteria and no other crosshead fits as well.
Good work to get those screws out btw. A 10minute job turns into a 2 day job... :/

sometimes it's better to step away and re-think instead of pushing on and end up with much more issues.
i've found some JIS bits in the toolbox which i used to get some of the screws loose. a JIS bit and a small spanner did the tric.

inspected and cleaned the carb's, set the top cover in the black wrinkle, cleaned the breather hoses and clamps.
just need to get me some new screws or allen bolts before placing it back.
think i'll do some more cleaning and painting on the engine and parts prior to installing. 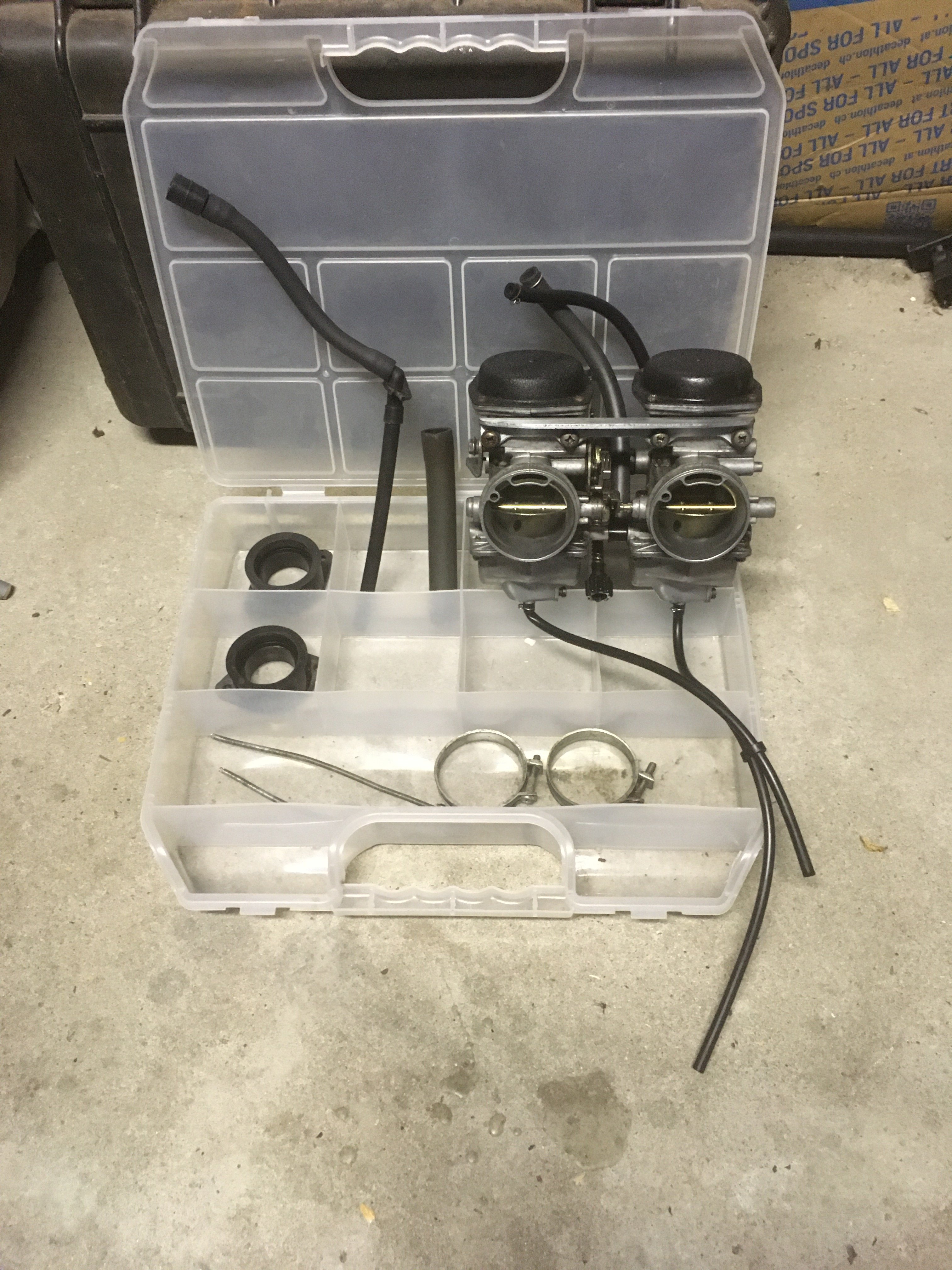 Anybody ever used following on removing dents is the gas tank?
i have some major dents in the gas tank and i've seen some reviews on youtube that it worked.
was cheap so i ordered it, thought give it a try! 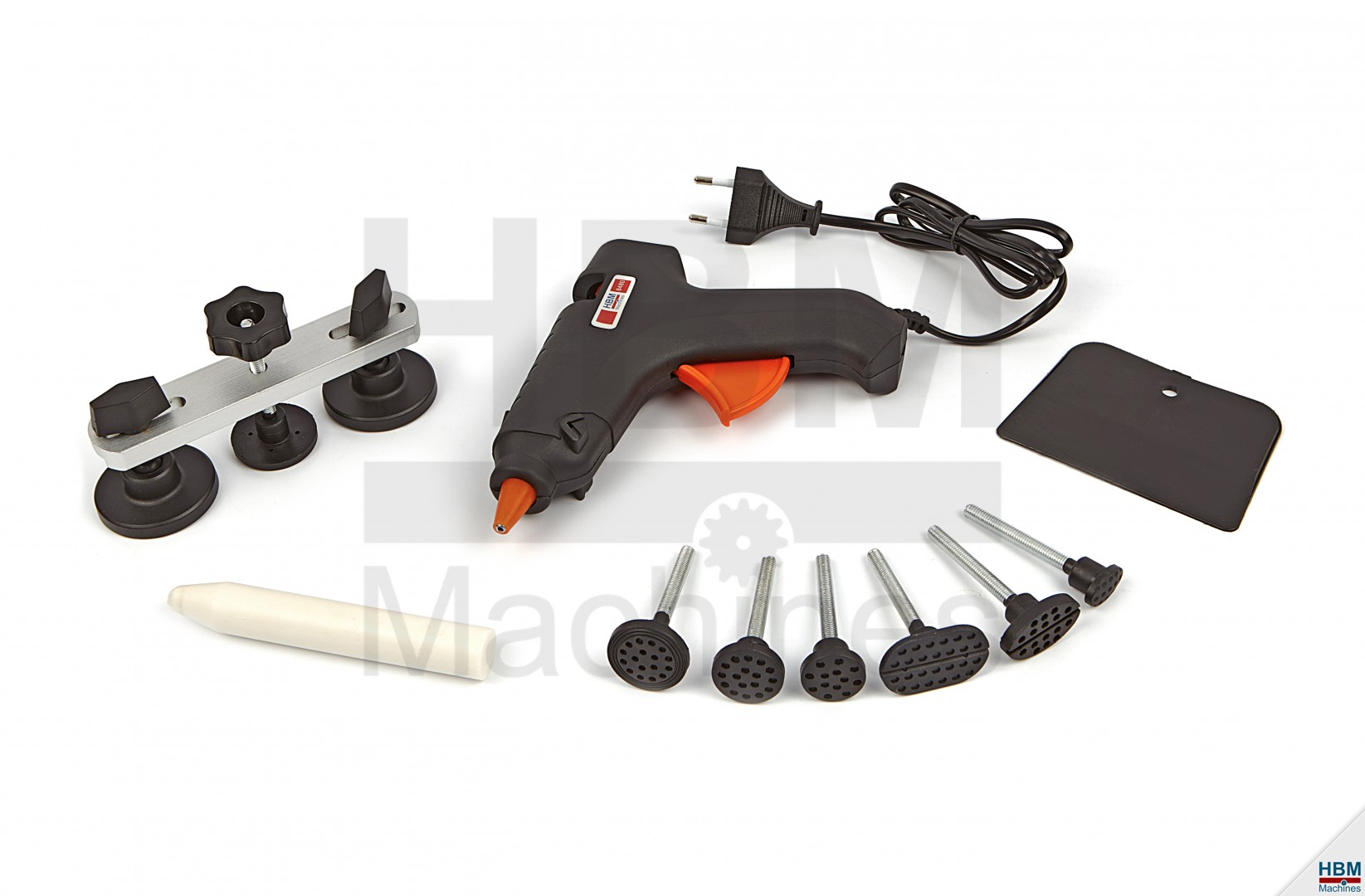 A few folks have. I know as long as the dent isn't creased it usually works.

DTT SUPPORTER
DTT BOTM WINNER
I used one of those very successfully on a CB500T tank. You have to be very patient and take your time, don't expect the dent to come out all at once. No matter how careful you are there are times when the hot melt glue won't hold and you don't get a pull, but just keep at it. Round dents work better you may. not be as successful with sharp-edged dents. 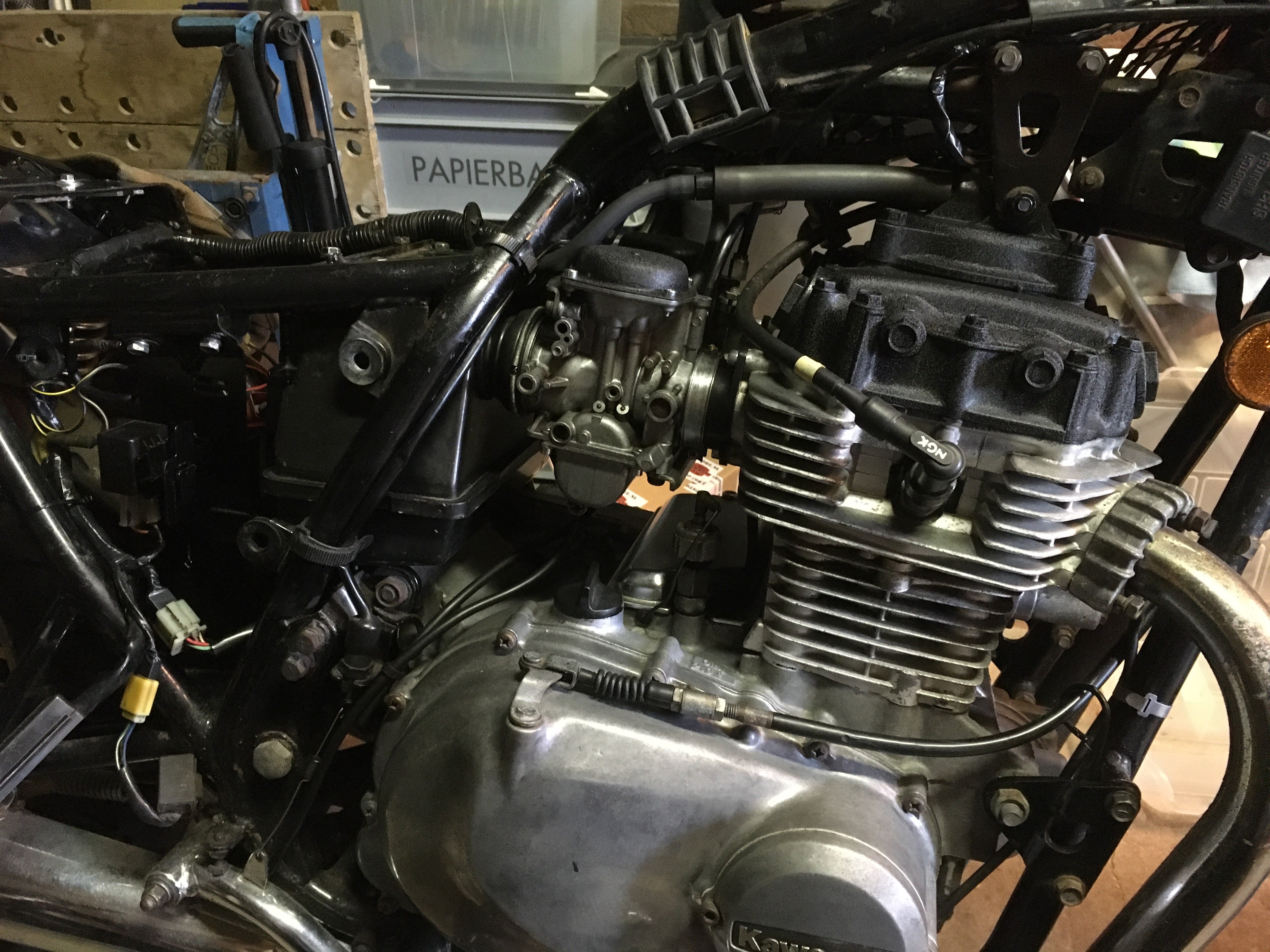 little bit of paint, cleaned it and installed it, looks better than it was, hopefully see runs better now too.

before testing it, pulled the exhaust off for an inspection and go over. 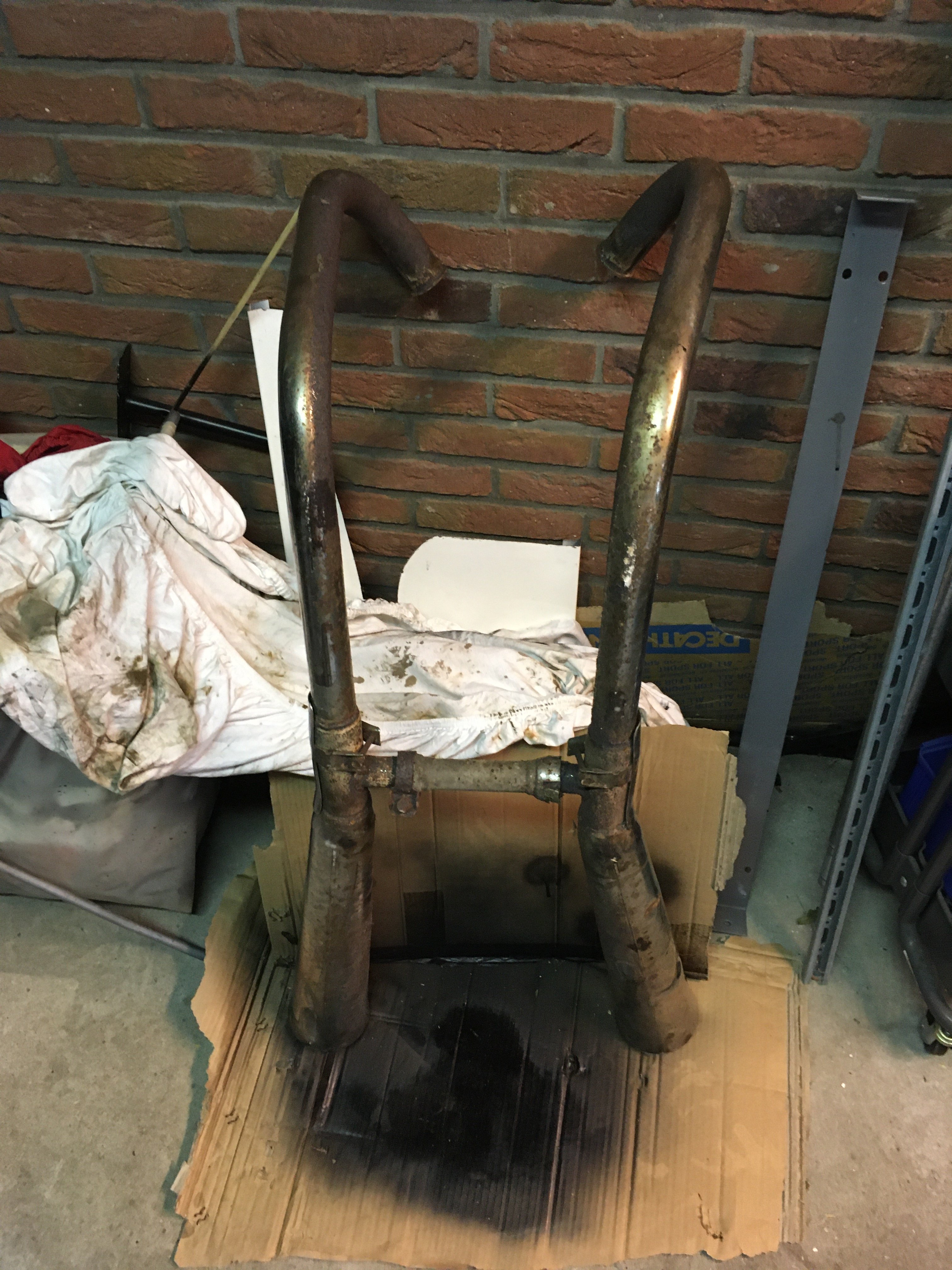 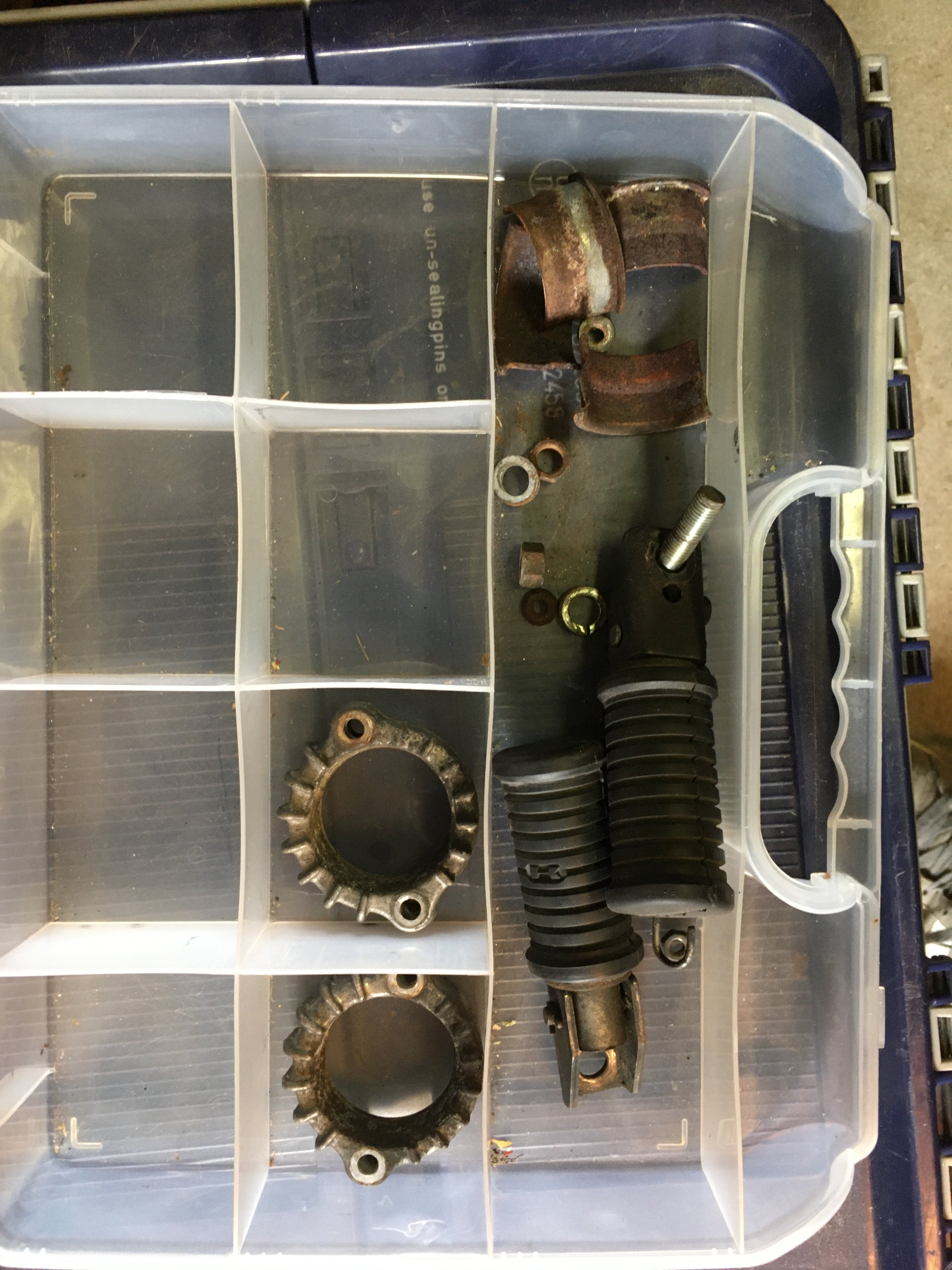 Need to take the rust of, need to patch up some small holes, but nothing I can’t fix ( so I hope ).
Anybody have tips on polishing the rust of?

my dent removal set should arrive next week. Give that a try after I have this running again. And need to fix the seat to the frame and be able to still remove it. already have an idea for that, now to execute it.
Last edited: Aug 25, 2020

getting there; using sandpaper, aluminium foil, water and handsoap.
need some more hours of sanding and polishing before they are done.
Luckely i'm not going for the full blown polish, just want to get rid of the rust build up and major blemishes.
I'm already happy that this works, not a big fan off the exhaust tape option. 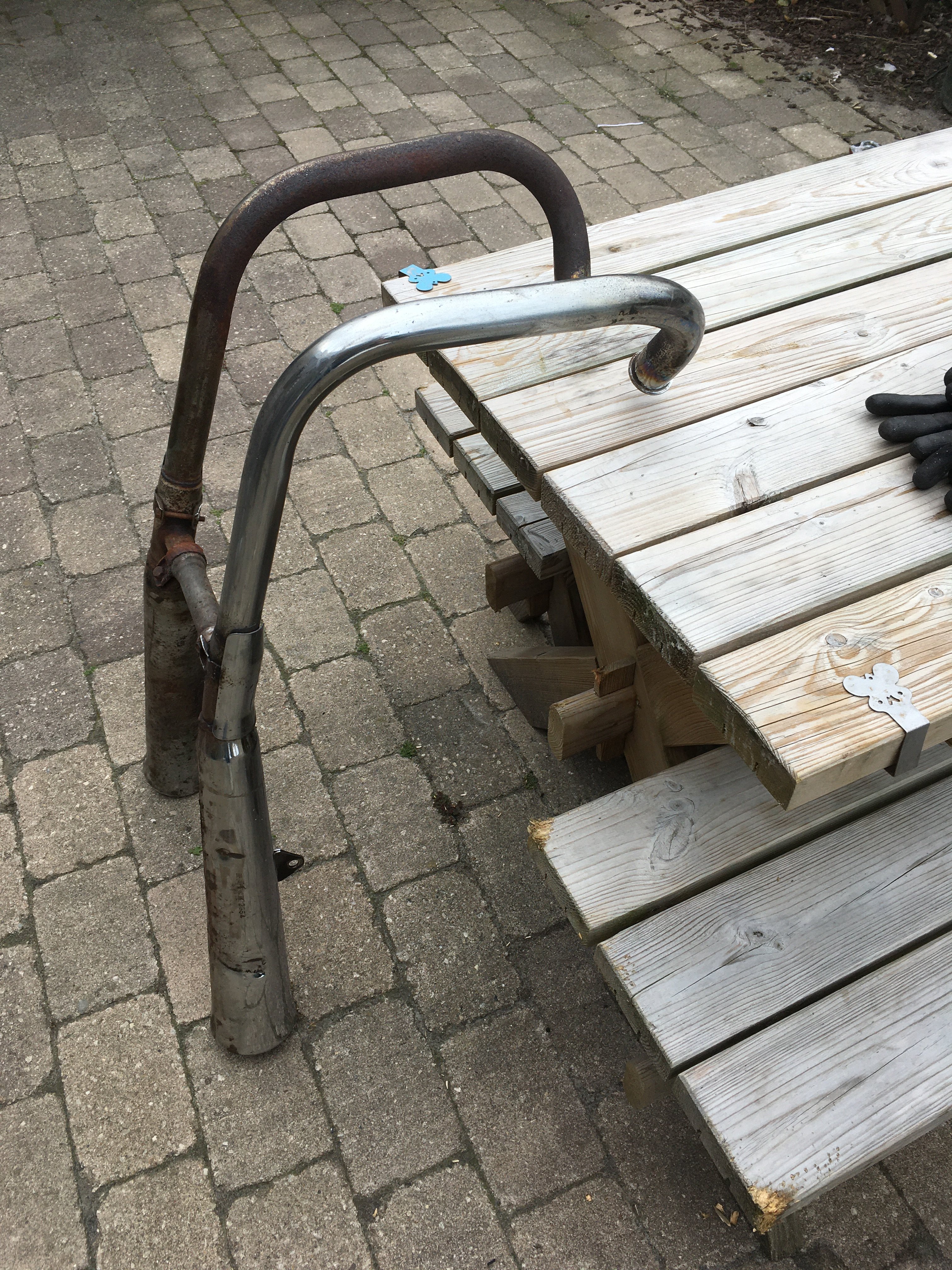 DTT SUPPORTER
The hand work looks good but can take ages.
Cheap and easy rust removal is to use molasses.
A mix of between 1:5 to 1:10 of molasses and water depending how bad the rust is. Submerge the pats for a few days and have a look to see how the part is progressing.
Molasses can be had cheap at farm supply stores.

There are a lot of videos on YouTube of gas tank dent removal. One of my favorites is using sections of inner tube sealed off and inflated in the tank to push out the metal.

exhaust are back on the bike, rust mostly removed and shiny enough to go back on.

in the mean time i've also modified the inner mudguard to fit under the modified rear fender.
Cut of a piece of the OEM plastic part and made a new fixation for it, also relocated the OEM sticker for the tire pressures.
this way it should guard the electronics for water and dirt and it looks nice and clean on the under side. 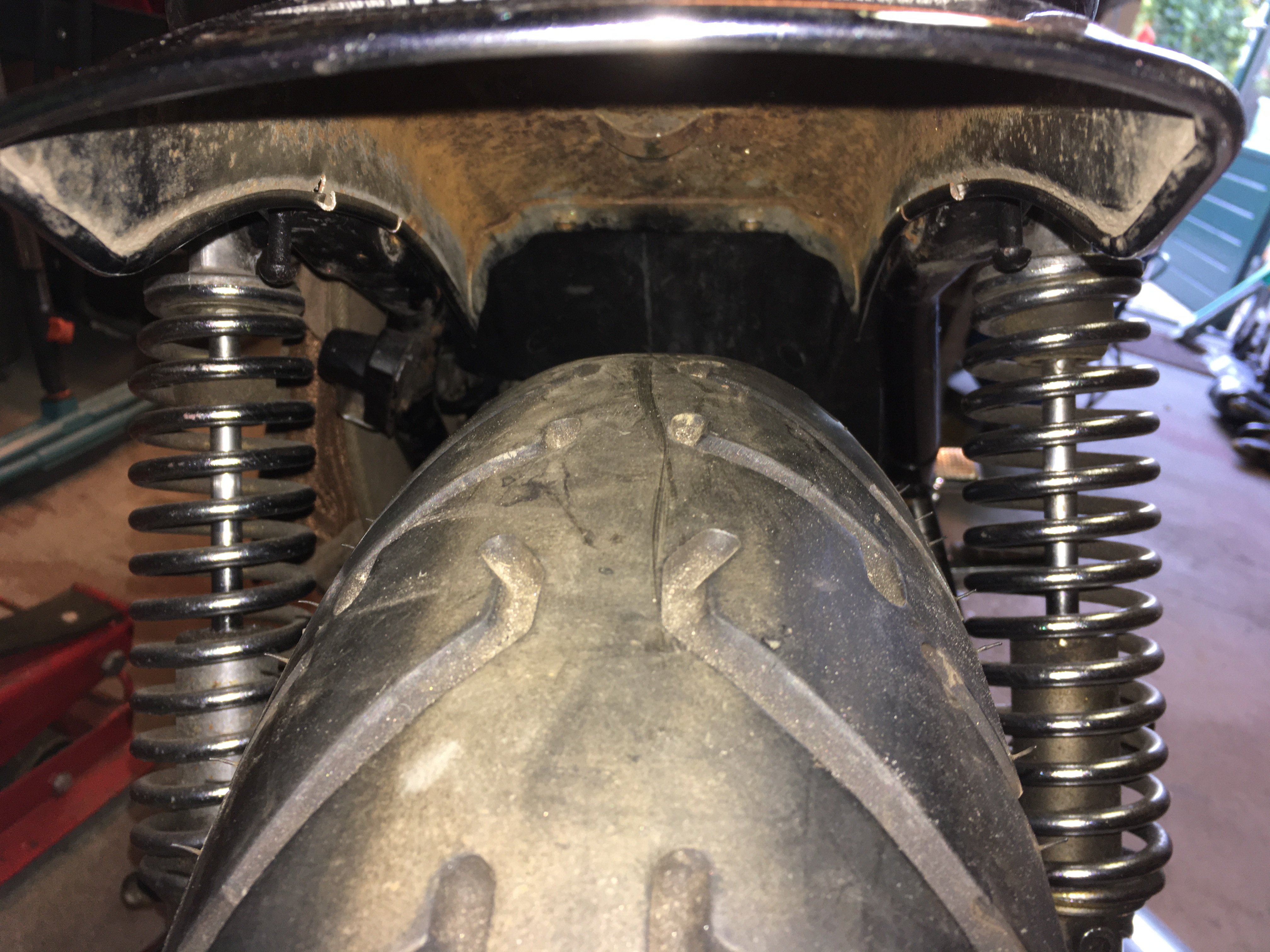 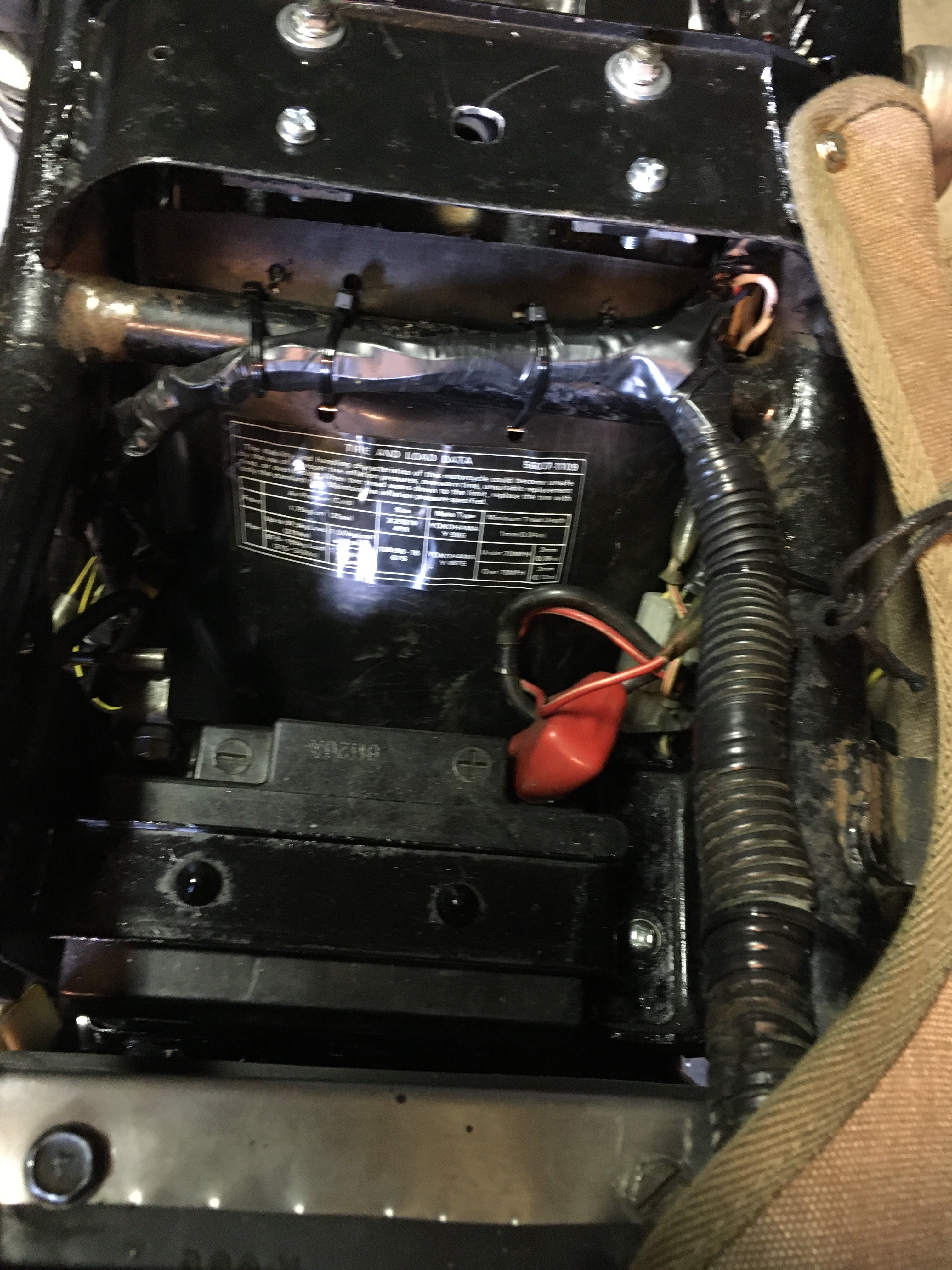 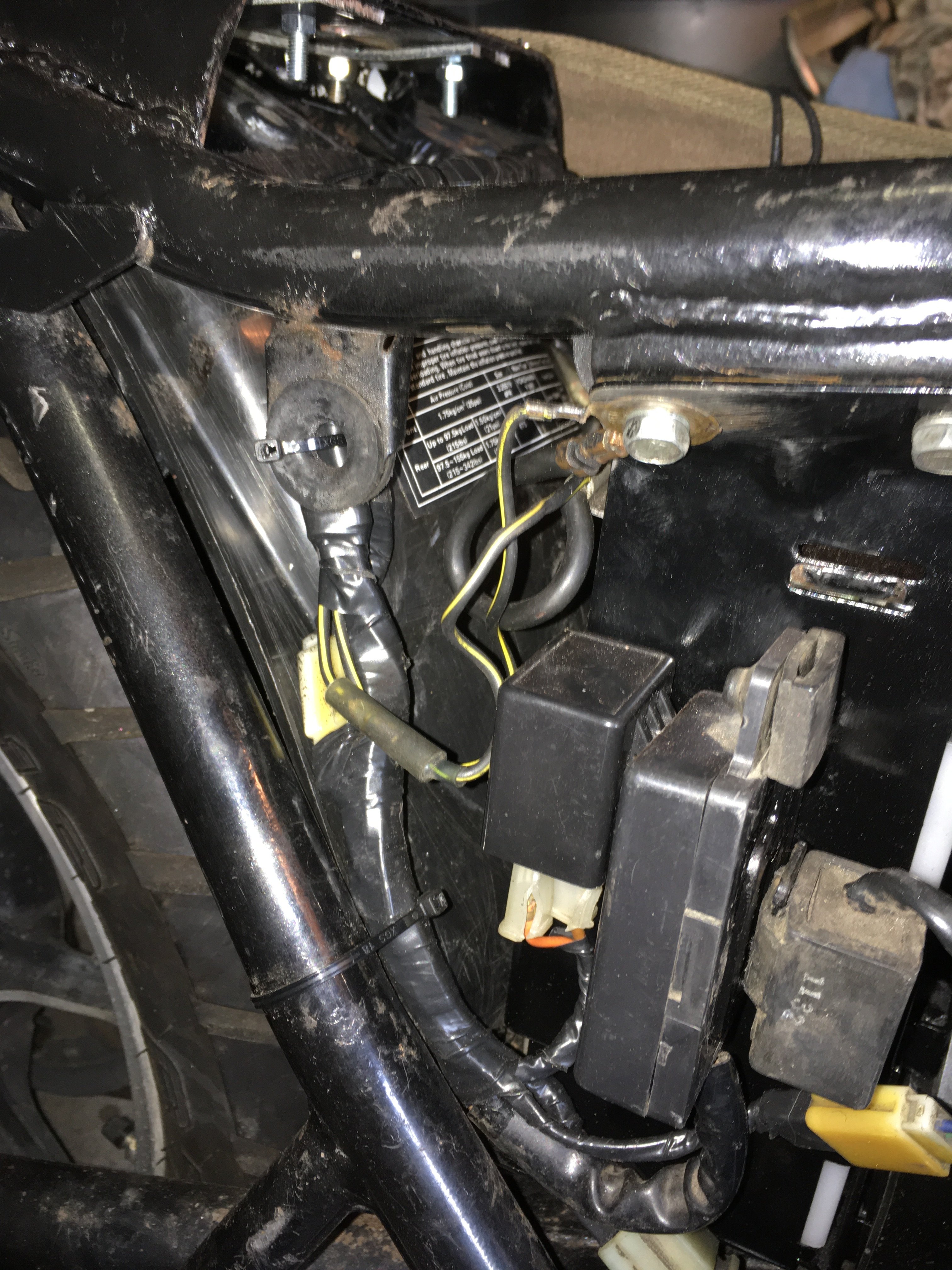 only some small things done lately:

exhausts back on the bike; 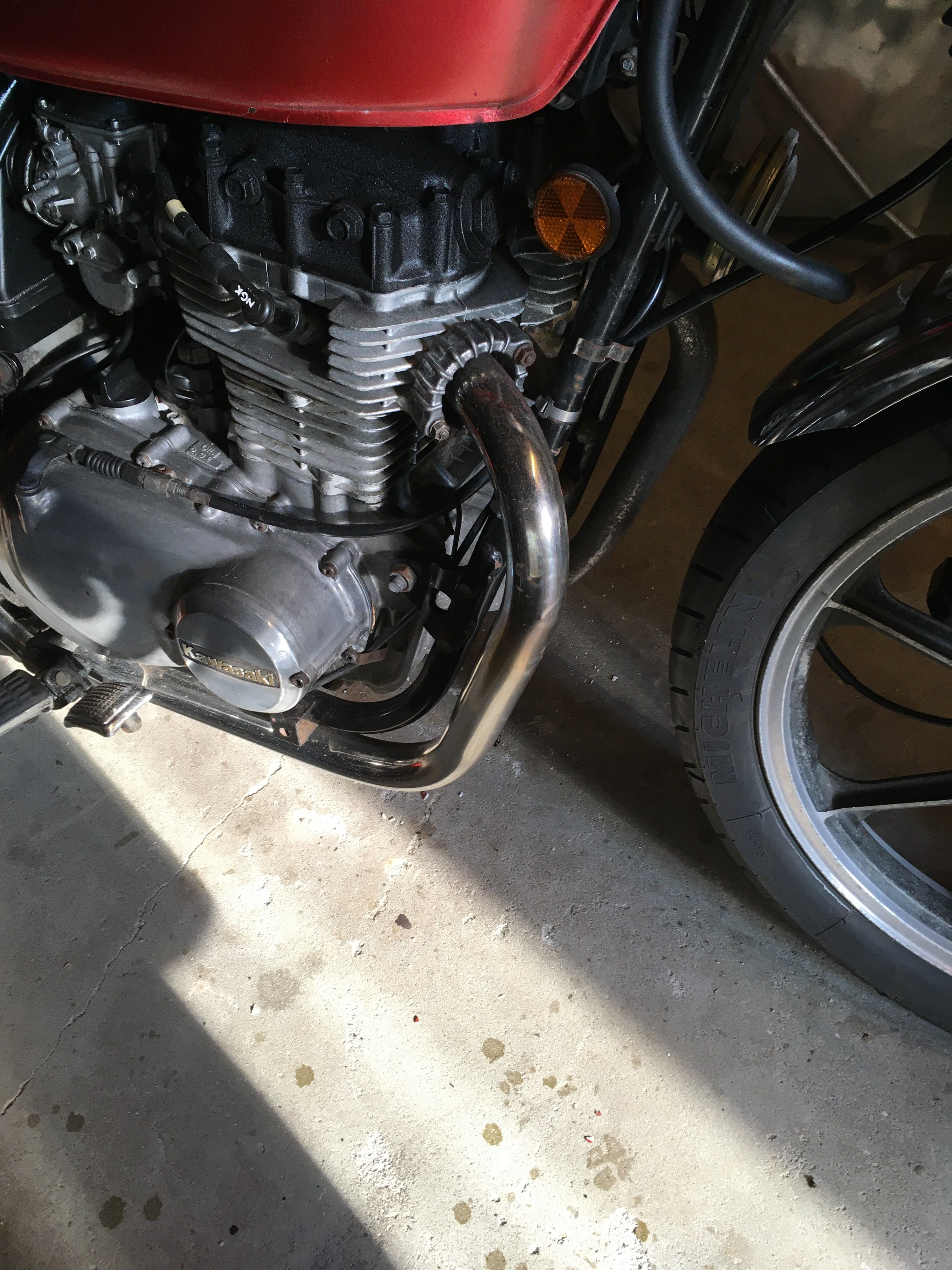 removed the dents as much as possible out of the tank, the cheap tools worked rather well.
With the excaption of the glue gun. That blew up, luckely a paint remover heat gun works better .
It's labour intensive, but the top and side are mostly out. Good enough for me, the bike needs some character 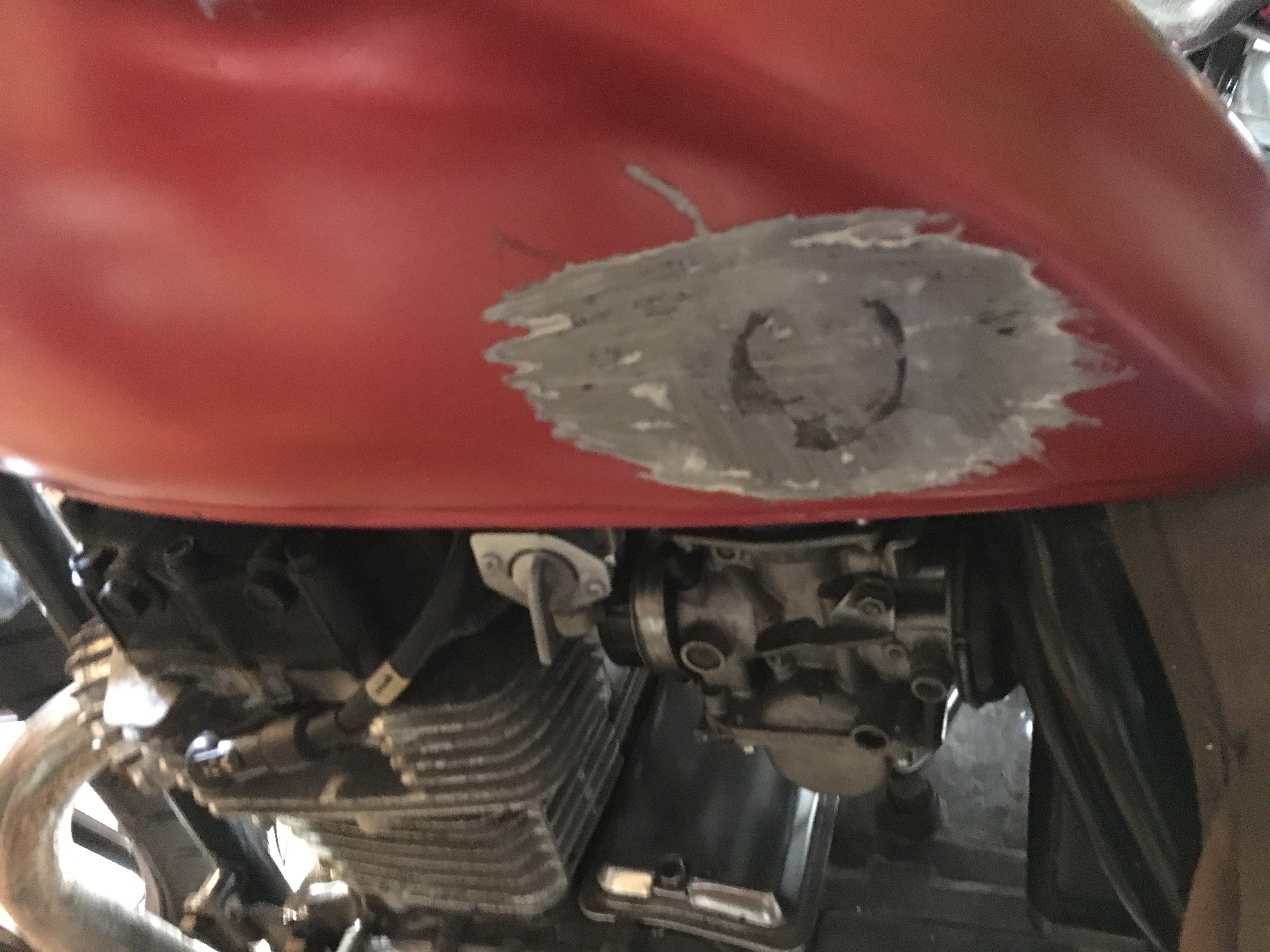 now need to repaint the tank

battery maintenance: refilled the battery now on the charger: 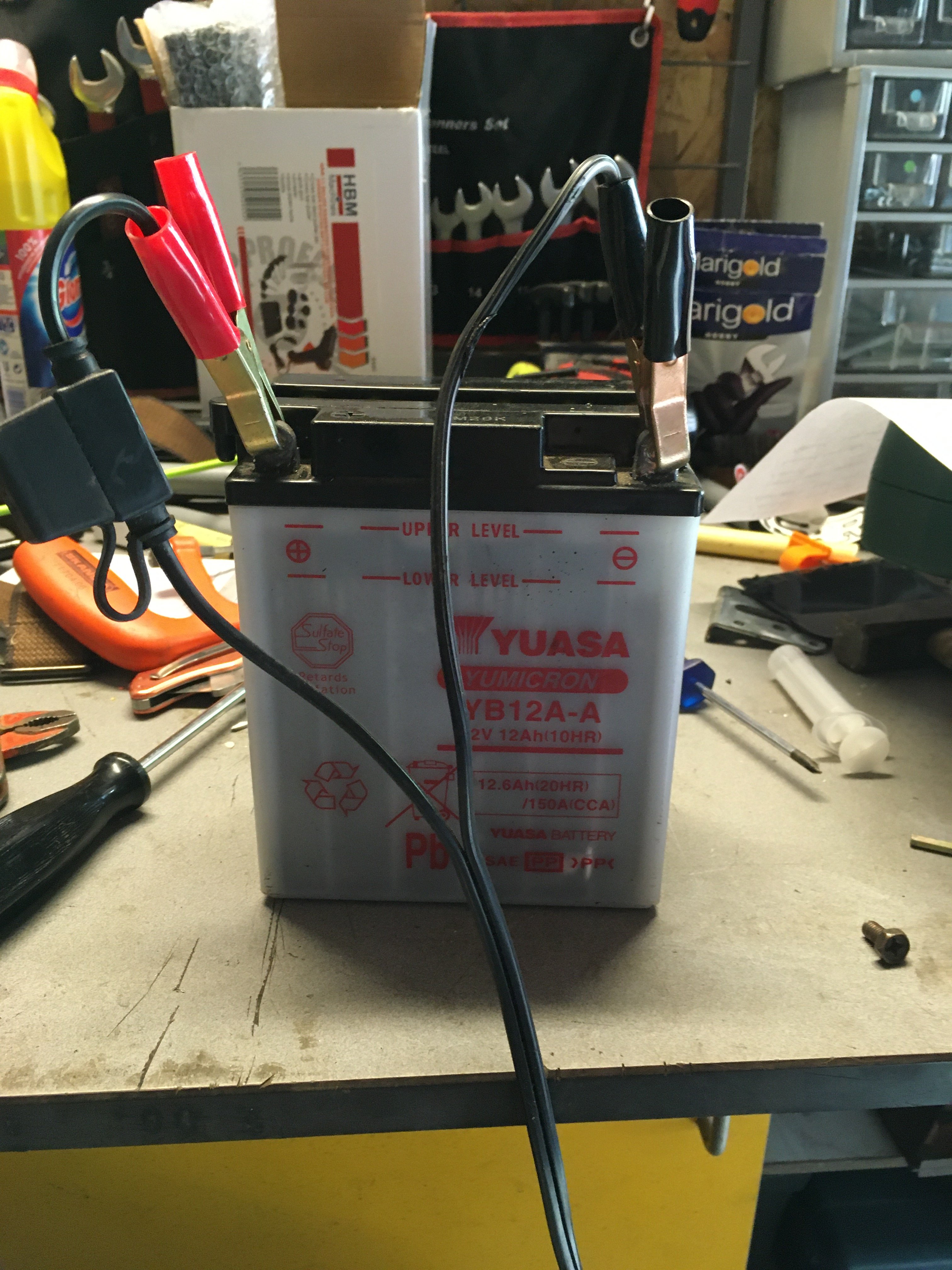 moulded in a bolt for the fixation on the frame and sorted the frame to fit it: 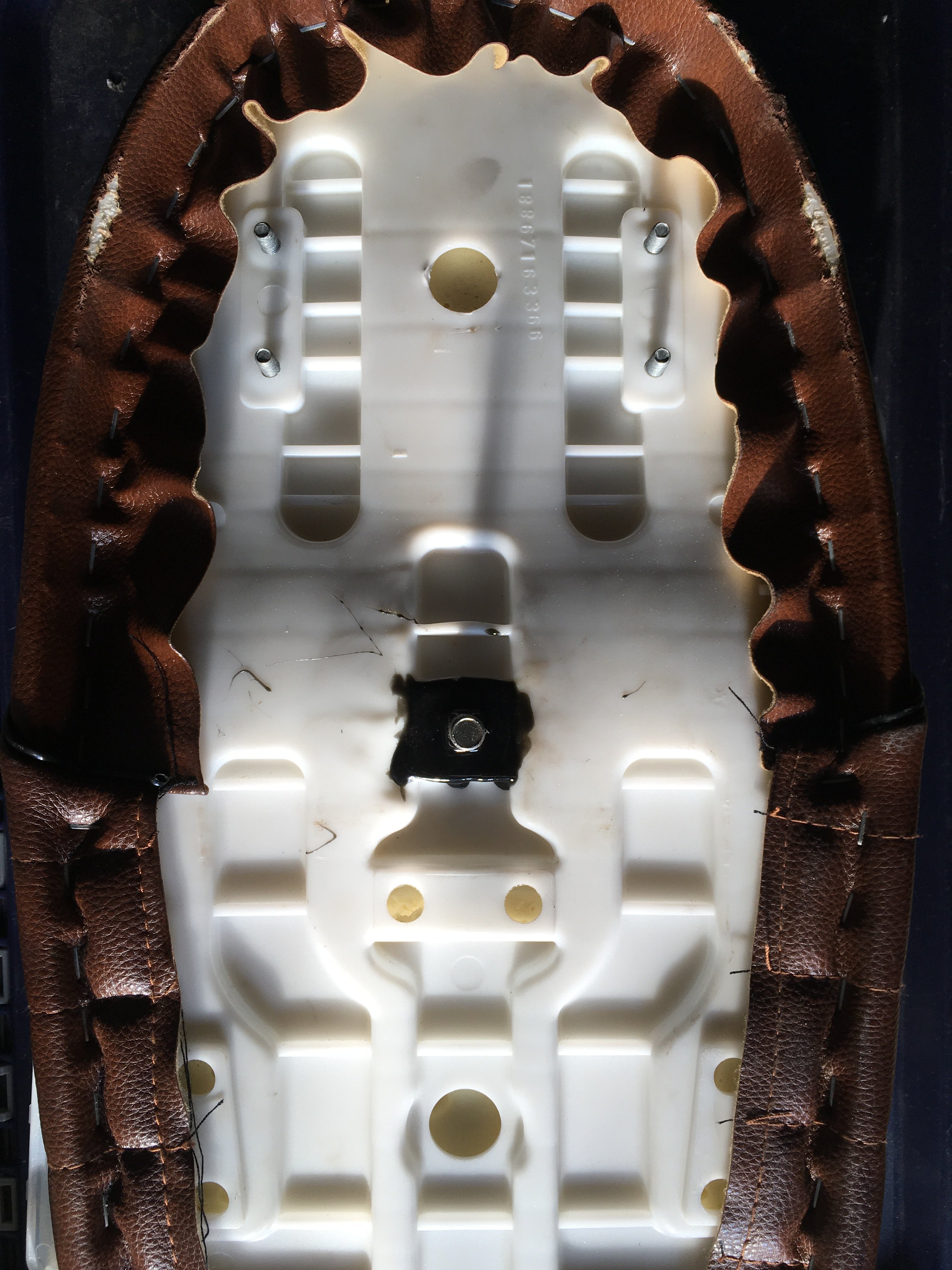 now fresh gasoline and fire it up again!!
the make a license plate houlder, found one i like but it's 70 euro's:
think i can make it myself, 6mm round steel and some sheet metal should do the tric. just need to get the materials. 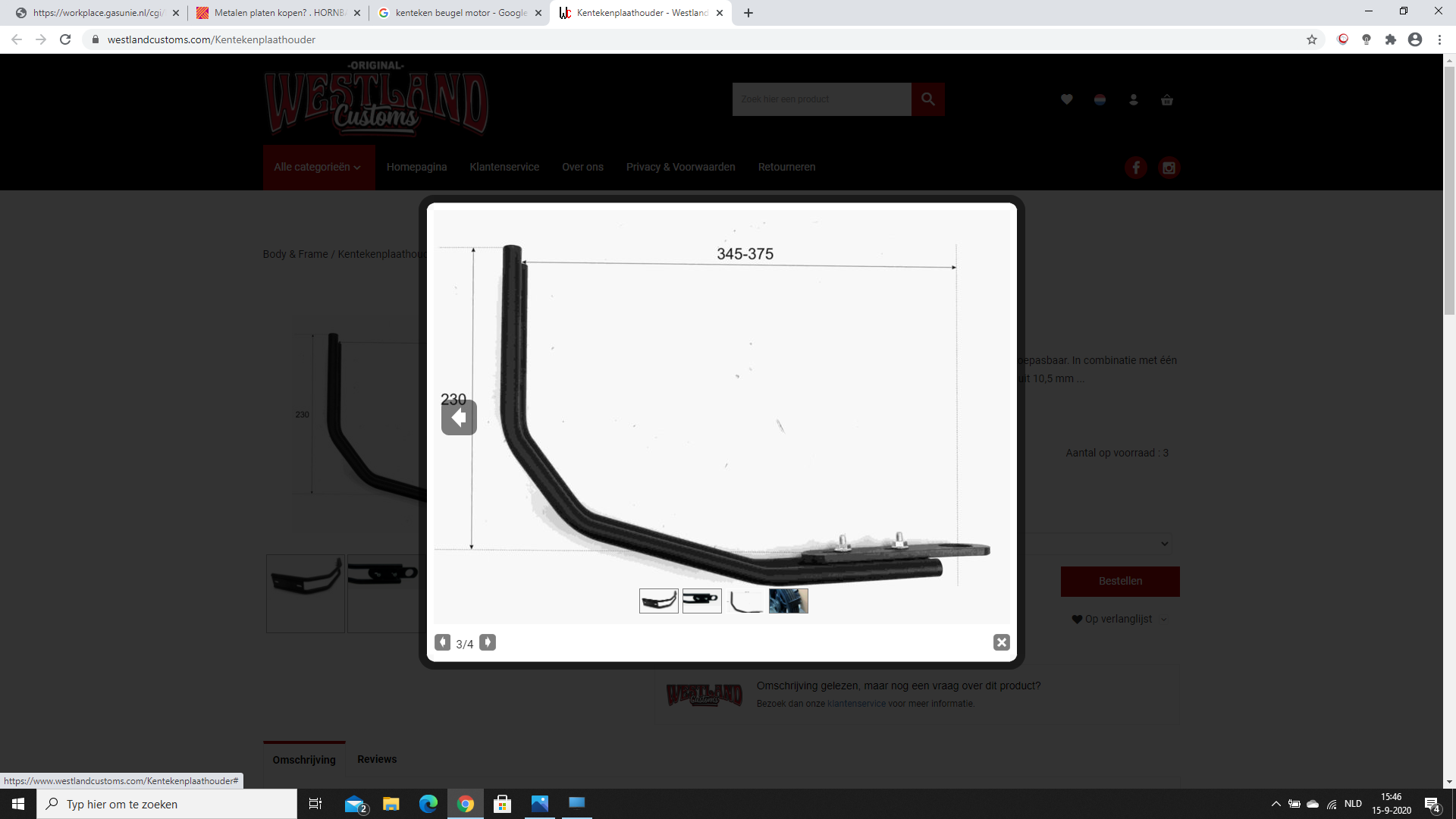 the horrors of the internet made my found a new tank for the bike. A complete kz400 tank.
I always liked the lines of this tank, but never found one with a gas cap and key. 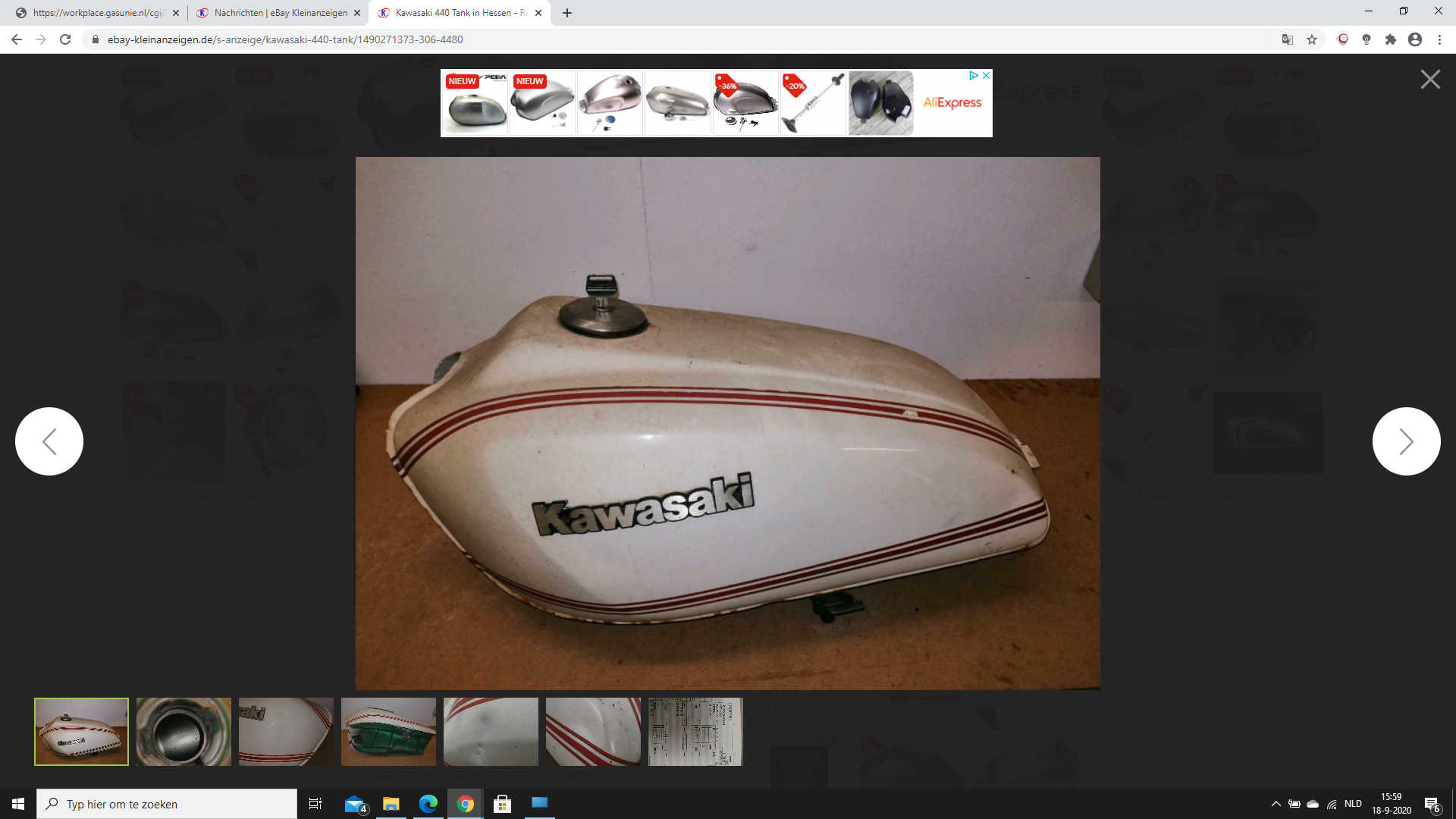 it has some dents and it is repainted but it should be on its way to my house.

Tank came in and did a test fit: 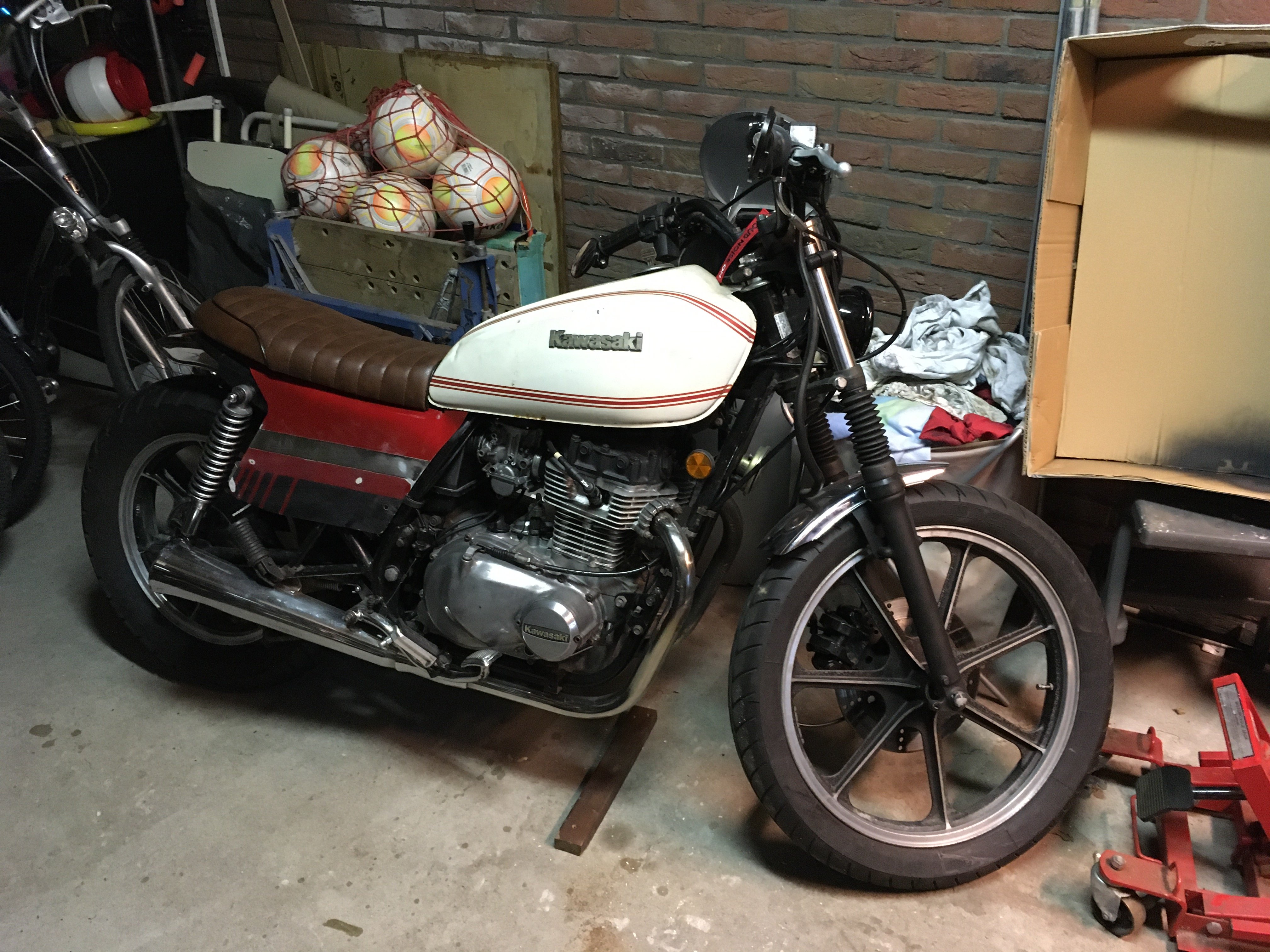 the new tank is slightly longer so the seat needs adjustment to properly fit, fixating is an new challenge and getting the proper line needs some tinkering.

once fitted correct that tank is a huge improvement. I like it a lot.

months gone by without spending to much time on the bike, sometimes life gets in the way, however the last couple of weeks i found some time to pick small bits up again.

mostly working on the new tank to remove the dents.

seat fixation sorted; my first atempt was with a bolt not long enough so that i could fixated it, found a new bolt and an screw nut to lock it in place: wheel clearance is good and seat is locked, one problem solved. another little project was a skid plate, however i miscalculated so after it was finished i could scrap it.
new ideas for fabrication are a new idea for the skid plate, a removable lugage rack for on the back and, find a way to properly mount the new gastank.