Thank you very much.

Just came in from taking mine apart and all balls are there and look decent. I need to clean all the grease off them and have a closer look though. I think the reason for the notchy feel was that the bearing adjustment nut was totally loose. Not even finger tight, just there, and because of this when I took it off there was one bearing on top of the others, very strange. Also, there was a bit of wire (like thin coat hanger type) around this nut, no idea of its purpose. And to think the guy I bought it off was riding it around like this, scary. I need to check the races as well when I get the grease cleaned off.

As I mentioned in above post, I removed the steering stem and bridges this evening. Besides the top bearing nut being ridiculously loose, everything upon initial inspection seems good. I'll take a closer look tomorrow when I clean all the parts. I did strip the upper bridge of its paint. I just need to sand down the casting lines and it'll be ready for paint. 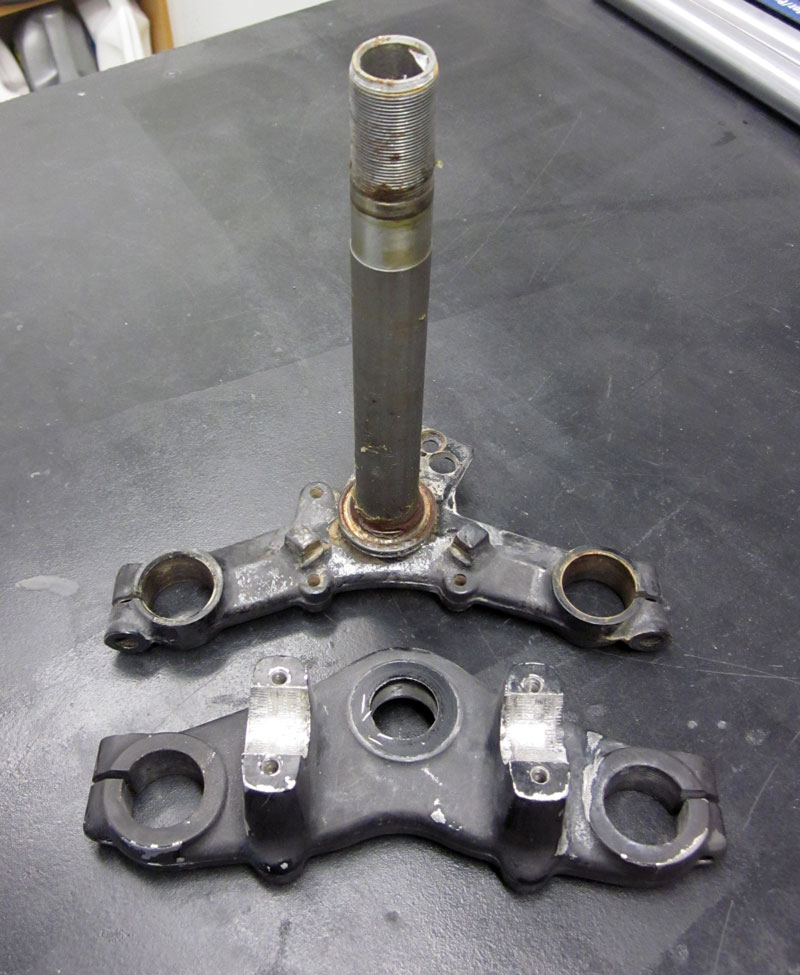 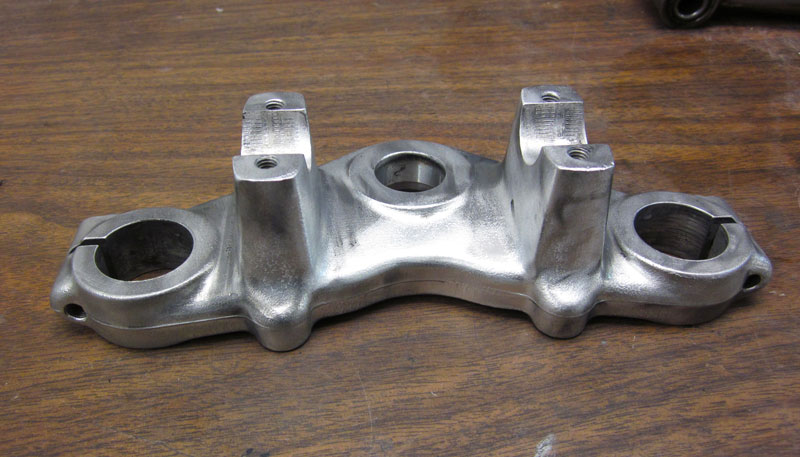 Wondering about a couple of things on the lower bridge. Is the right hand square section pointed at in the below picture just for the steering lock box? I'm not using mine so if that's all its for I'm going to cut it off.

Also, what is the threaded hole, pointed to on the left of this picture, used for. My bike was pretty sparse when I got it so I'm not really sure what normally is attached to this. Any ideas? 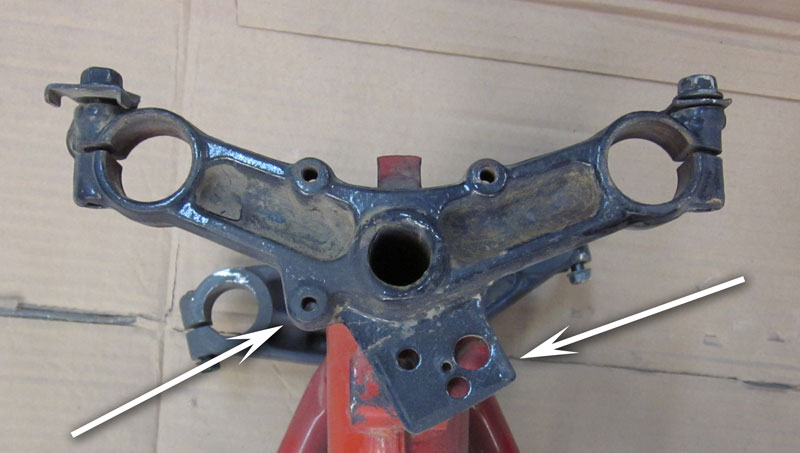 yes, the steering lock is attached to this bracket. You should see a matching lock bracket on the frame where the lock barrel hits. Not sure about the threaded hole, but for assembly I always check the parts list on this site: http://www.motorcitypowersports.com. It will show how all the parts are assembled and sometimes even specifies the bolts (thread, pitch, length). I would just leave it. You can use it for a bracket to hold the speedo or brake cable, which it may be used for anyway.

I have been following this build on here and on 2Stroke. Keep up the good work, sir.

For the swingarm bushings, you can try a local auto shop like NAPA. Some have a machine shop and if so, will have a 20 ton press. They'll charge about $20-25 per job. If you have the new ones, they can press them in at the same time. Are the bushings the rubber type? Can you get upgraded solid bushings? That will improve the handliing and stability.

Thanks for the info eyhonda. Yeah, the bushings are the rubber type. The current ones are in good shape I just wanted to get it all done while I was at it. For now, I'm not going to bother though as I can't really afford to pay anyone to do it. If I find any issues when I ride though I'll have to deal with them. Only a couple of minutes work anyway to remove the swingarm.

As I've stated before, this poor bike was not well taken care of and seemed to have spent most of its like as a dirt bike. This is most evident when looking at the center stand. Both feet have been tore off or just plain wore down and the legs look like they were used as a play toy for a Great Dane ;D I probably could have picked up a decent used stand for cheap but wanted to see what I could do with this one first. So my plan is to clean up the legs a bit to smooth out the nicks and to weld on some feet.

Here's how the feet look. Even like this the stand still worked fine but just never raised the bike enough and was a bit unstable. I have a feeling the center stand spring was weak and this allowed the stand to drag along with the bike. 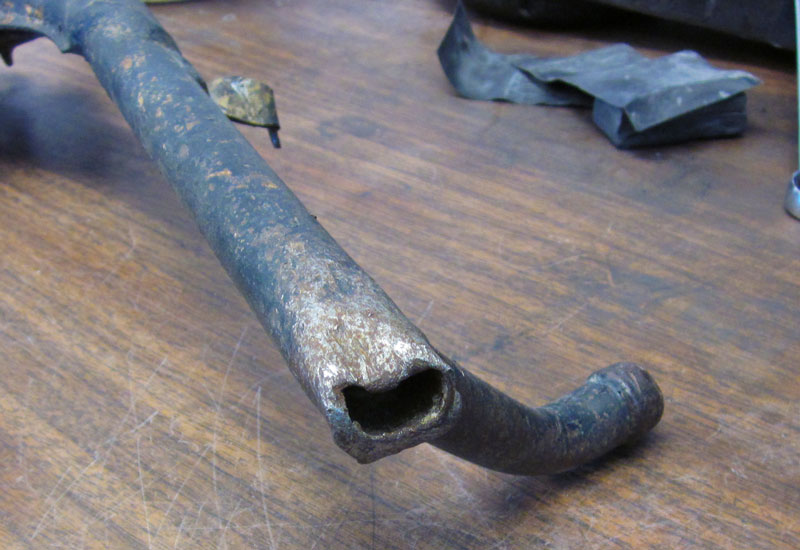 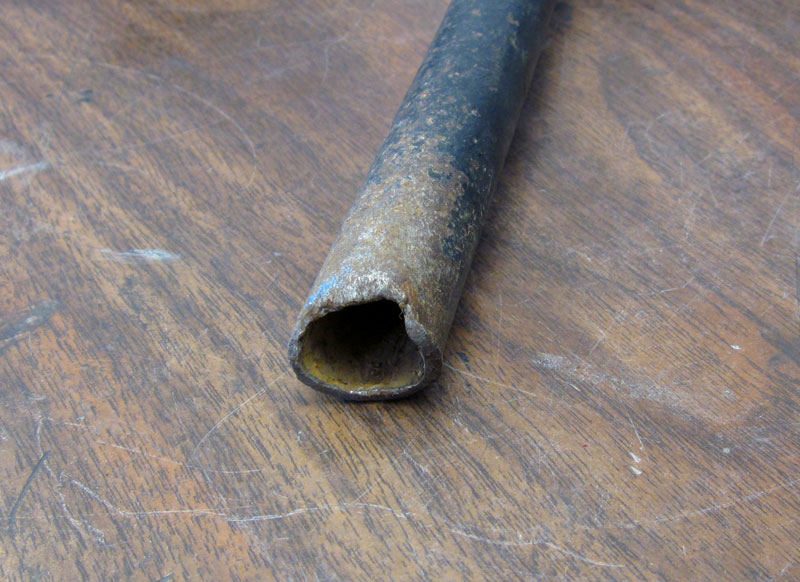 Pics of the chewed up legs. 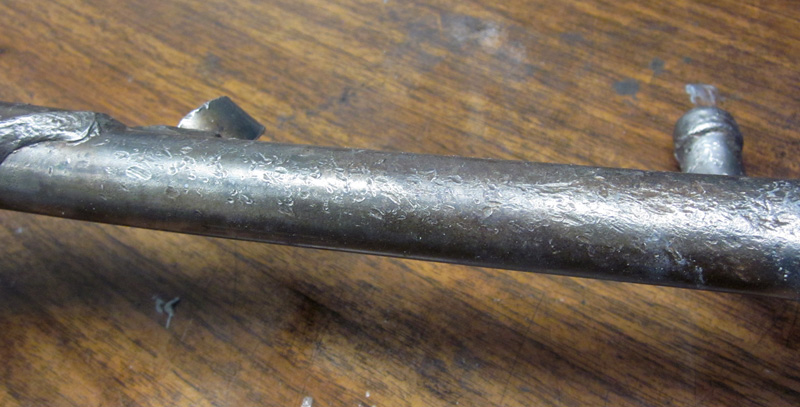 Just dug out the 350 parts from the moving boxes, need to get them both separated from the wiring harness and see how they look. I'd like to eventually get an Acewell or Vapour gauge but for the time being this will have to do. 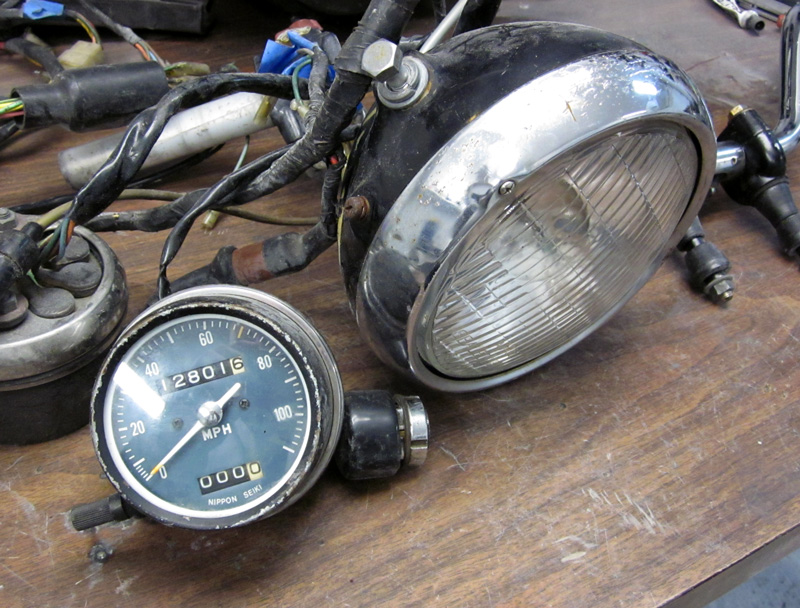 
HerrDeacon said:
As I've stated before, this poor bike was not well taken care of and seemed to have spent most of its like as a dirt bike. This is most evident when looking at the center stand. Both feet have been tore off or just plain wore down and the legs look like they were used as a play toy for a Great Dane ;D I probably could have picked up a decent used stand for cheap but wanted to see what I could do with this one first. So my plan is to clean up the legs a bit to smooth out the nicks and to weld on some feet.

Here's how the feet look. Even like this the stand still worked fine but just never raised the bike enough and was a bit unstable. I have a feeling the center stand spring was weak and this allowed the stand to drag along with the bike.

Pics of the chewed up legs.

wow them pics bring tears to my eyes i would deff say Abused .. keep up the Humanatarian work


intrudin said:
wow them pics bring tears to my eyes i would deff say Abused .. keep up the Humanatarian work
Click to expand...

;D I'm starting to think I'm the SPCA of abused bikes (like a lot of us). All the bikes I've owned have not been treated very well. Works out for me though as I get them cheap ;D Going to try and help this old girl feel and look good again.

lol 8) Had a set back to-day I went to pick up my Long engine mounting bolt ($3.25) and Piston rings ($29.oo) from my Honda dealer..and was told the piston rings are discontinued
Im thinking the bore looks good maybe i just use the ones i have how can i check the rings????

That sucks, however I'm sure I've seen them on eBay UK before. Not sure if the European model used the same rings or not but worth a look if you find yours needs it.

Just read through this, I have been away for a while and missed this one. I am glad I found it, looking great! I can't wait to see more!

Have the stand done and painted. Came out pretty good. Far from perfect but I'm happy with my first welding job ever. 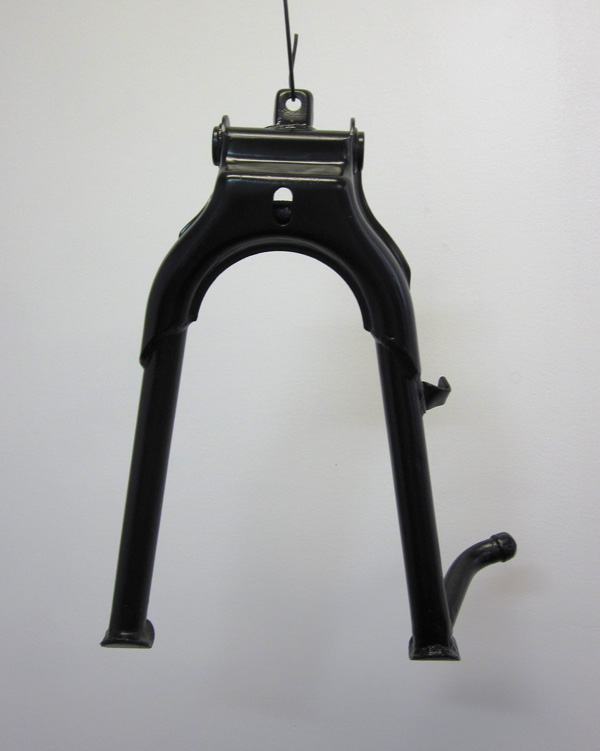 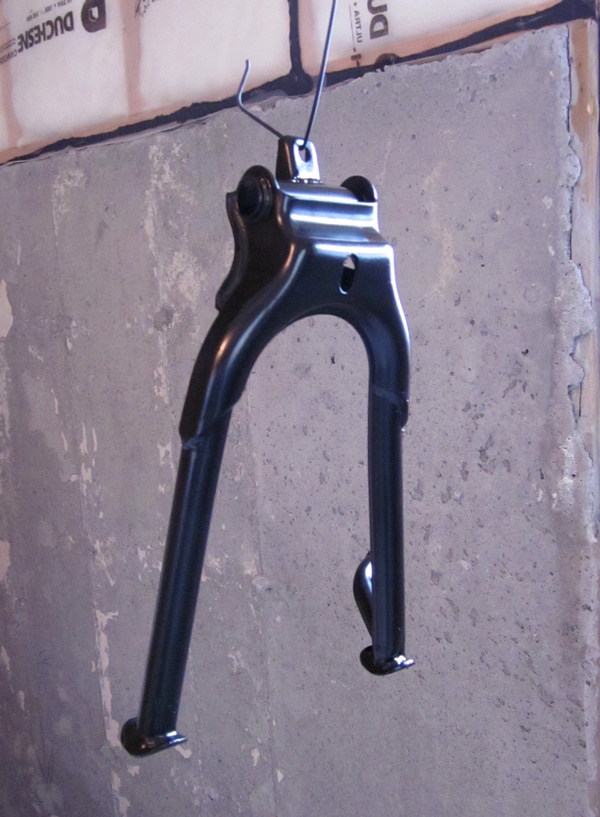 I never intended on doing much of anything with the engine for this part of the build. Was just going to clean it up, give it a coat of paint and then the following winter (or when I had some money) I'd strip it down and do it right. I wasn't even going to take the clutch cover or anything off. That changed today when cleaning up the mess in the garage. I had the engine on the bench for the past month or so and I noticed it was leaking a bit of oil, which I found odd since it never leaked a drop before I disassembled. After cleaning the outside up a bit I noted the dreaded JB Weld Not a good job either as the repair is not totally flat and so the leak.

So I took the clutch cover off for a closer look and found a couple of other small issues. The hole repaired by the JB Weld was on the edge of the clutch cover but the damage was also on the engine case itself. This was 'repaired' with silicone

Also, the kick starter spring has a nice wear mark on it, not yet sure of the reason. Before disassembly the bike started fine with no issues or weird noises. Fortunately this part is pretty cheap and available so I'll replace it for piece of mine.

After I had the clutch cover totally cleaned up I noticed a crack on the inside. By the looks of it, it seems to be caused by an impact from the outside pushing inwards. Probably a rock or something.

Don't have the cash for a new cover, but all these issues should be fixable. This bike better be good to me for saving it from its previous life

Here's a pic of the clutch cover damage, JB Weld and spring damage. 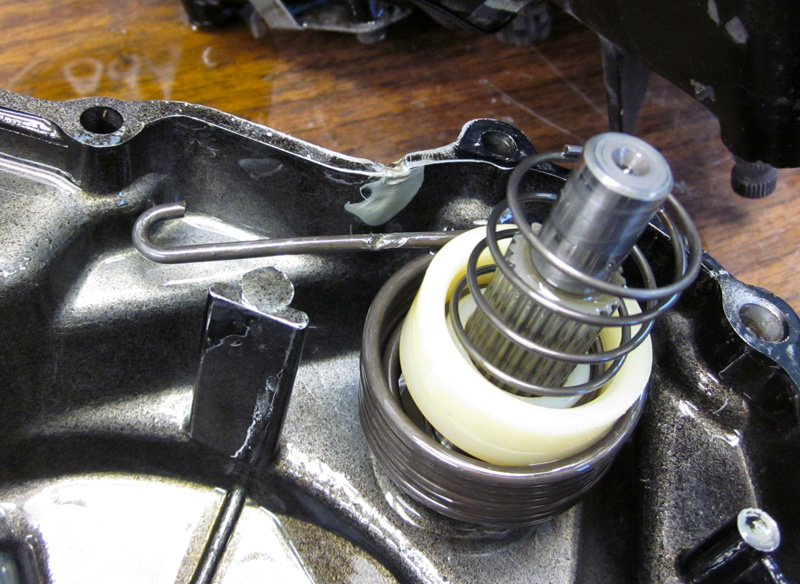 Chunk chipped out of engine case. 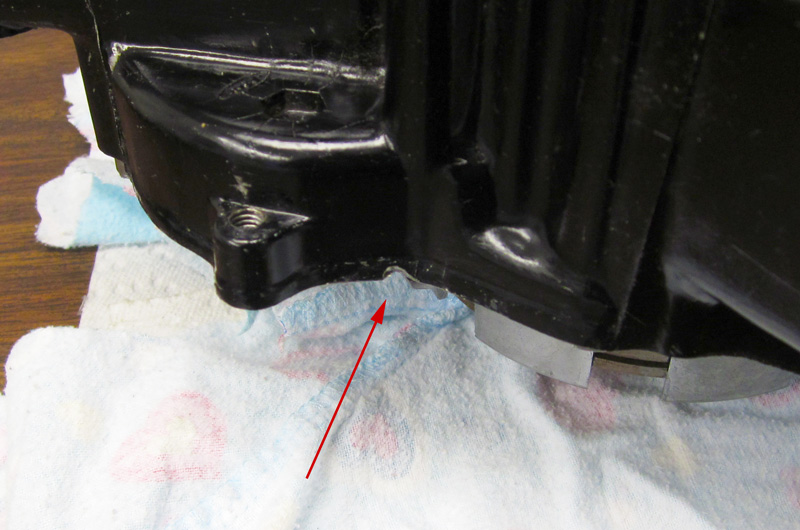 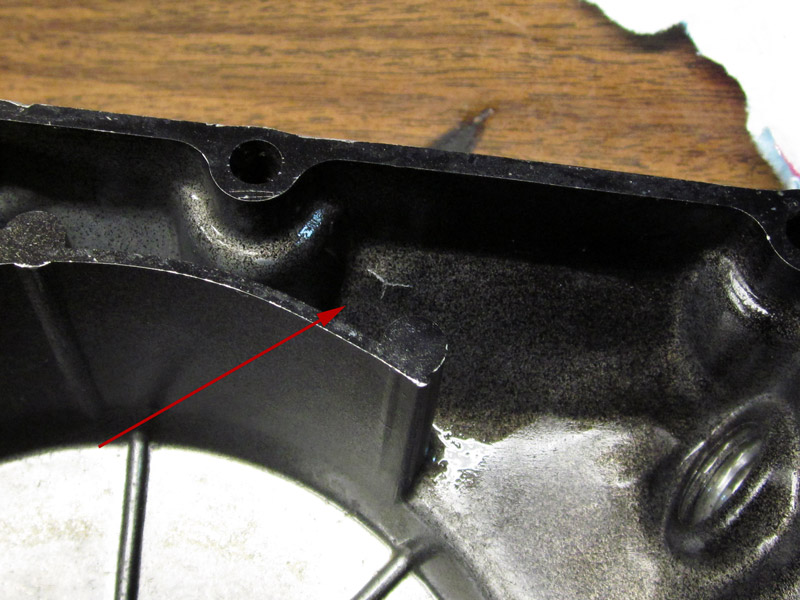 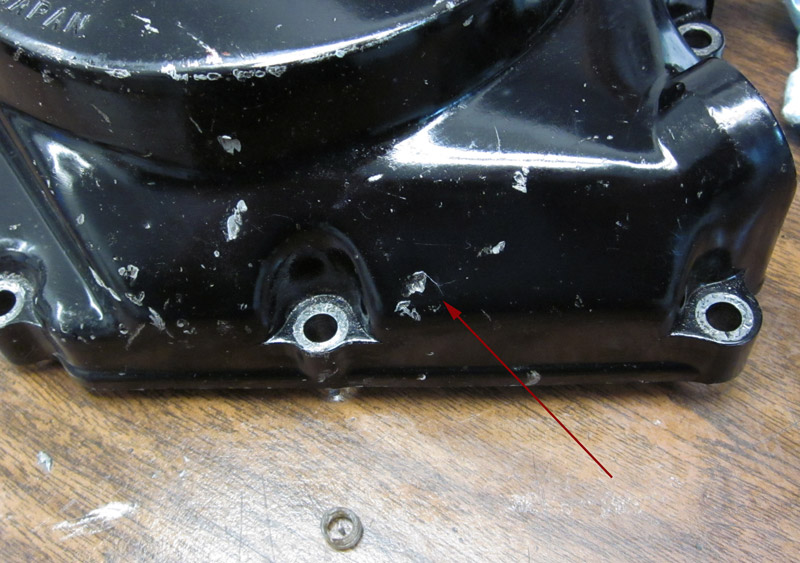 Might be worth just checking how much a H100a engine would rush you, to use as a comparitive costing put against the time and costs involved in overhauling the 50 engine. Cos as soon as you bust that open it'll be like pandoras box and there's way too many exciting things in there that will suck all the money out of your wallet. The H100a was a high volume commuter in lots of Honda world markets, so the engines must be quite easy to get hold of. Then you could do the MB5 motor over a longer period and it not hold you up from tripping the light fantastic.

Would love to swap in a H100 but chances of finding one around here is slim to none. Always have my eye open but seriously doubt I'll find one.

Spent the last week or so painting a number of parts. Still have a few smaller parts to prep and paint, but I now have all of the larger pieces done. Finished the frame, so now I can slowly start to turn it into a roller. There were a few things that I never had time to mock up prior to having to tear it down, so once I have a roller I'll start in on those. They include gauge mount, headlight ears, licence plate bracket, and a way to mount the seat pan.

Will be ordering tires this week, so in the meantime I'll assemble the rear shocks and forks, so I'll be ready to go when they get here.

Here's a pic of the frame. Probably put the trees on this weekend. Have to say that, with the exception of wiring, I enjoy every activity with working on a bike, but there's something about when its time to start adding things back on the frame that I love. Looking forward to making it look like a bike again. 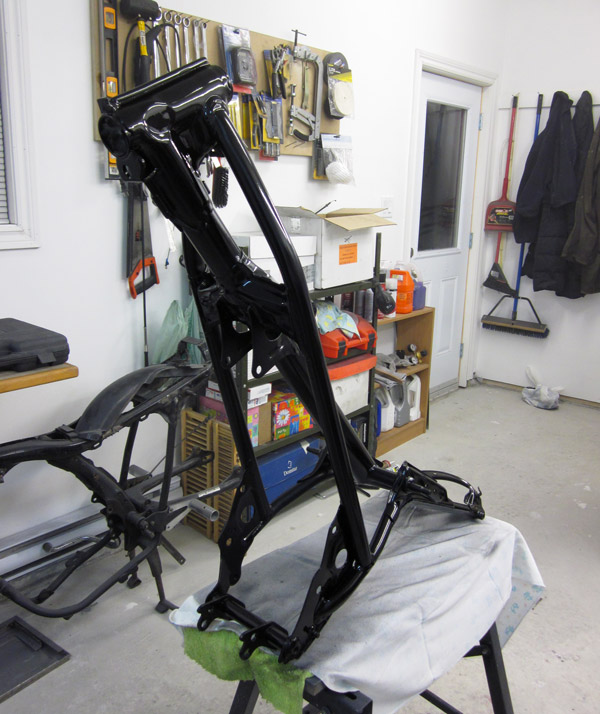