on the master? I sprayed brake cleaner through it. it is completely unobstructed.

I'd also run a high E electric guitar string through it just to be sure.

DTT SUPPORTER
DTT BOTM WINNER
Little update here. I swapped for the bandit 600 cable clutch. Took a bit of fiddling to get the push-rod the right length, I had to chop up the B6 cable to shorten it but everything is working quite well although it has a heavy pull with the HD springs.

I have put several hundred miles on the bike and it is performing very well and is fun to ride. It gets stares and thumbs up unlike any other bike I have owned. I had some young kid desperately trying to get me to pull over for like a mile just to tell me that one of my headlights was out, to which I pointed out to him that there is only one and its offset. haha

The other day i was riding around and didn't realize an ambulance was behind me until he honked at me - felt like an ass. I need to get a mirrors on there. I bought a set of cheap emgo replacements, but the mounting points will interfere with my quick release fairing unless I push them forward. To compound that the mirrors are enormous and giant mirrors will screw up the street legal racer vibe im going for.

I have been thinking about some smaller round mirrors. I would really love a smaller version of the OEM one, but i haven't found anything. 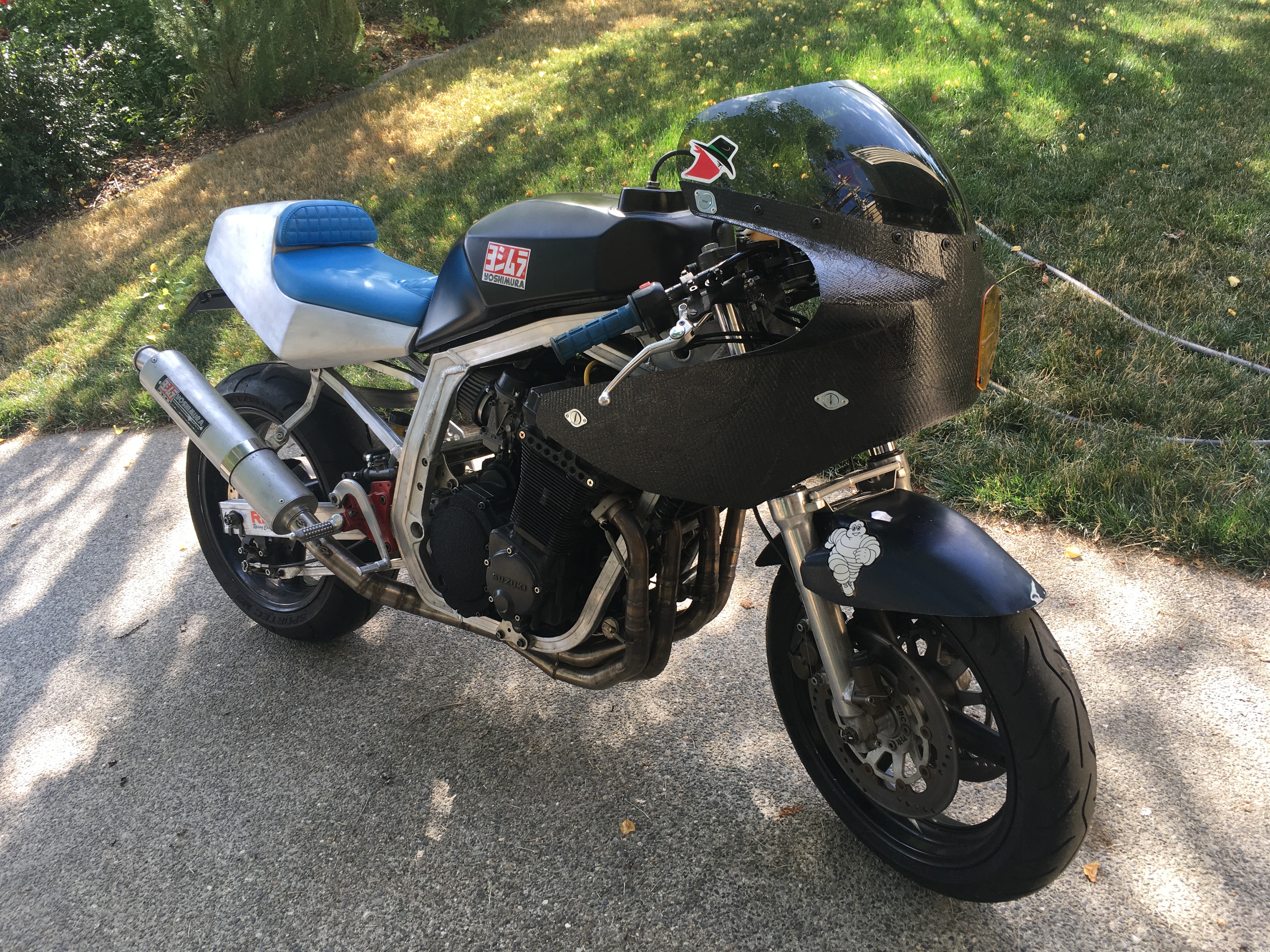 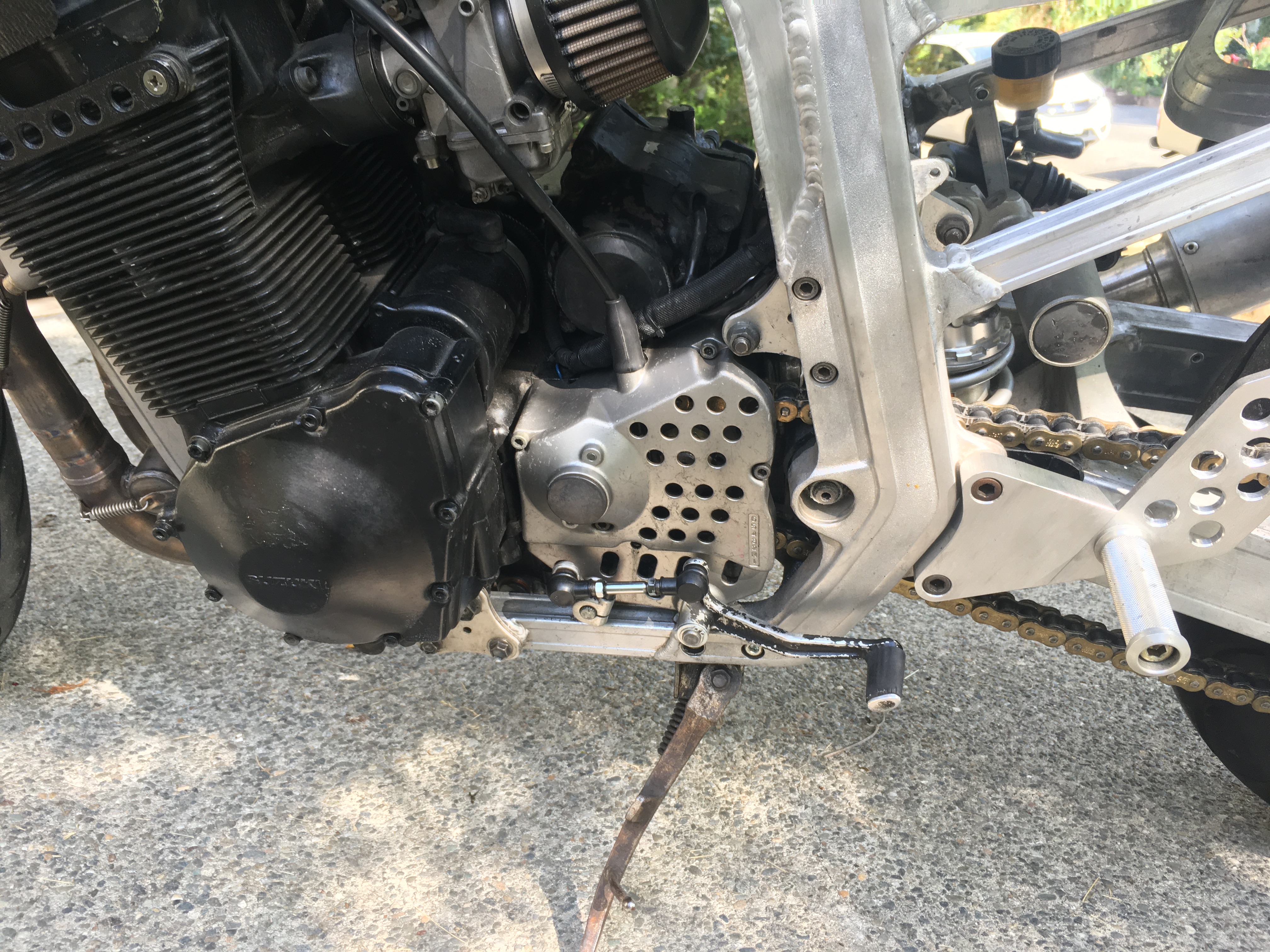 DTT BOTM WINNER
It sure has been quiet in the forums lately. Sweet ride Doc.

DTT SUPPORTER
DTT BOTM WINNER
The wet weather is here so the bike is off the road for the season; so there are a bunch of little things that I want to address. One of them is I have wanted to brace the swing-arm from the beginning of this project and finally got around to it

I used the brace off a CBR 900 swing-arm for the main hoop which i cut and shortened. I fabricated most of the pieces from 6061 sheet, I used 5556 filler. The bracing ended up being a bit a-symmetrical because i wanted to do an "over brace" and fitting around the chain run and the R1 shock reservoir got a bit tricky. I also boxed in the shock mounts. The cast portion of the stock arm was VERY difficult to weld to; its extremely porous and despite grinding down to bare metal there was quite a bit of contamination in the puddle. I'm not the best aluminum welder but i got it it done. I saved the most visible welds for last so i could practice up. All this bracing added 2lbs 4oz, however most of this weight is close to the pivot point so it has less of an effect on un-sprung weight.

I'm thinking about fabricating some type of rear tire hugger/chain guard, but don't know if i care that much. DTT SUPPORTER
DTT BOTM WINNER
The new swingarm bracing was interfering with the muffler hanger so i remade it. looks way cooler than before. I also fabricated some spools to use a pit stand. DTT SUPPORTER
DTT BOTM WINNER
I decided to do the fender hugger. Getting close to having the plug complete. DTT SUPPORTER
That's cool Doc, coachwork is one of my favourite things to watch (maybe one day I'll learn how to do it and have a go myself), looks great

doc_rot said:
I decided to do the fender hugger. Getting close to having the plug complete.

I always wonder if I do things in a way that makes sense, then I see you have a similar process, which makes me feel so much better about how I work.

DTT SUPPORTER
DTT BOTM WINNER
Its not the fastest method but it yields good results.

DTT SUPPORTER
DTT BOTM WINNER
Update - got the EBC rotors resurfaced by Tru Disk. amazing work as always. I bought a press brake kit from Swag Offroad, made some radius dies for it and started bending aluminum. Any guesses as to what i got in the works? Filing that fender method away for future use. Slick

DTT SUPPORTER
DTT BOTM WINNER
Carbon Fiber Yoda came through and finished the tire hugger for me. While he was at it he took a positive off the front fender as well so the fenders match. This type of mold making doesnt yield the cleanest results, but the parts are strong, light, fit well, and look pretty good. I still need to trim them down some more and they probably another coat of resin and a cut'n'buff to be real nice.