Lurking with intent to loiter

bvander said:
My vote is for the Stoye II. They are a damn sexy looking car. Nice work on collecting parts BC.
Click to expand...

I change my mind [ as usual ! ] on a weekly basis ! The only problem with my donor chair is the depth of the body. It is more suited to the Meteor I think, as the proportions of the Stoye2 are more "upright".

Plenty of time to think about it as there's several projects need completing before this one. Thanx for the encouragement.

My German pal at Motex just sent me a copy of the first issue - fascinating !

What is it called? Just so happens I speak German.

lingo said:
What is it called? Just so happens I speak German.
Click to expand...

It has a 9.80 Euro cover price. www.motorradstrassen.eu. for more info.

Thanks, i will look into it

lingo said:
What is it called? Just so happens I speak German.
Click to expand...

Also - due to outside influences [ health mainly ] I have had to cull / back burner some of my projects [ posted elsewhere ], so I will just sit back and view what you other charioteers are up to instead.

Going to try resurecting this thread, thought about starting my own and will go that route if needed but.....
I've had a vintage kneeler racing style rig for the street rolling around in my head.
http://blogs.motorcyclistonline.com/vintage-sidecar-roadracing-2485.html#axzz2gy2YoRBH
Either buy a roller or build the frame, I mean really...How hard could it be?

Yes.....please resurrect this thread! And add in some inspiration too! I still have a chair chassis in my hay barn that's giving me the evils every day. I love my trials outfit but there is still a road one inside my psyche.

Hoosier Daddy said:
Going to try resurecting this thread, thought about starting my own and will go that route if needed but.....
I've had a vintage kneeler racing style rig for the street rolling around in my head.
http://blogs.motorcyclistonline.com/vintage-sidecar-roadracing-2485.html#axzz2gy2YoRBH
Either buy a roller or build the frame, I mean really...How hard could it be?

As you may remember - I've been collecting parts for a Max Deubel Homage - even located reasonably [ no - make that effing cheap ] priced fairing sets.

I am currently looking at a Monza chair / chassis which will have to do service on the BMW Fighter as I cannot consider yet another bike at the moment !

That will produce two problems - first it will bring back all the sidecar craziness I indulged in during the sixties - and second will probably mean that I have to spread my meagre funds thin again to buy bits for the Duebel deal.

HD - chassis a piece of piss for a competent welder - which regrettably I am not.

I went to the Vintage Moto GP here a few weeks ago.. I was looking at the all the rigs in the pits and managed to miss half of the sidecar races :/ 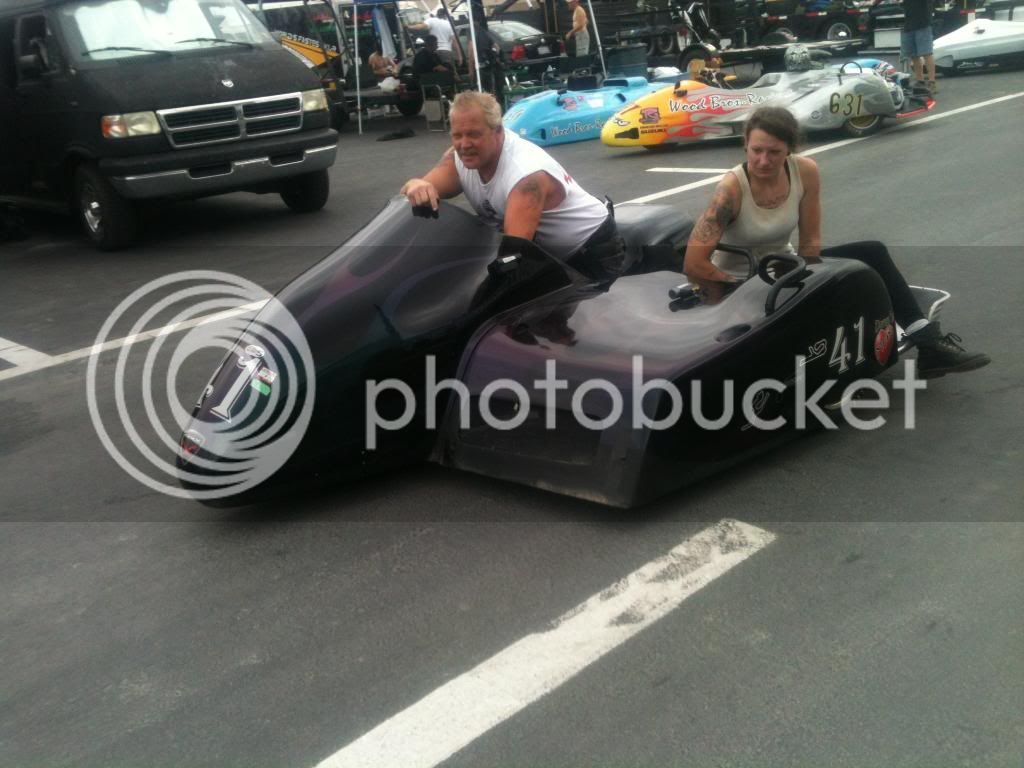 Can't wait to get my new axle and tires so I can start setting up my Dnepr on the XS650.

Found this... It's friggin HUGE... so if it loads click HERE for full size.

beachcomber said:
Erskine - you sold your Kay ????
Click to expand...

Hi TJ, Yep, I'm afraid I did. I picked up a good run of work and there was no way I was going to get it done in the short term. It was facing eviction from the hay barn so it was better to move it on than store it out in the elements.
I've kept the chair chassis so the project is postponed rather than abandoned.

DTT SUPPORTER
Hmmmmmmmmm - looks like I have to think again about a third wheel. After years of nagging background pain in my right knee [ football injury - those bastard nose tackles!] - my LEFT knee gave way suddenly at the weekend. OK now, but very tender but now limping on both legs !

I HAD hoped to get at least another 5 years of solo riding under my butt, but that is looking suspect.

So back to plan A - or was it B or C ?? Probably the Kay Fighter will become the tug .............. although I was briefly thinking about a true sixties outfit using the Vindicator [ TR1 ] and Steib, Monza, Grand Prix.

Due to the aforementioned thin funds, the Deubel sitter is still off in the distance - but the Kay is looking ever more likely to getting a chair attached.

Meteor chairs are expensive at the moment, as they have reached "Classic" status, so something based on the Velorex will probably be pressed into service.

Finally got mine on the road this week. What a blast it is to drive.. Well worth the wait and planning.

$80 for a Velorex, I'm lookin in all the wrong places/country.

JohnGoFast said:
Finally got mine on the road this week. What a blast it is to drive.. Well worth the wait and planning.

$80 for a Velorex, I'm lookin in all the wrong places/country.
Click to expand...

Velorex in the UK are generally cheap as they are percieved as being "Eastern European", which in the past has meant not high standard.

That really does not apply to the Velorex - in fact most former DDR / Eastern Bloc sidecars are excellent.

Most Velorex go for around £100 in complete but tatty condition

Here's the Watsonian - still £25 and NO bids ! The screen is not included, but I'd be ditching that anyway as I would convert the seating to be kneeler for the passenger - or with seat, depends how adventurous they are ! 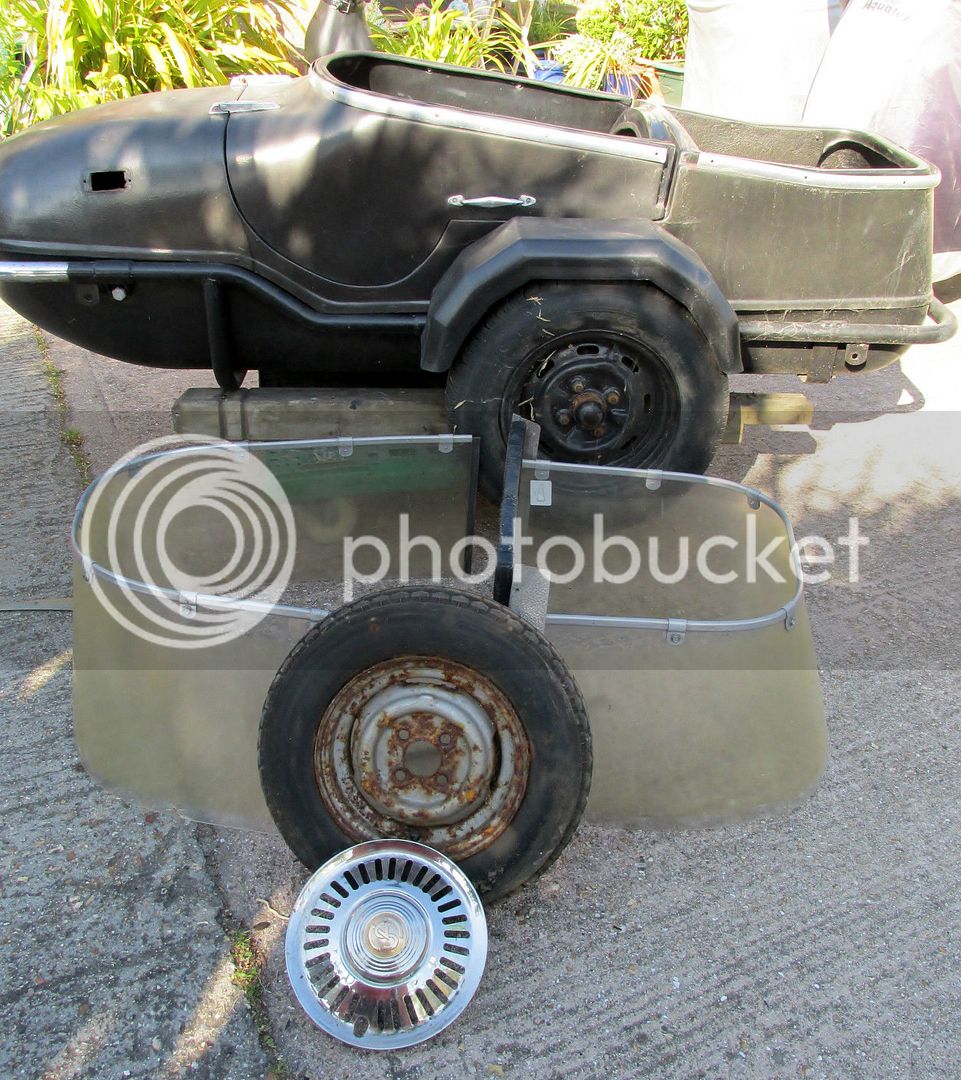