you're getting way too into this. it's much appreciated. i think the shape i like the least is the tank side contour (always thought it looked very old school sort of thing, maybe just too friendly), but it is the most fitting.

i went in for a bit of a play today on a public holiday, but ended up in a conceptual crisis.

i worked out the ie model airbox has the rear mounting in the same place as the carby airbox, just with shorter mounts so the cross bar was further back to clear the rh throttle body. so mounting it in the same place will just need a piece of angle tacked to the frame as a jig. simple. 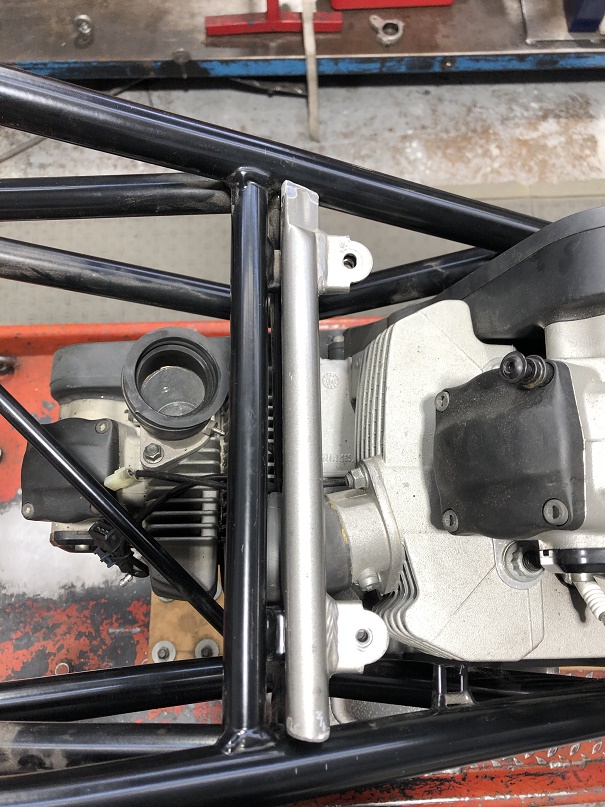 but then i got into a "why am i doing all this when i had enough stuff to build a carby model engine to just fit in anyway" and then i got a bit "it's an early m900 frame and they're getting pretty desirable now and i'm going to cut it up and do i really need that pressure" tempered with "the only m900 bit i have is the frame and it's already had the tail chopped off so what does it matter".

i've already welded a fairing mount to the front of the steering head, but that's only a cut off wheel away from being original. 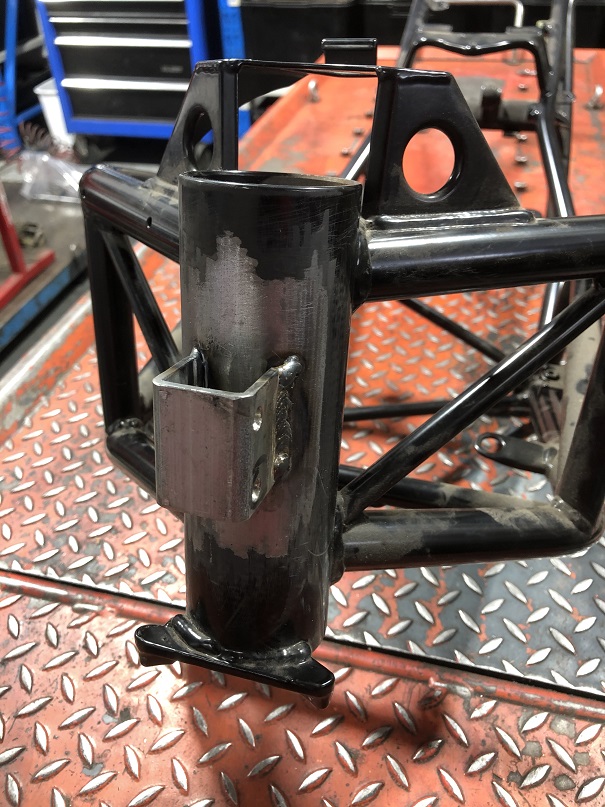 i was intending to cut the pillion grab handles off at the back and the fuel pump and air pod mounts, but i really hate the "can't go back" finality of it and now it's doing my head in.

the carb versus injected thing is because the 659 motor would no doubt work better with the shorter inlets of the injection system because they have big valves and short cams compared to the earlier long manifold carb motors. but then being a 659 it's probably not big enough to overpower the manifolds. 750 carb manifolds go straight on and i have some fcr39 to fit and i just need to sort the ignition then. but i really wanted to inject it because it would just be a nicer bike. but i found a carby wiring loom kicking around today, so i need to buy way less parts to carb it than i would need to buy to inject it. and it'll be a heap easier. no cutting/welding in a new frame cross brace either.

and then i was thinking i really didn't need the 659 engine as i have a 400 with all the bits to make it a 750 or 800 apart from a crank. the ported/big valve/big cam/high comp 750 engine was pretty good, and with 800 heads it'd be even better. but i remembered the reason i wanted a small engine for it in the first place was that it doesn't need an oil cooler. one less thing to annoy me.

moving on from that shit. i've decided to carb it, but might still fit the injected frame brace so i can inject it later if i so desire. or maybe not. who knows what'll happen between now and whenever that is. i think i'll make it complete before i do any paint / powder of the big bits, so i can test a few things.

anyway, if carbed i can play with this hall sensor ignition pick up kit, which i haven't tried before

and put a tps on the fcr so i can do 3d ignition mapping with the ignitech. haven't used this one before, i fitted a cosentino one to a customer's 900ss years aog , purchased during the very brief period they sold them. 3d ignition mapping is great. http://www.fastbikegear.co.nz/index.php?main_page=product_info&products_id=12093 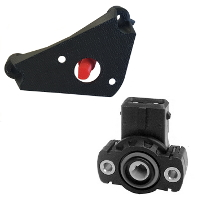 i was also going to dry clutch it using this cut out clutch cover i bought years ago from the local importers when i worked at the dealership, but it needs to be painted and the crank end seal needs to be replaced (fitted the "wrong" way round on earlier engines) and the oil feed passage to the crank is smaller in this cover than the original cover and what would be on a dry clutch 1098, etc. of all those issues it's the oil feed tube size that eats at me the most. 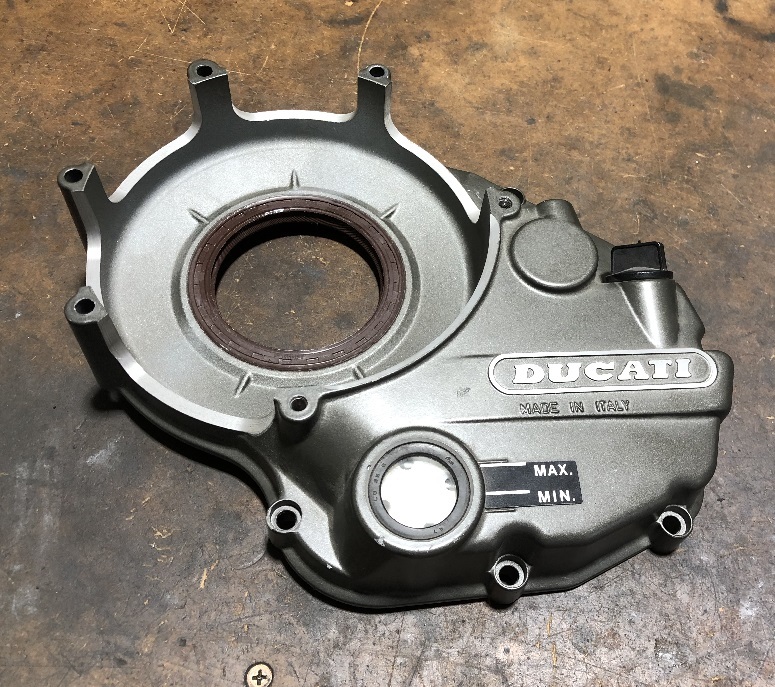 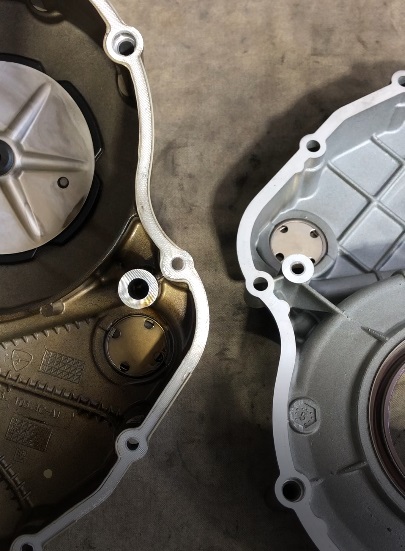 and dry clutching them brings the issue of sealing the pushrod at the centre of the input shaft. so i thought i'd make up some sort of cable set up that pulled the pressure plate from the right, instead of pushing from the left. but how to do that was perplexing me a bit until a post on a facebook tt page that referenced redfox grinta and one they made. and oh my wordy lordy me it's gorgeous. 650 euro worth of gorgeous, but that's not unexpected. 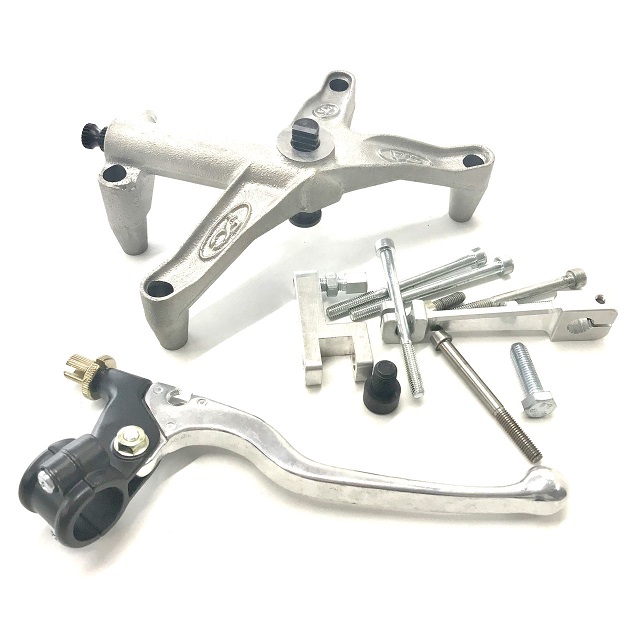 hoping i can run 3 springs in the clutch - half spring load on an 1198 set up should handle 660cc. i was going to paint and then machine an original pressure plate for something different, but i'll need to decide if i'm running 3 or 4 springs first so i can have the unused bosses machined off the pressure plate (and hub) before i paint it. and it'll need to be running for that to see if it slips at 3.
B

same engine, same front fairing, different rest. hadn't thought of going this way. but now i feel a bit like it's been done before. bugger. 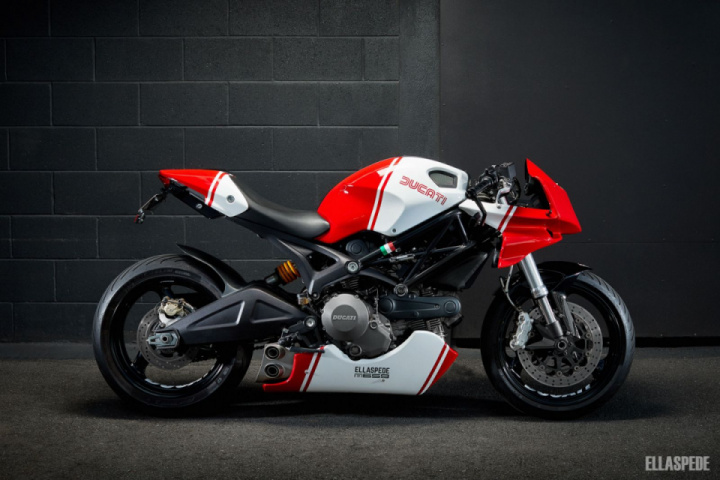 DTT BOTM WINNER
Interesting color scheme. by slanting the strip slightly forward it creates the image that the bike is leaping forward too. It echos to a degree the frame slope and swingarm and shock. Very clever.

You could certainly play with versions of that design element, but as you said, it's already been done so that rules it out. Admittedly it's hard to make teh TT F1/F2 color scheme work because the tanks are such different shapes. You could try a broad stripe fom low front to hight at teh rear to give the visual impression of speed, or keep playing with the F1/F2 idea and be different.

BTW, that clutch lift kit is super cool. That's a lot of VB coupons, but cool.
B

i don't do vb or any of that stuff, so i have good coupon credit.

got further with the paint 3d, this is what i was initially envisaging i guess. the top of the tank has a heavy styling line / boss around the cap and forward, so i could come back from the headlight up and over making that red to. but at some point it'd be too much red. 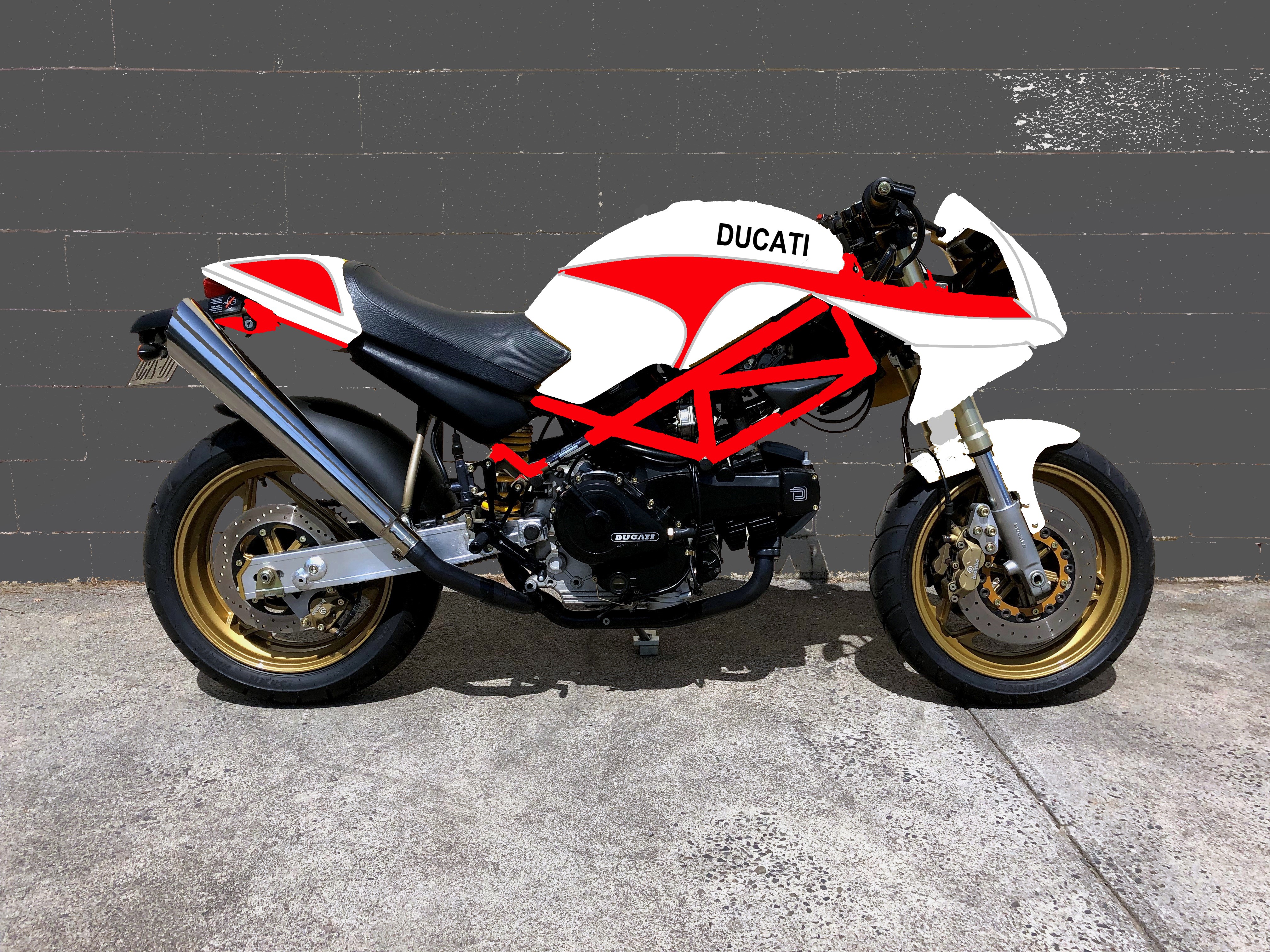 DTT BOTM WINNER
Stop. That will work. And it's only paint, so you can always change again for next year. I like back pinstripe as teh liner but that's very Yamaha TZ sort of colors, so I'd use red liner or even gold 6mm stripe.
B

these popped up on a facebook tt2 page. white/red and gold wheels. the ducati decals with elephant are kina taking my fancy. 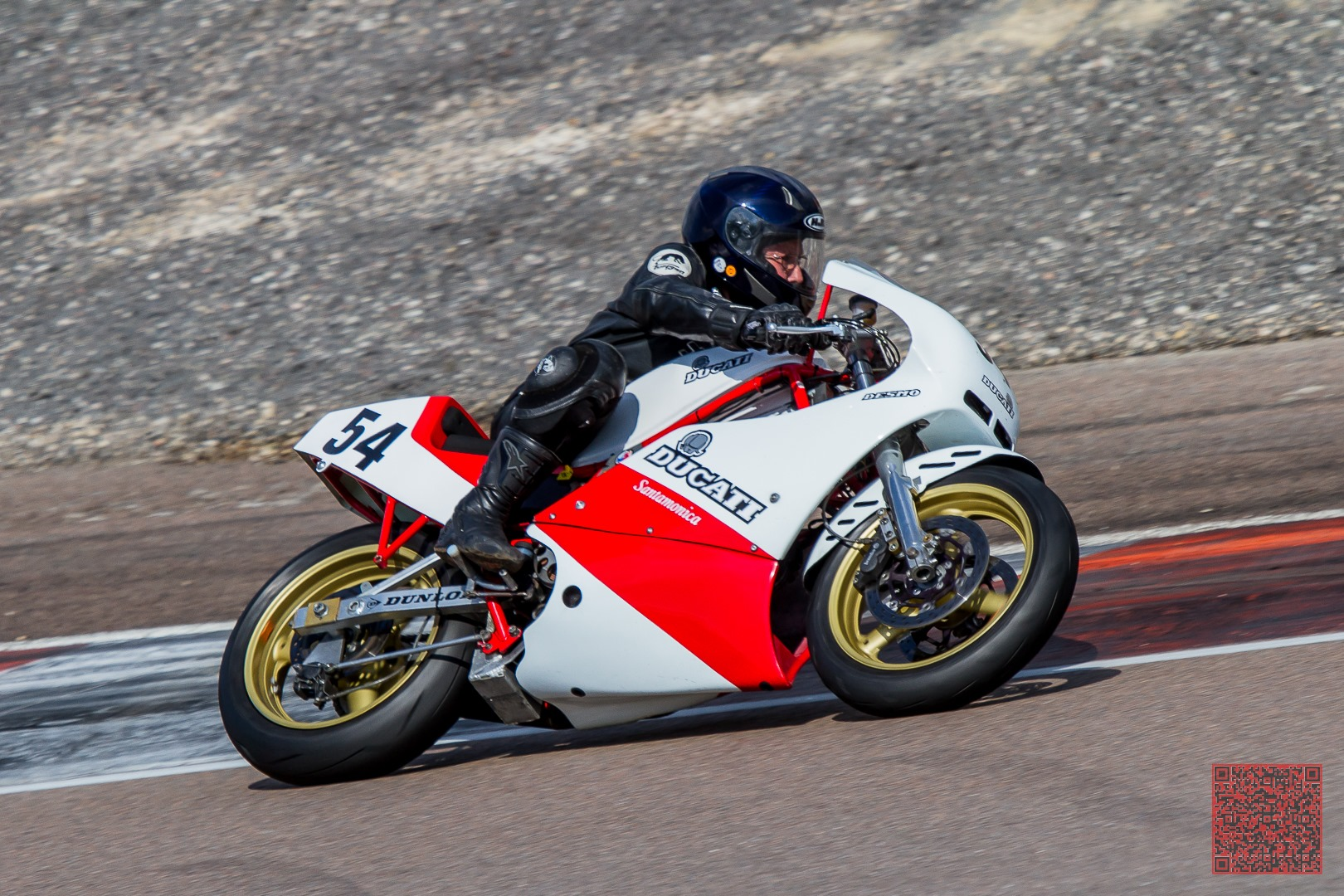 this would be the "too much red" 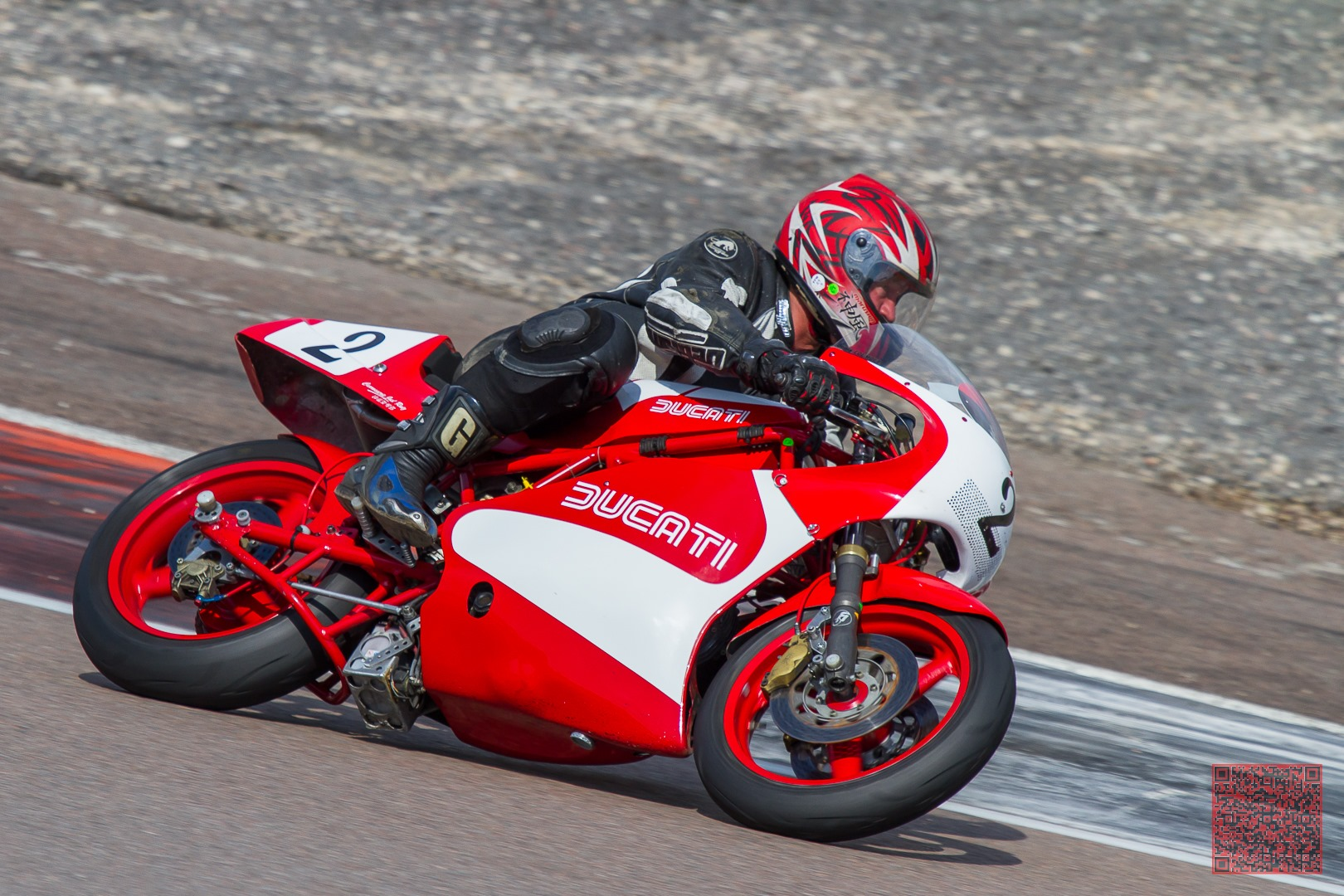 DTT BOTM WINNER
Agree. Too much red. I see that they both have the battery box mounted under the swingarm pivot. You can presumably keep all the electrics where they should be.

Small front disks on both bikes though.
B

look like oem size to me. i think they were the deep 280mm cast iron floaters. they've both got 17" wheels, the santamonica would have had two piece 16" originally.
B

went through my stuff today looking for what i don't have to make this collection of parts a bike. it's funny when you look up the oem new price for bits, then find them on ebay for double. happens a lot with ducati stuff.

i did freak myself out at one point when i looked at it after i'd fitted the suspension rocker. the angle of the shock and hoop were much more off vertical than i expected, because of the way it sits with the engine mounted on the wheelie stand. the front is a low lower than it should be, and from side on it looked like they'd moved the swingarm pivot back on this engine compared to the earlier ones. i had to measure the output shaft to swingarm pivot dimension to settle myself down. then used some blocks of wood to prop the front up - the manual says the front mount is 32mm higher than the rear.

i think i'll assemble it to complete as is, then pull it apart again to get everything painted, etc. need a shorter hose on the 888 shock remote res too. there's a couple of tabs under the cross brace the rocker is mounted on that had been there since the start of monster production, and my 2001 m400 frame has them too. only 2 or 3 year model m900s - 98, 99, 00 - in the first frame have ever used a remote res shock. seems wacky the way they kept fitting pointless brackets sometimes. good for me, although the original steel res mount is nla allegedly. 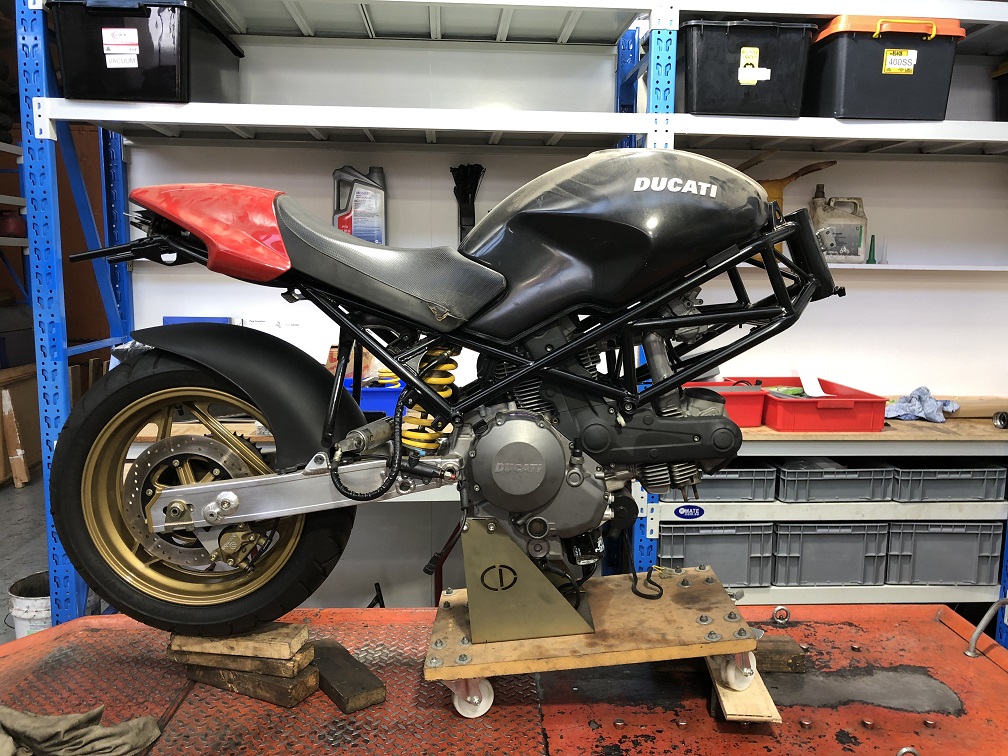 so i bought the clutch thing. now waiting on shipping from belgium.
B

clutch thiingy arrived, and late model primary drive cover to cut out. i sold the green one to stop myself trying to sue it. now trying to work out what colour to make it all. the clutch mechanism is raw, but it's a bit shiny like some photos i think irk has posted previously of vapour blasted stuff. not sure what to paint the primary cover. the 696 engine has a charcoal sort of colour cover originally. this one is the faux magnesium colour. the old tt2 bikes would have had a raw aluminium cover as cast, whereas the road bikes of the day were polished. so maybe i get the primary drive and alternator cover vapour blasted and leave it at that. whatever i do, i need to choose this before getting the cover machined. ducati always paint things then machine them, so the machined edges are raw finish. i have seen some photos of these in a flat sort of dark grey industrial look, but not sure what i want to go with now. 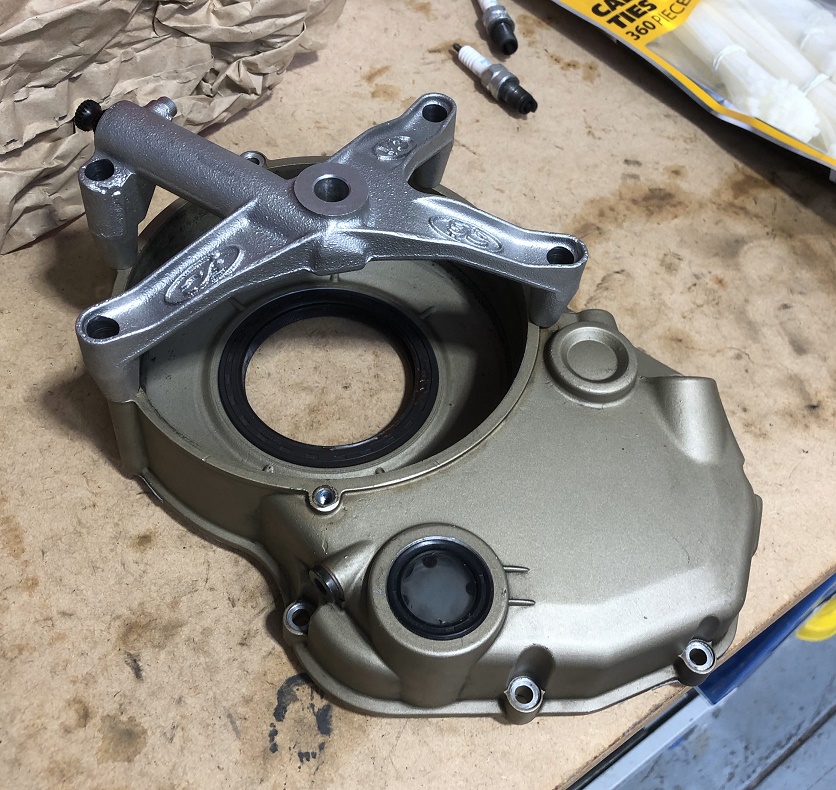 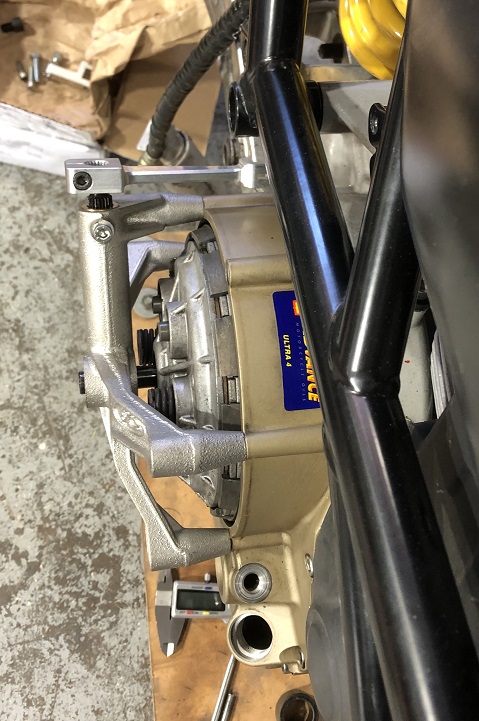 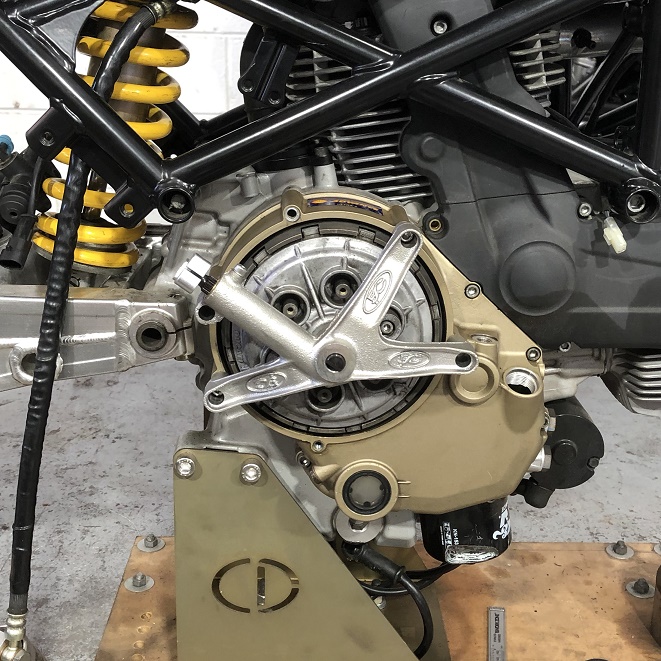 so i have to find someone with a mill to cut the cover out and make a cable mount and cable and so much other stuff.

with only two springs in there i can move i the lever with my hand. so hopefully 3 will be pretty soft at the lever.
B

i ordered a heap of genuine parts to get me moving. the tail panel and undertray and lots of other little shit to make it come together.

need to sort what i'm doing with the back of the frame and if i'm going to cut off / drill out the aluminium tubes off that have been epoxied into the frame rails there. then i suppose it's just wiring it up - the loom can be cut back from the front as all the dash and light wiring makes it up under the front of the tank and once it's a complete thing, strip it down and make it pretty.
You must log in or register to reply here.
Share:
Facebook Twitter Reddit Pinterest Tumblr WhatsApp Email Share Link