DTT BOTM WINNER
OK, todays progress, or lack of.. I needed to move the rear sets before doing anymore work on the exhaust. But I didn't know just where they should end up. So todays task was to make a couple templates in some scrap alloy, with a few different mounting holes, then I could try moving around the pegs until I was happy, and hopefully let me finally position the exhaust the way I want. This will mean making a new shift rod and modifying the downpipes yet again. Its not a problem, as I consider the bikes I build to be prototypes of themselves.. they always have to change and evolve.

Over at Jeff's workshop.. cut out two alloy 3mm plates from an old road sign, mark out where the holes should be.. 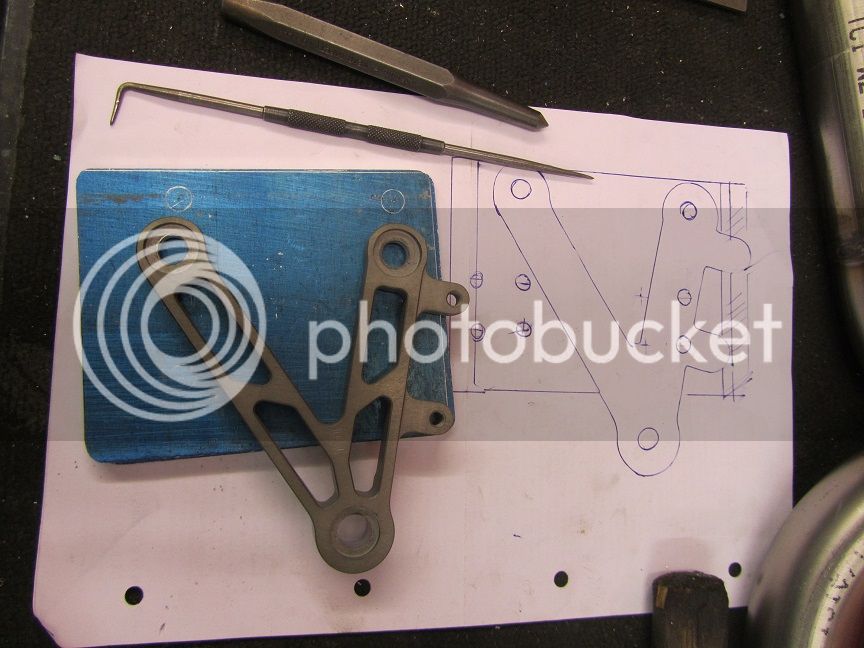 Drill them clamped together, check and time for a teabreak.. 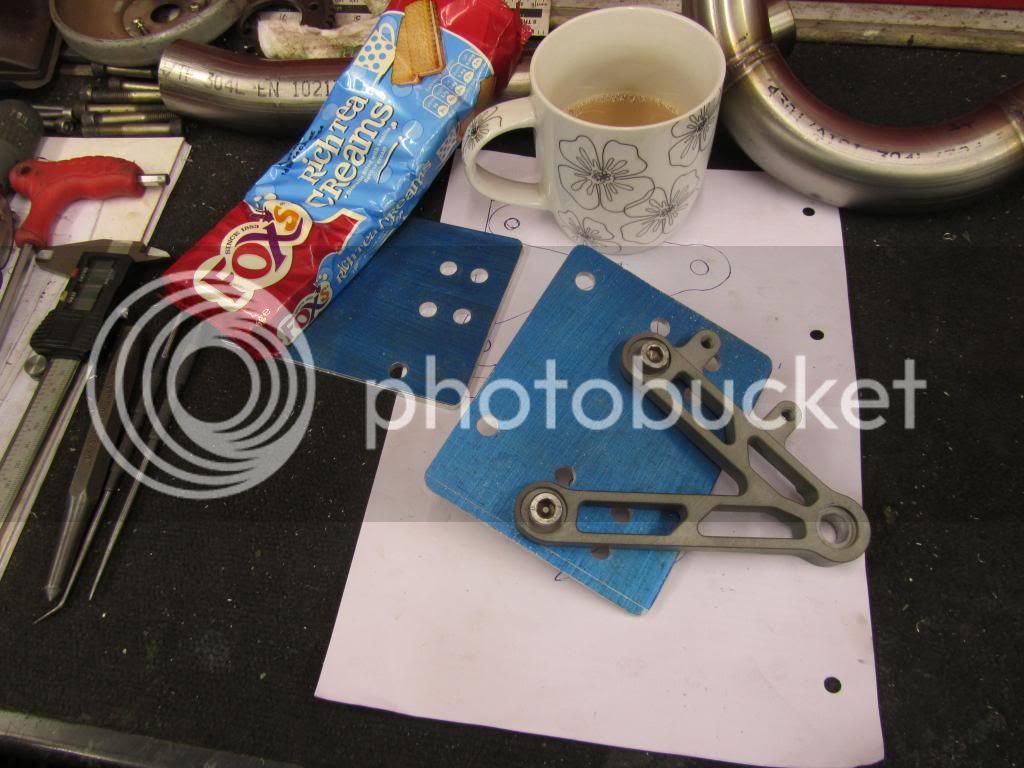 Back home, the templates fit, though I needed spacers. I was considering making new brackets for the LSL pegs, but now I'll just make a pair of simple plates to move them forward. They'll be made a lot neater then these templates, from 12 to 15mm alloy, so the frame mounting bolts can be countersunk flush with the plate (so wont need the spacers). The alloy plate will be threaded to take the bolts holding the rear sets. This position seems to work ok, it should give me enough clearance to fit the mega the way I want.. 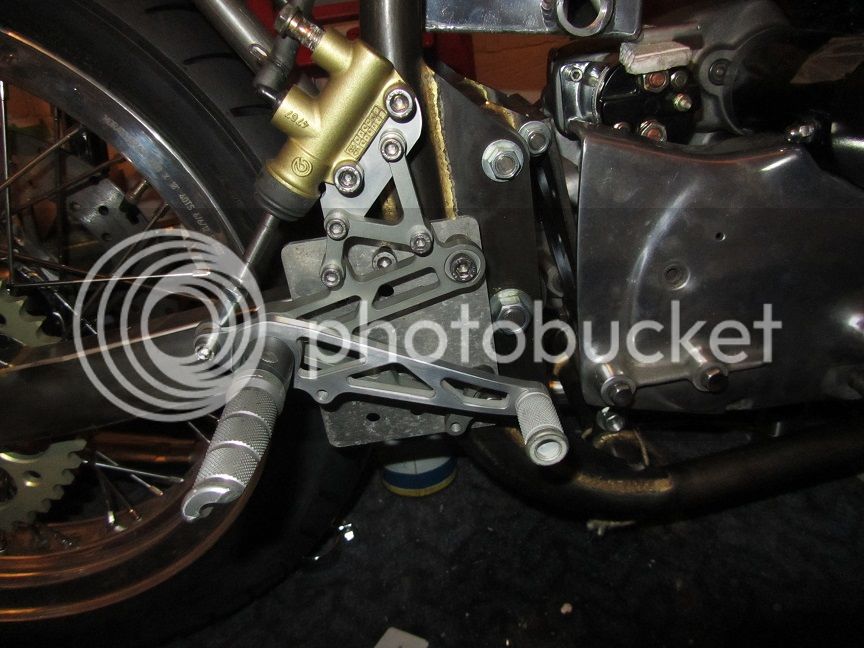 Still got to get the downpipes right, but feels like I'm on the right track now. This is the tricky bit, to get the joint right as the downpipe comes up and out from the underside of the engine. Have to get the correct angle and position of the mega and give sufficient ground clearance.. 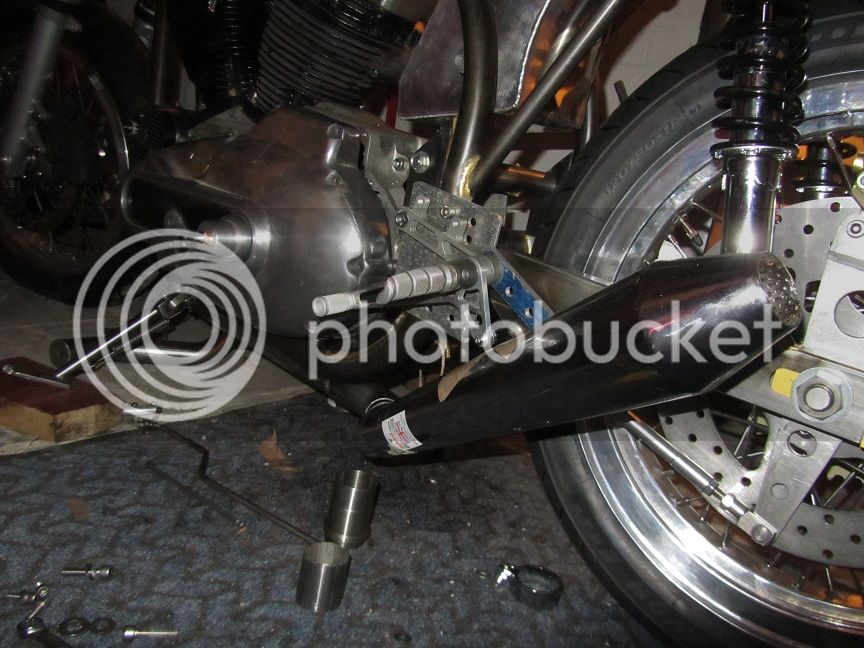 While at the workshop, we extended one of the downtubes by inserting a two inch piece, just tack welded for now.. was going ok till the very last weld, when we blew a hole through the pipe. I'll cut out 5mm from this section and have it welded up later.. 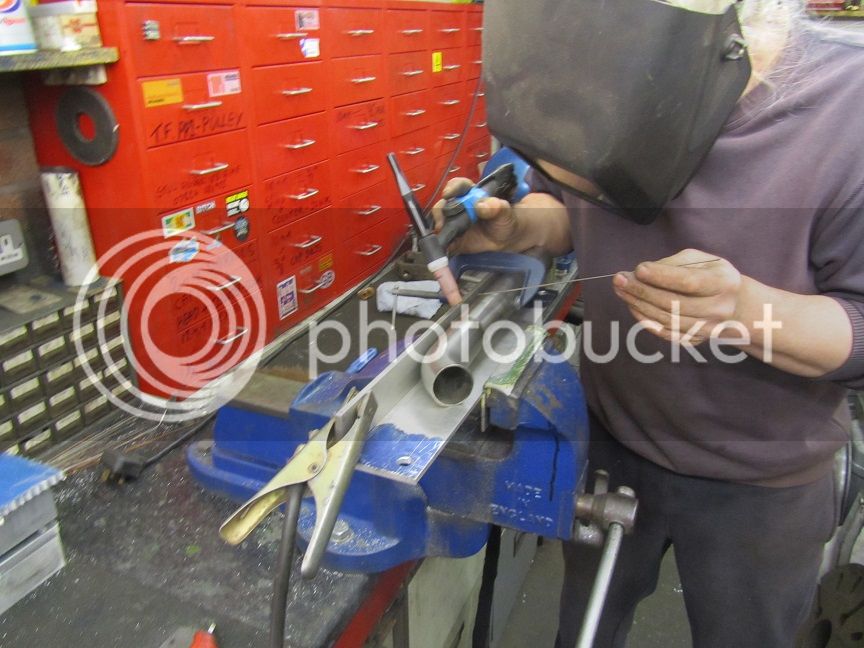 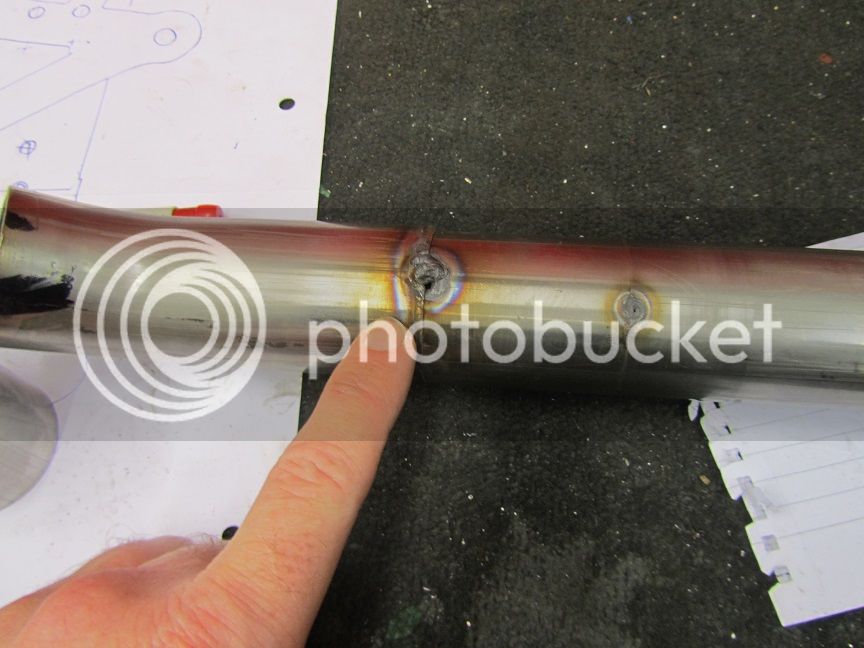 DTT BOTM WINNER
Ahh, that's a pisser. Are you going to be coating the pipes or leaving them raw?

Tig welding without back-purging the pipe?

Yes, shouldn't really, but thought we'd get away with it for just a few spot welds, so I could go home and check the fit on the bike, before having the joints fully welded. Almost got away with it, only the last spot weld went bad. Its fixed now, so no problem.

Rich Ard said:
Ahh, that's a pisser. Are you going to be coating the pipes or leaving them raw?
Click to expand...

I'd prefer to leave them just linished, for an industrial look, but I'll probably have to polish them to match the chrome on the megas. I could get everything ceramic coated including the megas, but that would be a pity as the chrome is good quality.

god this thread is makin me moist. I've loving all the work you're doing. Great job. I just started an ironhead project myself, can't wait to start design and fabrication after i get it runnin.

DTT BOTM WINNER
Thanks for the comments, I sometimes think I go into too much detail, particularly for the fairly simple stuff I do. Today, Geoff the welder was working on a weekend, so I popped over where he welded the last piece on the RHS pipe. I've learnt my lesson in not trying to do both sides at the same time. I've wasted hours trying to get both megas at the same angle and height, and changing both sides at the same time. With one side done (almost!) and fixed, I've now finally managed to match the LHS, which I'll get welded on Monday afternoon. The hooks to hold the exhaust springs have also been welded onto the exhaust. I was about to drill the holes in the cylinder head fins to take the other end of the springs, when my drill died..

Here's an action pic of Geoff welding my exhaust (surprised the camera could handle the intense light, I certainly didn't risk it). I asked about his old work bench, he did his apprenticeship on it, in a local brewery. When it closed, it came with him. BTW that old brewery had been there since the 1740s. 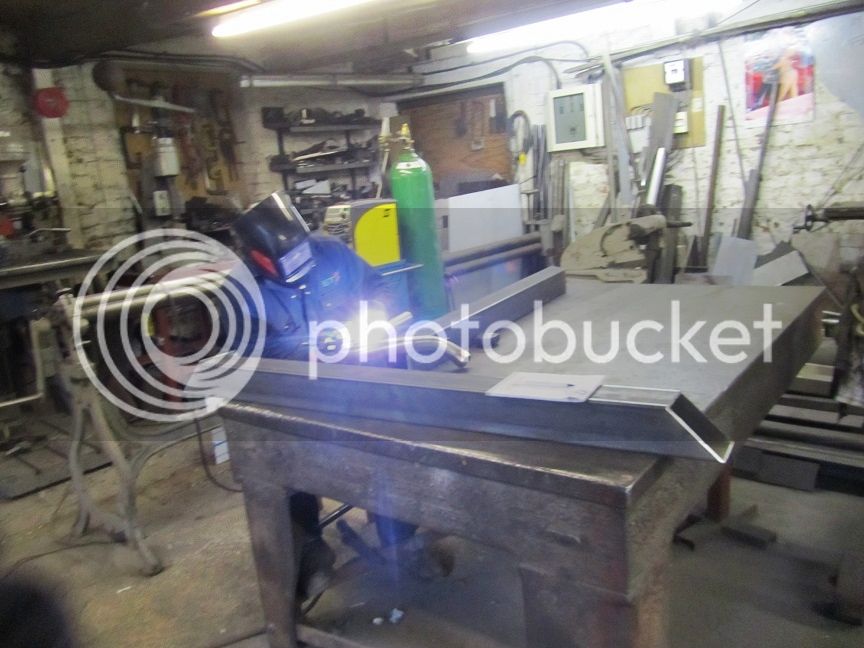 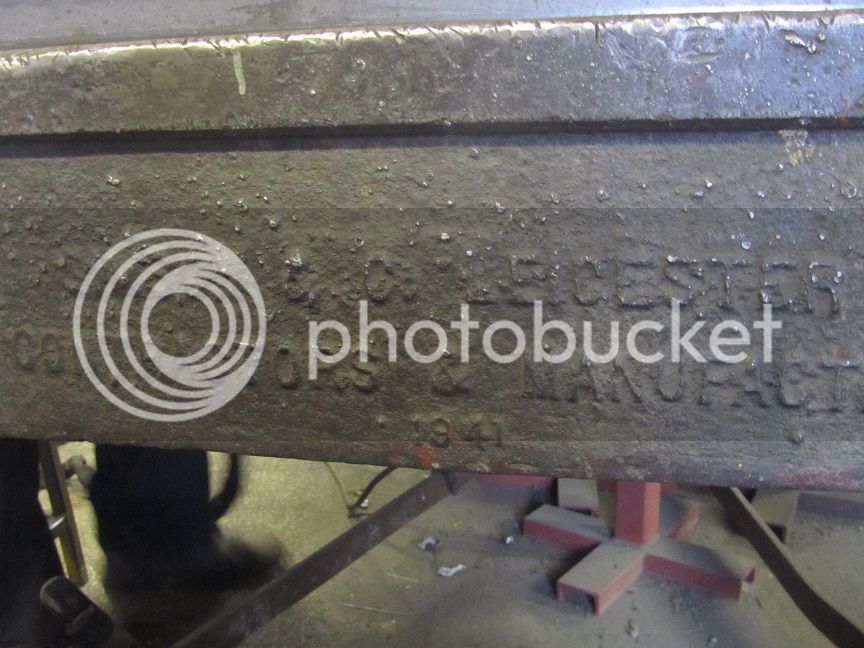 Been playing with the edit function in Photobucket..the new downpipes may not look much different, but every joint has been changed and rewelded.. 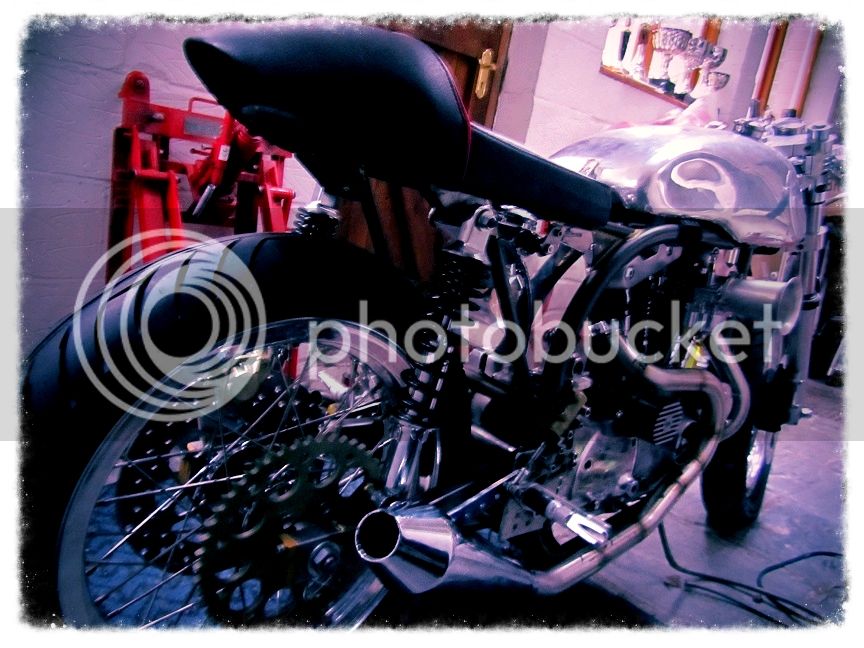 My clip ons are 7/8 inch, in case I use HD std 1 inch hand controls (I had a set of German made RST controls left over from an old project), Geoff kindly gave me an off cut of 16 gauge 1 inch tubing, if I cut this in half lengthways, it should make the shims I need.. saves a few pounds on buying them.. 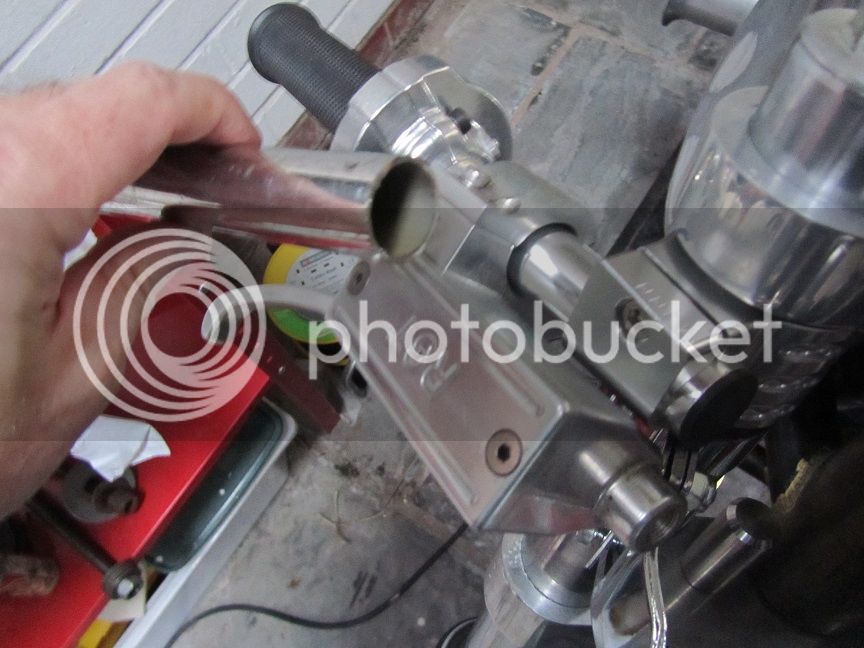 DTT BOTM WINNER
That work bench is awesome, oh and the bike's not too bad either

Extaordinary build, Harly in a Norton, pretty much off the chart cool. I hope you don't take the attitudes of some of the posters to heart, just raised by wolves.
C

Thanks for sharing this build!
I've learned alot so far

DTT BOTM WINNER
The exhaust is finally done, still need to decide whether to polish the downpipes, but that can wait. Next job will be to make the real rear set mounts and exhaust hangers, in place of the temporary ones I've used so far. Also been thinking about where the battery is going to live. Ideally it should go under the seat hump, but there isn't a lot of room under there, so the back up plan was to mount it under the swing arm, behind the gearbox, as I'd seen a few Sportsters with the battery in that location, so should be enough room. My drop seat Harley has its battery under the swing arm (actually it sits in the swing arm), which has always been a PITA, as to access it, I need to remove the rear wheel, not ideal

I'd always intended to use a Lithium Iron battery, and for the Ironhead, I'd need the equivalent of a 20AH Yuasa lead acid battery. I could get a Shorai at a good price, but looking at it specs, it didn't look that much smaller than the Yuasa, though it is much lighter. With one of my exhaust downpipes running under the engine, I wasn't sure if there was enough room behind the gearbox to fit the Shorai, let alone a Yuasa.

I made cardboard copies of the three options, Yuasa, Shorai and Ballistic. Sure enough the Yuasa wouldn't fit, while the Shorai only just squeezed under the swing arm, a bit too close to the exhaust and rear tyre for comfort. The Ballistic was so much smaller it would even fit under the seat, if it was recessed a little into the tray I'd made earlier. So that's what I'll do. The Ballistic isn't cheap, twice the price of a Yuasa, and I've read mixed reviews of Lithium batteries on bikes, but going to give it a try..

DTT BOTM WINNER
Got myself a new hand drill, so the exhaust springs are on now. Ordered a Ballistic Lithium battery, and dropped the stainless seat under tray off at Geoff the welders, where he'll add a 25mm deep pocket for the battery. Fingers crossed that'll allow enough room for the battery to live under the seat hump. Also ordered a universal throttle cable kit from Venhill, to connect the Tomaselli throttle with the S&S Super E carb. The other Jeff is making the new rear set mounts from my design, it'll mean the original 'V' shaped mounts will be replaced completely, which will look better than the original plan.

DTT BOTM WINNER
While looking at Maxton's site (suspension gurus near me), I found this great little video.. the bike head for a little resort on the coast, same place place as my frame was made..enjoy..

Is that the trident that was featured in classic bike magazine a while back with that insane upswept exhaust?
Have such a terrible connection to the web,so i can`t load that vid!

Floegstad said:
Is that the trident that was featured in classic bike magazine a while back with that insane upswept exhaust?
Have such a terrible connection to the web,so i can`t load that vid!
Click to expand...

Didn't see the magazine bike, but the one in the vid does have a 3-1 steeply upswept exhaust, similar to the other two bikes.

Yes it was,beautyful one that is.

DTT BOTM WINNER
Found out the bikes in the film were built by a workshop who also worked on my Ironhead before I got it (raked the frame, made the yokes and extended the forks).. small world. More info here... http://www.malarkeyengineering.co.uk/21stchtml.html