Awesome, I want a harley powered cafe before I die. 8)

DesertKZ said:
Awesome, I want a harley powered cafe before I die. 8)
Click to expand...

I weighed mine today on an accurate set of racecar scales. How are these for some numbers:
111lbs front, 156lbs. rear, 64lbs on the kickstand for a total of 331lbs. 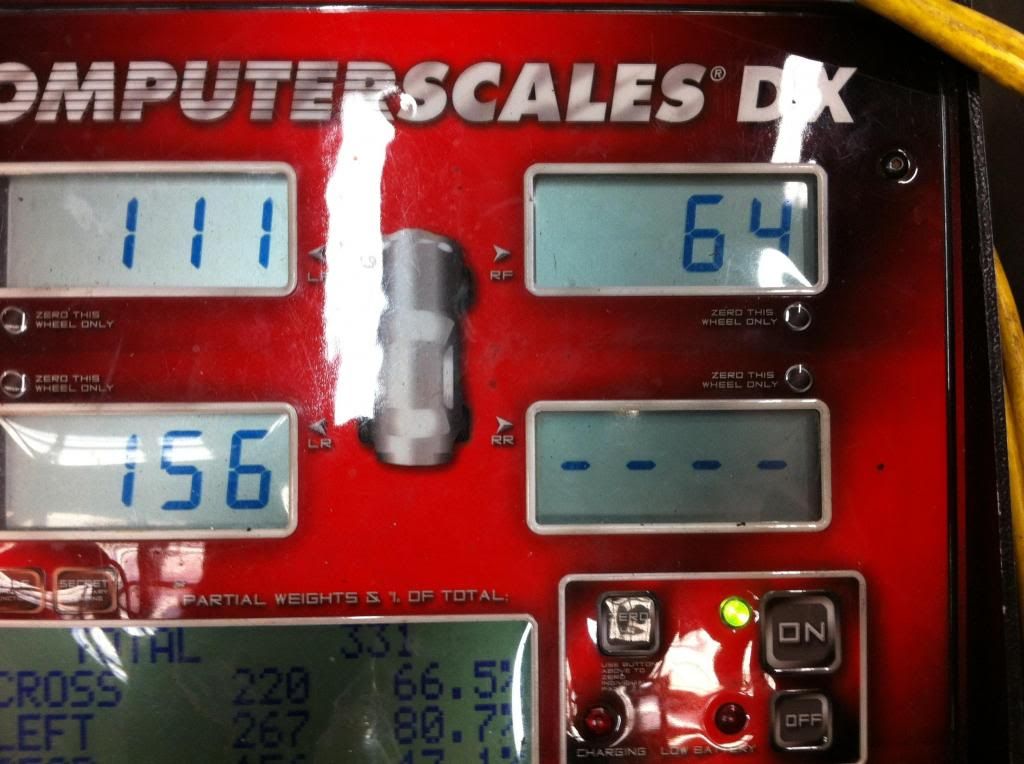 DTT BOTM WINNER
Impressive, was that with all fluids and running? Where has it lost the weight?

That is without fuel/oi so with 5 gallons and 3 quarts of oil add another 36lbs and she sits near my goal weight of 360lbs wet. Lighter new tires without the old tubes, different tank, metric instead of heavy Harley handlebar controls. It all adds up a bit at a time. I can't help but pat myself on the back for achieving an almost impossible weight for a street Sportster that once weighed in the neighborhood of 540lbs.

DTT BOTM WINNER
330 lbs with that kind of torque will be a blast to ride!

canyoncarver said:
330 lbs with that kind of torque will be a blast to ride!
Click to expand...

The new rear set brackets are done (still need to make the brackets for the silencers), and polish them later.. 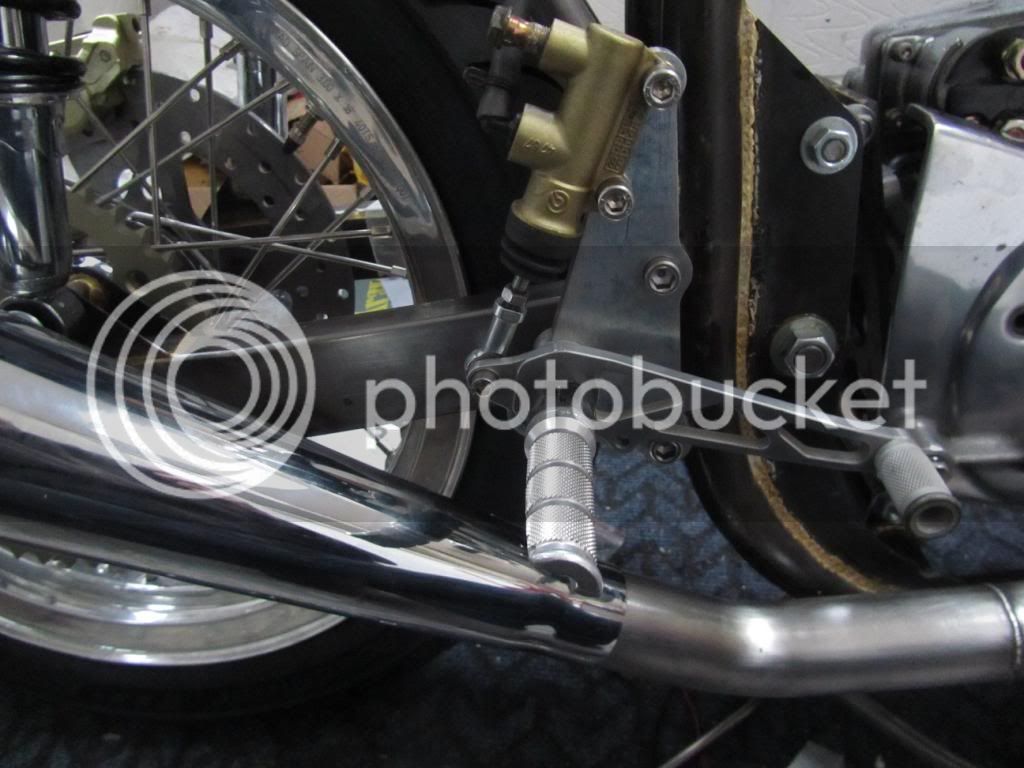 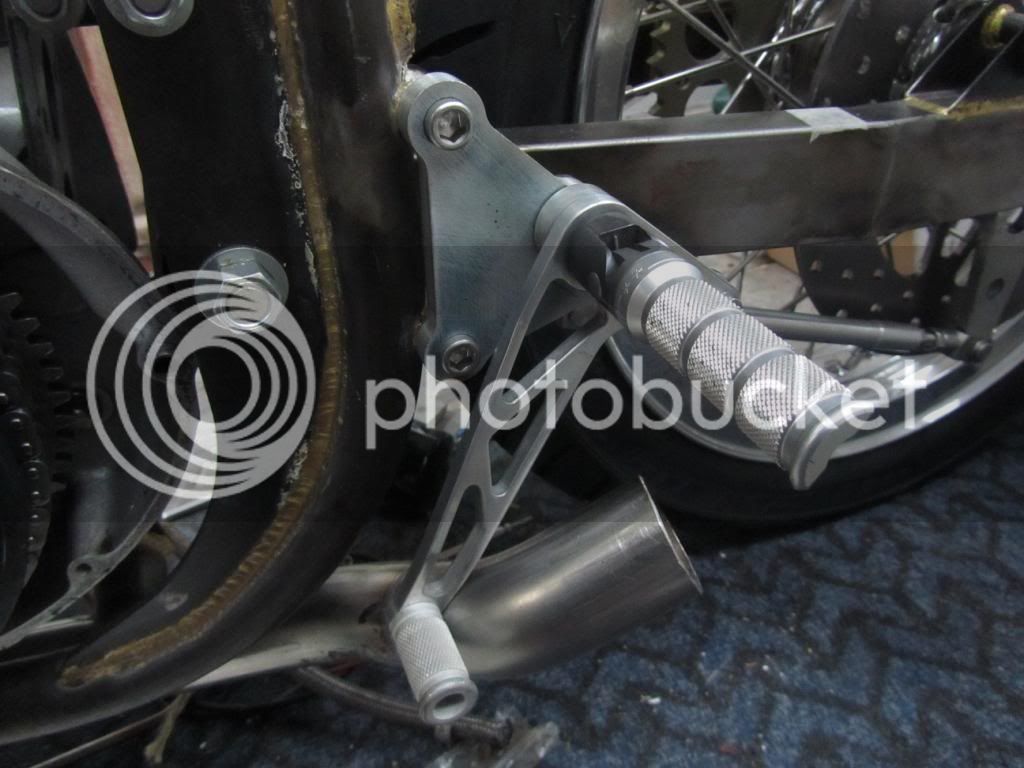 Machined a hex on the clutch slave cylinder, to fit a 30mm socket, as otherwise it needed a strap wrench to tighten it.. looks more interesting too 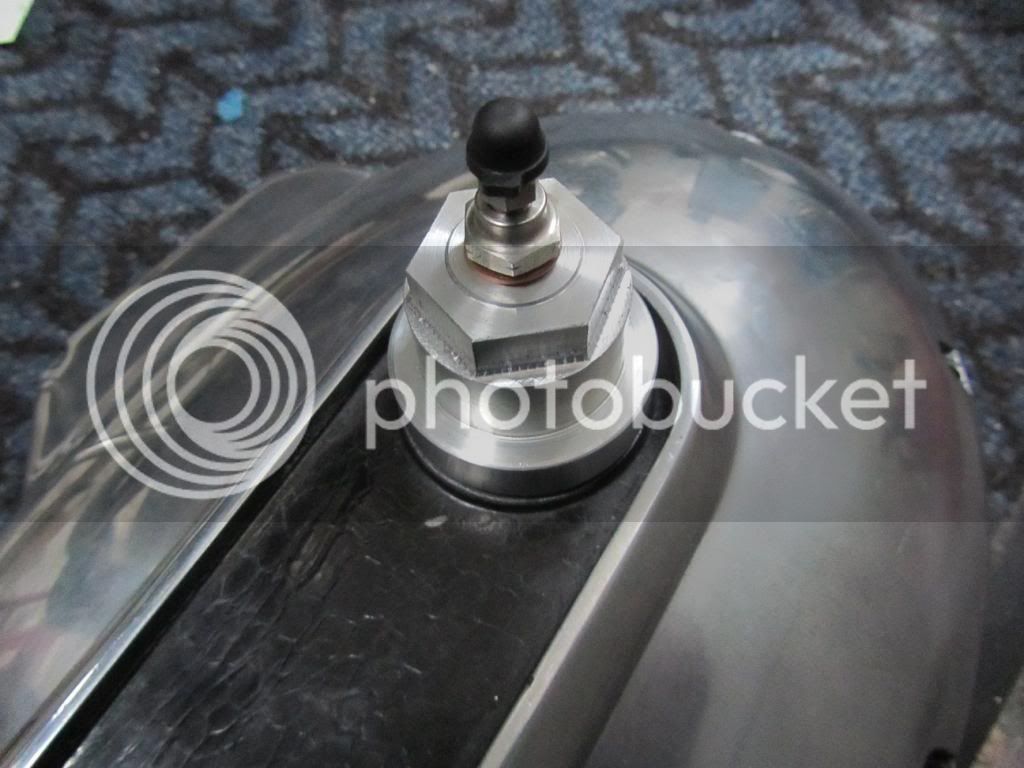 Starter button is fitted in the top motor mount.. 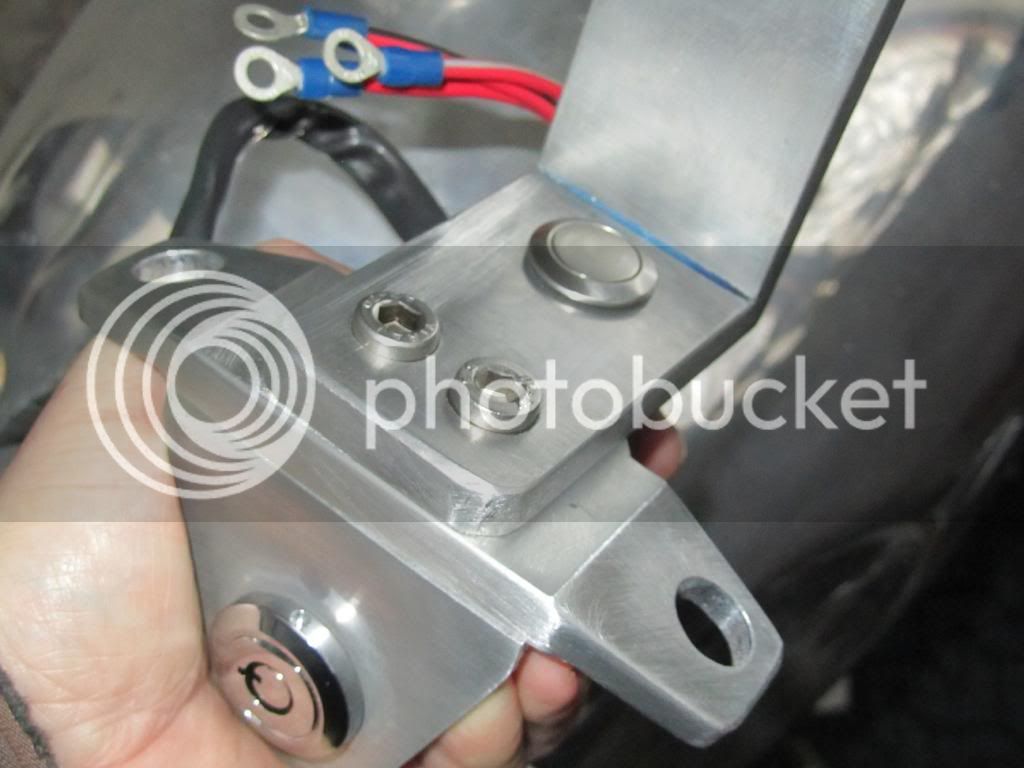 I've had this old oil filter mount for ages, it came off my old 1970 Ironhead, I wasn't going to use it, as I thought getting a suitable oil filter would be difficult and expensive, as its different from modern Harleys. But it turns out its the same filter as used on many modern Ducatis, my local bike shop had them in stock. I just need to find out the centre to centre distance between the lower bolts rear engine bolts, I cant measure it with a vern without taking the bike to bits. The bracket is so thick so I can use countersunk bolts to fasten the filter to the bracket.. 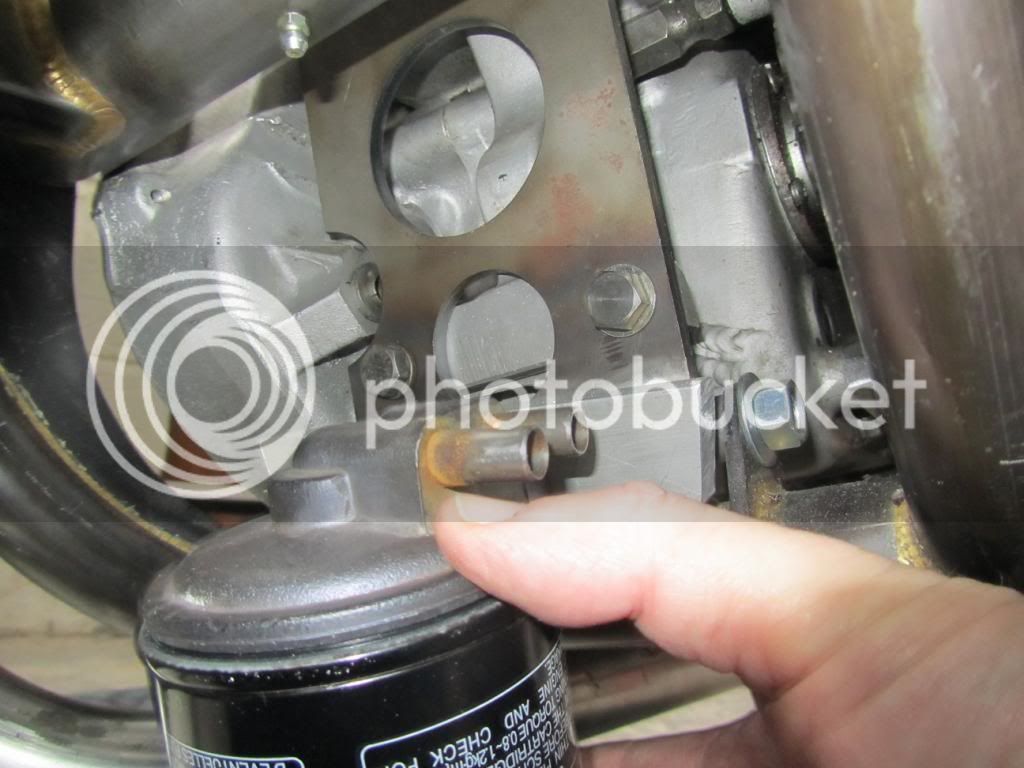 Great project. Inspiring to see how make everything!

DTT BOTM WINNER
I can only make pretty simple stuff at home, but today I wanted to make a front 'buckle' to fasten the front of the tank strap to the frame. I'd seen one for sale, which was very nice, but expensive.. 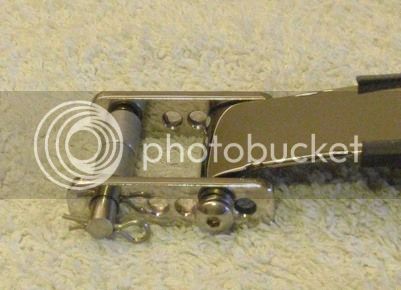 So with an offcut of alloy plate, I made this, with just a hacksaw, a drill and a file. It needs longer socket heads to take the 1 1/2 inch tank strap, then I'll make the spacers to keep it centred on the frame tab, and maybe do a little more work to the side plates. Cost only time. Also ordered a 3 1/2 inch diameter by 3inch deep billet of alloy today to make a new air filter/ velocity stack.

Your build continues to be cryogenically cool.

DTT BOTM WINNER
Since its xmas, bought a present for the bike... some debate about how useful it'll be on an old Harley, which run with very low oil pressure when hot. But its reassuring to know oil is getting to the top end, and it'll be getting an oil pressure light too.. 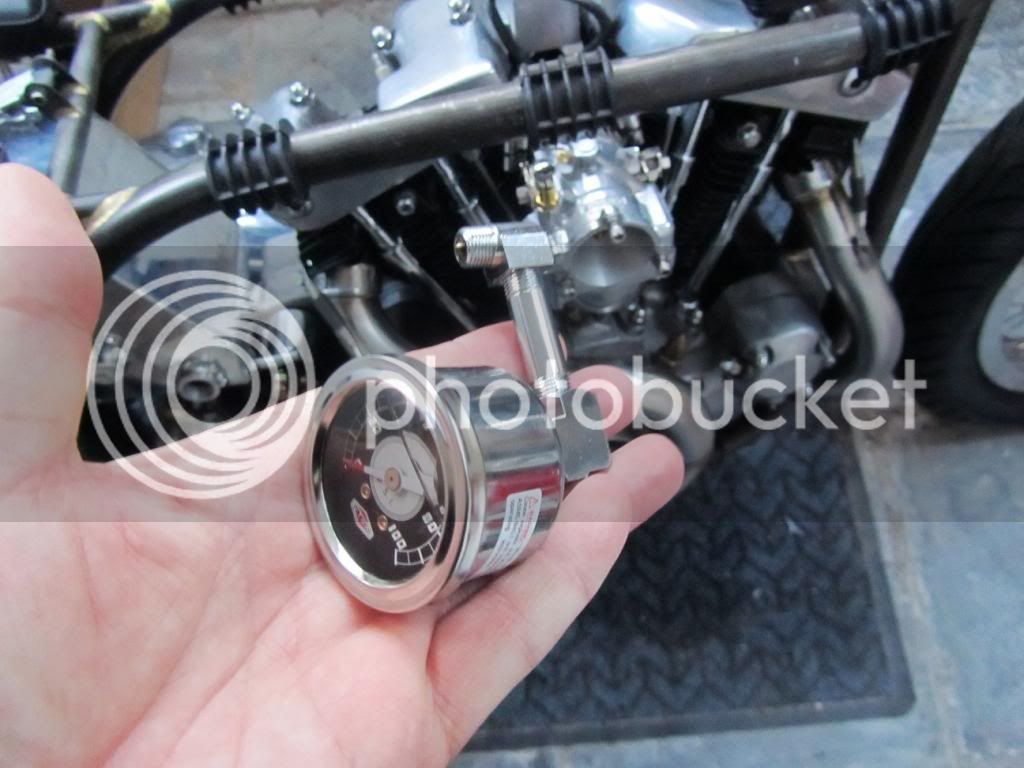 Not the most obvious location, but really only need to see it on start up.. 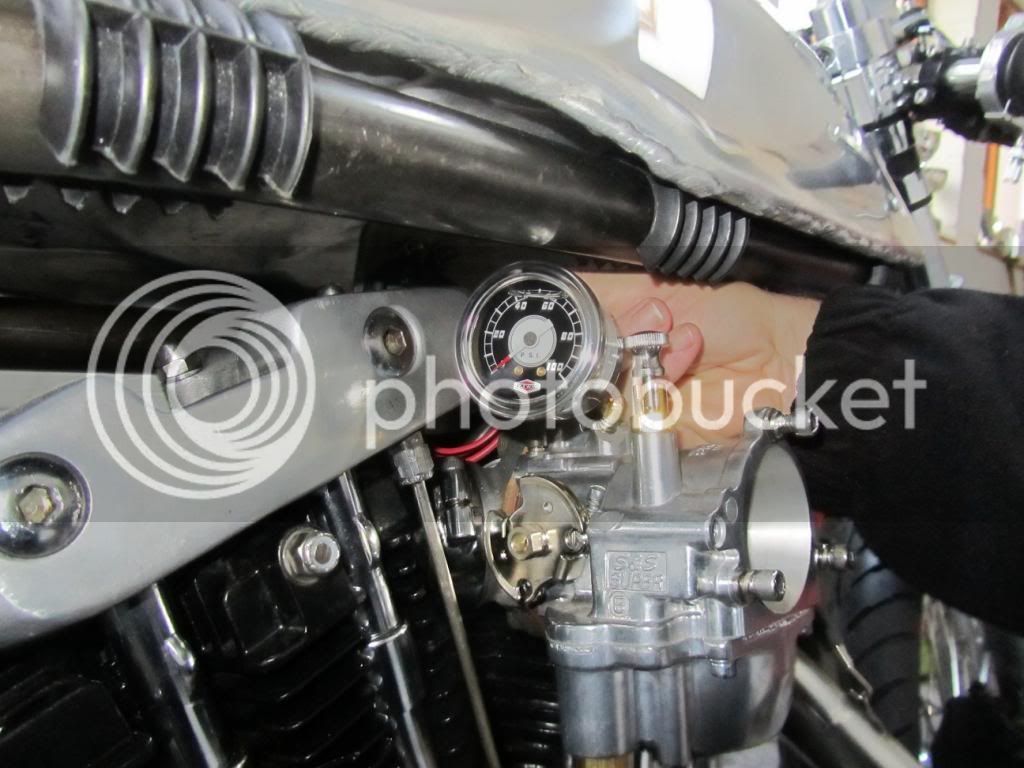 Should have the last few machining jobs done by early Jan, then the bike will be dismantled, followed by a little welding on the fame, then powder coat, then the final build can begin. There are still problems to sort out.. will the hydraulic clutch conversion work? and how to align the chain sprockets, as they are about 8mm out. The easy way would be to move the rear wheel over to the left by 8mm, but that's a last resort.

Or the front sprocket could be moved out 8mm, that would be best, except there isn't enough 'spare' thread on the output shaft, to put a spacer behind the sprocket. The usual solution is to fit an offset front sprocket, which was my first thought. But it seems they aren't available for Ironheads (at least none I can find), as they are for later Evo Harleys. One more option.. weld two sprockets together, with the inner having its teeth machined off, and the outer having its centre removed.

How you are going to make the tank's strap? will it be alloy? leather? I need to make one also. I want it to be alloy but I'm not sure which kind.

DTT BOTM WINNER
I have one already from Unity Equipe, its polished stainless. It came with a little hook and two pop rivets, you need to rivet the hook unto the strap at the right spot, so the hook links unto the rear buckle with the correct tension. Also got a strip of matching foam to protect the tank. Seems odd, but Unity don't sell a front 'buckle' for their straps, so I'm making one instead. Depends on the look your going for, but I feel a leather strap would work well, maybe use an old belt, or get one made to size, it shouldn't cost much.

You need to replace the 100psi gauge with one that only reads to 15-30. The factory manual says "Under normal riding conditions oil pressure will vary from 10-14lbs and at idle 3-7lbs." I doubt a 100psi gauge is very accurate at 3-14psi. I've determined with such low pressure and such a variance that the idiot light is more important just to know when you no longer have any. I understand that because of the way the Harley lubes things that, unlike modern bikes, you go a few further miles with no oil pressure before causing major damage. Are you mounting it in the allen set screw on the front of the rocker box?
I think this one would be ideal for us. It may get pegged on the top now or then but I'd rather see pegged at 15 instead of reading zero:

They do make offset trans shaft sprockets. I recently ordered a non offset sprocket and ended up getting sent an offset that the seller didn't know was offset. Let me find it and I'll tell you the offset and tooth count on it. If it will work for you you can have it for the cost of shipping. 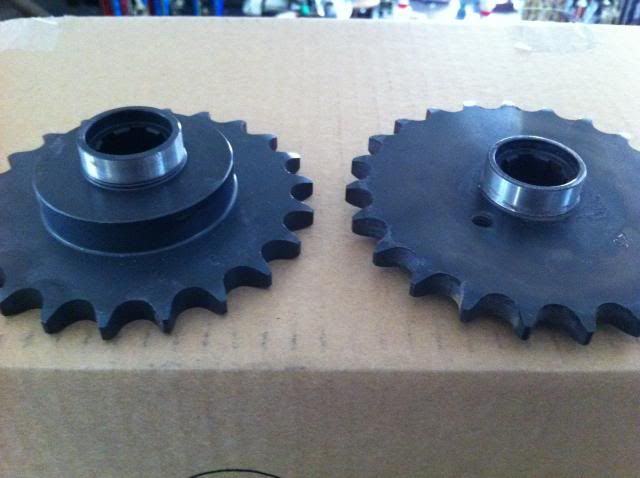 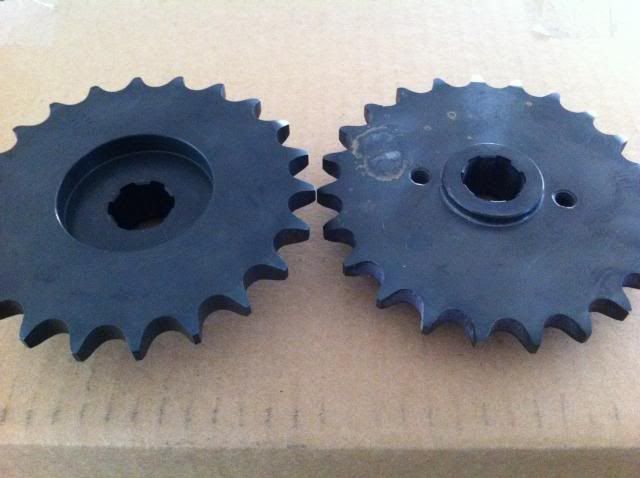 DTT BOTM WINNER
From cold my last Ironhead showed 50 to 60 psi on a similar pressure gauge, before dropping down to less than 10 when fully warmed up. The gauge can be attached via the allen screw on the front of the rear rocker box, and it would've been by now if the set screw hadn't been chewed up and impossible to remove. When the engine comes out of the frame in a couple of weeks, I may remove the rocker box and drill the set screw out. Or I may save the hassle and plumb it in elsewhere.

As for the offset sprocket, they aren't available anywhere in the UK, and look expensive on US ebay. Thanks for the offer of yours, but I already have a couple of sprockets, so it'll cost me nothing to sort it out.

I run a line directly off the oil pump on my Ironhead.