4eyes said:
This pic made me puddle-up a bit.
I have a boy that looked just like that buried in the back yard. He was one of the best dogs we have ever had, and taught my Daughter to bird hunt. Even won a field trial in MO one Spring, that we entered just to get out of the house on the weekend.
Click to expand...

She is the best dog we've ever had too. I think once you've had a Brittany you won't live without one. We are about to get a pup, apparantly it will keep her around for 2-3 years longer. That is if we can find one, the breeder we got her from retired.

DTT BOTM WINNER
We recently lost two of our older dogs within 24 hours of each other. Old age and cancer. Our remaining dog (black/brown Aussie/Bernese Mountain mix) was so upset we knew we needed another dog. I was amazed at his level of mourning. My wife decided we needed an Aussie pup. A few weeks later we rescued a Harlequin Great Dane. I'm pretty sure my wife is trying to make sure we have at least three dogs at all times. The little black/white Aussie pup is a handful but the Dane is sooo easy so now we are back up to three happy beasts.

canyoncarver said:
I'm pretty sure my wife is trying to make sure we have at least three dogs at all times.
Click to expand...

Welcome to my life.

canyoncarver said:
A few weeks later we rescued a Harlequin Great Dane. I'm pretty sure my wife is trying to make sure we have at least three dogs at all times. The little black/white Aussie pup is a handful but the Dane is sooo easy so now we are back up to three happy beasts.
Click to expand...

we used to have 3 danes at the same time, two of them were deaf just to make things more interesting. they were certainly a handful but i wouldn't have had it any other way. but as is the way with danes, they got old all too soon and went the way of old dogs. still miss them all but then we got another one a few months ago and shes more of a handful than all 3 of them together. she's 7 months old now and starting to settle down (a bit), so naturally we're starting to think she needs some company and what could be better than another dane....... 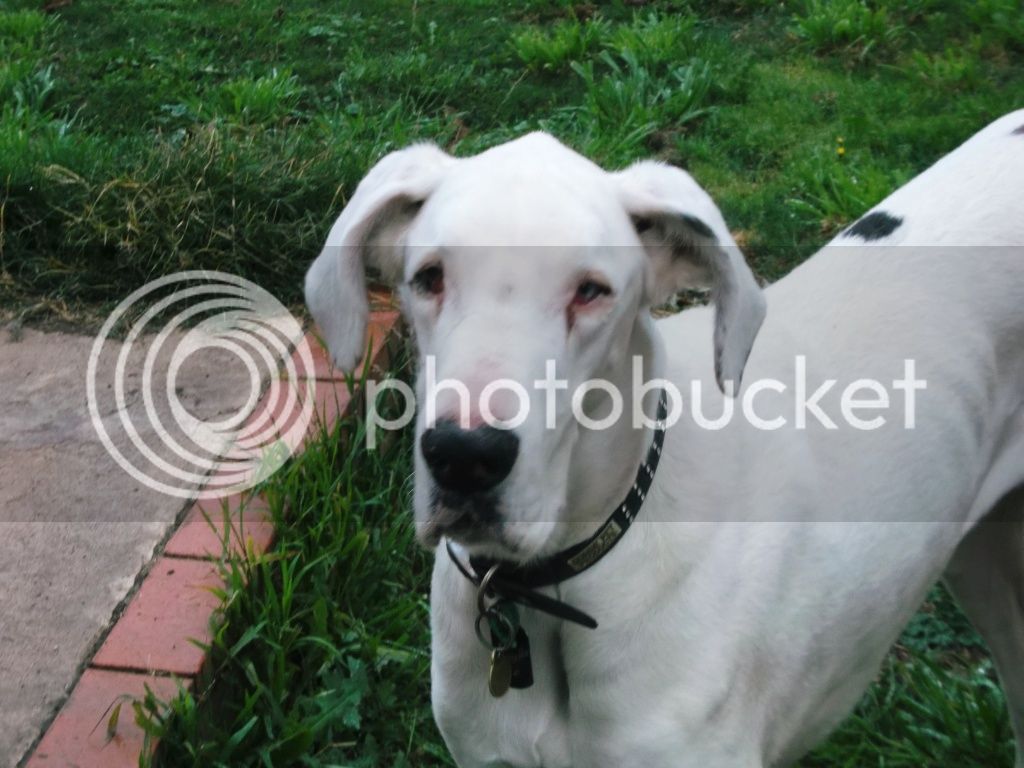 this one is priscilla, one of the 3 we used to have 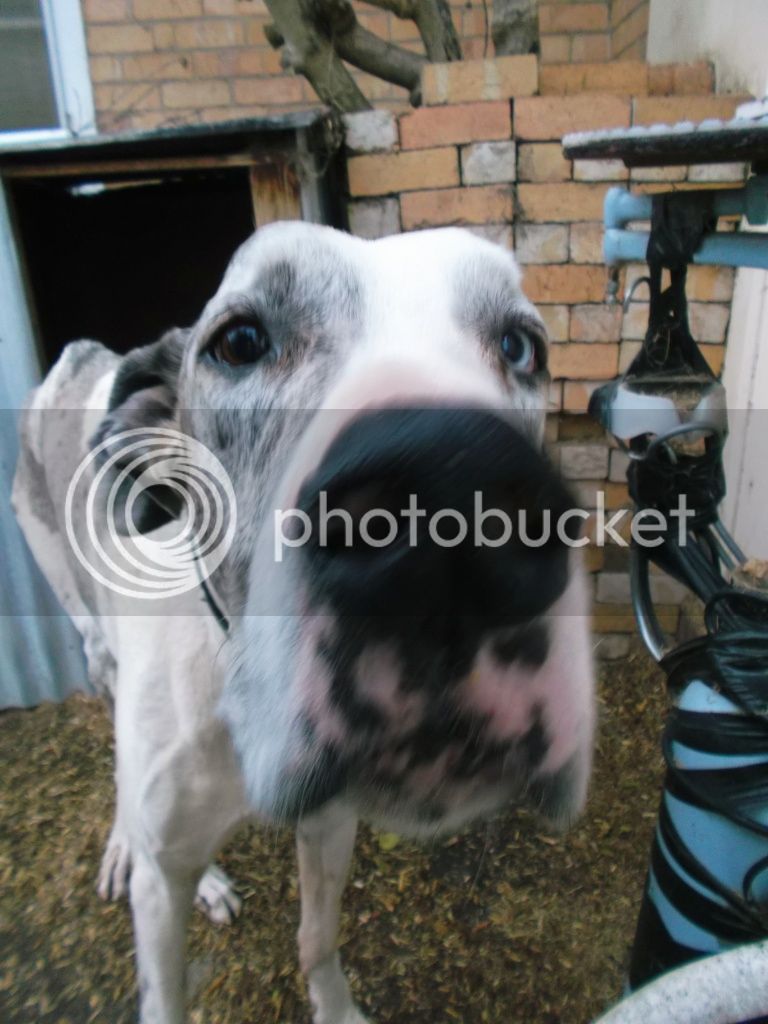 thats hogan, priscillas big brother, both born deaf but hogan had all manner of 'defects', missing muscle groups in all 4 legs, curved and twisted spine, arthritis from birth in most joints. we kept him healthy and happy with drugs and the like but not once did he complain or get grumpy about life. he was one in a million and i'm going to miss him to the end of my days. i was very lucky to have had the chance to be his person 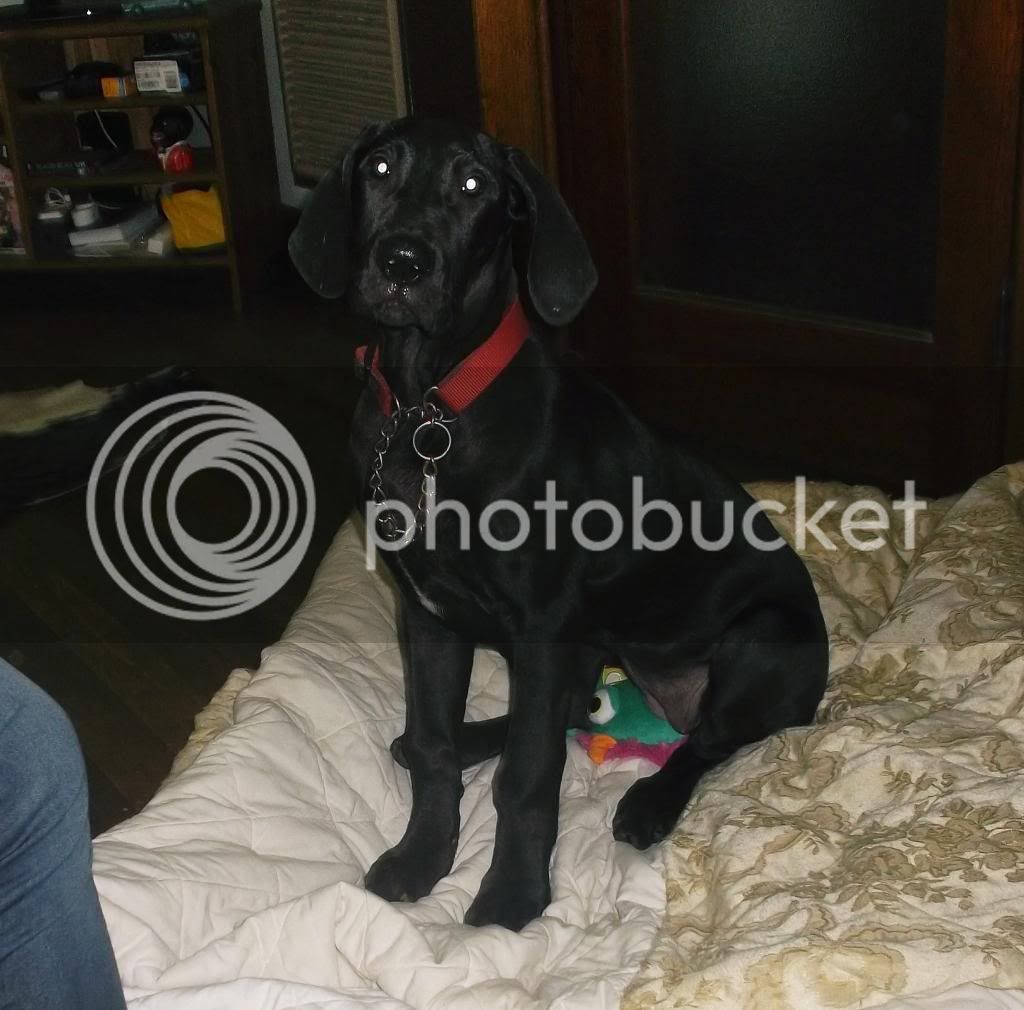 and this is Lei-Lani, our current 'challenge', she's just graduated to grade 2 at obedience school so theres hope for her yet

I have a big soft spot for Danes, great dogs. Would love to have another some day. Seeing yours brings back so many great memories.

spotty said:
we used to have 3 danes at the same time, two of them were deaf just to make things more interesting. they were certainly a handful but i wouldn't have had it any other way. but as is the way with danes, they got old all too soon and went the way of old dogs.
Click to expand...

Cheers to you for taking on the hard cases Spotty.

Until this big guy Thor, I've never had a Great Dane. He's a huge softie and just wants to love on everybody. He was pretty much abandoned in a trailer where a kid was coming over once or twice a week to throw food on the floor for him. Somebody else got him out of that situation but couldn't keep him and my wifes sister brought him to our place. How people can abandon dogs is beyond me.

Also, when filling his food bowl, the amount of drool he can produce is mop-worthy.....

yeah canyon, they are amazingly gentle and sweet dogs for such a huge animal

we take ours to 'giant breed play days' where there'll be 30 or so danes and wolfhounds in an enclosed soccer pitch and they all run free and play like normal dogs do, they know they can play properly with their own size and don't have to be careful like they do with lesser breeds.....

my little girl met her first mini foxterrier tonight and automatically went into a drop onto her belly and ever so gently sniffed the mini and slowly extended her paw to say hello, she can be so sweet
but when she catches up with other danes....just don't get in the way, they'll flatten you, love it

DTT BOTM WINNER
Plagrone, cute dog. Is it just me or does that pic make him look like a big hand puppet?

Well, his asshole is big enough for him to be a hand puppet... The size of his butthole is kind of a running joke

plagrone said:
Well, his asshole is big enough for him to be a hand puppet... The size of his butthole is kind of a running joke
Click to expand...

quote of the day right there

Found a costume for my chihuahua the other day. Lol not quite the motorcycle ride he was hoping for. 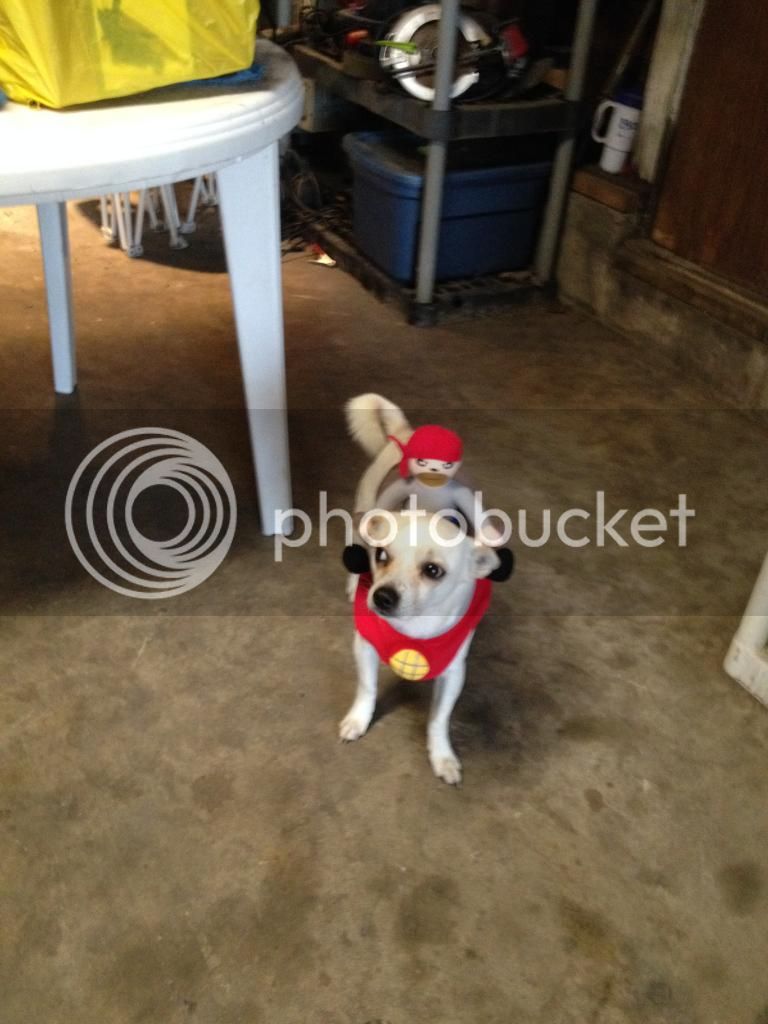 Now THAT'S how you walk a dog.

We had been missing having a pet in the house (our 3 cats had passed over the last few years) and my daughter was hinting at something for her 8th birthday... so, this is Elsa. Yeah, I know. Actually you can blame the humane society for that one, although my daughter demanded that we keep the name. Oh well.

She's still a bit skittish, but is getting used to the house one floor at a time. She loves the dining room chairs and is fascinated by the snow outside the windows.

Here is my youngest... found him in a bag of cloths left behind by a tenant I needed to evict a couple years back. Raised him up from a few days old... he had a brother that didn't make it, they were without their mother for 3 days... more than half their life at that point.

His name is Bitey 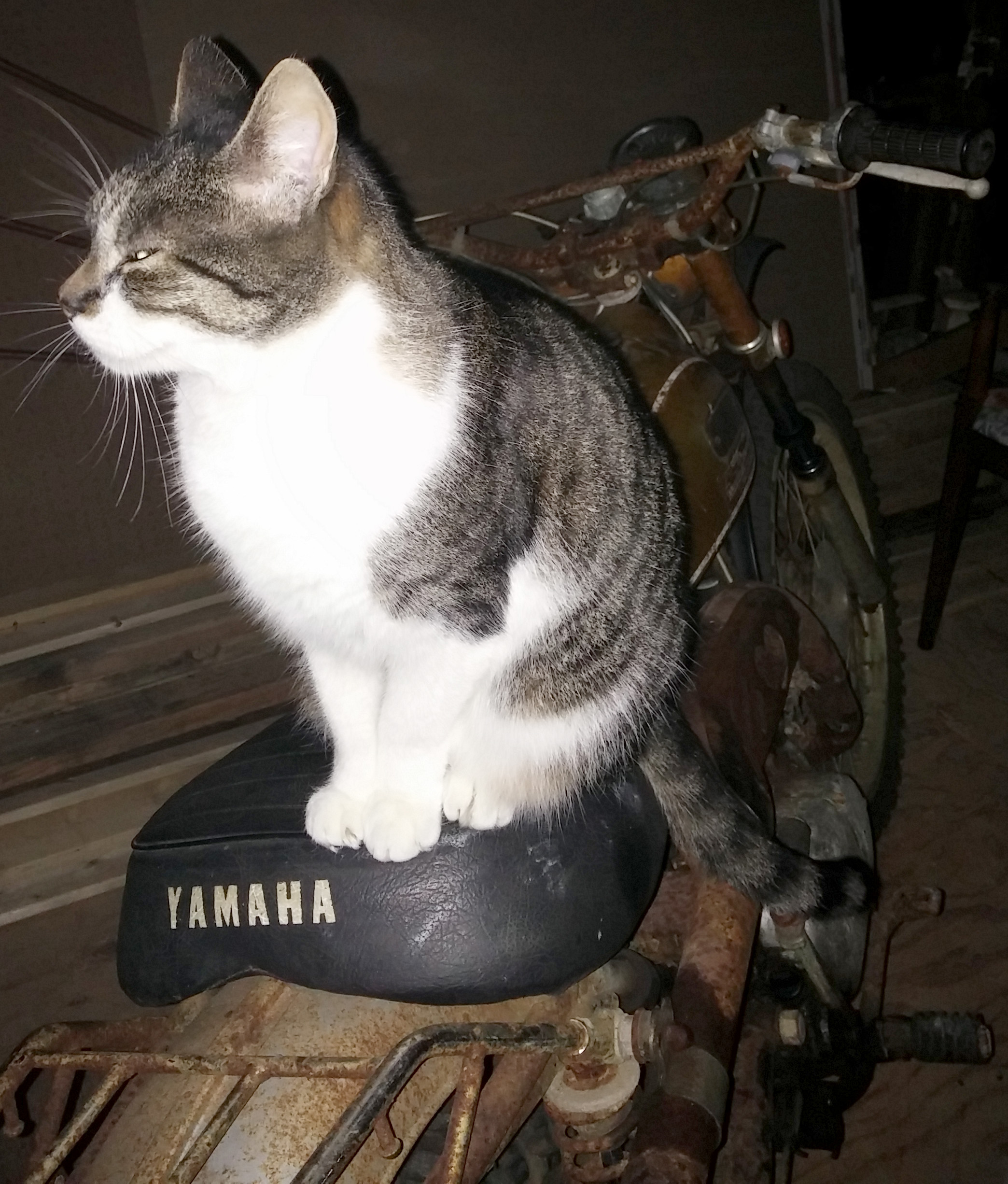 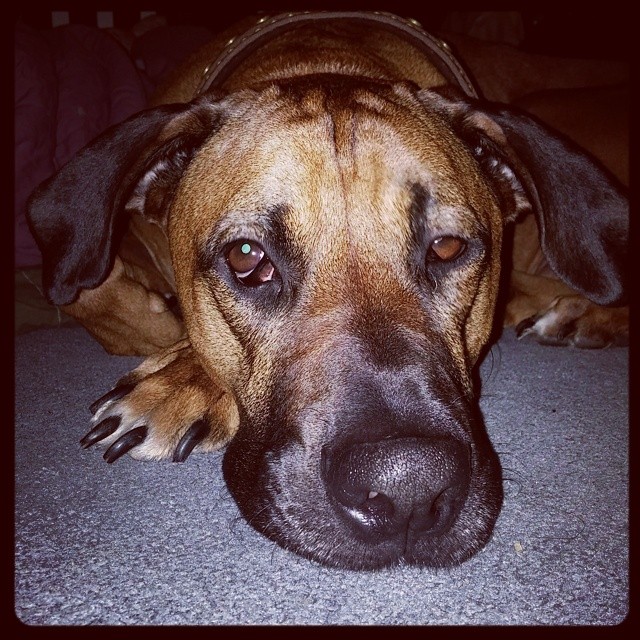 i do like a cat called Bitey, we had one called Alfie, who quickly became Alfie The Bastard, it was like having a permanently drunk scottish skinhead living in the house, he'd start a fight with one of the other cats,have a snooze and start another one as soon as he woke up. he took on all 3 great danes at once one day, refused to give way to them coming through the kitchen door, went up on his back legs and went in swinging both paws to get through, the dogs let him through too
nice looking dane too, you can never have enough of those

Ha! sounds like he was an awesome cat. Bitey was named Skittles on account of having white feet with all black pads... they looked like little skittles (without all the colors obviously). By the time he was 3 months old, it changed from 'Wow, he is a bitey little thing' to just Bitey

I also use to keep him on my shoulder when he was little while I worked on my computer... now that his is almost 12 lbs, I cannot shake him of the habit.

one of our cats (Otto) was orignally a foster kitten, along with his sister, Meg, and they'd reached the age where they could go back to the shelter for permanent adoption. about the last night we were going to have them we let them into the bedroom before they got shut in their room for the night. Otto clawed his way up onto the bed, climbed up onto my feet and walked the entire length of my body before walking across my face and curling up on top of my head and purring himself to sleep.....we've had the pair of them round the house for about 6 years now 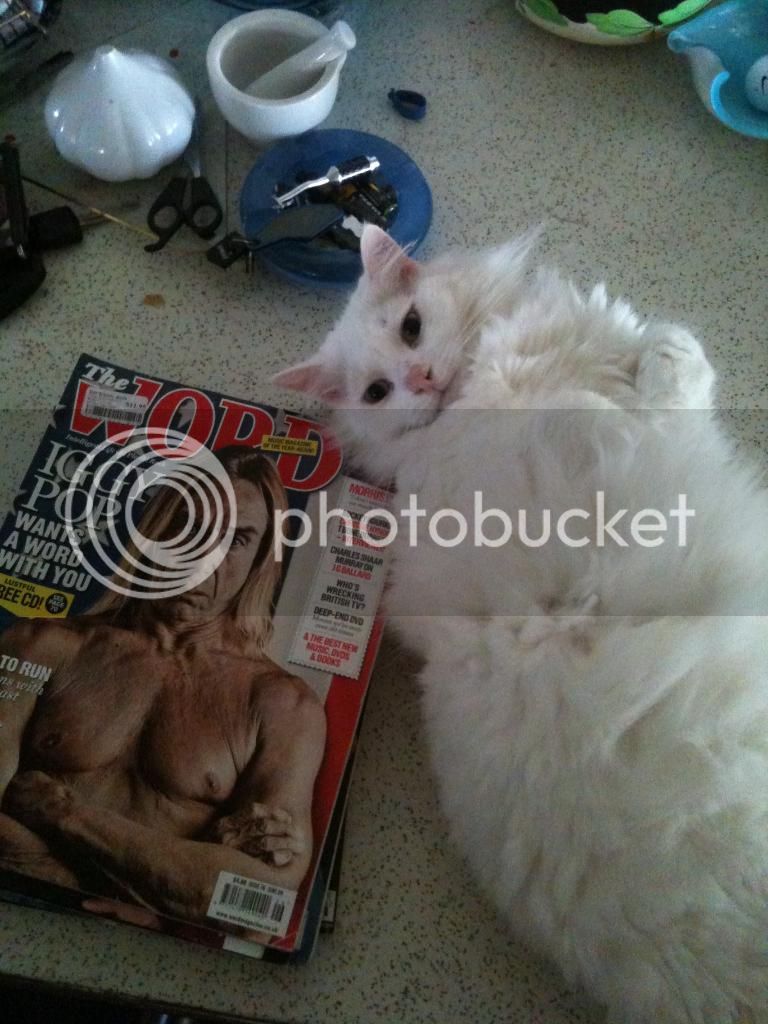 this is Otto hanging with Iggy 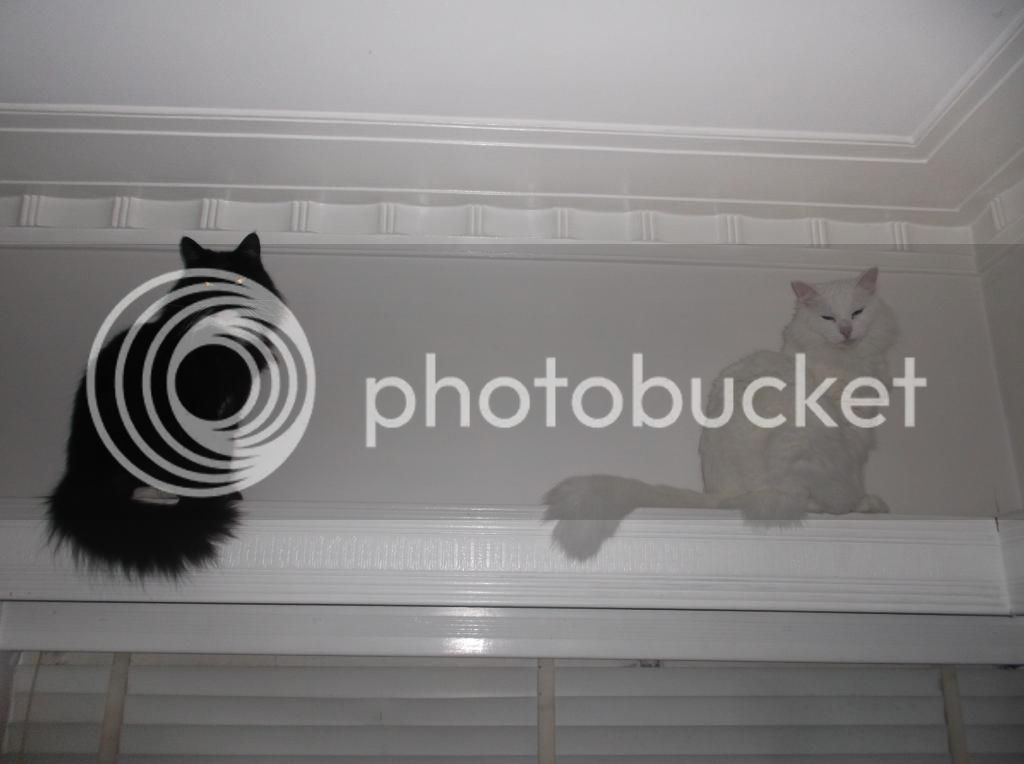 and with his best bud, Gnocchi

spotty said:
it was like having a permanently drunk scottish skinhead living in the house...
Click to expand...