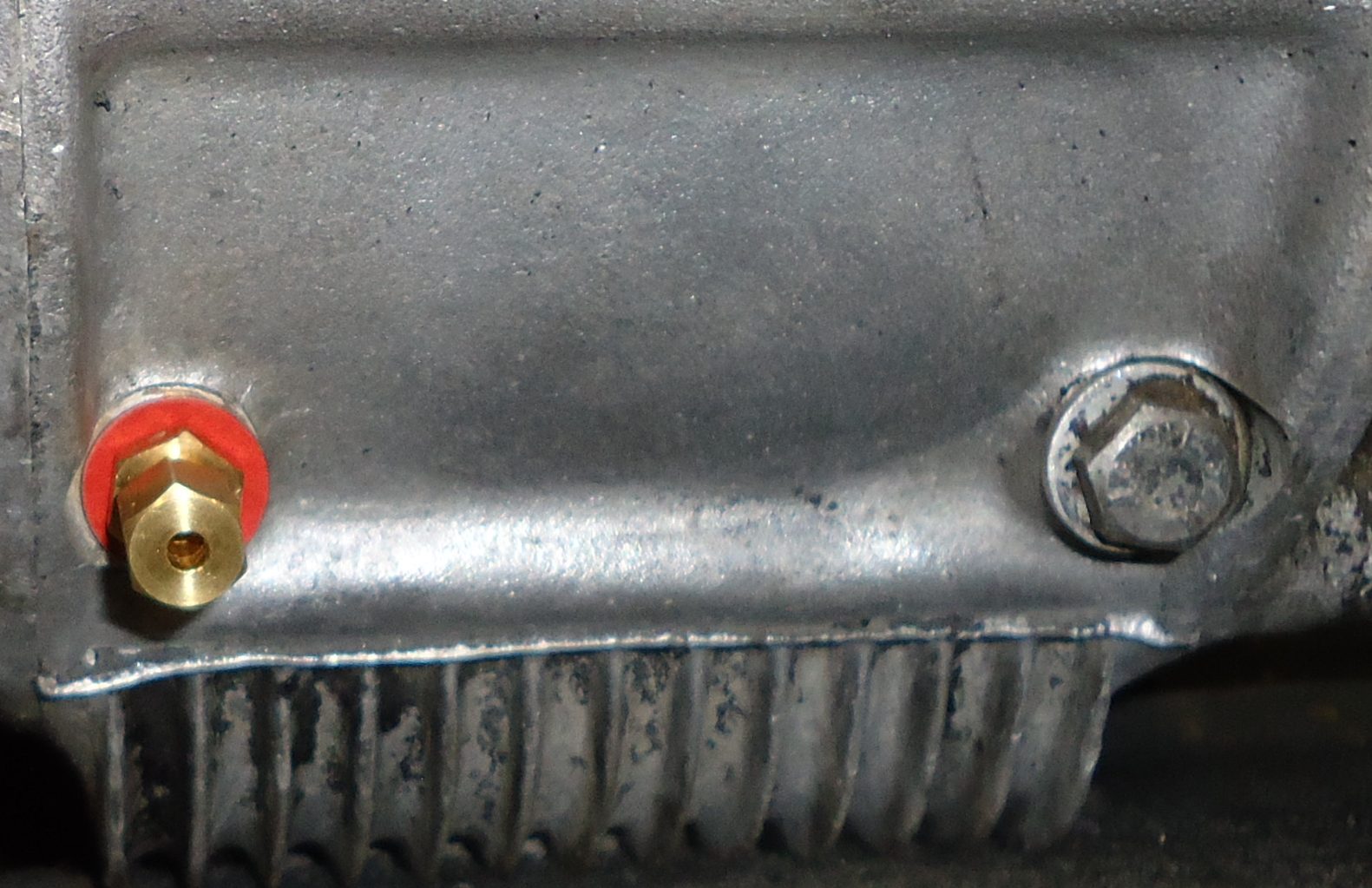 So left side is back together at it is back upright on the dolly. Carbs now fully assembled to the rack and leak testing performed. Looks like the right carb is the one that will cause me grief. Probably the float valve which is all metal right now. ight look for Viton seated float valves if it doesn't lap in easy.

Looks like a great project! Let me know if you need me to send you some rtv sealant....bwahaha..

The way it goes. Finally got the right carb float valve to seal - held for five hours. Had to pull the banjo off to reverse it and connect to the other carbs. Stripped the bowl threads for the banjo bolt! Looked in the hole and saw rotted metal that the treads were in. Another bowl is on order.

Using strips of Scotchbite clamped in hemostats to reach between fins for cleaning. I don't think this engine has been cleaned since leaving Meriden. Also a lot of loose paint - worse on the rocker boxes and heads, so might just clean the remainder off and touch-up the jug fins.

Why leave the engine so nasty (haven't even begun the frame yet - at least it should have no rust) and mount chromed carbs and rocker covers? "Lipstick on a pig" indeed!

Oh, I think we are good on RTV. 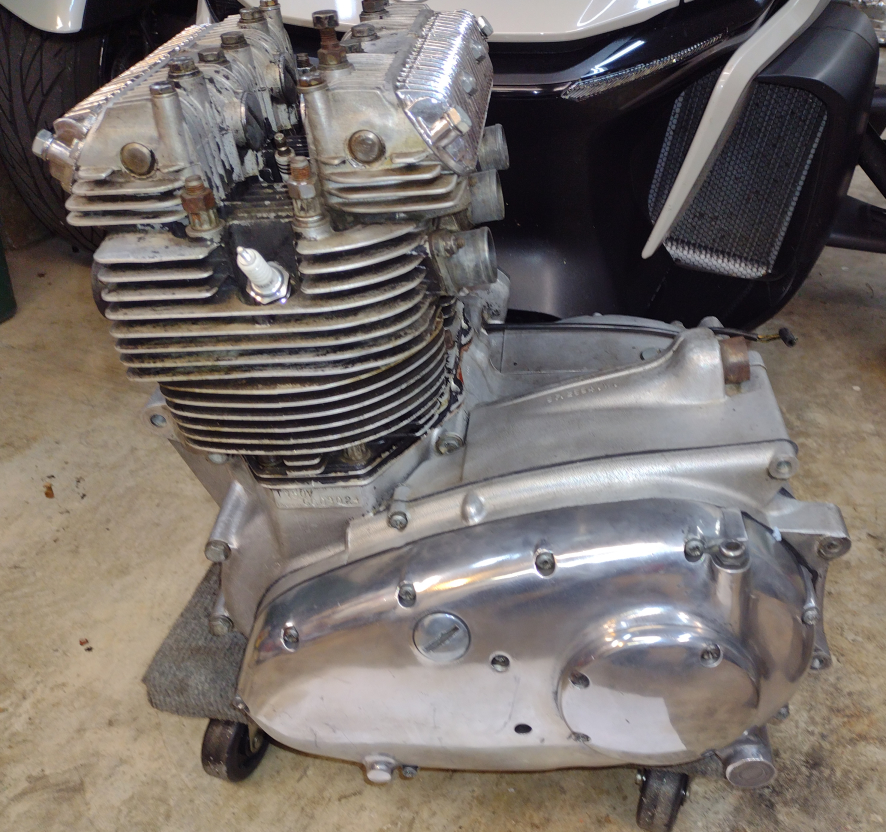 Beginning to burn-out on engine cleaning, so pulled the wiring harness out. One of those that's been modified, jumpered, bypassed, rearranged, re-taped with vinyl electrical tape that has harded, left its gooey adhesive on the wires, and is unraveling. Also, much of it has been painted over with black spray paint. After getting the tape off, discovered kerosene is good at removing the goo. Then acetone to remove spray paint and kerosene film. About half-way done with that. Really glad I'm doing is as places get discovered where insulation is burned, hardened, or cut off. Very little of it makes sense compared to the diagrams.

Decided it is already so bad that the harness needs re-done with negative ground (already have a Sparkmoto reg-rec). The Lucas zenier will be retained as a hood ornament. Meridan used about 14 gauge wires for much of this. That would be great on my old GL1000 300 Watt systems, but the whimpy Lucas single-phase 120 Watt shouldn't need wires this big (kick start, so no starter draw). Many will probably be down-sized. I'll probably retain many of the Lucas bullet-style connectors, though. They seem to still be in good shape, just need removed and re-soldered into the new harness. Making a new points harness as the old one had stiffened up and had too many scars in the insulation.

Becoming quite a mix of old and new. Keeping the points (actually cleaned and refurbished the set that was in it). Has zero lights on it, so they will be a combination of aftermarket and repurposed GoldWing parts.

Then back to more cleaning down in the fins of the heads.

DTT BOTM WINNER
That looks better than the "before" shot.

For ignition and headlamp circuits, thicker wire might be a good idea to minimize voltage drop. Or use relays on those circuits plus a thicker feed wire.

Which alternator stator is fitted on that bike? I used to fit the higher output alternators when they were available. RM23 or something like that. Too long ago to remember....

There are some nice harness supplies here.
https://revivalcycles.com/collections/motorcycle-wiring-harness

I'm also a huge fan of F4 tape. I also know it as cohesive tape as it only sticks to itself and no gooey mess, ever.
https://www.aircraftspruce.com/pages/cs/tape_electrical/rescuetape.php 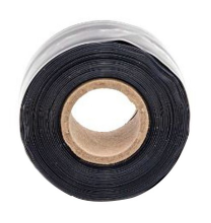 Probably painted with bed liner as thick as it is.

This has the wimpy 120 Watt RM20/21 alternator. Really should be all that it needs, being kick-start. I'll check Revival for the wrap tape. This thing doesn't have handlebar switches yet. Will probably go LED on all lighting, so that won't require much power. Key switch is back under the left side of the seat, so will only need one heavy lead to the front to handle all lighting. Ignition power won't have to travel far. Cleaned more wires off today. I can't figure out what someone might have been trying to do with the wiring. Doesn't follow any of the schematics, and there are a lot of twist-together splices. I'll be able to use ~25% of the original wire, but most of the connectors.

Previous "electrician" was probably doing the hunt and twist wiring method instead of a wiring schematic. I saw this a lot when the British MC industry tanked and bikes ended up with someone who didn't understand Lucas electrics. Will it run/start without a battery?

Rider52 said:
Previous "electrician" was probably doing the hunt and twist wiring method instead of a wiring schematic. I saw this a lot when the British MC industry tanked and bikes ended up with someone who didn't understand Lucas electrics. Will it run/start without a battery?
Click to expand...

Doesn't have the eliminator cap (although it could be added). For that matter, it is missing a lot of things. Long-term project, and not looking to fully restore. Just get it safe, dependable, and looking/riding good.

I have absolutely no doubt you will do it justice. Both my old Triumphs have capacitors. I put an old 12V Bates headlight on the TR25 and had the expected dimming at idle. I replaced it with an LED headlight and it is much better. I'll probably do the same on the T100 that I picked up this week.

The ends of the valves don't look so good. (at least the exhaust valves, haven't got to the intakes yet). And, this is 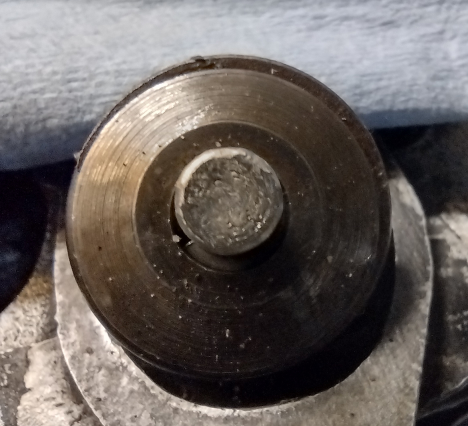 DTT BOTM WINNER
You can either get some hardened valve stem caps or a set of Norman Hyde big foot tappet screws to spread the load.

Afraid spreading the load won't help. The Stellite is already flaking off. I have wear caps on order. I will just have to mount one up and make the decision if the stems need ground down first, or the added 0.080" won't change the valve geometry too much. Some show some fairly bad flaking. Hope it hasn't eaten bearings. That Stellite is hard stuff! 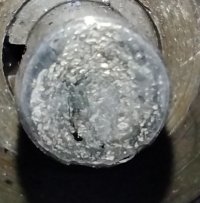 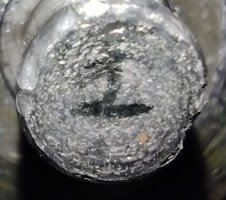 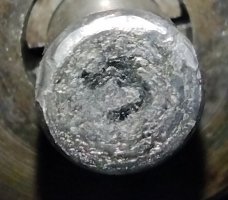 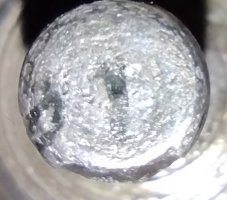 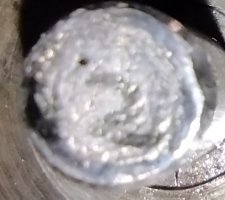 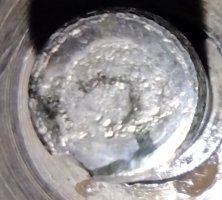 Wear caps came in. I put one on #3 exhaust valve stem with a coat of Dykem on it, Installed that push rod and rocker box (no gasket). Adjusted the rocker clearance. Rotated the engine through about six openings of the valve. Pulled the box off and here is a photo of the wear cap. Path of the adjuster tip is clearly visible and just slightly off-center. Left in the photo is the front of the engine. I'm satisfied that this will do without grinding the stem. The Viton-tipped float valves came in, too so that is also moving forward.

DTT BOTM WINNER
I tried stellite tipped valves and they came out like yours. The valve adjuster more or less nibbles it off.

Got them all on and valves set. First time doing this on a T150. Quite a task getting all of the push rods into the correct places and the tubes seated on their seals correctly. Looks like the caps will rotate easily each stroke. Replaced the float valves with Viton-tipped. Right now have the carbs set up with isopropyl on them to leak check.

Discovered that the adjusters were hitting the rocker box covers. Took them all off, chucked them gently in the lathe (inserted in Tygon tubing), spun at low speed while using the cut-off wheels in a Dremel to slice the square drive ends off. Then stoped the lathe and gave each a straight screwdriver slot. Now, they don't hit the cover and are much easier to adjust.

Decided to begin reworking the wiring soon, so injected 50 ml oil through the rocker feeds and another 50 ml shared by the valve spring pockets. Put 25 ml down each pushrod tube also. Then, buttoned it up and covered the engine with a large plastic bag and rolled it under the workbench.

Pulled the rolling chassis out of the shed and rolled it into the garage today. Sprayed it down with foaming Gunk (over pans) to get that soaking. I need to figure out where and how electrical components are mounted. It came with the plate that the coils, etc. mount to tied to the upright column with a U bolt and a flange welded to one end. Doesn't look stock. At least the battery box is complete.

Figured out where the component tray mounts. Rolled the chassis outside and gave it a couple more shots of foaming Gunk, let it work then hit it with the pressure washer. Cleaned some off but not all. Hit it wit Gunk and pressure again. Went for a ride on the Spyder (up to 65 F today). Came back and hit it with Gunk again. Scrubbed with nylon and brass brushes, hit it with Gunk and even oven cleaner in the worst spots. Hosed it off, let it dry and brought it back in. A couple places still caked so I hit them with carb cleaner, then putty knife. Still resisted but I think the worst is gone. Combination of motor oil, chain lube, dust dirt and grease. Worse on left swingarm bolt, brake torque stay anchor, and left lower frame nuts.

Next, I'll get some measurements for wiring and then take the frame apart for further cleaning, sanding, and etching primer. A GL1000 headlight bucket fits the mounting hoops perfectly.