Suzuki FA50 Moped - "The Bumblebee," or, my first two stroke

hurco550 said:
is the spark plug in the center of the head. if so and you wanted to we could mess around with some squish stuff on the lathe.
Click to expand...

And double yes to that scooter.

I may have to mess around with some homemade expansion chambers somewhere down the line if I ever get this thing going. Maybe I should've been looking for parts to mod my scooter at the Barber swap meet. LOL

DTT BOTM WINNER
heck, if I screw it up (which is a real possibility) you can replace it for 25 bucks to your door haha

DTT BOTM WINNER
or pull out the head gasket and o ring it.

"One of the fastest and virtually free improvements is increasing compression by milling or shaving down the head. Raising compression boosts power across all ranges. The original motors had low 6.5:1 compression. It's possible to remove at least 1 millimeters from the head, bringing the mating surface even with the cooling fins, and remove the head gasket while still using 87 octane without issue. Compare head gasket diameter to combustion chamber diameter for a gauge of piston clearances."

Yep, I was reading that article when I first picked it up. At least a used head is cheaper than the damn stators were, ha!

I want to get it running before I go messing with any of that though, I have rings coming in within the next few days, hopefully it fires up. If not I'll have to dig deeper.

Rings came in so I pulled the barrel off. I noticed some pretty significant scoring on the cylinder wall that wasn't there when I initially opened it up. So there's my compression loss. I cut up a scotch brite ball from HF and used it as a redneck hone, it actually worked pretty well. Disclaimer: I would not recommend doing this. I will probably try to source a barrel from the 'bay. 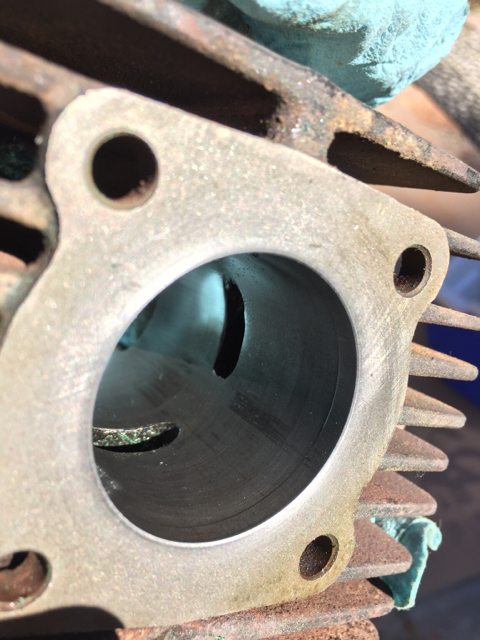 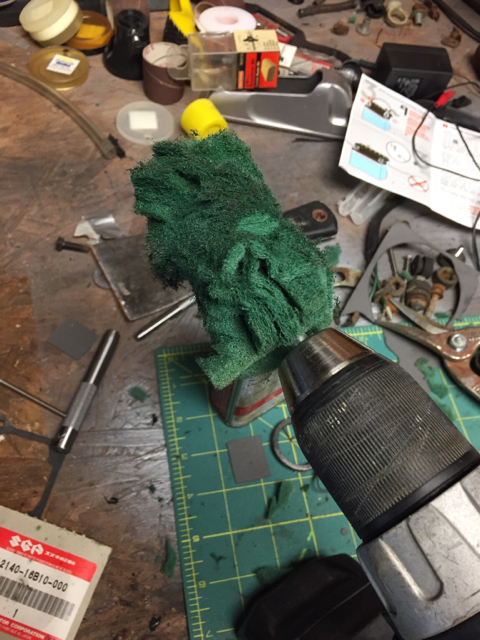 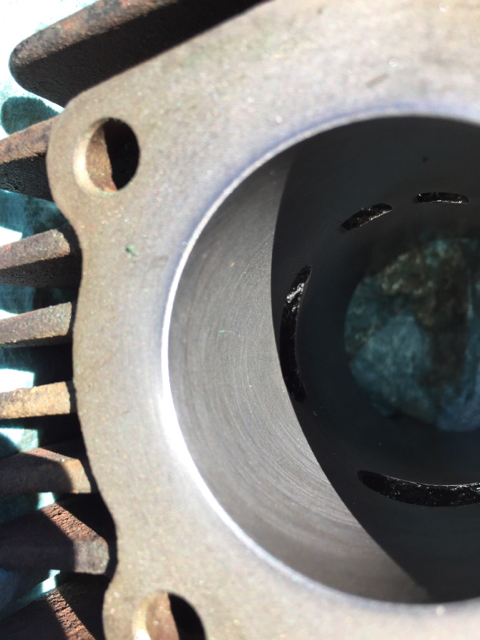 Sent from my iPhone using DO THE TON
K

I see a couple of lines going up and down, are they deep enough that your finger nail can catch it??
If not, I wouldn't be too worried about that and toss the rings on and give her a go

or this one with more ports

DTT BOTM WINNER
Yep, the scoring is pretty bad, so I'm not even going to bother putting the new rings in and ruining them

I wonder if there is enough meat to have this cylinder punched out for that 60cc piston on 1977.

Either that or I will be saving my pennies (literally, thats the budget limit for this thing) for the kit from treatland.

Found a 1.0mm oversize piston and ring kit on eBay for $20 shipped. I'm going to call around on Monday and see if I can find a shop that will punch it out for a reasonable price.


advCo said:
Found a 1.0mm oversize piston and ring kit on eBay for $20 shipped. I'm going to call around on Monday and see if I can find a shop that will punch it out for a reasonable price.

Mototec usa $35 for a bore, sunnin hone and chamfer. He does great work


hurco550 said:
Mototec usa $35 for a bore, sunnin hone and chamfer. He does great work
Click to expand...

Yes he does, and he's awesome to work with. Guys like this are rare anymore.

DTT BOTM WINNER
I decided to clean up the piston/bore as well as I could and put the new rings on, since they only cost me $10 and if I have to bore it out they are of no use. The compression is holding steady at 90psi and even with a few squirts of oil only makes it up to 92psi. I am convinced this thing should run with that value.

I put a timing light on tonight, as well as a dial gauge to confirm TDC. The flywheel is keyed. The CDI has a curve as pictured below. 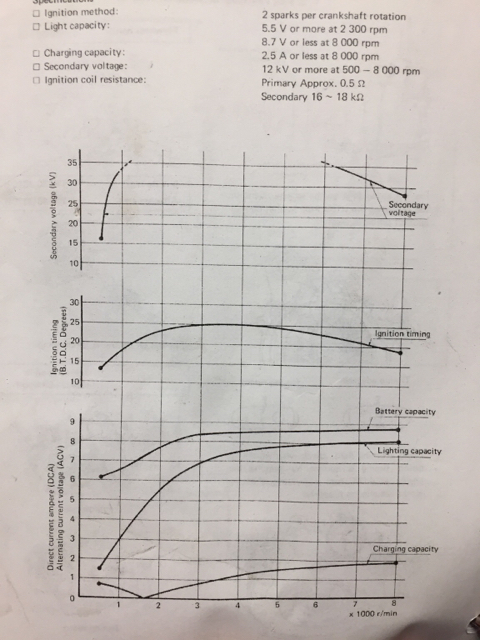 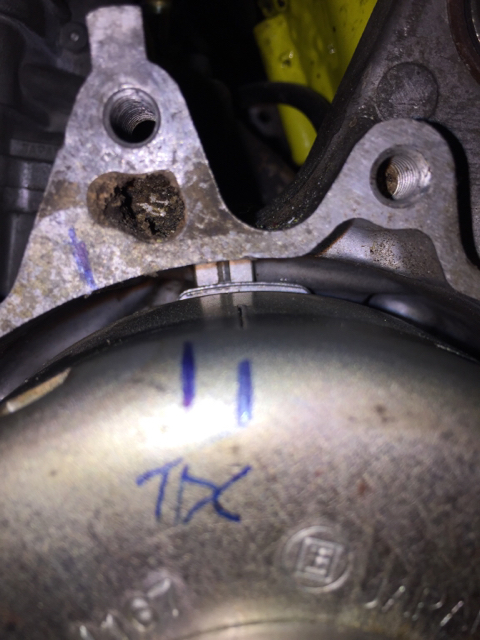 When rotating the crank with a drill (obviously not 4k rpm), the plug is firing at the blue mark on the case, which is about 90 degrees from the cast timing mark. 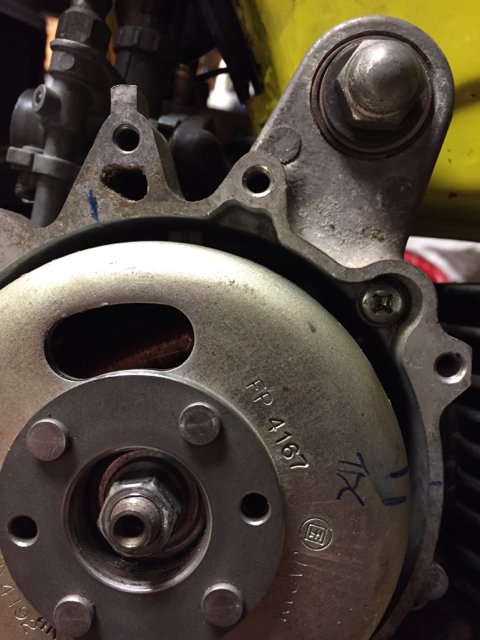 I need to confirm the ignition system is working as intended, Is there a "base timing" like there would be on a points ignition, or is is not possible with the curve of the CDI?

Does degrees bTDC refer to degrees on the flywheel/crank, if 1 revolution = 360 degrees?

It just seems as though the plug fire is just happening WAY too late after TDC to ignite the mixture. I should mention that I tested the CDI unit on a running moped and it is working.

Timing is everything .....can you rotate the hokey pokey behind the the flywheel and get it to fire closer to the mark? .....post a detailed question with pictures on the moped army lots of die hard FA guys there....

DTT BOTM WINNER
I must have mixed up which side the start and end of the wire went to when I rewound the stator. So in the midst of rotating the stator plate and going around in circles trying to get the timing lined up, I decided to try the simplest thing and switch the two leads coming off the primary winding to the CDI. Squirted a shot of ether in there and finally heard it fire.

I'll recheck the timing after i fix the exhaust and get everything back together.

That's great to hear, nice work figuring it out.