DTT BOTM WINNER
I guess when the "on switch" is on, the two yellows go into the reg/req and out the "I." and then to the starter terminal that the positive battery cable is attached to.

I still have a lot to learn when it comes to electrical.

DTT SUPPORTER
I'd open up the alternator cover and take a look at things. I think you should have three yellows.

only 3 wires coming out. I felt the harness and there are no more cut short and hiding in there.

DTT SUPPORTER
How about under the cover?

DTT BOTM WINNER
Looks like the Saprisa alternator is correct. 2 yellow and a red direct to the battery.

DTT SUPPORTER
Interesting. I didn't know about too many bikes that use generators.

Sounds like you maybe just need a new regulator then?

DTT BOTM WINNER
You have the same confusing setup as my Guzzi, same Rectifier/alternator, the two yellows go to the rectifier and the red goes directly to the battery. Which isn't what I'm used to seeing on other bikes I've worked on. I asked for advice about this, and got the following answer..

''The control device can be anywhere in the circuit, here it's between chassis and each yellow wire connected to a rectifier inside the regulator. When the yellow wire goes Negative the rectifier clamps it to the chassis which forces the center tap (red wire) to go Positive and push current to the battery.

Half a cycle later when the other yellow wire goes Negative, it's rectifier again forces the center tap to charge the battery.
This idea was very common in old tube radios.

In this arrangement each coil only works half the time

In this case the rectifiers are not just common diodes they will be Silicon Controlled Rectifiers that can be turned off when the battery is up to Voltage effectively breaking the circuit''.

Also note that the ground wire to the regulator is very important, ground it to a bolt or screw on the engine.
B

if it's got a saprisa can you piss that off and fit a ducati alt and reg from a later model, even a small block 750 breva or nevada. never seen one like this fitted to an oldie.

DTT BOTM WINNER
OK I got it sorted.mi didn't have a hot 12v to the rectifier. Put that in place and all is good.

Went on a 45 mile ride today with zero issues. The only thing I need to do is tweak the shifter so that the throws are not so long. I got a few false neutrals because of that.

I also have a tiny tank! I was almost empty and put 1.2 gals in to fill it.

I went out just before dusk and took some pics. 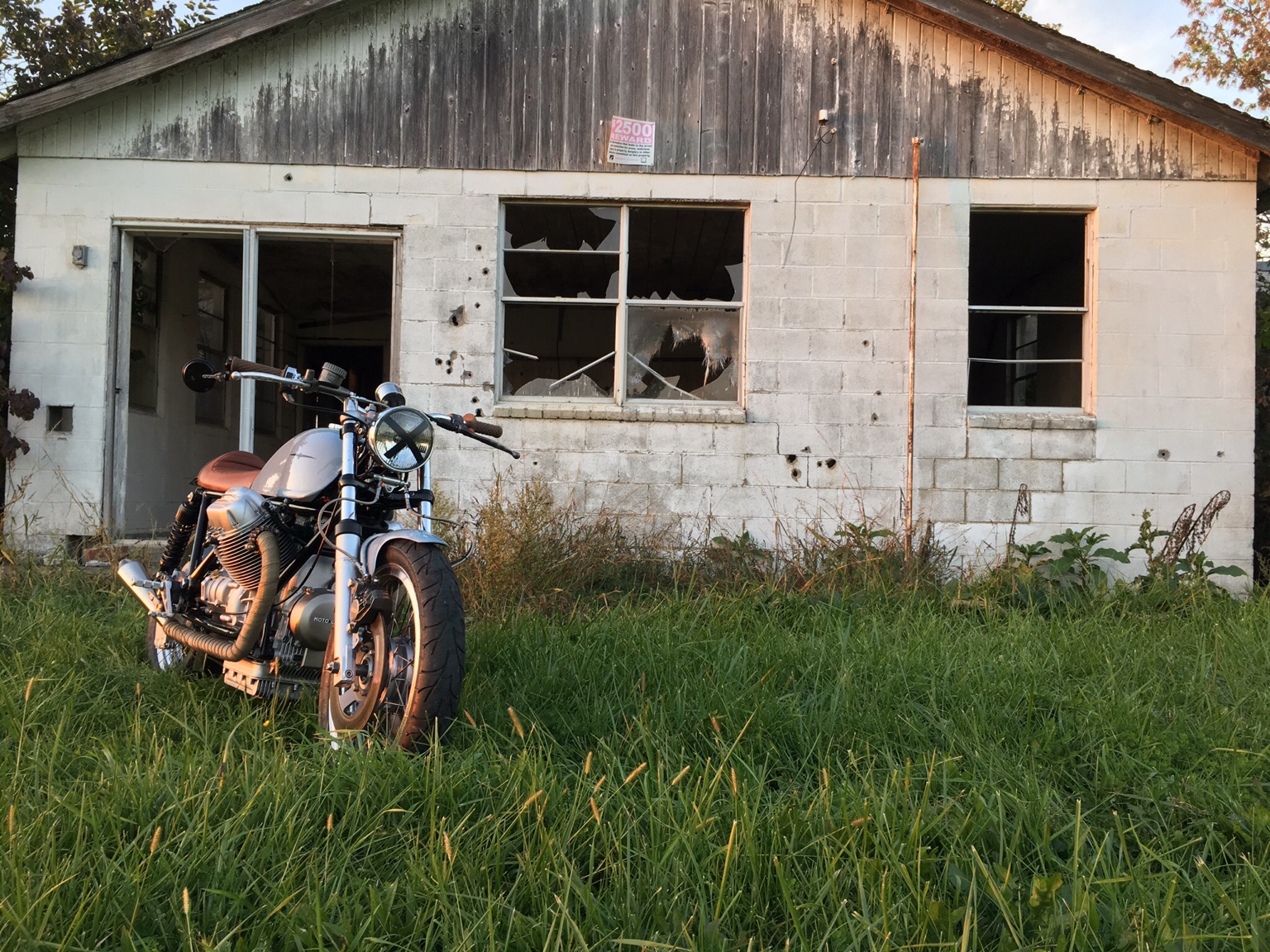 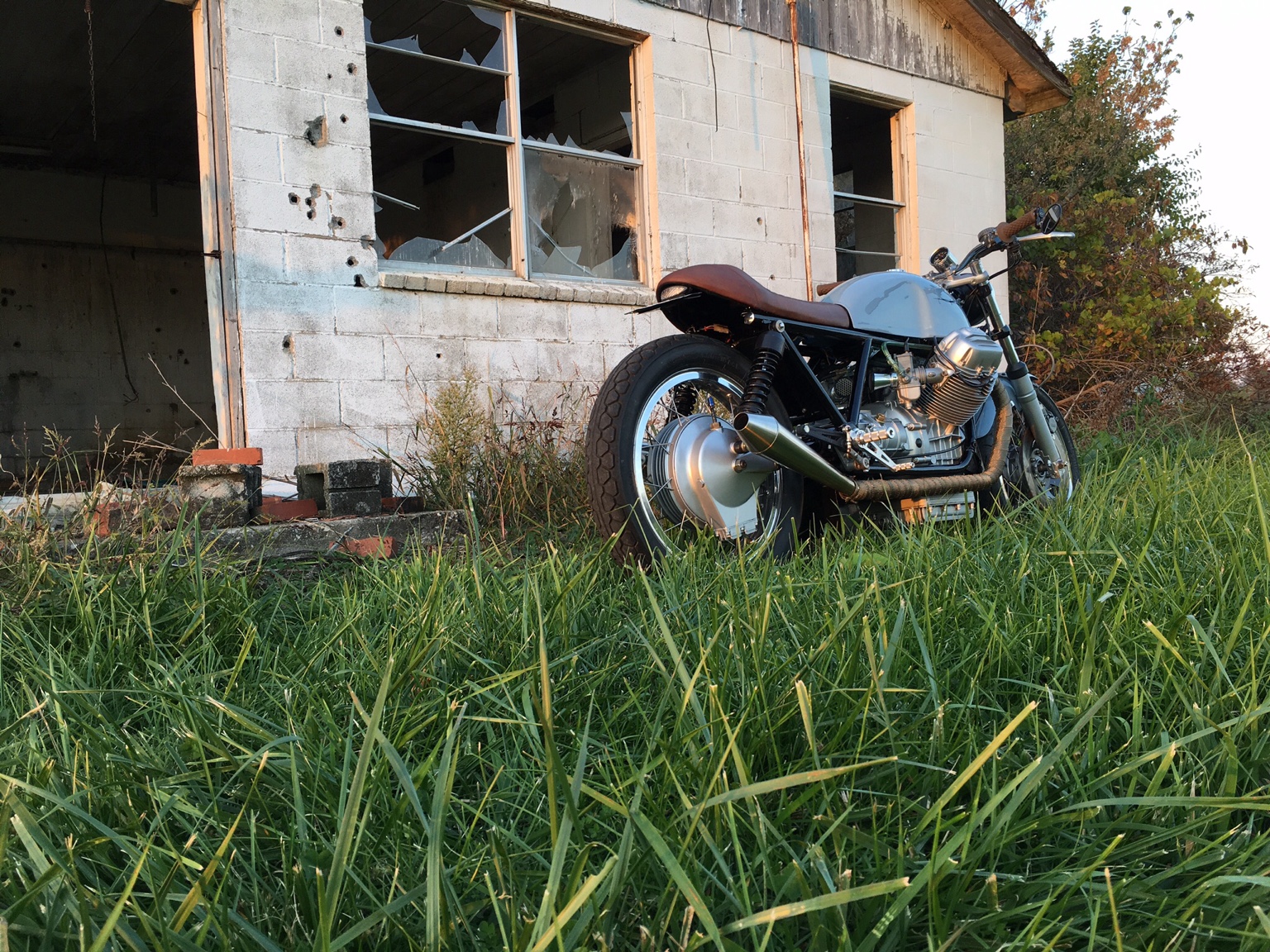 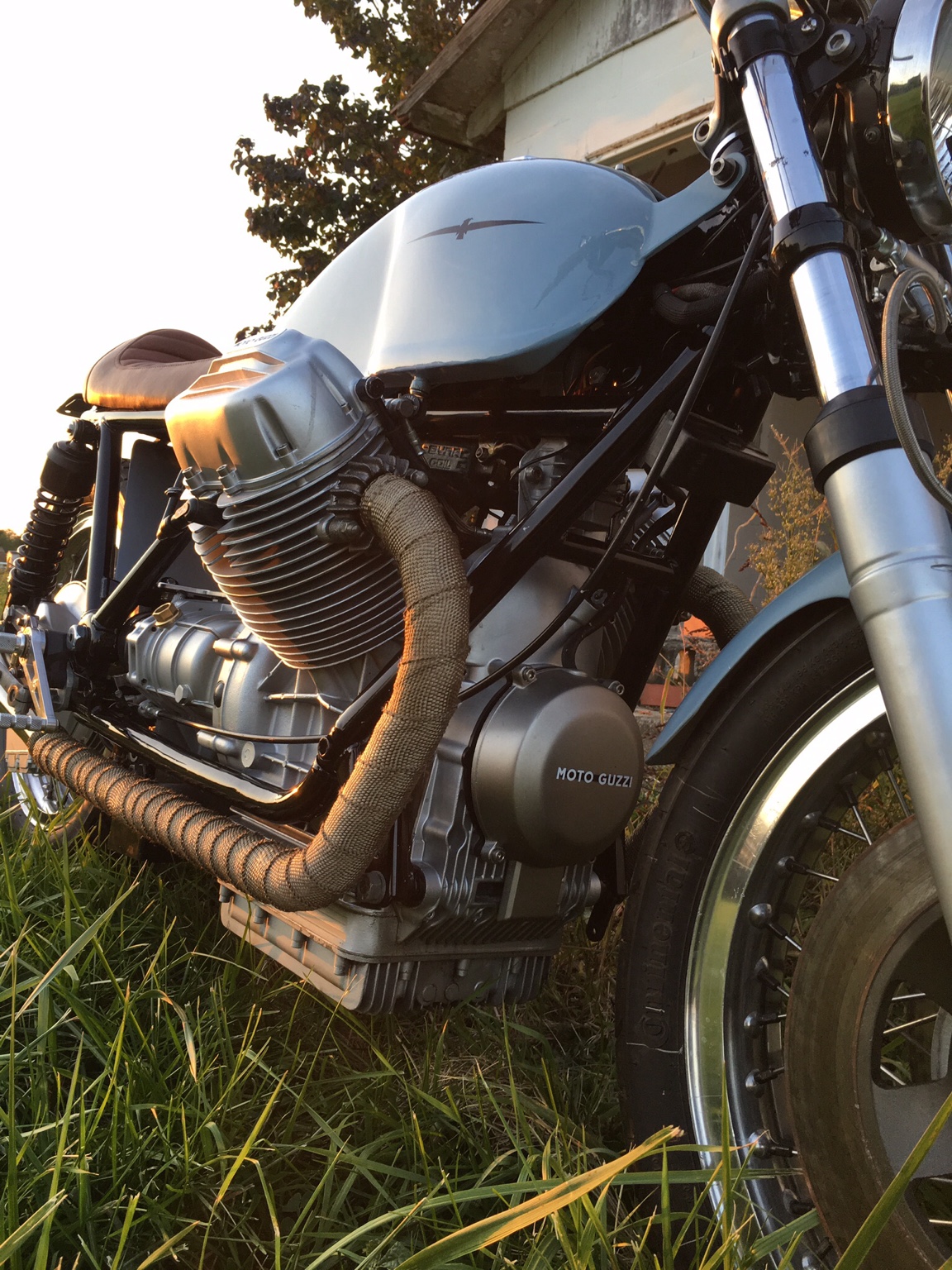 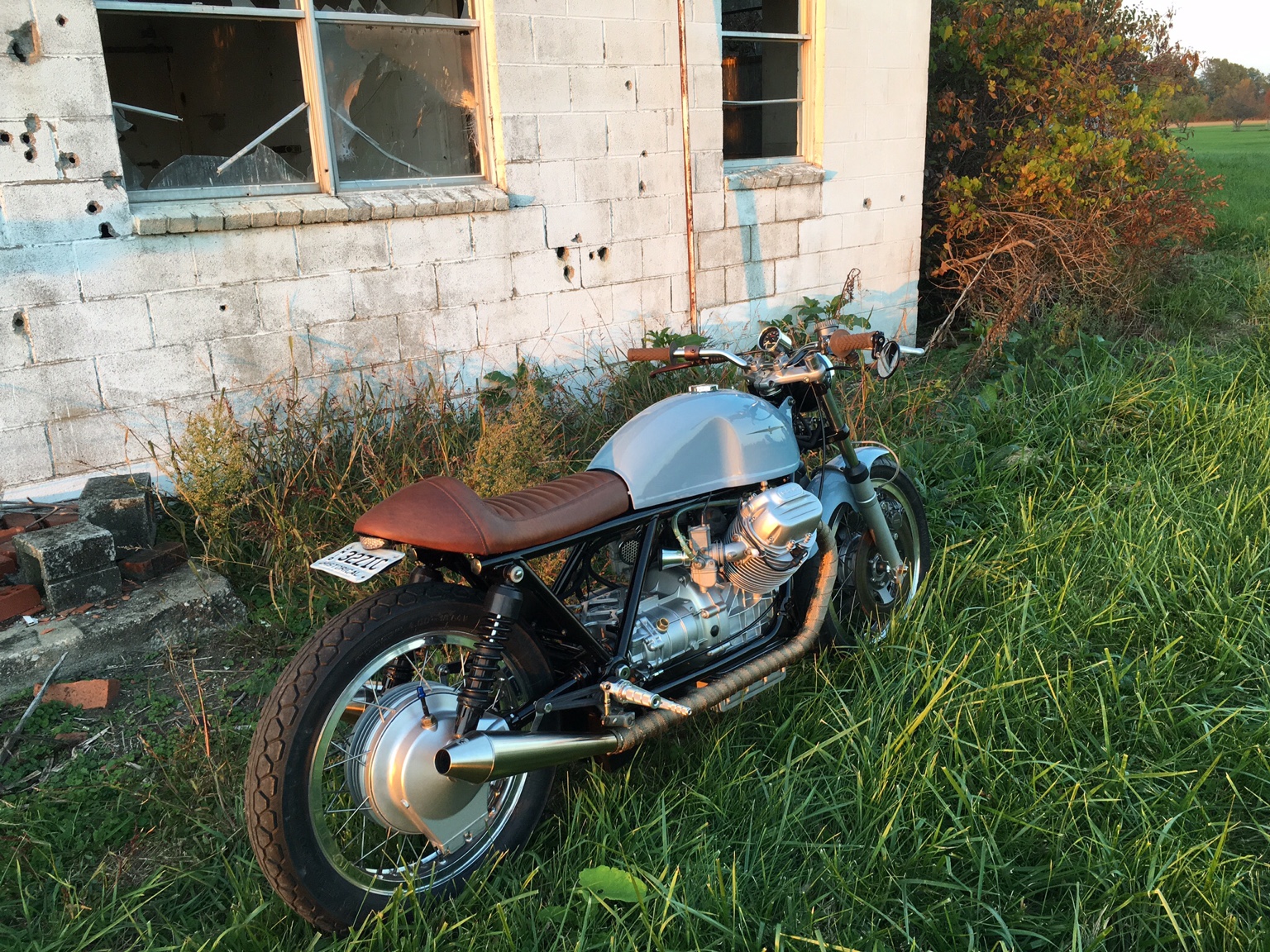 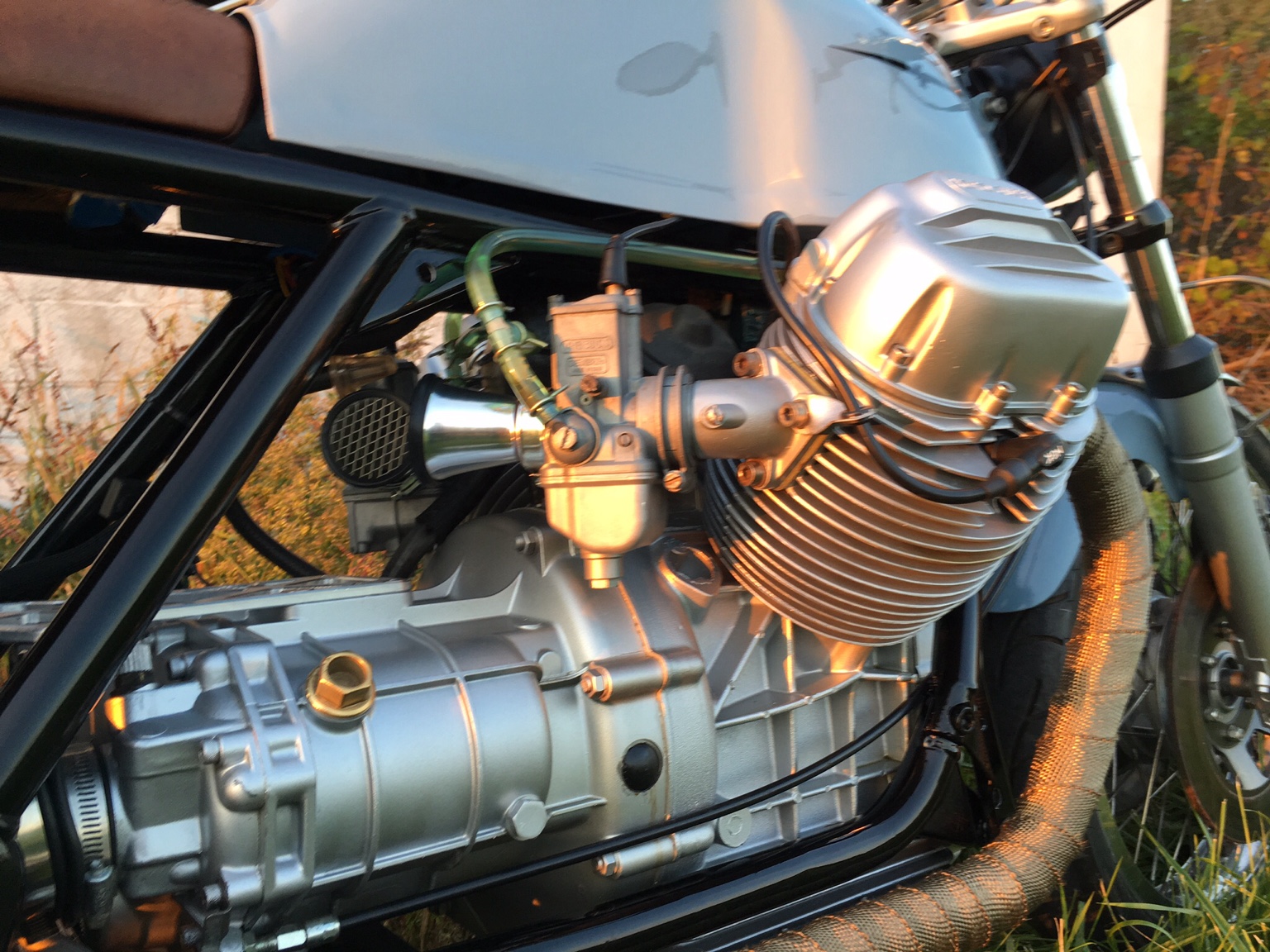 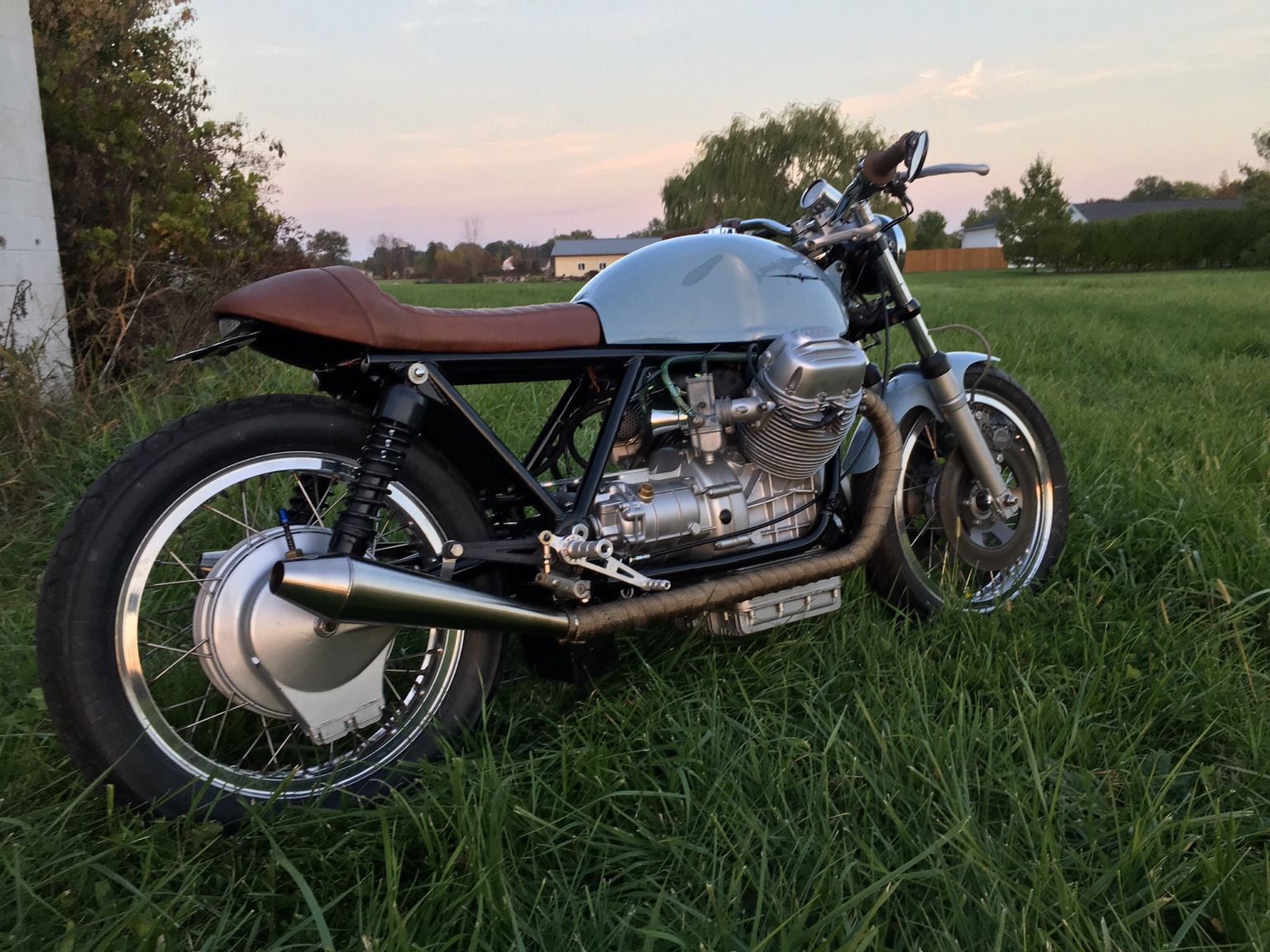 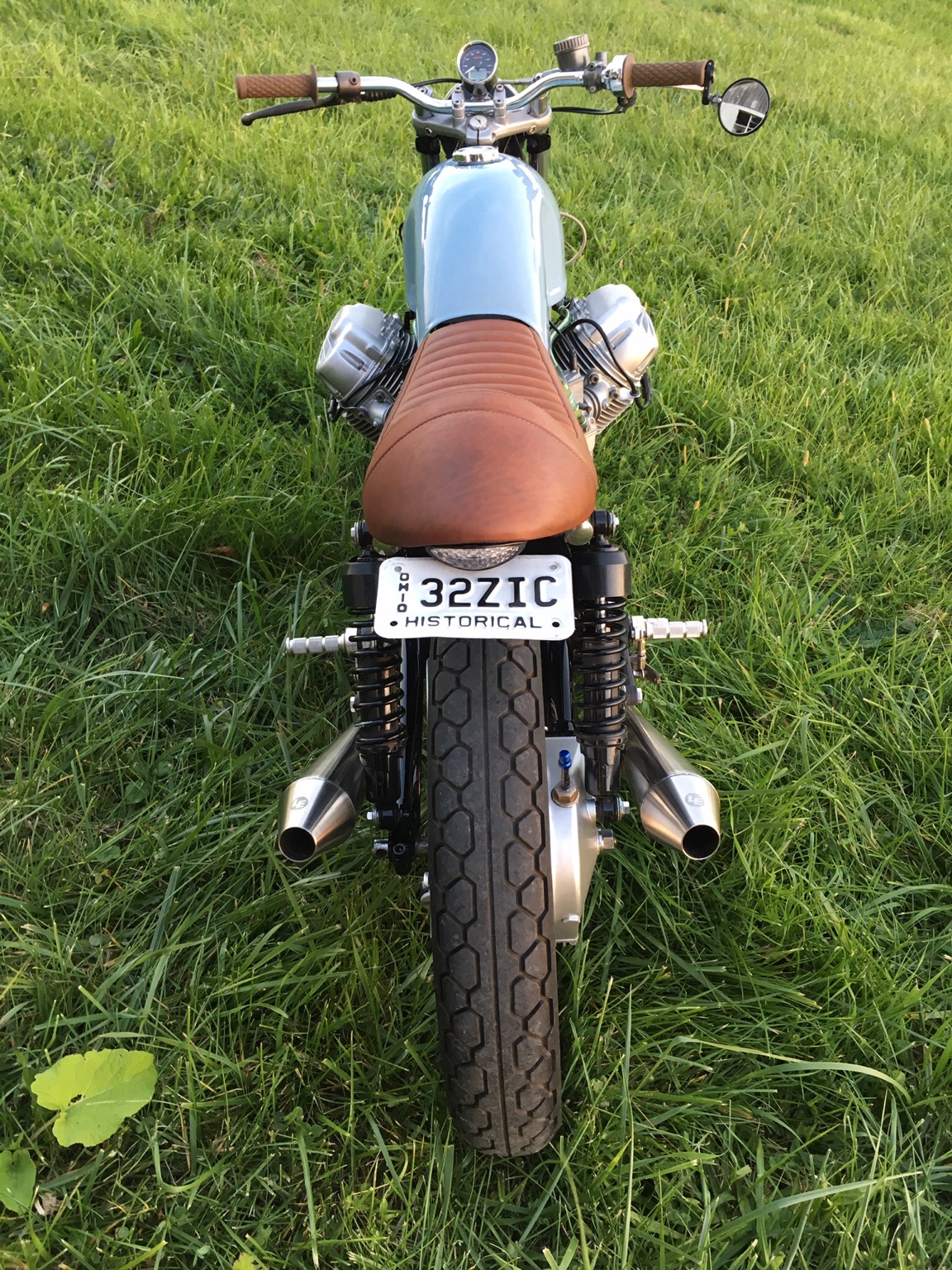 Sent from my iPad using DO THE TON
P

Good to hear you sorted it out.

Nice pictures in the sunset. And even the closeups are nice, a lot of bikes are best "from some distance" if you know what I mean.

False neutrals is a known issue on 5speed guzzis especially between 2 and 3. I get used to keep pressure on the shifter pedal while I release the clutch, then it stays in gear.

Do you only have 1.2 gallon in the gastank? Mine goes around 15km/ltr which equals something like 33miles per gallon so Im happy with the 20 ltr standard tank.

It looks like you run separate fuel lines to each carb? Standard is to run through a "crossover" where thr two sides meet, it may help you to get the last drops out of your tank
B

i like synthetic gearbox oil in them. helps with the shifts noticeably ime.

Going to have to change the name of this thread. It may still be a Goose but it sure ain't ugly anymore. Great looking bike and nice pictures!

DTT BOTM WINNER
Thanks!
Here is a pic that I was playing with in a photo app - I like how it came out.

Lot's to like about this one!! Little details.....like how well the tank flows into the seat....

DTT BOTM WINNER
Any idea how to mount a bottom mount headlight? 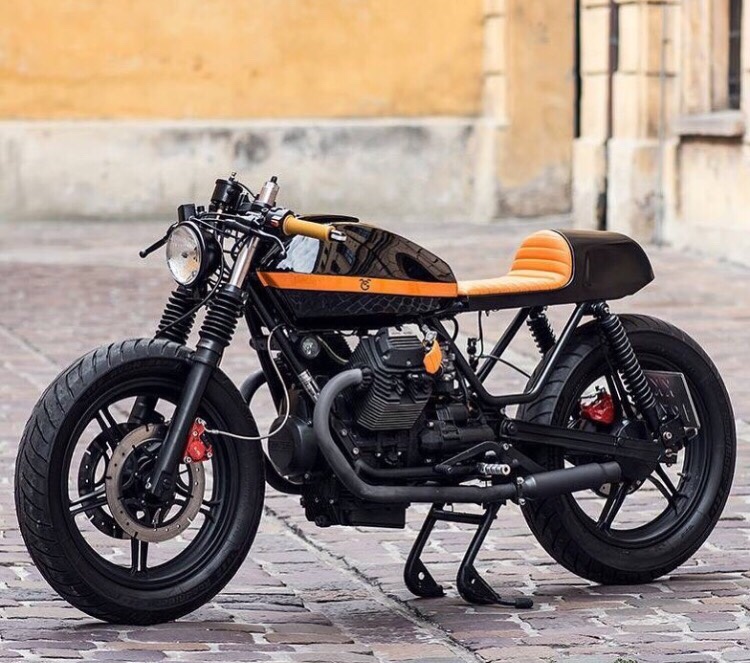 Nice and tight to the forks. It is a bottom mount. I have seen sheet metal brackets for them. Do you drill and tap the bottom triple tree? Does the bracket attach to the top or bottom of the lower triple clamp?

DTT BOTM WINNER
Got to love 77 degree temps in November.

Went out for a fun solo ride to visit Cleveland MOTO and take some more pics in the Metropark. 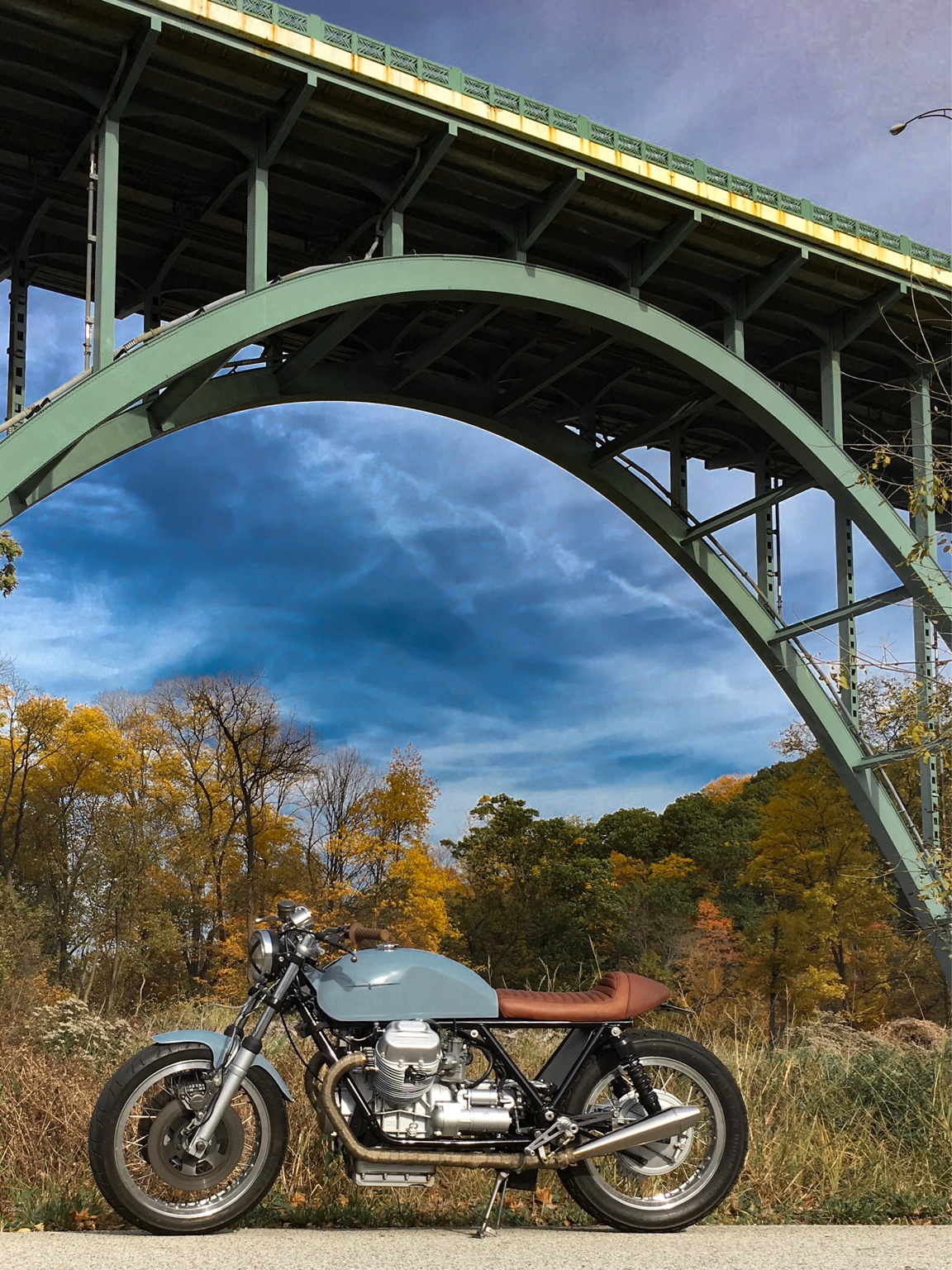 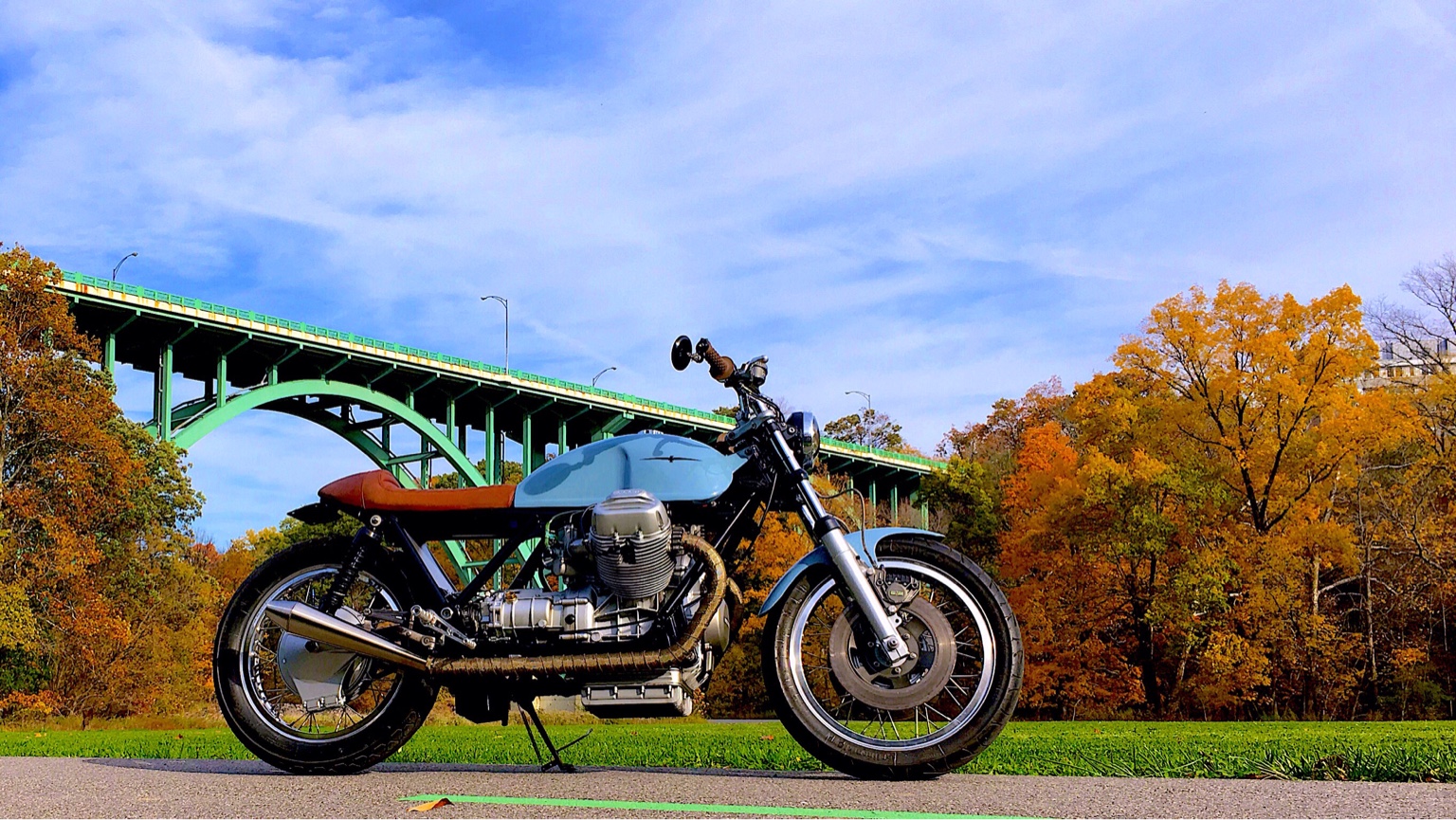 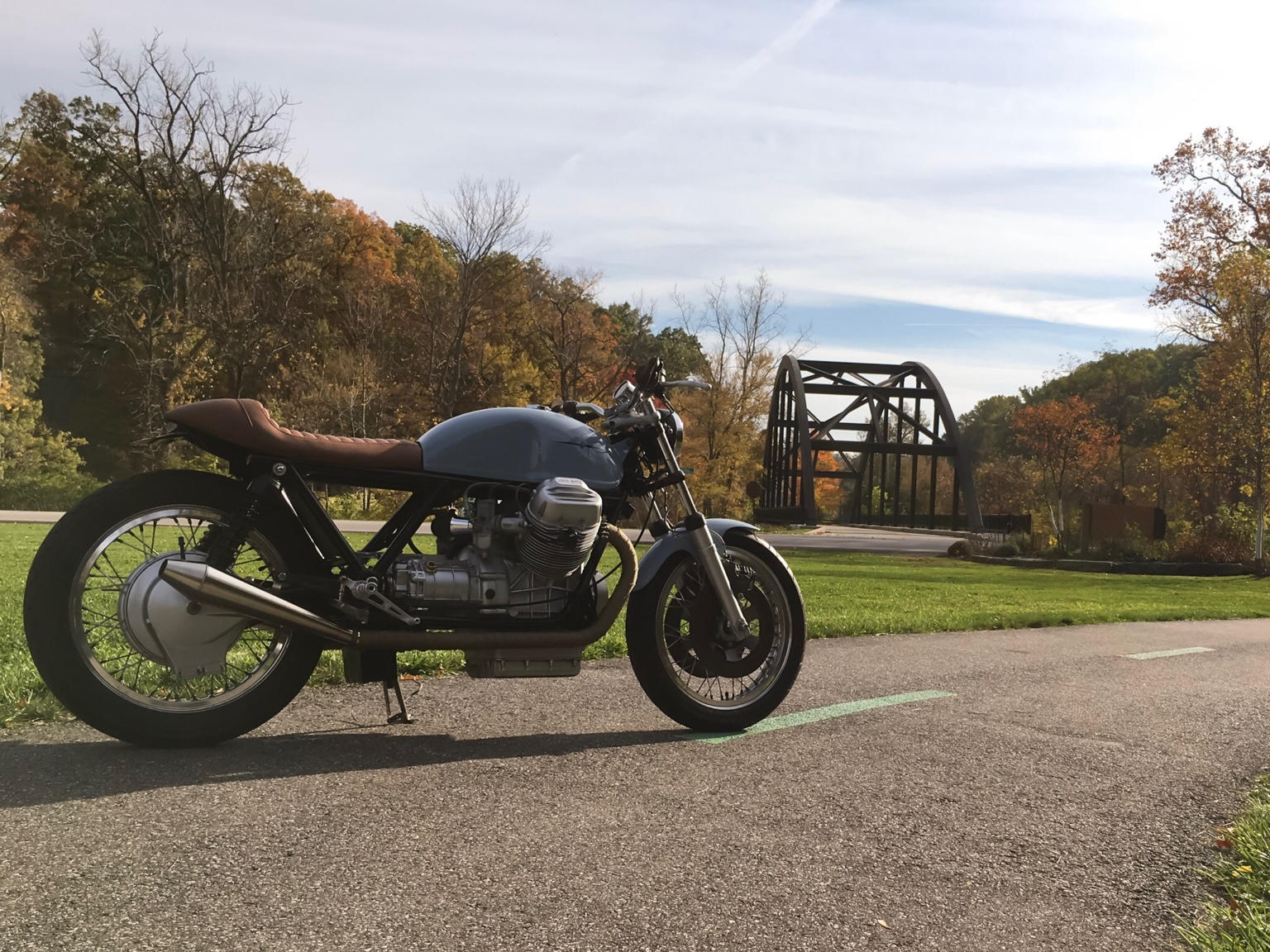 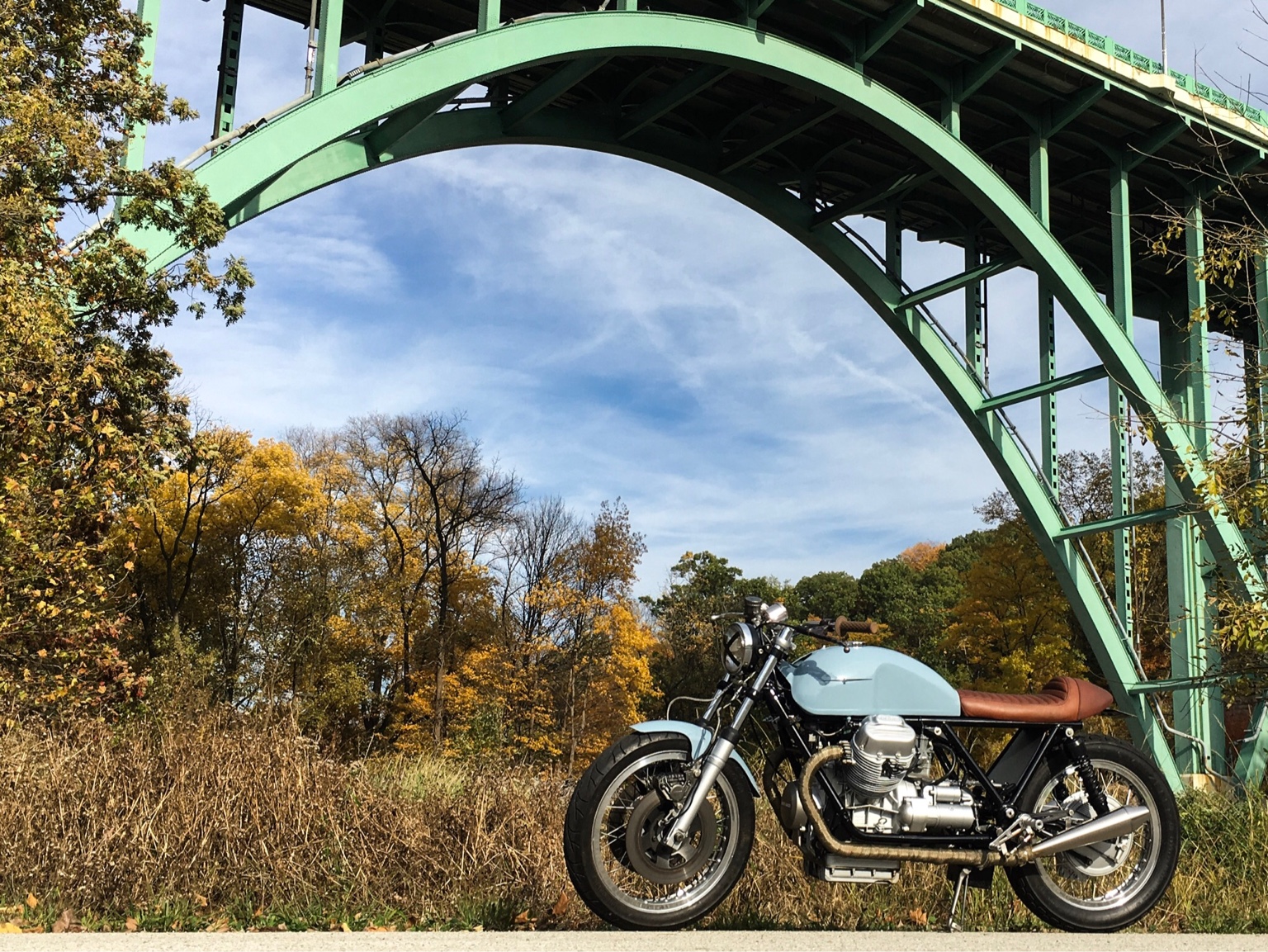 DTT BOTM WINNER
Well the Bell Bullitt in blue didn't match well. Plus it it is pricey at $399 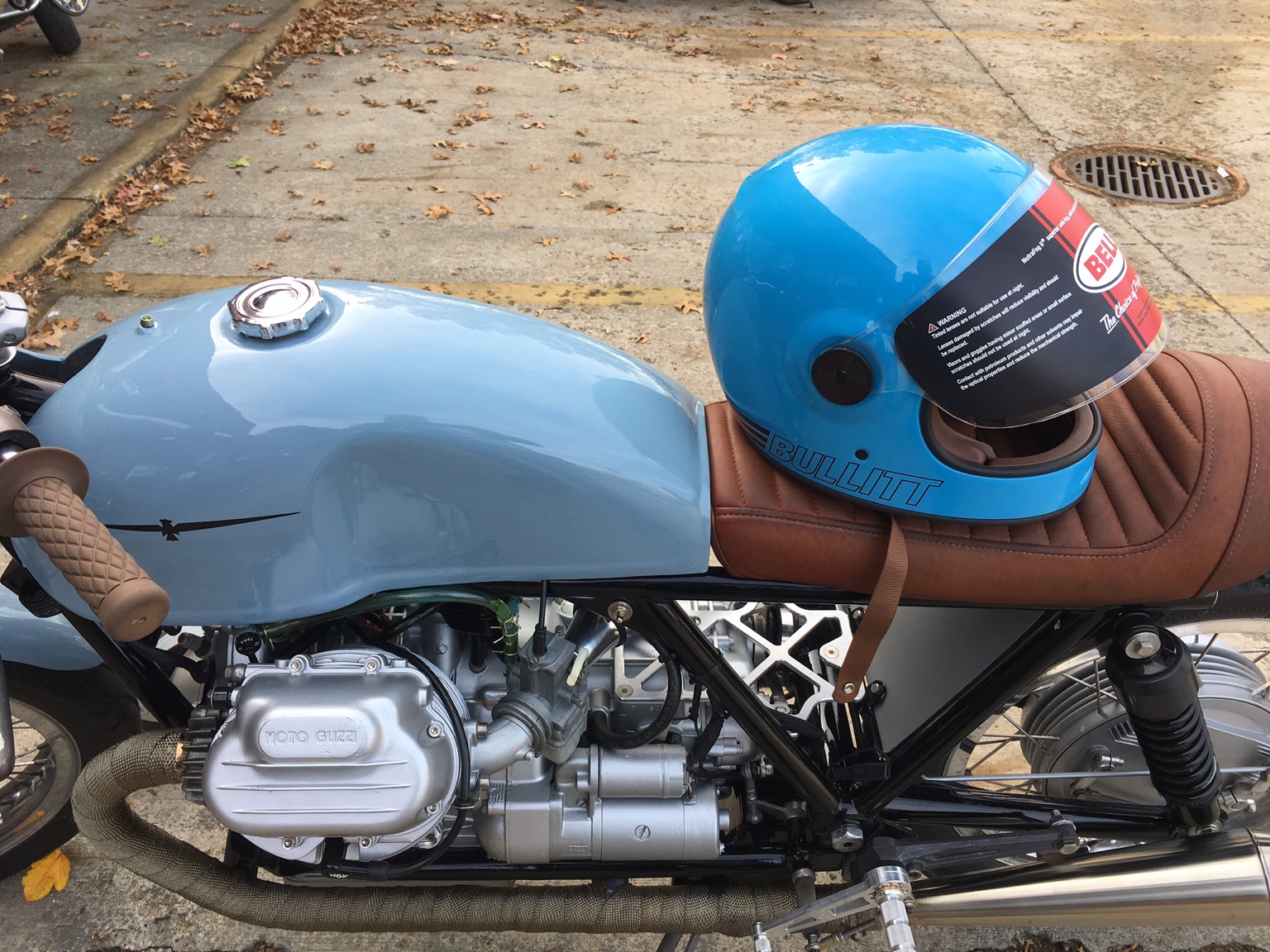 I found a used white one in my size (XXL) on Craig's in TX with some light scratches. $120 shipped!!

Works for me as I plan to paint to match my bike, I have some ideas about putting the bird logo from my tank on it as well. 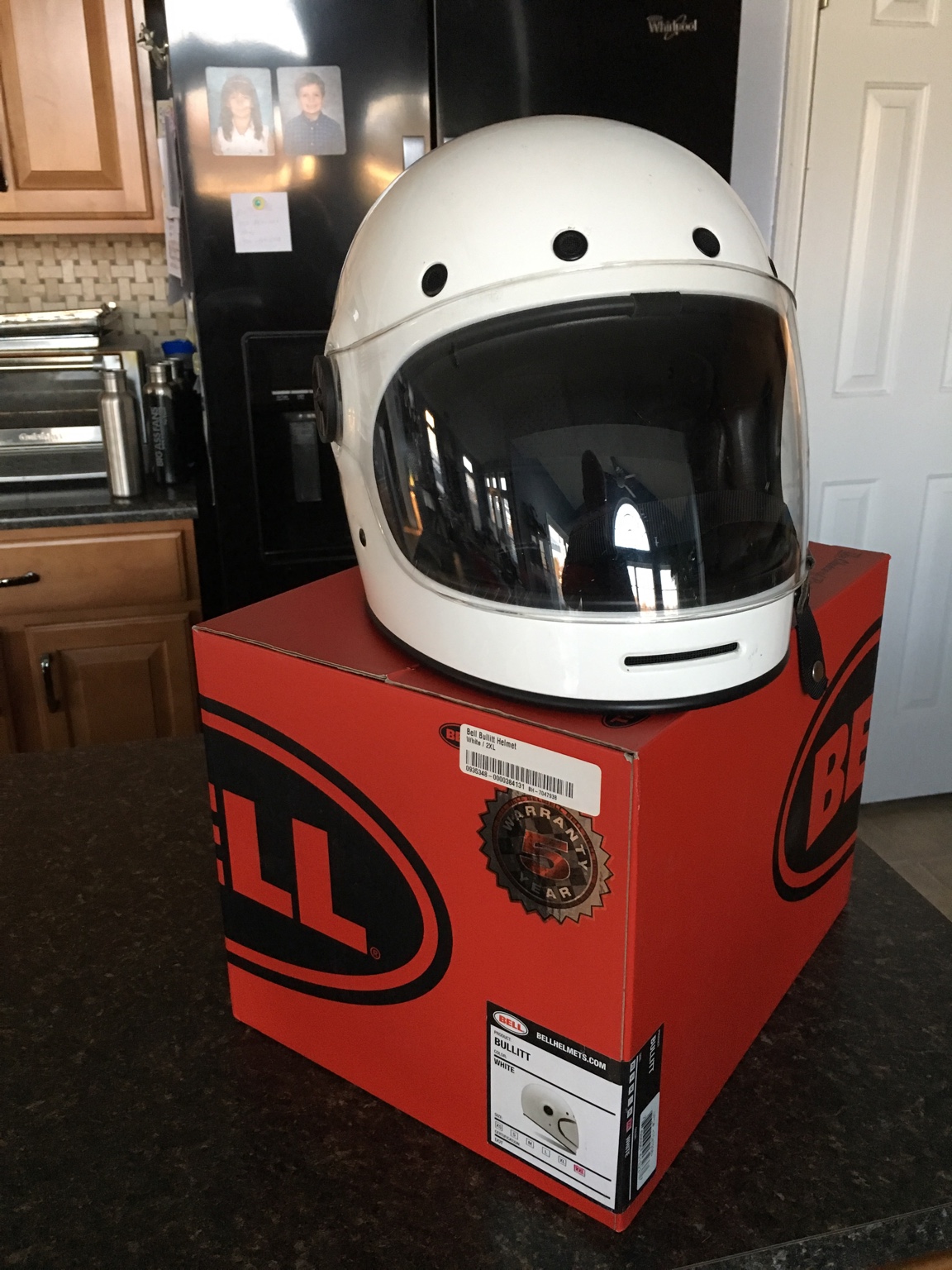