the mounting locations don't look slotted for adjustment, is it designed in and static?

Its a stock sprocket with the dampers removed ;D
Probably going to put it in mill and slot holes.
Cam timing will need adjustment because head is skimmed 0.030" which retards timing


crazypj said:
I'm thinking of building a drum front wheel off CB350/CJ360/CM400 instead of the stock disc brake.
More in keeping with 'period', home-built cafe?
Click to expand...

I did the same thing. I wanted to completely strip the handlebars of all of the crap...master cylinder included, and this accomplished just that!

Personally,
I've had more problems with drum than disc, (usually bad adjustment by owners)
Drums fade pretty bad when your 'on the gas' ( but, I managed to burn ceenters out of dual disc CB550 brake pads as well :)
I did work for Honda when the swinging arm brake was current so I know exactly how it works.
The only one that really sucks is the cable operated disc on 125~200.
One reply is all it takes, ;D
Sucks I bought new spokes for disc wheel, but, I think drum will look better so thats what its getting.

I've got a 200 I'm about to start building that has that cable operated disc on it. How bad is it? I have a spare caliper off a 350 should I just plan to use that? can I use the same disc?

I was planning on drilling the rotor anyway.

It gets better ;D
I got some Chrome levers off eBay because I was thinking about going with drum brake.
They turned up this afternoon as well 8)
Not the best quality in the world but they do have the built in brake switch and they were cheap (and they are shiny ;D) 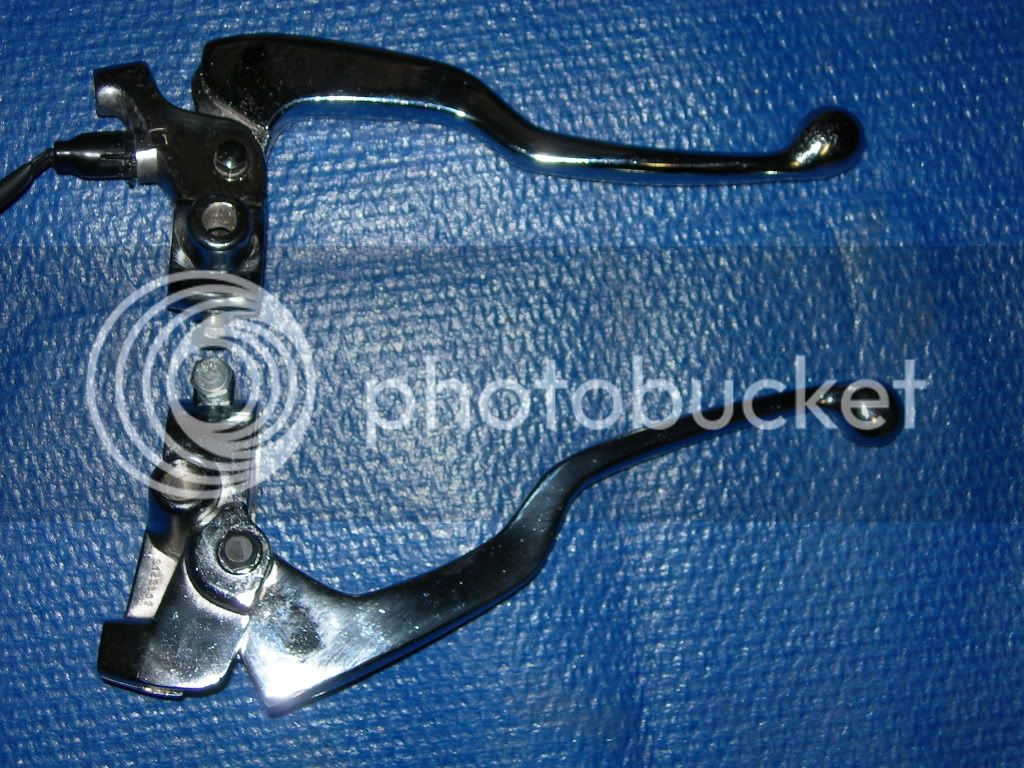 I also made some screens for brake drum holes, they are shaped to fit 'flush' with outside edge, going to makee a push piece and 'glue' them in with DEVCON as it has higher temperature rating than most epoxies, should look better than a big step you get with internal mounted ones ? 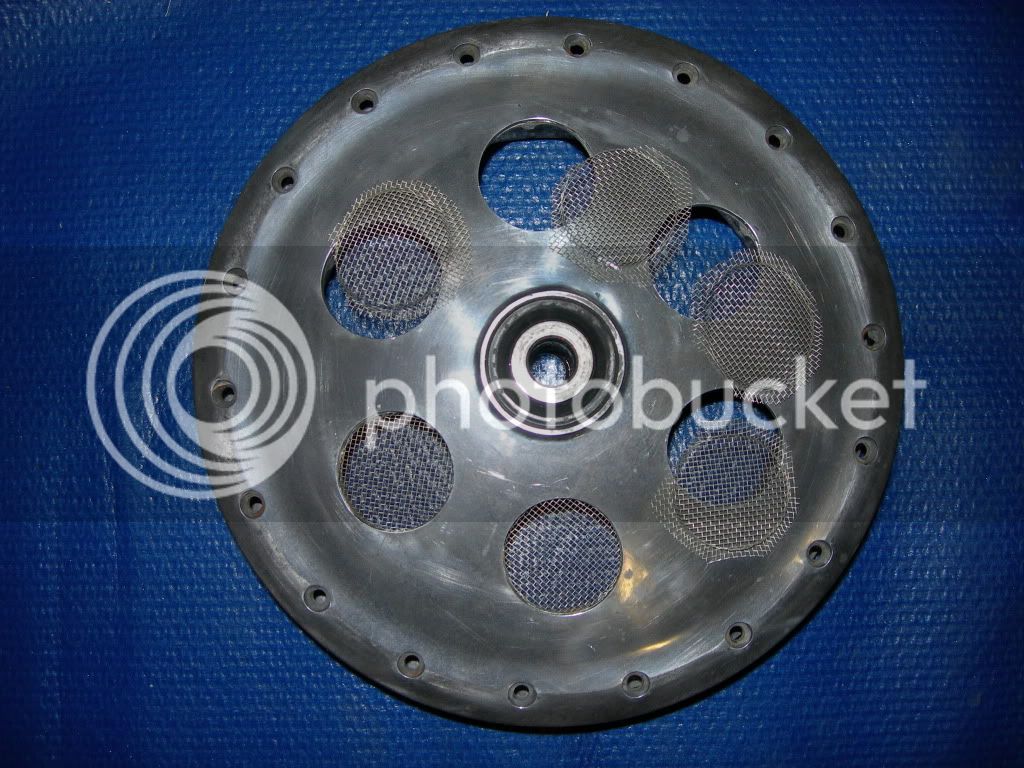 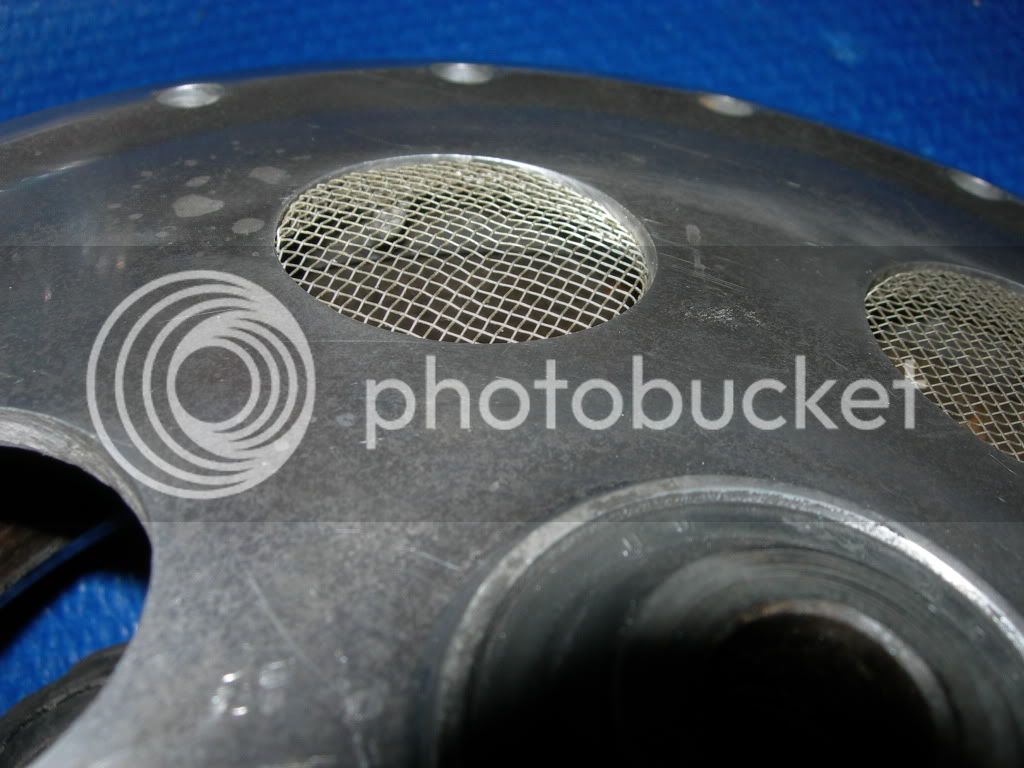 Glad to hear about that title PJ! What a relief, huh?

What are your thoughts on relining shoes for these old drums? I've used some pretty vicious stuff meant for forklifts and such. Works great but does seem to beat up the drum lining a bit.

I think Boyd's pockets were pretty deep and he was kind of a wanker....


Swagger said:
I think Boyd's pockets were pretty deep and he was kind of a wanker....
Click to expand...

Maybe, but a frind of mine knew him and said he wasnt the idiot TV made him out to be, must have paid him a lot to do the things he was doing.
Anyway,
been doing a bit (not much, but something )
Today has beeen busy
Got one XS rim cleaned up, finished with heavy 'work' just needs the polishing compound removed from between spoke head 'dimples' and any other bits where it stuck. It looks a hell of a lot shinier in 'real life' 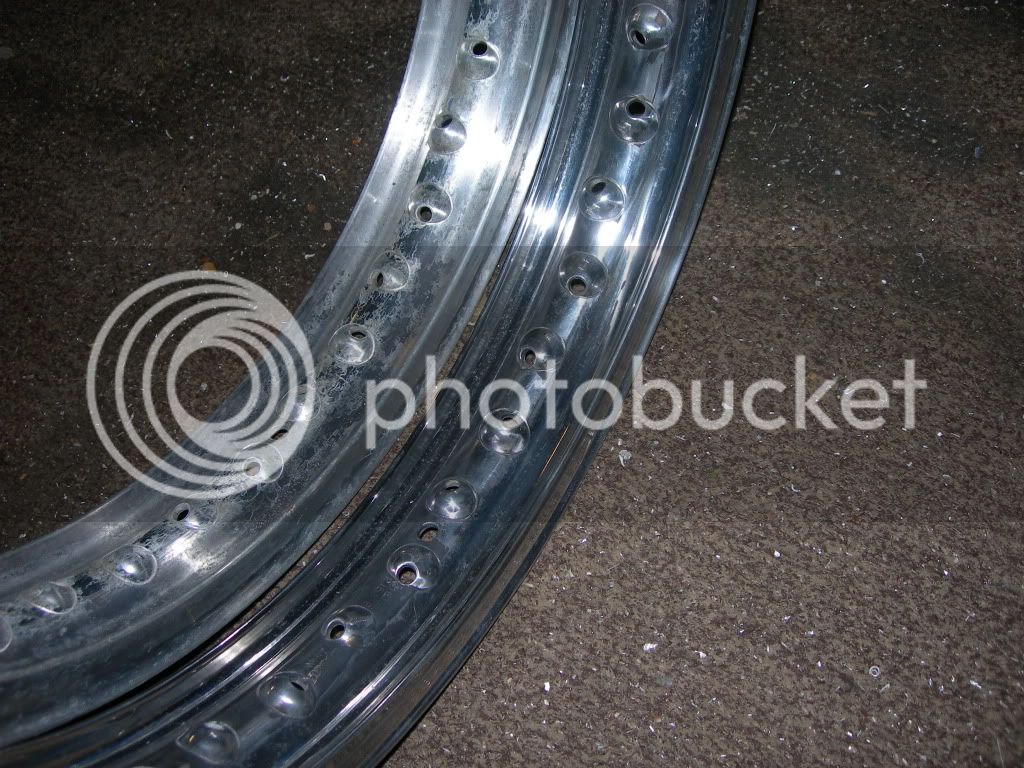 Did a LOT of work on drum brake hub.
Filed off the cross piece (don;t have a machine to do it, plus, anyone can copy this now)
Did 12 'bumps out of 16 (4 'hollows' between spoke flanges, 4 casting seperation bits)
Thought there has to be an easier way. well, there is.
DREMEL......forgot my wife bought me one about 7 yrs ago : (normally use full size die grinders)
Anyway, got ridge trimmed down then finished off with file.
Cleaned up all corrosion between spoke flanges and painted it with caliper paint.
Then.........removed paint from top of 'fins'
Heres before and after
Before (before I took wheel apart ) 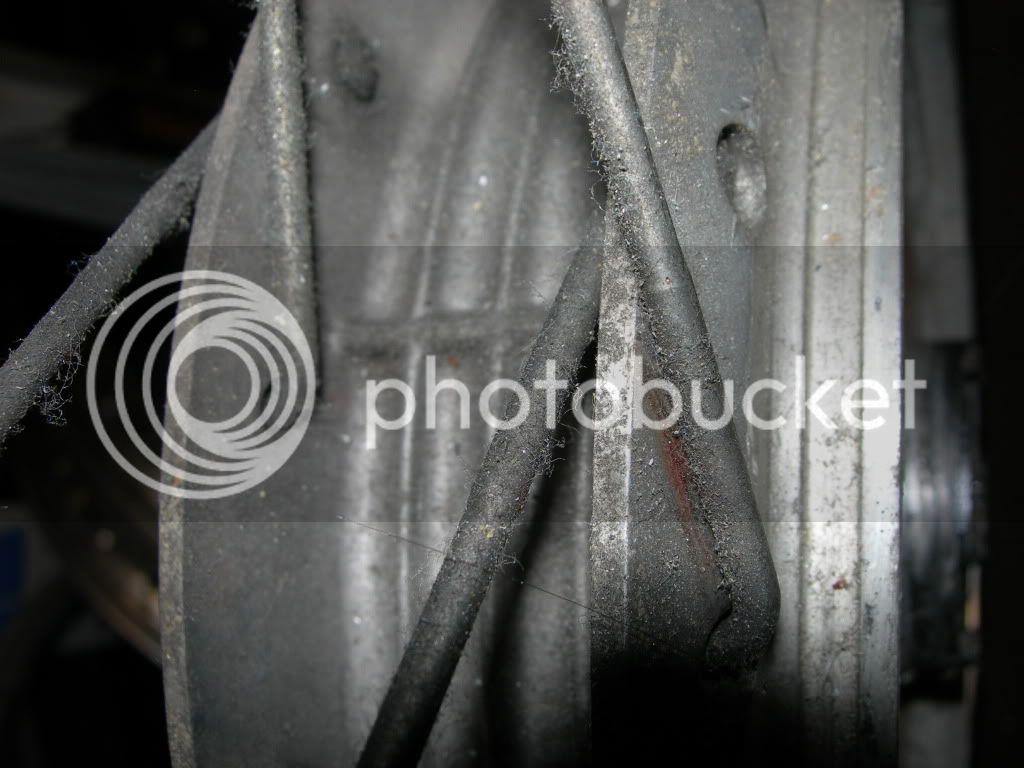 After (several hours of filing and cleaning, about 3:10pm today until 40 mins ago) 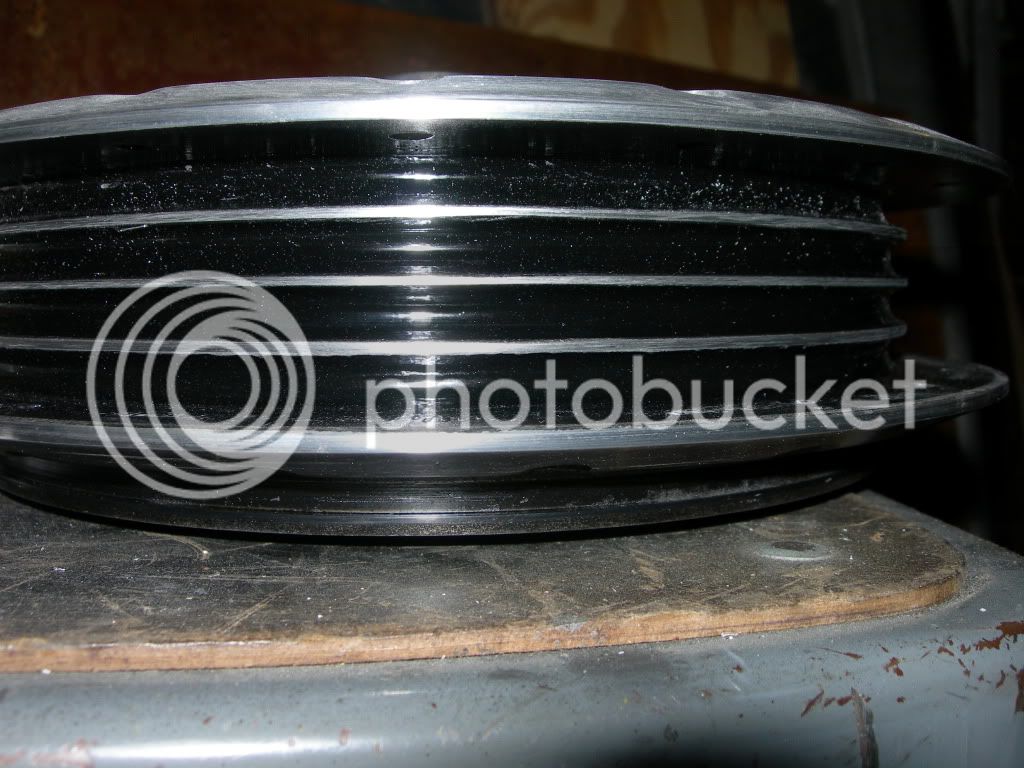 Dont mount hub into forks and spin it when painting, paint centrifuges up to top of fines and flings off making a right mess :
I also finished off the top yoke but forgot to take any pictures.

DTT SUPPORTER
DTT BOTM WINNER
Re: Yet another CB360 ( or two?)

Brake drum holes and screens are real nice PJ. I really like the work on the fins too. The wheels on this thing are gonna rock. Really nice work so far. Keep it up.

Good work PJ! I'm diggin what you did on the the fins on the hub. Might be another idea that works its way over to my project....


crazypj said:
I did work for Honda when the swinging arm brake was current so I know exactly how it works.

I don't want to hijack your thread, but I've been having lots of trouble with my swinging arm disk dragging. Can you help me, please?
email: jidleman@digitalgoose.com

Fins came out pretty nicely, but why not use a lathe? File work is no fun.

Nice work on the drums pj. A lot of work there for sure. Great attention to detail.


Swagger said:
Fins came out pretty nicely, but why not use a lathe? File work is no fun.
Click to expand...

your right about using file, but, it proves anyone can do it with a bit of time and effort. ;D
I would love to use a lathe but I dont have one that would mount a anything as big as brake drum (my little 'toy' benchtop lathe is good for valve guides and cable adjusters though )
I sold my 12" Colchester 12 yrs ago when I moved to Florida

Here's what the drum ended up like after polishing outside.
still needs going over with a rag to remove some compound.
got to 'glue' mesh in place and build wheel 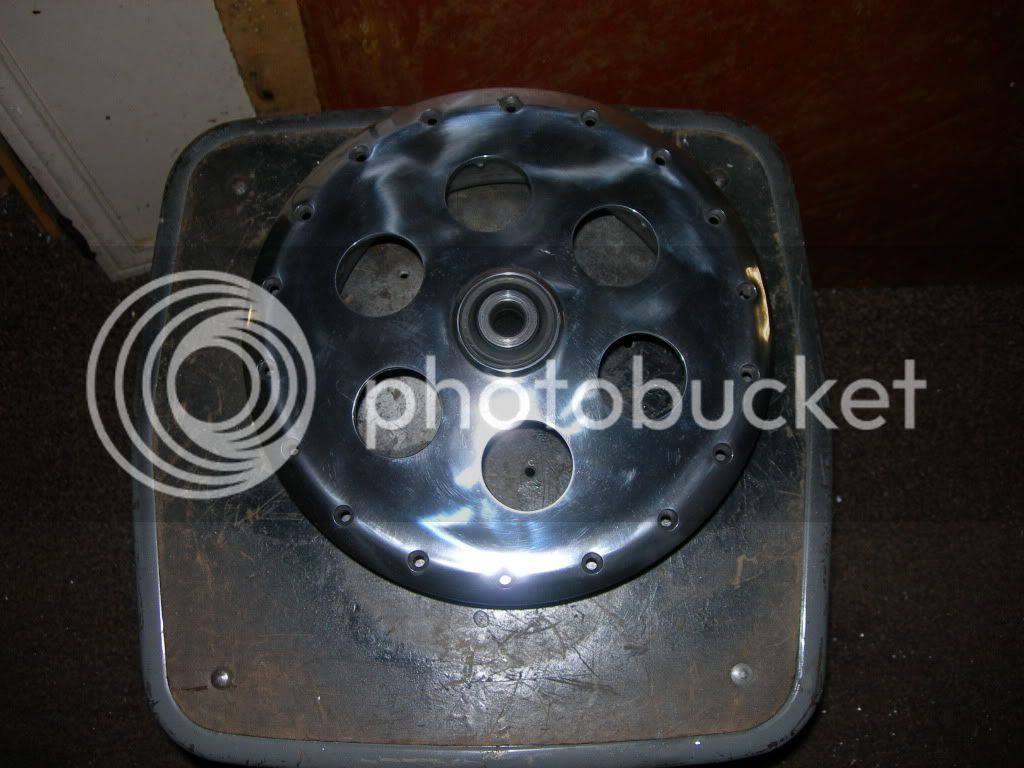 Certainly looks the business. You must be running one of the many 7-12 lathes out there? Grizzly, Harbor Freight or Jett? Before I lucked into the Leviathan I was running a Jett 9-20 that worked out ok. Not nearly enough to heavy work but most motorcycle stuff was pretty do-able.
You must log in or register to reply here.
Share:
Facebook Twitter Reddit Pinterest Tumblr WhatsApp Email Share Link