WOW, thanks.
It's still a WIP but getting closer to completed (at least for a while )

Treesus said:
A close friend of mine from Utah was doing some photography work in FL. Last night he sent me a picture of what he called "The sexiest Honda I've ever seen in my life" that he found while wandering around the Milk District.

I recognized it immediately as Brendon's 360. Funny small world.
Click to expand...

So get his permission and post a pic of it in its natural habitat ;D 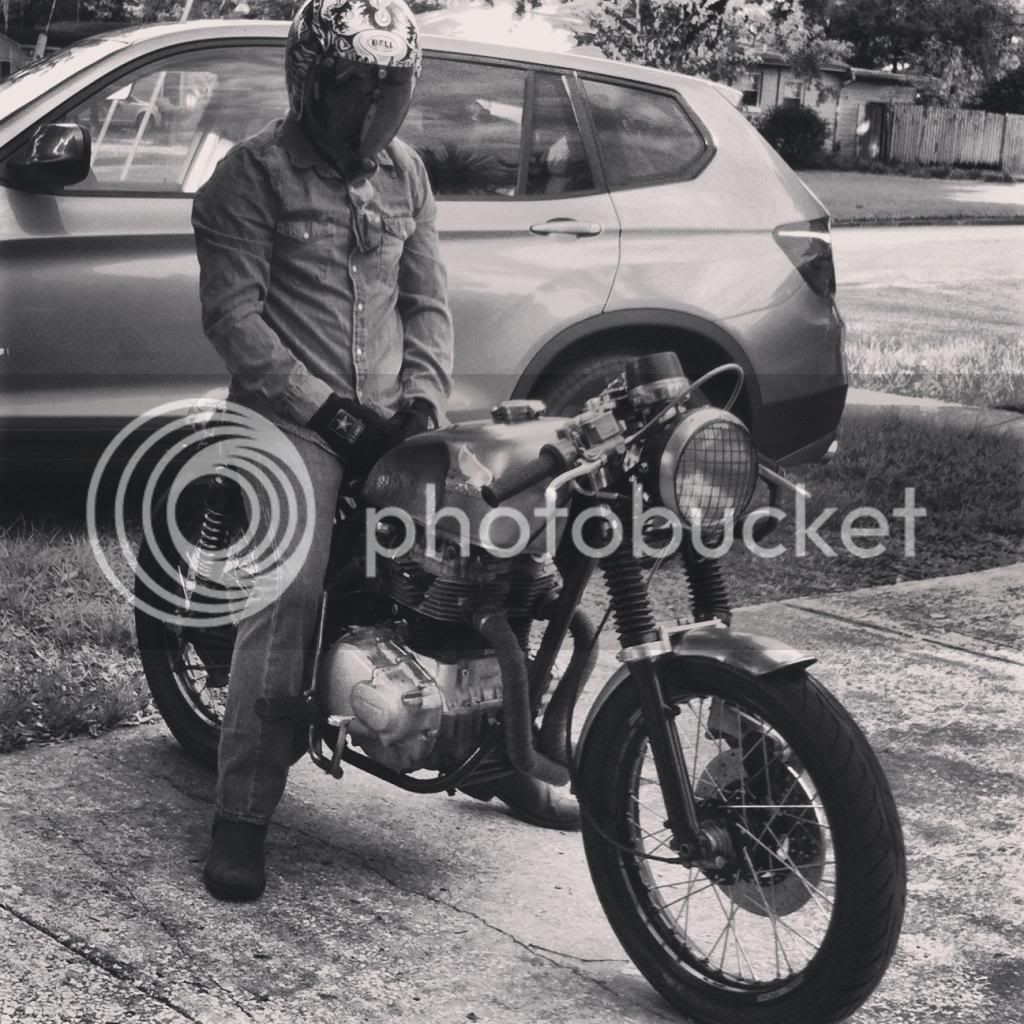 First, gear change seal popped out of housing when engine got hot which caused a pretty good oil leak.
Got back to house and fixed that plus fitted a washer with compression spring to prevent it happening again (old seals with full synthetic oil do tend to leak)
Then we found the real problem, crankcase is getting pressurised, will have to strip top end and find out whats wrong.
It isn't oil rings as there is no smoke, it's probably a compression ring or bore distorting, only way to find out is top end off

I originally posted this in different 360 thread but I've been doing a bunch of reading
I've been looking at caps for battery replacement, need the largest you can find (capacitance wise)
I just picked up two 18,000 microfarad, probably 1/3 of what I need?
Not going to have time to test anything as I've taken on too much before surgery
Something about size of Ballistic battery (made up from a set of 4 smaller caps) around 30v (it will only charge to input voltage)
It will be even lighter than battery but may not be much smaller (maybe even bigger?)
You'll have to kick over a few times to charge it up and must have lights you can switch off
needs to be around 4 amps equivalent
Basically you connect same as a battery, red to +, other terminal to ground
There really isn't much information easily available other than people trying to sell you a cap
I did find this though
http://www.ehow.com/info_8638876_difference-between-batteries-capacitors.html


360 needs roughly 4 amps for normal running so you would need around 4~6 farads or a big array of parallel connected small ones?
But, amps are not volts, generator doesn't 'load balance until around 3,000 rpm, I think amperage may be close at lower rpm?
I know there is around 1~1.5 amps 'spare' at 3~5,000rpm
Won't be doing any tests for a few months though

1 Farad is pretty big. I'm not sure you want to sit on six of these.

650 farad 2.7v supercaps are real small in comparison
When connected in series you get 16.2volts, 108 Farad, 'only' costs about $150.00 plus time and connectors, etc to put it together

I found problem with Brendon's bike.
Seems there are production variations in connecting rod length (I'm speculating but have no idea what else it could be)
'My' 378 is around 106 or 108*** engine number, his is 208*** engine number
With all the same parts as mine the piston just kissed the head, problem was, it cracked the ring land between top and middle ring plus top ring overheated and lost tension so allowed blowby to pressurise crankcase.
free end gap should be around ~9.00 mm, it was only 4.5mm
That's what happens when you assume Honda made them all the same and don't make measurements.
Anyone using GS850 pistons, use 1/16"(0.0625") head OR base gasket and 0.032" for the other

Honda sure made adjustments, even within a model year.

It is amazing that some of the pieces stayed absolutely the same. Other pieces must of changed every 3 months...

Will it fit? Definitely maybe or not!

I think Matt had same issues with SOS, and his is a CJ. Well, either that or he didn't put a spacer in at all I forget which.

DTT SUPPORTER
My issues were mainly self-inflicted. Shaved too much metal off the head. The first machinist did a hack job so I had to take it to a second one to get it right.

I'm running .032" on head and base gasket now, but I still need to check clearances. Too busy working on other things right now, though.

You have a CJ so it will be a much later motor, let us know if you have clearance issues?
I have a special fly cutter I made to enlarge combustion chamber on CJ250 when I did the 390 conversion (14mm overbore)
Problem is, I couldn't find it when I was in Britain last year
I've made a fixture to hold pistons in lathe to reduce crown height, also has the benefit of making them slightly lighter
I've just bought a pair of XS400 DOHC pistons off eBay to experiment with, won't be here until next week
Stock XS400 will give a very low compression ratio as piston has a 'flat' top and really wide top land, the dome is way too large on DOHC piston to use in CB360 without machining (I looked into this about 7 yrs ago when I did a 522cc XS'400')
The GS 850 pistons were pretty easy to come by then so I gave up on all the extra work with Yamaha pistons
As I'm having pretty major back surgery next week it will be a few months before I'll know if it works

DTT SUPPORTER
If that's the kind of work you'd be looking to do for others, please let me know. I'd like to reduce the width of my base gasket so I can get my squish back. Running .045" below deck right now.

It's probably going to be 3 months before I really know how surgery went, surgeons office just called as I have pre-op testing tomorrow
If everything is good I'll probably be scouring eBay for DOHC pistons ;D

DTT SUPPORTER
Fingers crossed for you.


Sonreir said:
Fingers crossed for you.
Click to expand...

Yeah good luck on the surgery PJ, fingers crossed it improves things greatly for you.
M

I just read through this entire build thread...fantastic work PJ. Hope your surgery goes well and I can't wait to get my 378 build off the ground!!!!

More issues, although now fixed
Brendon's bike was running either totally awesome or real crap
Kept dropping a cylinder for unknown reason then would come back on two and run fantastic. (115+)
Ended up re-wiring a CB400T rectifier/reg into circuit replacing the original separate units
Charging 13.6 volts at idle, tops out at 14.52 V
Pulled coils off this morning, found a major issue with one of them.
Something has bubbled out from the inside around the center core laminate, probably the internal insulation
I'll probably cut it up to take a look inside. 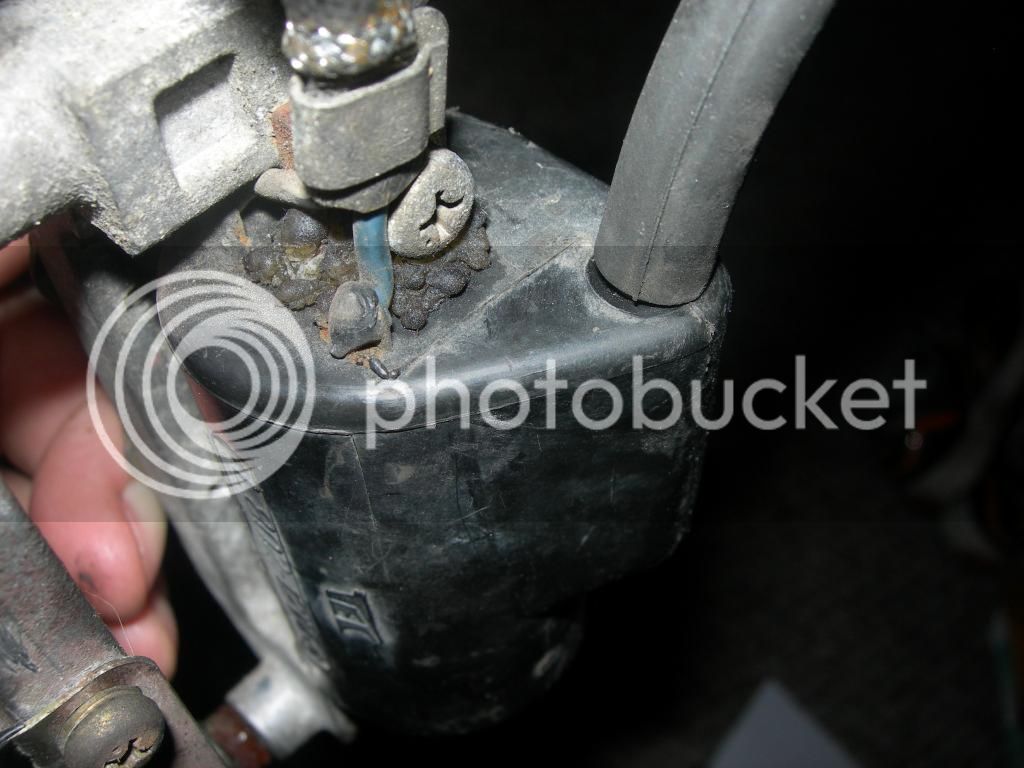 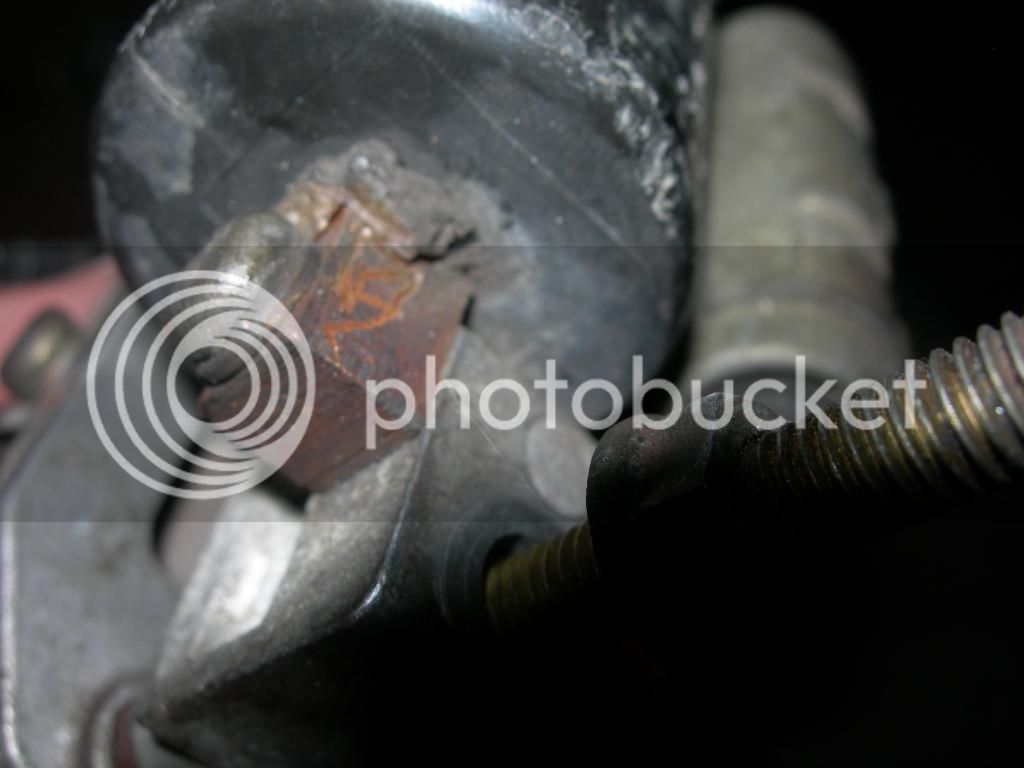 I had that exact same problem with my first car. Sure enough the coil was toast. The stuff inside it is the insulation and from what I gather it was grounding itself out before letting much of a charge through.