I'm using the original top triple, with some modifications. Before: 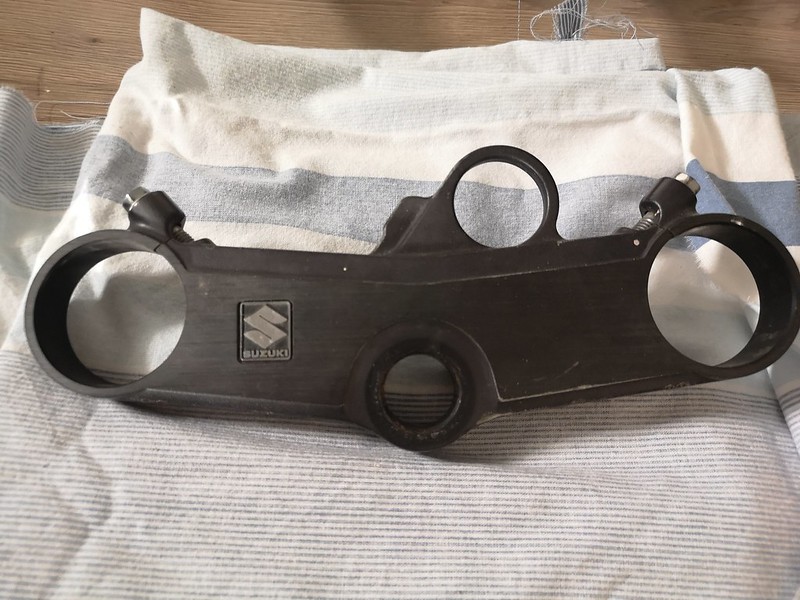 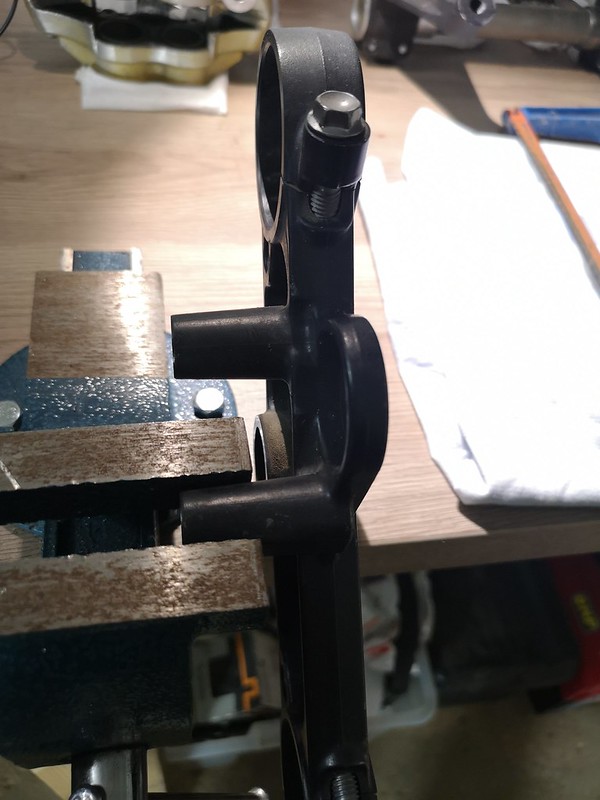 After, without ignition-tab but with gear indicator: 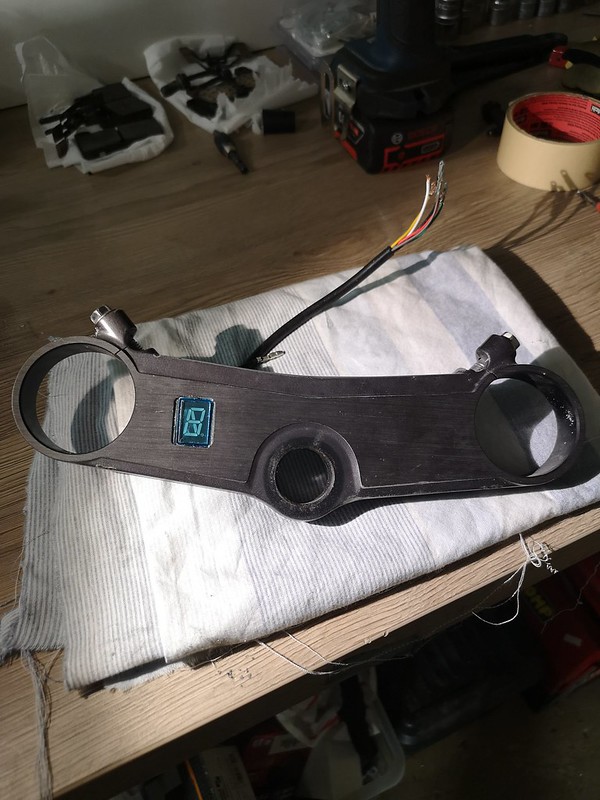 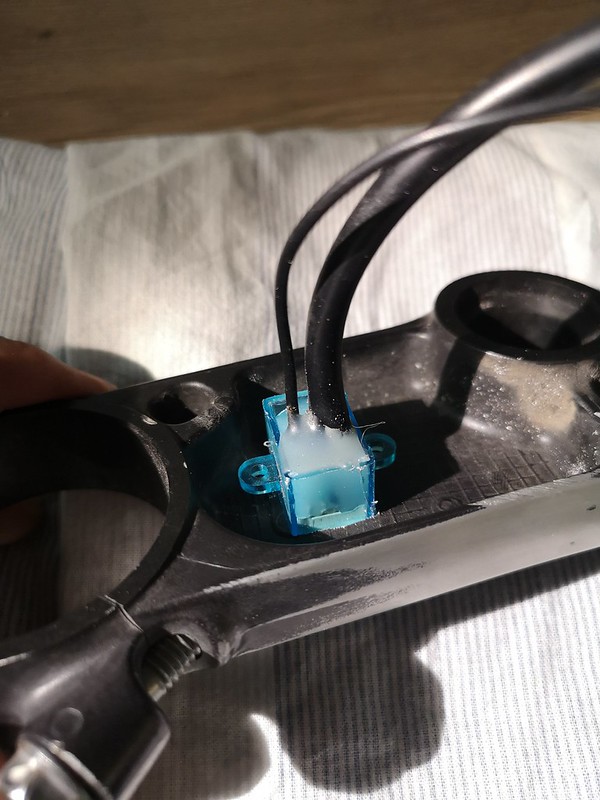 The plan is to powdercoat the triple and glue the indicator in place. Then I'll drill holes for the instrument lights, lik this: 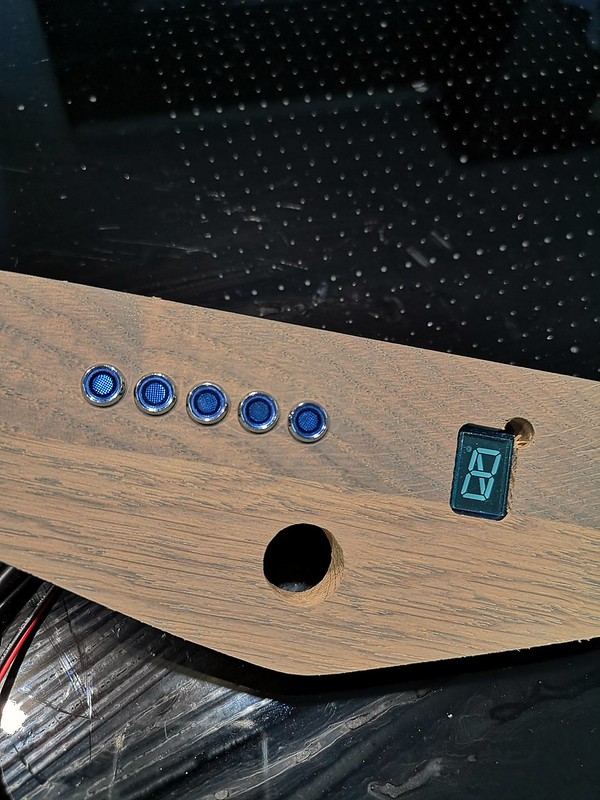 Today I put together the fork to see what it's like. Seems pretty short without the weel, but I like the look. I'm putting on some shorter mounts for the headlight to get rid of the gap when looking at it from the side. 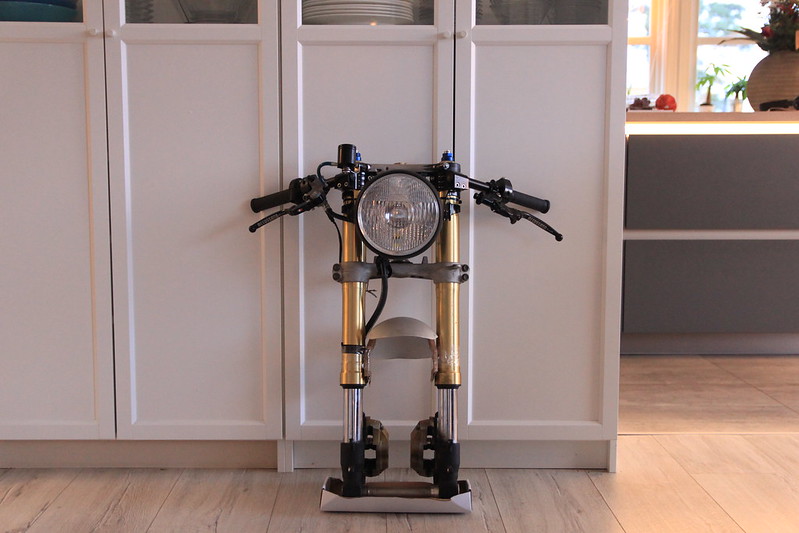 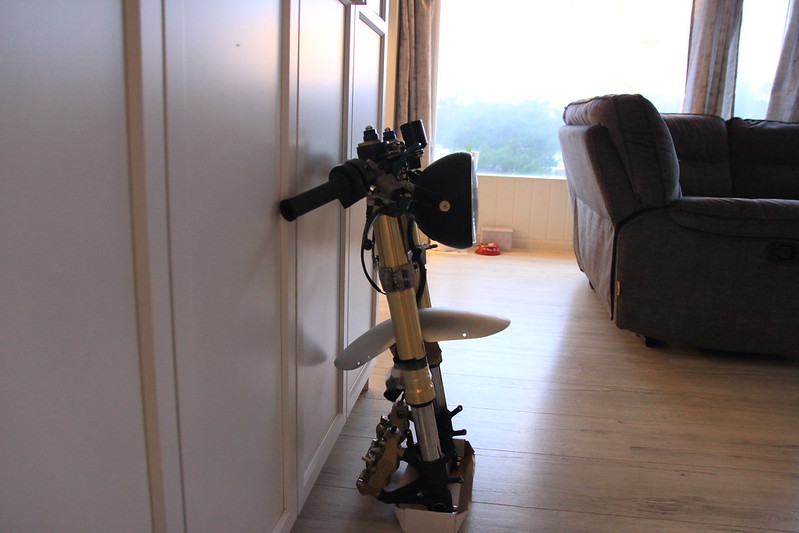 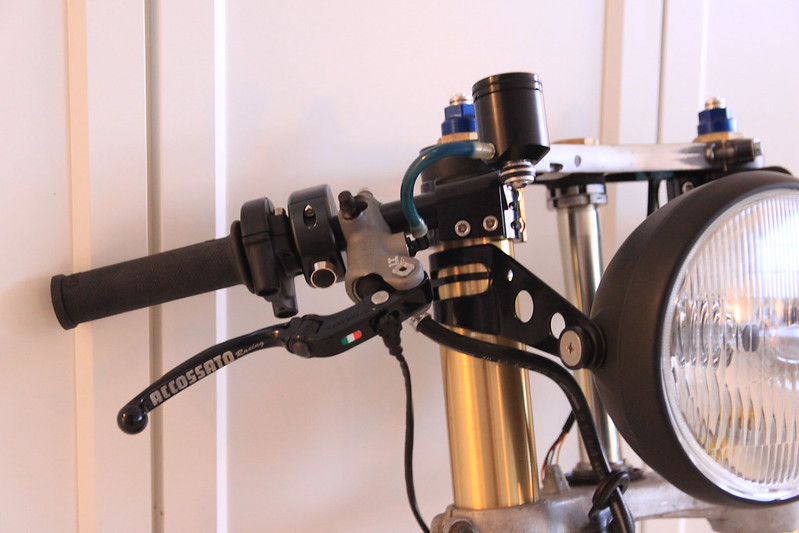 DTT BOTM WINNER
Nice looking forks. what is the measurement from center of the axle to top (or bottom) of the upper triple clamp and what is that same measurement on the stock forks?

And what is the overall diameter of the wheel and tire you plan on using and same dimension for the stock wheel?

It's important to NOT drop the front end too far and run out of cornering clearance or rake and trail (stability).
L

As you can see in the previous post I've used some high level CAD (Cardboard Aided Design) to visualize the placement of the fender. The fender is an aftermarket fender for the ducati Monster, and originally looks like this: 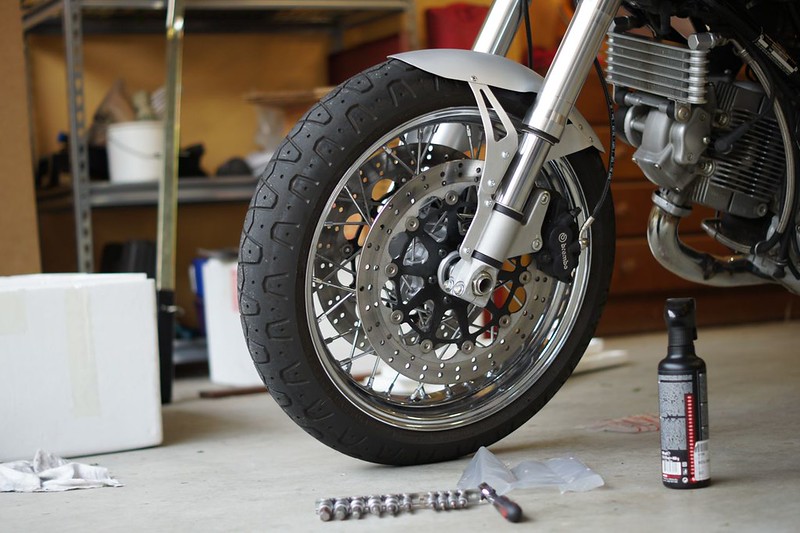 Since I'm using the 19" wheel (and because I think the original design looks backwards), I'm going for somthing like this: 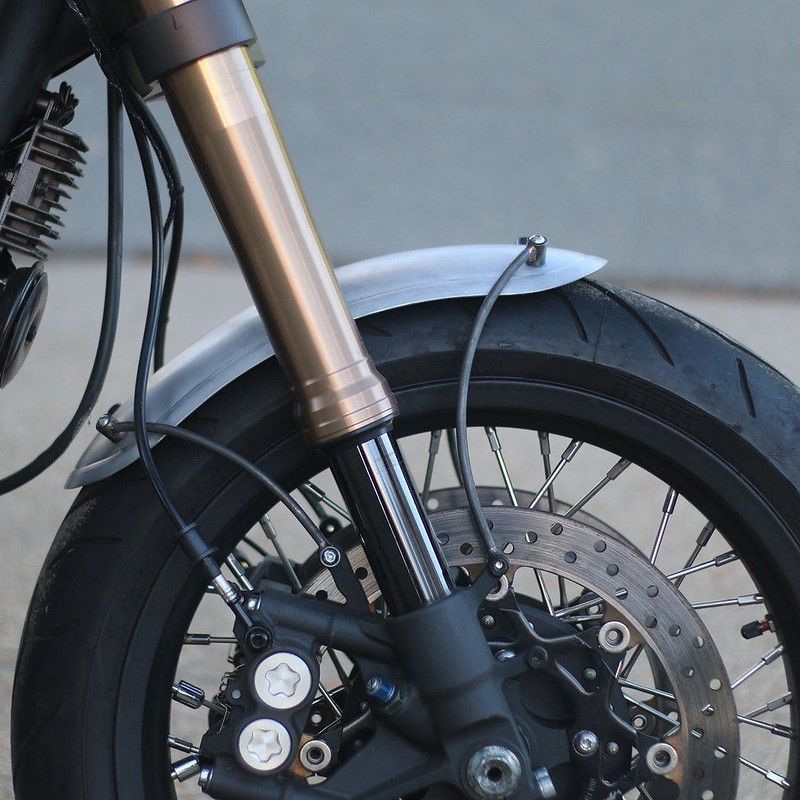 teazer said:
Nice looking forks. what is the measurement from center of the axle to top (or bottom) of the upper triple clamp and what is that same measurement on the stock forks?

And what is the overall diameter of the wheel and tire you plan on using and same dimension for the stock wheel?

It's important to NOT drop the front end too far and run out of cornering clearance or rake and trail (stability).
Click to expand...

I dont't have the exact measurements, but if you look at the black tape on the one fork; the new tyre stops at the top of the tape. The forks have 120mm of total travel, but you use probably 80mm so theres lots of room. The triple offset is about the same, but you loose about 25mm of offset from switching away from leading axle. This adds to the trail, but some of this is lost because of steeper steering head angle. If I still have too much trail, I'll see if i can compensate by rasing the rear.
L

I don't know if this makes sense to you, but I wanted to see if I could fit the Motoscope mini into the GSXR-triple. When I bought the Mini, the plan was to use the original front. Then the new triple would have looked like this: 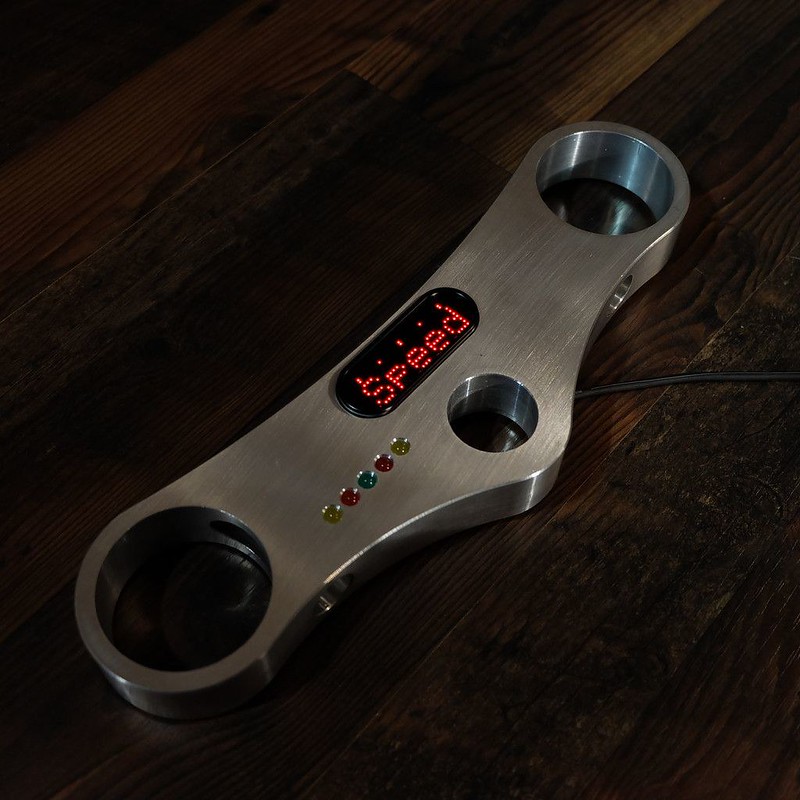 There isn't room to place the Mini in the center of the Gixxer triple, but there is room for it on the opposite side from the gear indicator. I've cut a piece of paper the same size as the Mini, put it on the backside of the triple to position it between the support ridges. Then I've flipped the picture and layered it with opacity on top of the other picture.. Like this: 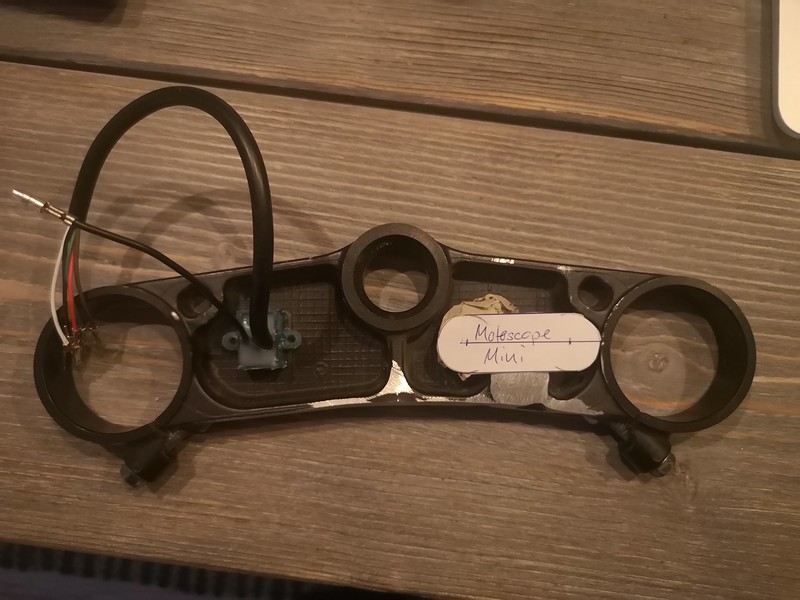 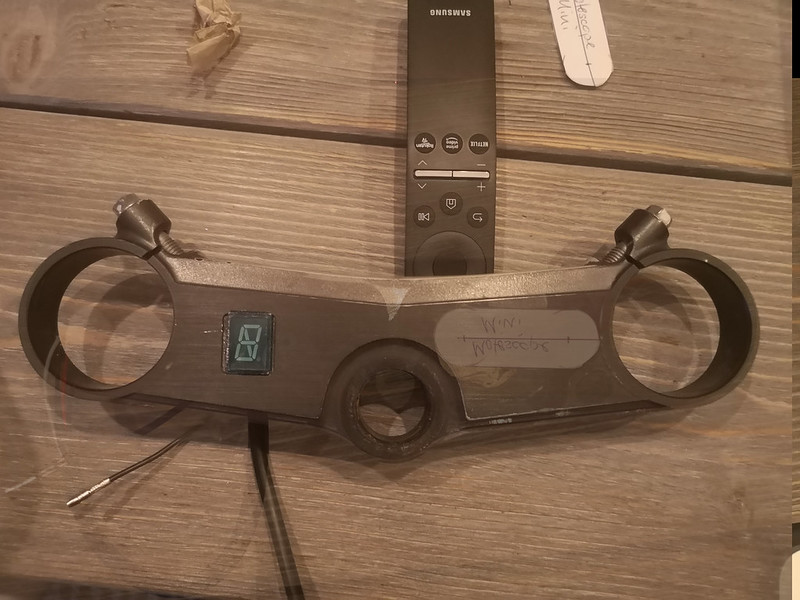 It doesn't look as cool as when it's mounted in the center, but until I have access to a cnc router again it must be good enough..
I think it would look better with the instrument lights under the Mini.
Not sure of how I want to do this, so I'm open for suggestions

DTT SUPPORTER
Looks like there's enough room in the centre, no?

It’s a difficult one as you don’t want to cut out any of the supporting pieces.

Did a quick photoshop of what the triple would look like with the Mini and lights. I first did some sanding on the triple to brake up the shapes and to match the "design" with the tank and tail. I think I'll go with this. 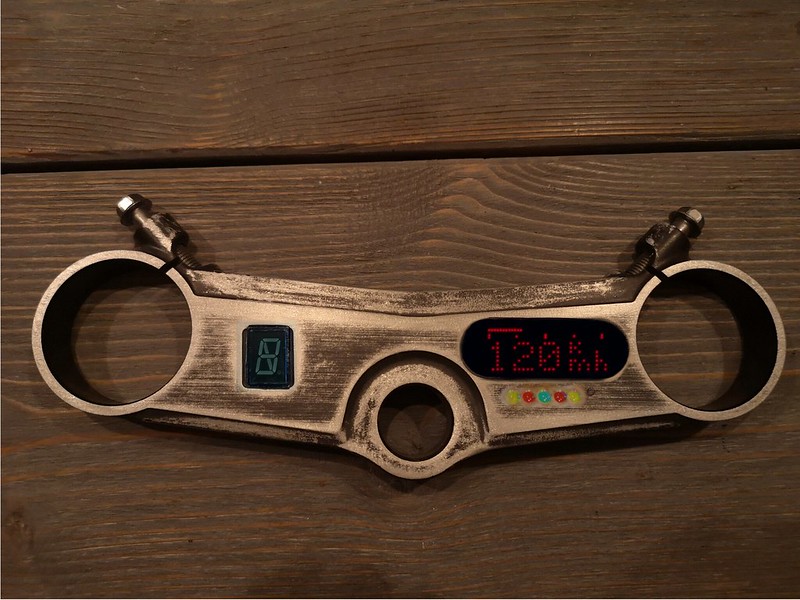 Thanks for the feedback! I'll go this route then
L

Thought the Cognito Moto design of the indocator lights were much prettier than the big lights I used the last time. Drilled holes for 3mm 3V Leds, countersunk the holes 2mm and tested. Pretty satisfied. I did a test at a spot where I'm gonna remove material for the Mini anyway, just in case, but as I'm going with the design I'll position the holes below the Mini. Like in the picture I photoshopped. Here's a video I did to show the visibility of the LED (and some cheesy mobile editing )

This is looking sweet as

Well.. stuff always seem to happen. My father in law bought a Creality Ender 3 Pro 3D printer a while ago. He was the one who printed the "speedo converter" I designed: 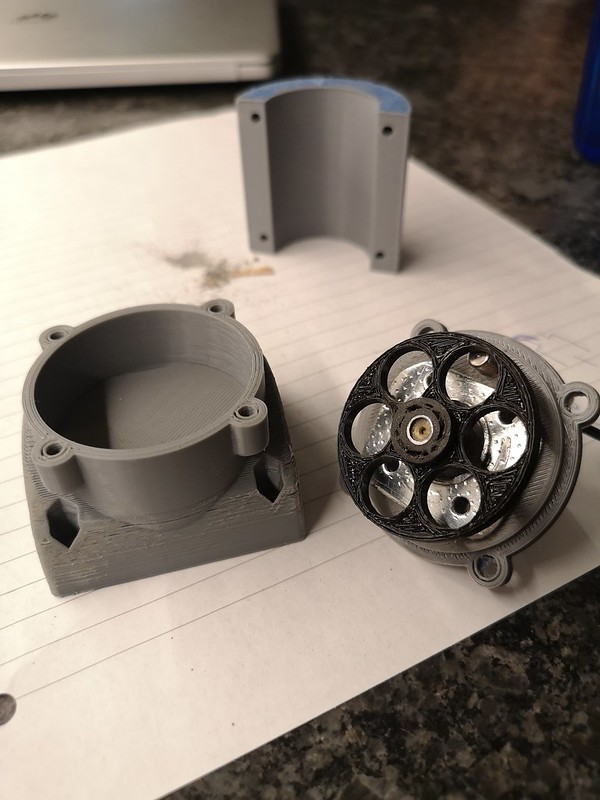 I ended up with another solution, but at least I now know I have the skills to design parts that are printable

A couple of weeks ago, he handed med the 3D printer. It had become an object of annoyance to him, as he never got it to work well. He recently moved into a new house, and had decided he didn't want to use any more time on it. It is now mine, if i print some parts for him now and then. I've gotten the printer to print perfectly now (took some work), and it's an awesome tool to have at my disposal. But what do you do when you have a machine that can make parts of alomst any shape? You make another cool machine

Looking for solutions, he upgraded the controlboard, and he gave me the old board with the printer. I bought 5 used stepper motors for 20$, and the rest of the parts on Ebay for about 120$. If everything goes well, I'll have a CNC-router capable of milling aluminum at the cost of about 150$ As I have access to a lathe at my dads, the ability to make cool parts for my bike should now only be limited to my own CAD-capabilities

Heres a picture of the printer: 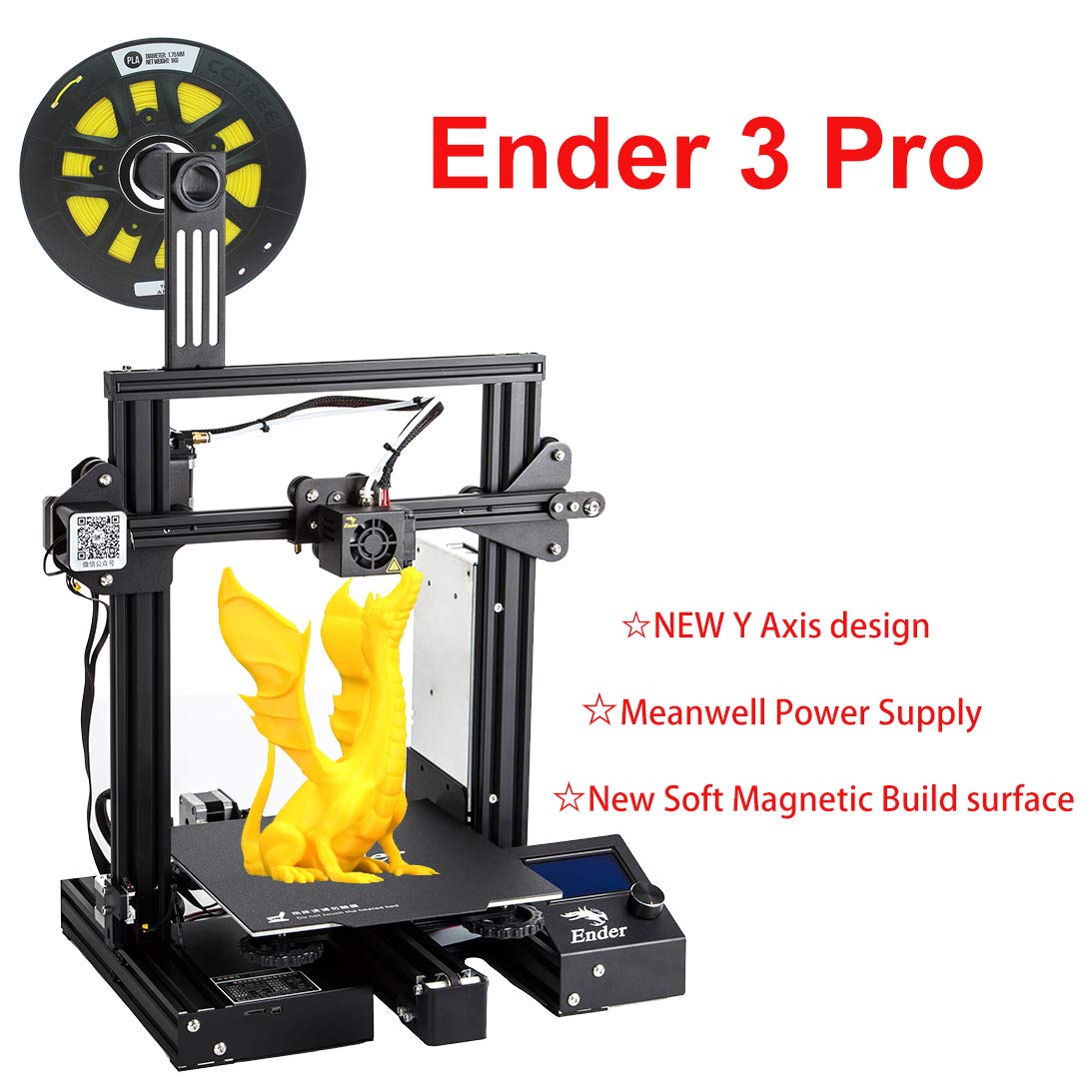 Here's a picture of the parts I'm printing: 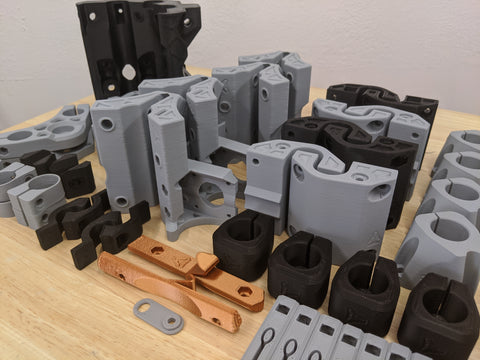 And here's a picture of what the router will look like. Most People in the US use Makita or DeWalt, but I'll print a tool holder for the blue Bosch grinder I already own. It's the same power as the Makita, 27k rpm and variable speed. Should mill alu with no problem;

I'm really exited to add these parts to my shop, and I thought it would be cool to post about it. I'll make som updates on the bike soon

Then printed it. The print quality is awful, because of low quality setting and bad preparations. Just wanted to test if the measurements are right. I also wanted to test using supprts for the horisontal "roof". That worked flawlessly, and the supports are easy to pull away from the model: 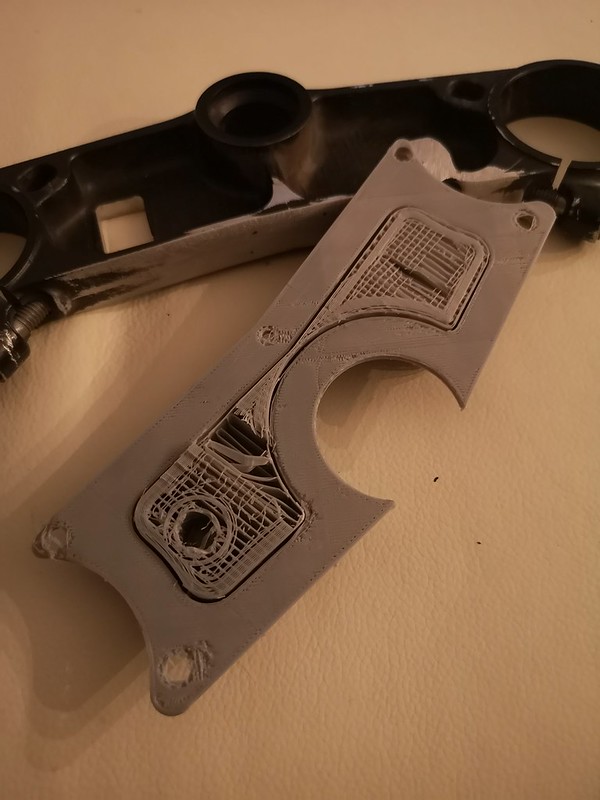 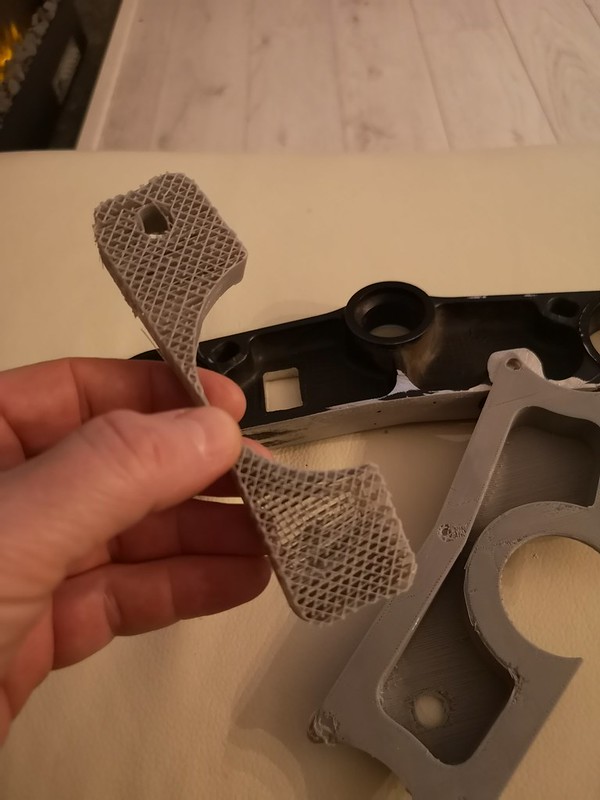 
The part is a housing for the underside of the top triple. It will hide the wires and protect the backside of the Motoscope mini and gear indicator. 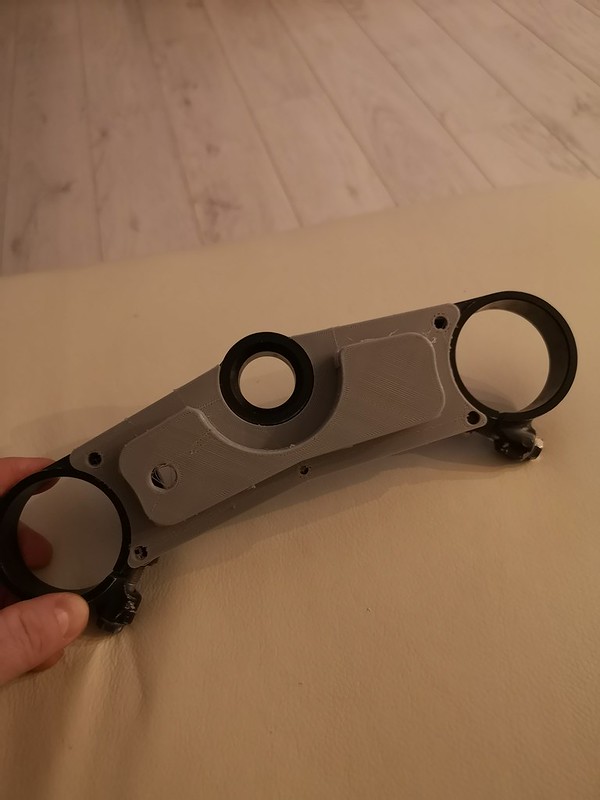 I'll have to make it a cpuple of mm smaller. I didn't take into account that the edges taper about a mm. Aside from that, I'm pretty satisfied. I wont do another print before the fork is on the bike, in case I'll have to do other modifications. 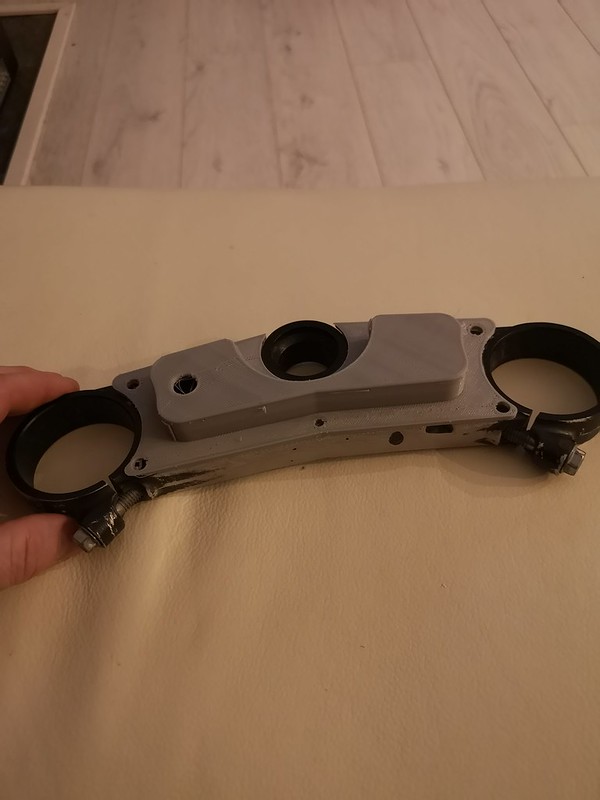 I'm looking to replace the switchgear. I need 3 buttons (non-latching push-buttons) on each side.
The setup I currently have looks like this: 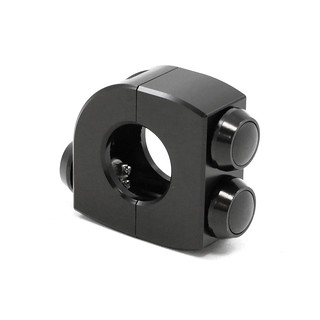 I don't like the ergonomics at all.. especially the button on the back is a pain to reach with gloves.
I know they have another version that looks like this: 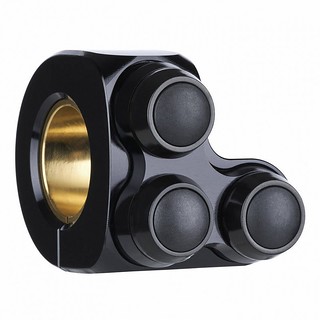 and I've seen other manufacturers do something similar: 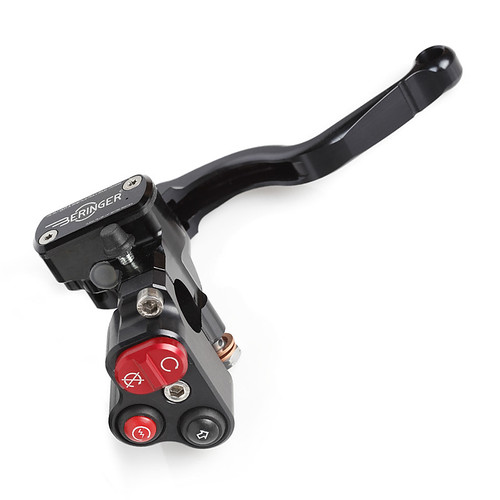 Of those two, I think the last option is the best.

I'll be designing my own set of switches (first by 3D print, then cnc-milled aluminium) and I've been looking at Superbike-style switches. They seem to be disigned around the "swiping radius" of the thumb for better ergonomics, and I think they look pretty cool: 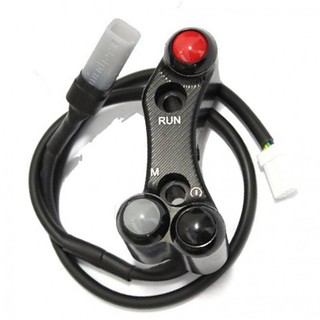 What do you think? Does anyone have a link to something cool that also works well?