You can always get it running with time or money.

No wonder the 360s love the synthetic oil so much. I was worried my timing was advanced from the amount of heat the 360 was kicking out.

I didn't have any luck finding a Dynatech or other electronic ignition setup anyway. One guy had a 10+ year old unit "new in the box" that he would "let" me have for $250 : At least I picked up a turn signal / license plate bracket for the CBR900.

Fitting 100w headlight to Katana, thought I'd be 'clever' and wire clutch safety switch through relay so headlight goes out when clutch pulled and button pressed
Well, that didn't work (without fitting a relay to power relay to work high/low : )
Back hurting today, need to find my painkillers

Finally got Katana running, pissed petrol everywhere, pinhole in fuel line
It's molded 90 degree, I made a union to fit tap and used the old fitting soldered in to make a 90. ;D
Trying an experiment, (worthy of Ichiban )
Had some heat barrier but not enough to do all of tank bottom, so, aluminium foil tape for AC got used.
No idea if it will help keep fuel cooler or if it will fall off tank base when hot? (I did spend some time de-greasing base of tank) 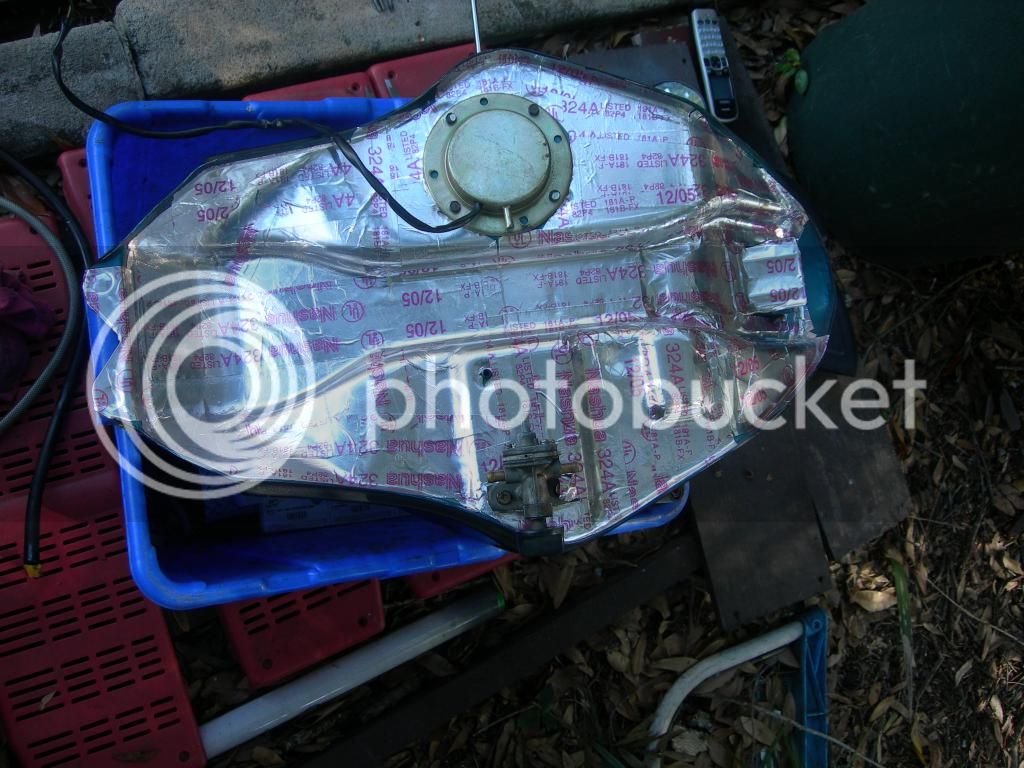 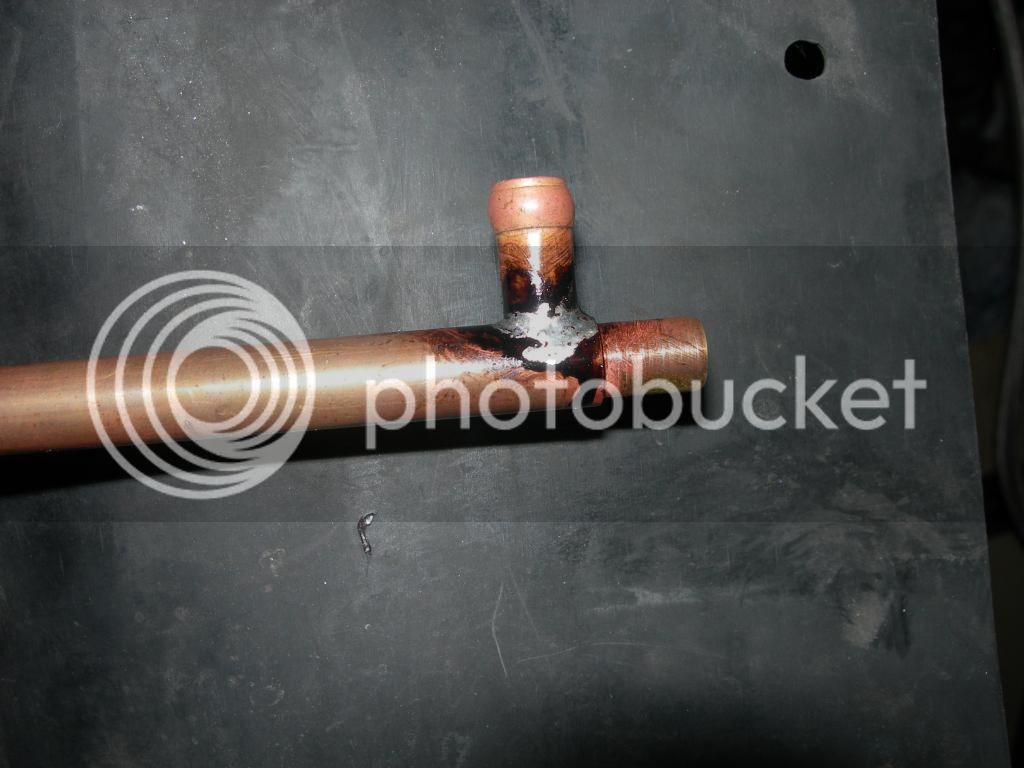 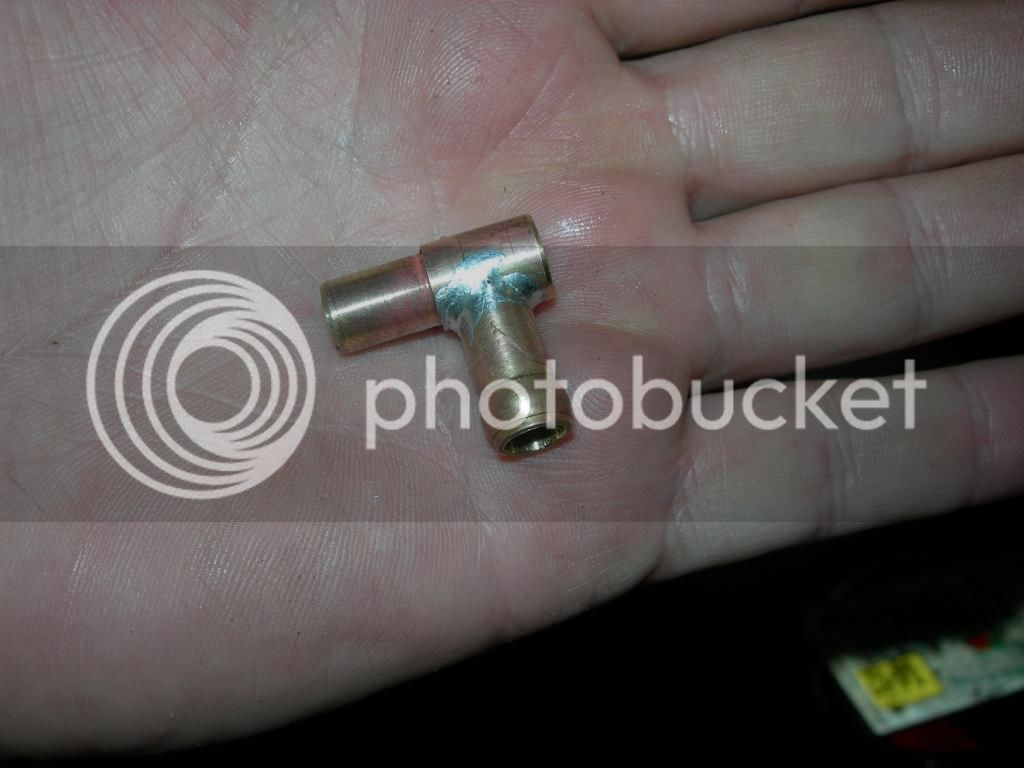 It kept me busy and amused for the day ;D

The glue on that true "Duct" tape is unbelievable.

It should hold up to the temps just fine.

I hope you never want to get that stuff off the tank.

That's good to know, didn't seem so great for duct repair, probably didn't get all the dust off.
I cleaned and de-greased tank so hopefully it will 'never' move 8)
Bike seems to be running fine considering it hasn't been ridden for over a year, guess starting it up every couple of weeks helped prevent carbs s gumming up.
Damn elbow is hurting where surgery was performed, worse than hand (that's only tingling. same as 3+ yrs ago)
Only did 10 miles to bike 'club' and 10 miles home, back not too bad last night but not so good today. May be a long time before I can ride any decent distance (100+ mile club run, etc) 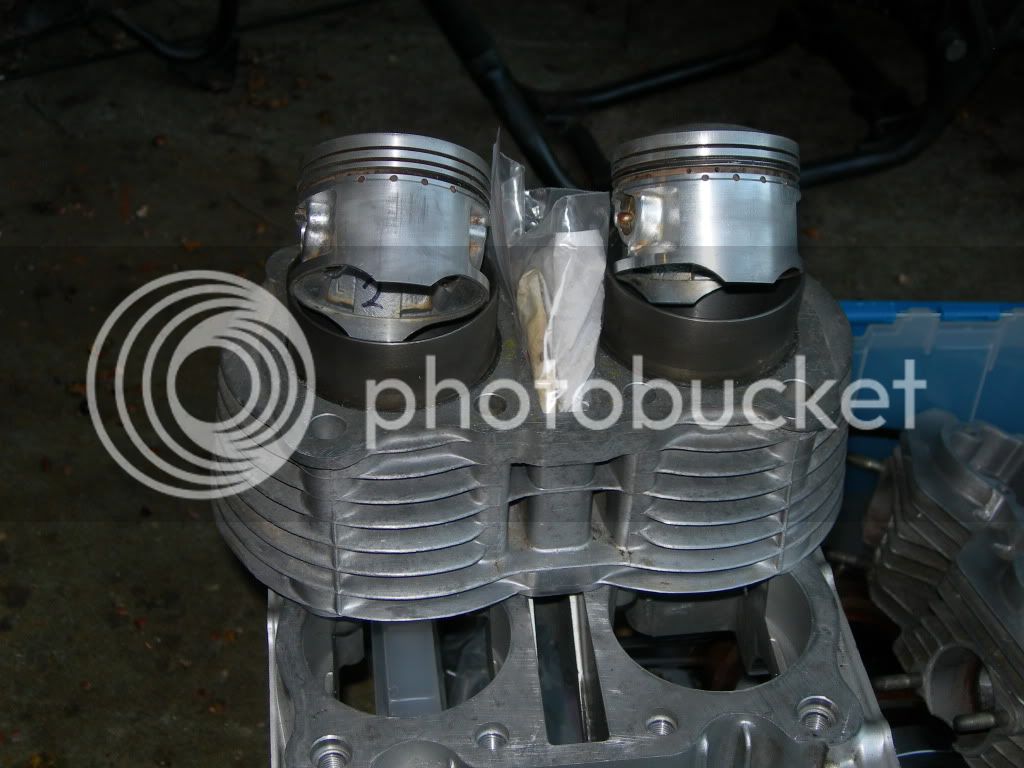 3. 2mm oversize pistons. Cylinder has been bored but not honed to size
Click to expand...

what piston to wall clearance did you bore to and what clearance to finish to after the hone?

I read through the thread a few weeks ago, but honestly, 54 pages long...it's a bit of work to find specific info to just this part of the build. I have been running through google, and EVERY thing I come across about the GS850 pistons has a response where someone says you've done and posted details. But I can never find a good, clear writeup on just that mod. This thread is the best I've been able to find.

Have you done any sort of tech article on just the big bore mod? I'd be interested in seeing something with the details of how you did it. Piston selection, rings, gaskets, what got machined (heads, cylinder base.head mating surface) any head mods, etc.

Heck, I'd even help as yours is probably together and mine is ready to get started to step by step before and after pics can still be taken.

DTT SUPPORTER
The GS850 pistons are pretty much a straight swap. They have a slightly higher deck height than the CB360 pistons, so make sure you don't take too much, if any, metal out of the stack. Other than that, you're just boring the cylinders to accept them.

Sonreir said:
The GS850 pistons are pretty much a straight swap. They have a slightly higher deck height than the CB360 pistons, so make sure you don't take too much, if any, metal out of the stack. Other than that, you're just boring the cylinders to accept them.
Click to expand...

seems I've read about shaving the head .025"? also, will pretty much any vanilla gasket set work? I may be remembering wrong, but I thought I saw something where PJ said to use other gaskets either for the head or base. I've also seen some folks talk about doubling up a gasket to maintain p-to-v clearance.

DTT SUPPORTER
Email Lani at Copper Gaskets Unlimited. You won't be able to use stock head gaskets after boring the cylinders 2mm over. I would skip shaving the head until after you complete your clearance checks. It's a lot harder to add metal back on than it is to take more off (ask me how I know).

Sonreir said:
Email Lani at Copper Gaskets Unlimited. You won't be able to use stock head gaskets after boring the cylinders 2mm over. I would skip shaving the head until after you complete your clearance checks. It's a lot harder to add metal back on than it is to take more off (ask me how I know).
Click to expand...

which is why I have 3.5 motors in the garage and haven't sold any of them yet. Easier to pull a part off another motor than add metal ;D

timberwolffxdl said:
which is why I have 3.5 motors in the garage and haven't sold any of them yet. Easier to pull a part off another motor than add metal ;D
Click to expand...

Yeah, he made a copper gasket for me too.

I still have the GS850, you want me to drag it down to Florida in Oct?

Had a fun afternoon making and fixing electronic stuff.
Modified my soldering iron to have low and high power (cut lead, fitted a lamp switch and a bridging diode, when 'OFF" AC goes through diode and cuts power by roughly half. Couldn't get accurate temps as tip is so small but it looks like 500+f to less than 300f. 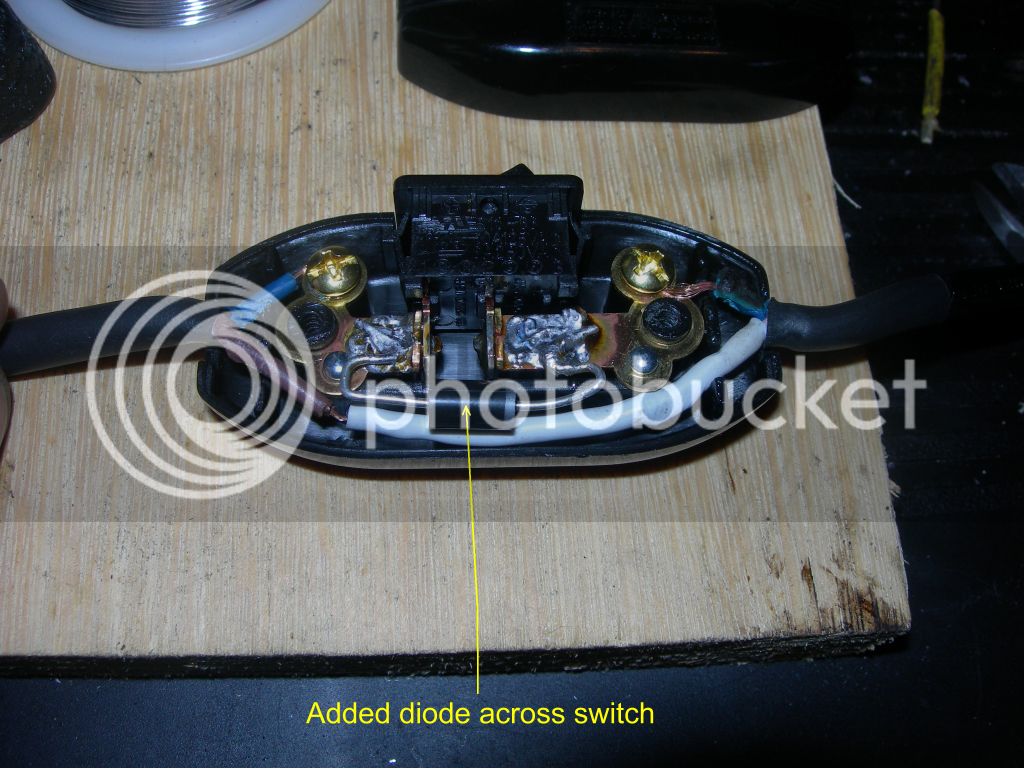 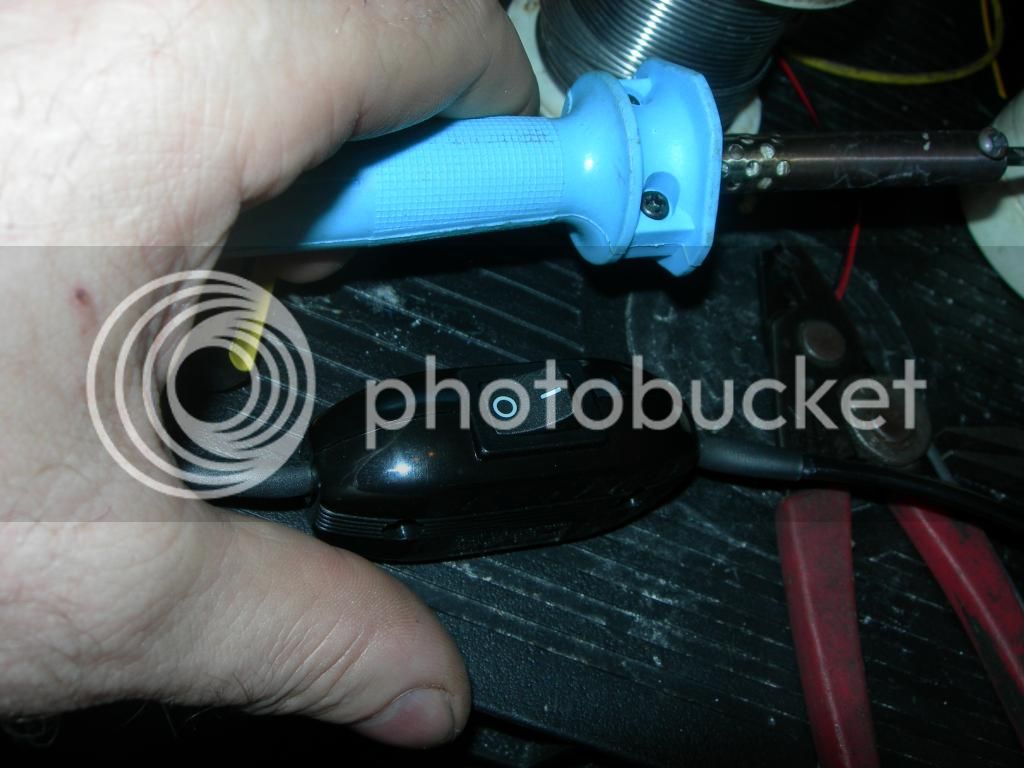 Then I repaired an LED running light, all 3 LED's were burned out
It was probably 9~10 volt being run on 12~14 volt.
I cut copper track and fitted a resistor so it now works fine up to 13.7 volts.
Original LED's were 3mm but there is room for 5mm, may have to modify lens (when I find it ;D ) 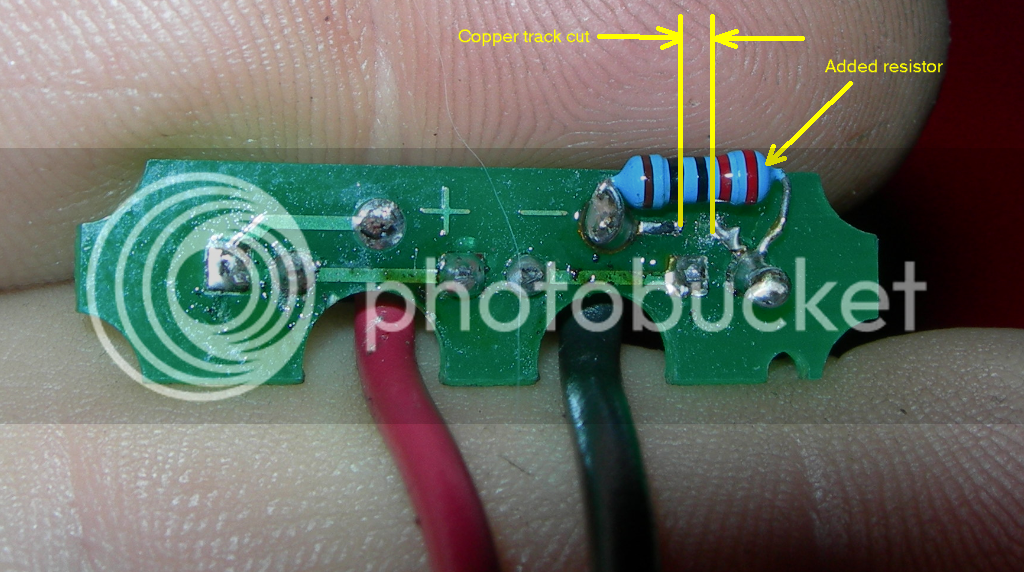 The circuit board is probably about an inch long, picture is enlarged a few times ;D 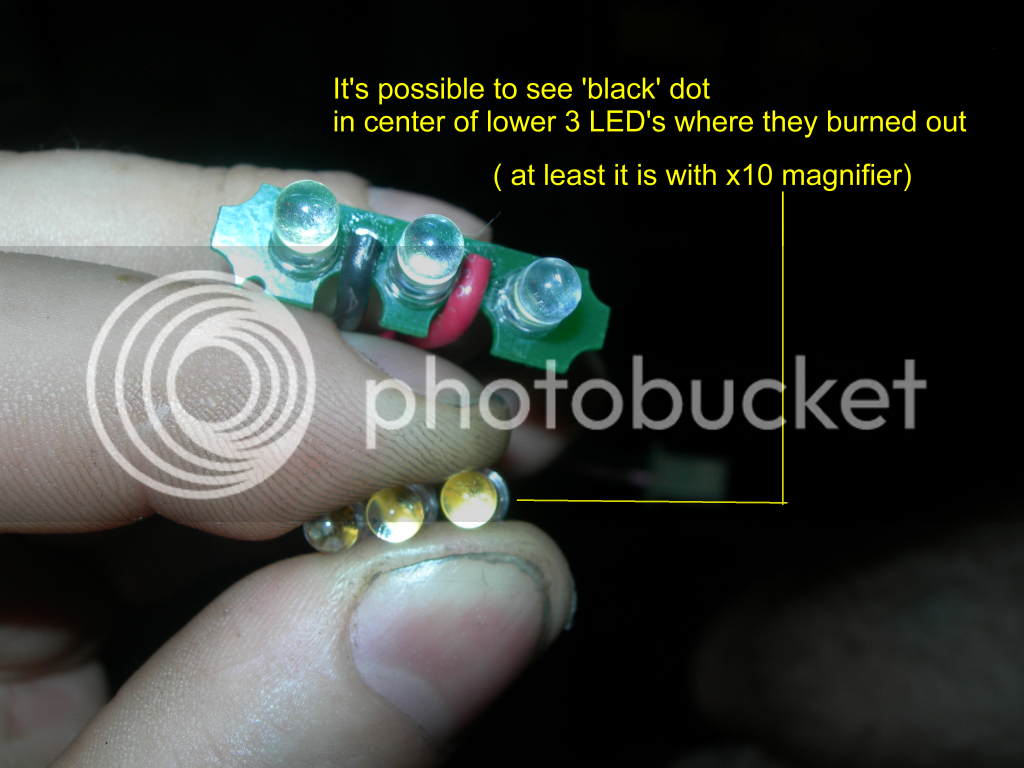 After that I removed clear LED's from some instrument lights I bought and fitted superbright amber LED's in place (with correct resistors) plus fitted new leads to the 'neutral' light (green LED, wires were only held on by the heat shrink tube :
My first actual foray into electronics that worked exactly as expected 8) ;D
All simple enougth stuff but I needed to do something I could actually finish for a change

Forgot to mention, also picked up a right side footrest hanger for a CB400f to fit on 'Blue Bike'.
Moves footrest back about 3"~4" not as radical as full on rearsets 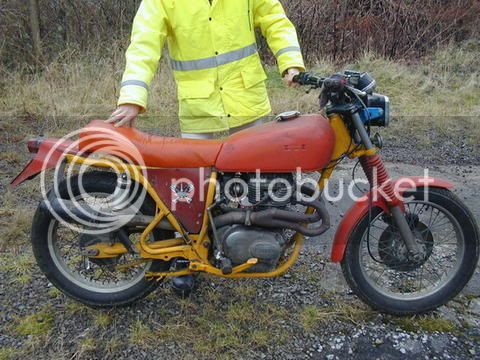 Heading over to all the forums I post in, I want it back